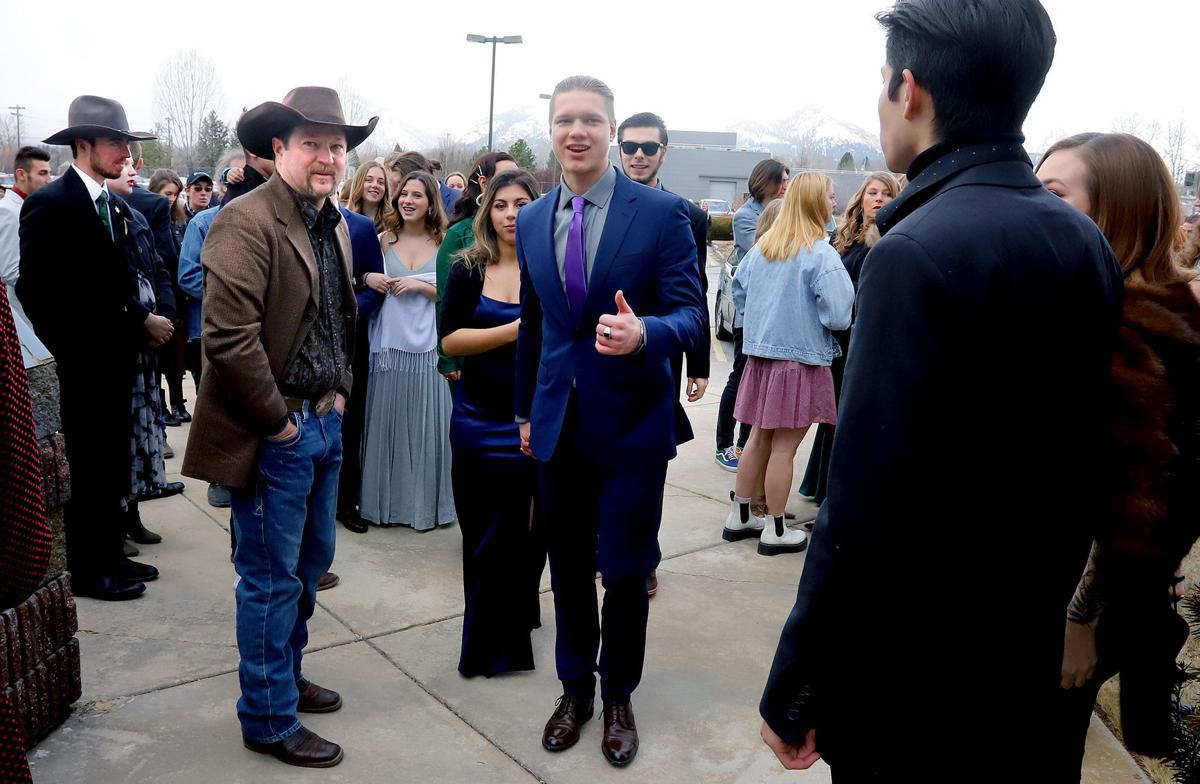 Hamilton's Luke Valimont and Nick DeBoer make their way through the crowd outside Hamilton's Pharaohplex Cinema on their way to the red carpet screening of their film "Trail of Justice" Saturday morning. Several hundred people attended the event. 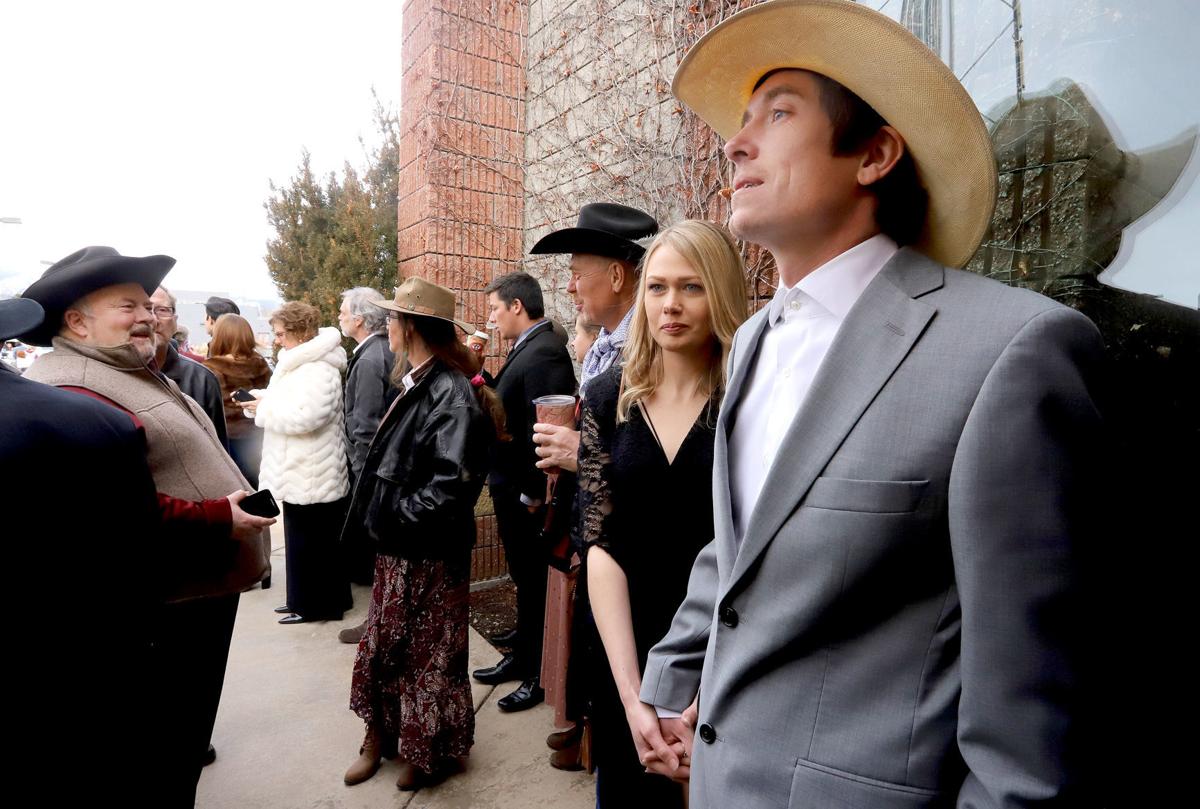 Erik Cantrell and Stephanie Dedmore wait for their chance to walk the red carpet at Saturday's screening of the "Trail of Justice" at Hamilton's Pharoahplex Cinema. Cantrell helped with film as a horse wrangler and in a minor part that included him falling off a horse after being shot in the back by an arrow. "I ended up having to fall off that horse like 16 times to get the shot," Cantrell said. "It was a lot of fun and a lot of work. I've been waiting for two years to see. I've been watching the trailer over and over again." 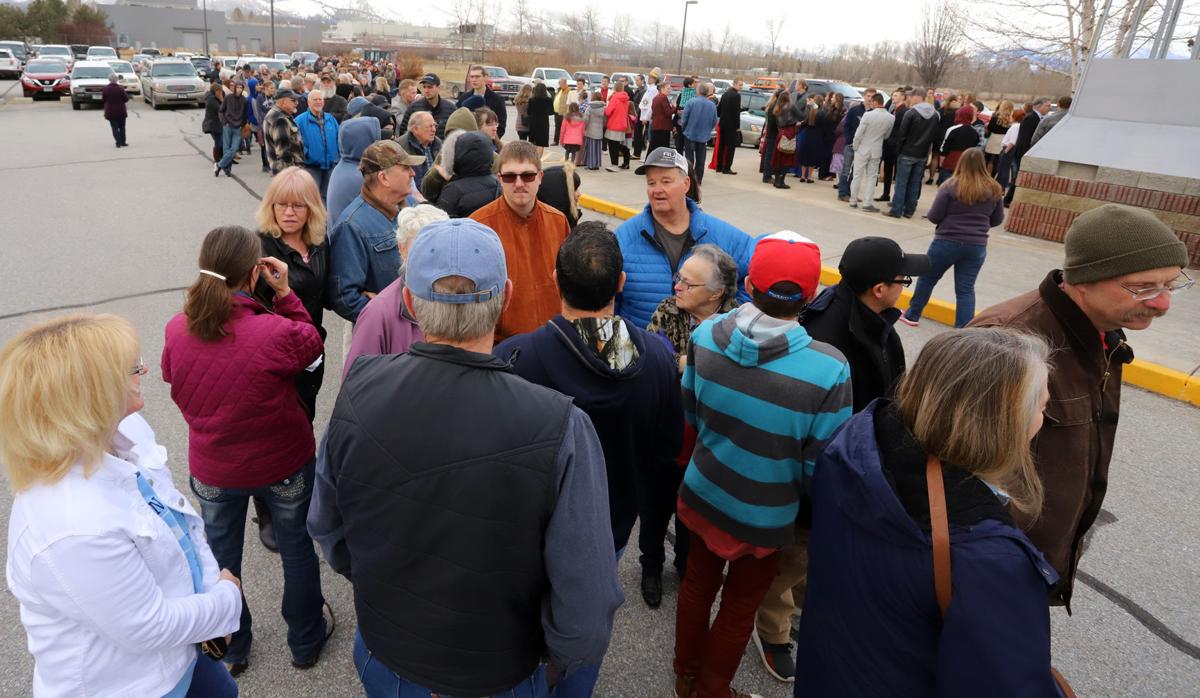 Hundreds lined up Saturday morning for a chance to see the first screening of "Trail of Justice," a Western directed and produced by three young Bitterroot filmmakers, Nick DeBoer, Luke Valimont and Christian Jessop.

Chad Zander made certain he wasn’t going to miss the first screening of the Bitterroot-based western “Trail of Justice.”

Two hours before the free showing of the movie was set to run, Zander staked out his place at the front of the line at Hamilton’s Pharaohplex Cinema.

“I knew a lot of the actors from church,” Zander said. “I wanted to make sure that I was going to get in.”

While no one ended up being turned away, by the time the doors finally opened the line stretched back almost to the end of the theater’s parking lot.

The movie’s director, Nick DeBoer, and co-producers and actors Luke Valimont and Christian Jessop, couldn’t have been happier with the turnout for the production they’ve spent the last three years of their young lives working on.

Beautifully filmed entirely in Montana with the help of hundreds of volunteers from the Bitterroot and beyond, the Western takes place in the 1800s as it follows four cowboys whose lives take a dark turn when tragedy strikes. Told in the family-friendly fashion of old-time Western movies, its story is one of justice, revenge and forgiveness.

Steve Jarvis of Hamilton played the lead role of the movie's complicated villain.

Jarvis played a minor part in the young men’s first Western several years ago and was sufficiently impressed with their talents that he invested in this second film and agreed to play a bigger role.

The 56-year-old businessman with offices in Hamilton, Missoula and Chicago said he’s been acting his whole life in one form or another as part of his career, but this was something different.

For one thing, it involved horses.

“My wife and daughter are the horse people in our family,” Jarvis said. “I can ride, but I’m not a horse person. There was this scene where everyone else on a gelding. They put me on this crazy mare that was trying to kill me. I had to jump off and then I forgot all my lines. I just started screaming gibberish at people.”

Jarvis was impressed with both the professionalism and ingenuity of the three young filmmakers and their desire to create something that could be enjoyed by the entire family.

“They wanted to do a movies that are clean and wholesome,” he said. “They’re not filled with sex or with everyone dropping bad language. There’s a lot of shooting and cowboy stuff. It has a lot of Old Testament kind of violence. It’s just a good old-fashioned Western.”

The fact the three want to focus their filmmaking in Montana is the perfect match for that genre.

“We live in the best movie set every created,” Jarvis said. “It’s such an awesome opportunity to show those Old West values that are really important to a lot of people.”

Larry Garcia of Hamilton has known Valimont since he moved the Bitterroot Valley. A native of Lodgegrass, Montana, and member of the Crow Tribe, Garcia said Valimont reached out to him early in hopes of finding Native Americans interested in playing roles in the movie.

His grandmother, mother and uncles have played roles in other films, including "Little Big Man," starring Dustin Hoffman. Garcia was impressed by the filmmakers’ desire to portray Native Americans in a positive way.

“They have a heart for Indian people,” Garcia said. “They didn’t want the typical Hollywood portrayal of Indians riding around the wagons. I was super honored that he would ask us to be involved. It’s huge for us Natives to get our culture out there in a positive way.”

The Native Americans in the movie responded by bringing their own regalia and language. Garcia said he used the same pattern of war paint that his great-grandfather, White Man Runs, wore as a scout for Custer at the Little Big Horn battle.

“That was pretty cool,” he said. “There was nothing Hollywood about it.”

Steve Roberts of Hamilton was the filmmakers' first investor, and helped them launch the project to create a full-length film.

“I saw their first work and was impressed by their drive and talent,” Roberts said. “I, and others, encouraged them to take a shot to show their talent and perhaps launch a career they would be passionate about. … I’m thrilled to see these young men and women attack such a difficult project and see it through to completion.”

Montana Film Office Commissioner Allison Whitmer attended Saturday’s screening and was impressed by the large number of people — both young and old — who turned to support the young filmmakers who had been awarded a Big Sky Film Grant to pay for the project.

“It’s exactly the kind of audience that you want,” Whitmer said. “It’s a shared community experience.”

The Big Sky Film Grant is awarded to Montanans looking to make films in the state, which is exactly the goal of the three Bitterroot-based filmmakers of “Trail of Justice.”

“I’m looking forward to seeing what they will come up with next,” Whitmer said.

Robert Cantrell of Stevensville loaned the trio some of his horses that he uses as part of his Hidalgo Trail Rides based at Lolo Hot Springs in the summer. He and his son, Erik, both wrangled the horses and played small parts in the movie.

“I got to ride a horse fast,” Cantrell said. “In one scene, I was dressed as an Indian and rode through a town shooting at people. It was fun.”

Cantrell also gained a whole new respect for Westerns that include a large group of riders, with some being shot from their horses. He helped stage those scenes for this film.

Somewhere between 200 and 300 people, mostly from the Bitterroot, volunteered their time to help produce “Trail of Justice.” Many attended Saturday's showing to see the final result.

As the credits rolled at the end, Cantrell pointed up toward the screen as his name flashed there.

And when the lights came on, he said: “I really liked that.”

The filmmakers want to do a few more screenings in Montana and hope the film will be accepted in international, national and state festivals.

“It was just awesome that this many people showed up today to watch our film,” Jessop said.

Safety or habitat? Woody debris on the West Fork of the Bitterroot creates conundrum

Leave your chainsaws in the truck when you float the West Fork of Bitterroot. That’s the message that a newly formed task force of federal, state, county and private groups are hoping to spread this spring before the annual spring hatches bring another crop of rafts and drift boats to the popular fishery.

The Bitter Root Humane Association is preparing for the construction of an estimated $3.5 million shelter in Hamilton after recently settling a lawsuit with neighbors.

Fans of the Bitterroot’s Valley first cygnets hatched in the wild in recent memory will be happy to learn they weren’t part of the seven recently found dead near a pond in Bozeman.

Ravalli County stores see run on hand sanitizer and face masks as people prepare for the potential of the novel coronavirus in the Bitterroot Valley.

“We now offer live dance bands every Saturday night with no cover charge,” Barry Schlecht said. “We’ve tried different genres. While country is obviously the most popular, Joan Zen draws people in like crazy too. Once a month, she and her band play here.”

The Corvallis School Board Trustees voted unanimously to offer Jon Konen of Great Falls the position of superintendent this week.

Buck N' Dave's Eggs focus will be on producing brown-shell colored eggs from the flock of chickens that will spend a good part of their day roaming around the two acres next to the old dairy barn.

Hamilton's Luke Valimont and Nick DeBoer make their way through the crowd outside Hamilton's Pharaohplex Cinema on their way to the red carpet screening of their film "Trail of Justice" Saturday morning. Several hundred people attended the event.

Erik Cantrell and Stephanie Dedmore wait for their chance to walk the red carpet at Saturday's screening of the "Trail of Justice" at Hamilton's Pharoahplex Cinema. Cantrell helped with film as a horse wrangler and in a minor part that included him falling off a horse after being shot in the back by an arrow. "I ended up having to fall off that horse like 16 times to get the shot," Cantrell said. "It was a lot of fun and a lot of work. I've been waiting for two years to see. I've been watching the trailer over and over again."

Hundreds lined up Saturday morning for a chance to see the first screening of "Trail of Justice," a Western directed and produced by three young Bitterroot filmmakers, Nick DeBoer, Luke Valimont and Christian Jessop.