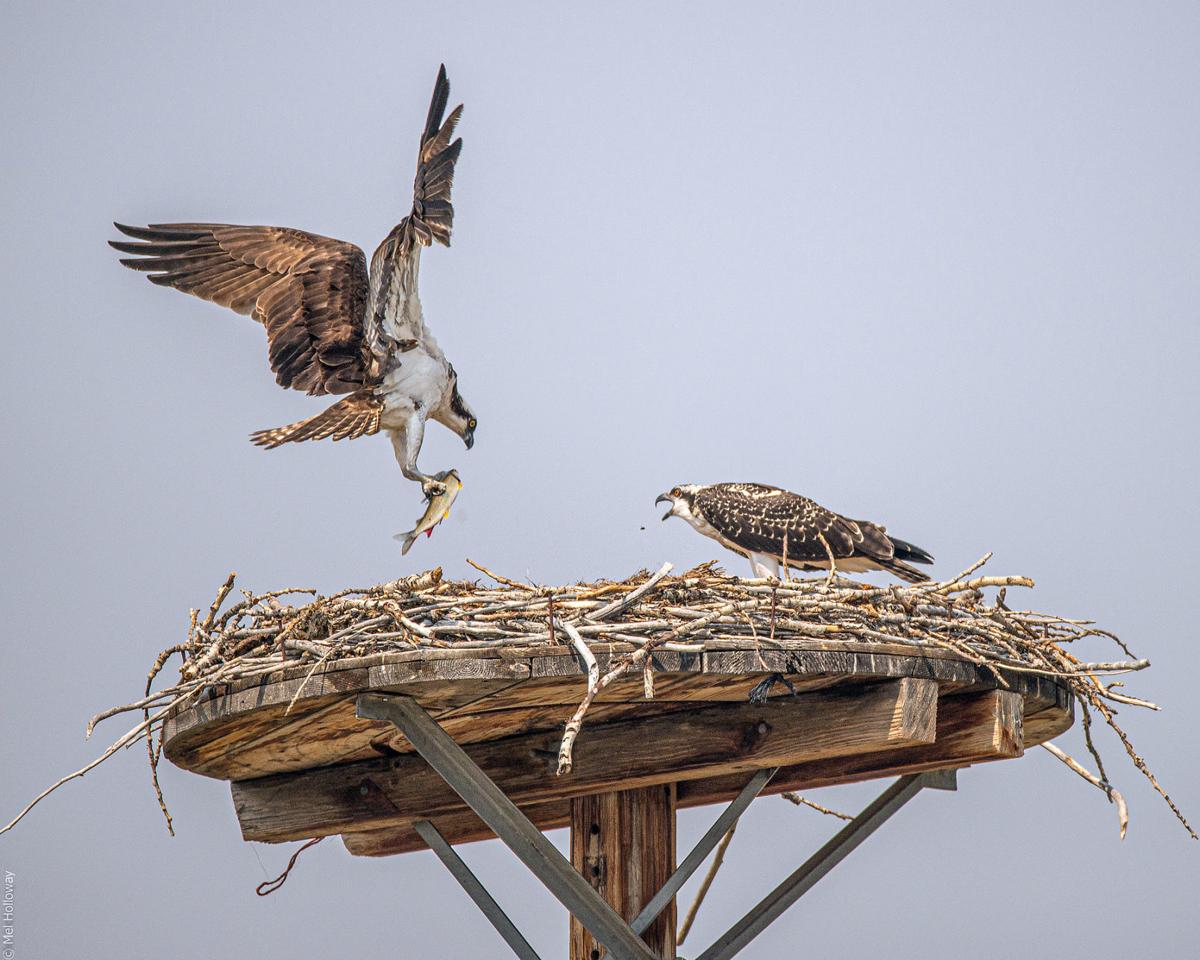 An osprey delivers a fish to a nest. Ospreys are a conservation success story, increasing in population over the last 50 years, largely due to the prohibition of pesticides like DDT. According to the Cornell Lab of Ornithology, ospreys, in some areas, especially coastal populations, completely disappeared in the '70s due to eggshell thinning caused by pesticides. 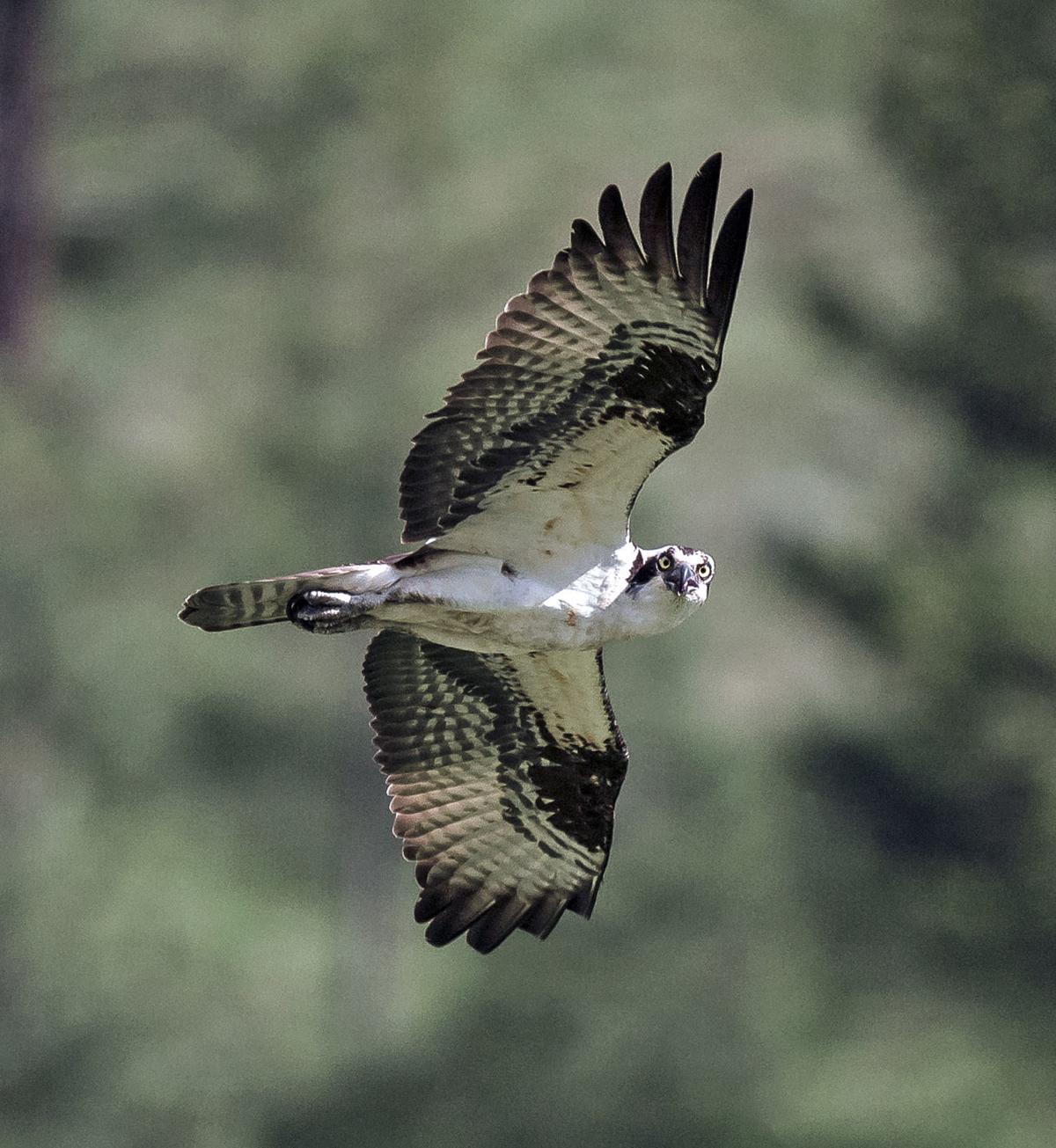 Ospreys are a one-of-a-kind North American raptor that focuses exclusively on feeding on live fish.

Now that September has passed, I felt it fitting to write about ospreys as they are likely on their annual migration to areas in the southern U.S and Mexico. By mid-October these beautiful birds of prey will be on their way out of the Bitterroot, leaving behind an abandoned nest and a small dent in the Bitterroot fish population.

You can bet that their migration path and wintering grounds far to the south will have two things in common with habitat here in the Bitterroot — water and fish.

This raptor is one of a kind in North America, exclusively feeding on live fish. While bald eagles love to fish, they will resort to eating decaying fish while ospreys will not, preferring instead fresh fillets.

Ospreys typically return to the Bitterroot in April and quickly begin adding sticks to their selected nesting site which they may use over and over for years.

A common sight in osprey nesting range is a man-made nest structure affixed atop an abandoned power pole. These structures have a few cross beams upon which the osprey pair can begin their nest construction. During the nest-building period, watch the birds as they swoop down and pluck off a small branch to add to the nest. All too often the stick drops to the base of the structure which eventually resembles a packrat nest on the ground.

A common hazard that people feeding hay bales to livestock need to be aware of is that ospreys have a propensity to pick up nylon baling twine to use as nesting material. Unfortunately, that twine can becomes a death sentence to the osprey as they get tangled in the twine and are unable to free themselves. A lesson for all is never leave nylon baling twine on the ground. Store or dispose of it properly.

Each spring, the male will arrive first and begin improving the nest site so when the female arrives it will not be long before one to four eggs will be deposited. During incubation, the female typically relies on the male to bring her fish as she rarely leaves the nest.

In about 32 days, the first osprey chick will hatch and begin immediately growing from the rich protein food their parents bring to the table. The other chicks hatch at a staggered rate which leaves them often smaller and pushed around by the first hatched sibling.

Ospreys are quite successful at catching fish. They have a preferred size limit due to the need to remain airborne once they captured their prey but I have seen several osprey struggling as they lifted off a pond with a two-plus pound rainbow trout, only to drop their prized catch.

I once found a large flopping trout on my backyard lawn that no doubt fell from the talons of an Osprey as it flew from a nearby pond to its nest. Ospreys will fly 100 feet plus over a water body in search of fish.

Once spotted, an Osprey will make an impressive dive, a big splash, and disappear under the water for a moment, only to reappear and take flight with its catch. After the catch, Ospreys usually stall for a second and shake their feathers in the air to remove excess water, similar to a dog when it shakes its coat after a plunge. Very skillful at snatching fish out of the water, ospreys quickly adjust a rear talon on each foot to face backward similar to owls with two talons front and two in the rear carrying the fish headfirst to reduce wind resistance in flight.

Ospreys are a conservation success story, increasing in population over the last 50 years, largely due to the prohibition of pesticides like DDT. According to the Cornell Lab of Ornithology, ospreys, in some areas, especially coastal populations, completely disappeared in the '70s due to eggshell thinning caused by pesticides. Thankfully, these birds rebounded and today the Bird Conservation Organization, Partners in Flights, estimates the global population of over 500,000 breeding pairs. That is quite a success story, ensuring this summer visitor will be around in the Bitterroot for years to come.

Sam Lawry, Teller Wildlife Refuge executive director has 35 plus years in the wildlife conservation profession. His contributions to the Ravalli Republic are intended to share some of that knowledge of wildlife in the Bitterroot with the community. If you would like more information about Teller Wildlife Refuge please visit our website at www.tellerwildlife.org.

While I often observe small birds chasing larger birds from their territory or nesting site, one bird, in my opinion, tops the list as the mos…

As I drove down the main entrance road to Teller Refuge, I stopped to watch a small dove size bird hovering above the two-foot vegetation only…

Bitterroot Buffleheads: A common duck that some call the butterball

Scientific Latin names for waterfowl species have always intrigued me.

Having spent many hours in the woods in Iowa, I have a clear recollection of the unmistakable call of the eastern blue jay.

An osprey delivers a fish to a nest. Ospreys are a conservation success story, increasing in population over the last 50 years, largely due to the prohibition of pesticides like DDT. According to the Cornell Lab of Ornithology, ospreys, in some areas, especially coastal populations, completely disappeared in the '70s due to eggshell thinning caused by pesticides.

Ospreys are a one-of-a-kind North American raptor that focuses exclusively on feeding on live fish.