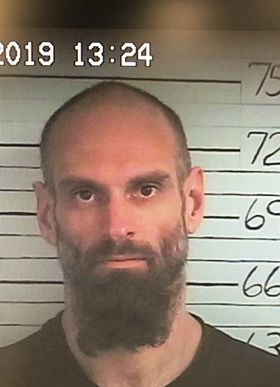 Ravalli County Sheriff Steve Holton is urging residents to keep their doors locked and the keys to their vehicles put away as a manhunt for a Hamilton man continued into its second day.

Law enforcement officers are searching for Justin Johnson, 40, after he fled the Soft Rock and Willow Creek areas yesterday after the stolen vehicle he was driving ran into a tree. Johnson is 6’4”, 160 pounds, with brown eyes and hair. and has tattoos on his back, hand and arms.

“Right now, we don’t have anything new,” Holton said at about 1 p.m. Friday. “I doubt that he’s in the same area at this point. I think there’s a good chance he got out of there and got a ride.”

The incident started Thursday in the early afternoon after Johnson was spotted allegedly shoplifting at the Super One grocery store in Stevensville.

When he left the scene, a surveillance camera captured him getting into a pickup truck that was stolen a couple of weeks ago from a construction site, said Holton.

A Montana game warden spotted the white truck east of Corvallis. When he attempted to make a traffic stop, Johnson turned up Soft Rock Road and “the race was on,” Holton said.

With law enforcement in pursuit, Johnson drove the truck into a tree and the vehicle was stuck. He, a woman passenger and a dog took off running.

Holton said Johnson was just far enough ahead of the officers that he made it over the top of a ridge and disappeared. The officers tracked him for a while but ended up establishing a perimeter and calling in the Two Bear Air helicopter from Kalispell to aid in the search.

The helicopter spotted the woman and the dog. She was taken into custody.

Holton said that while Johnson has a long history with law enforcement in Ravalli County, none of it has been violent.

“I would like to tell people it’s time to lock your doors and don’t leave your keys in your car,” Holton said. “I think he would steal a car if he had the chance.”

“I don’t want anyone to approach him,” Holton said. “He won’t just give up. I don’t want him to get backed into a corner. We’ll get him. We always do.”

A Florence woman was arrested Tuesday on felony drug charges after someone reported that she was acting suspiciously at the Florence Town Pump.

We can deliver obituaries to your email. Sign up here.