The Latest: Sanders: Democrat with most delegates should win 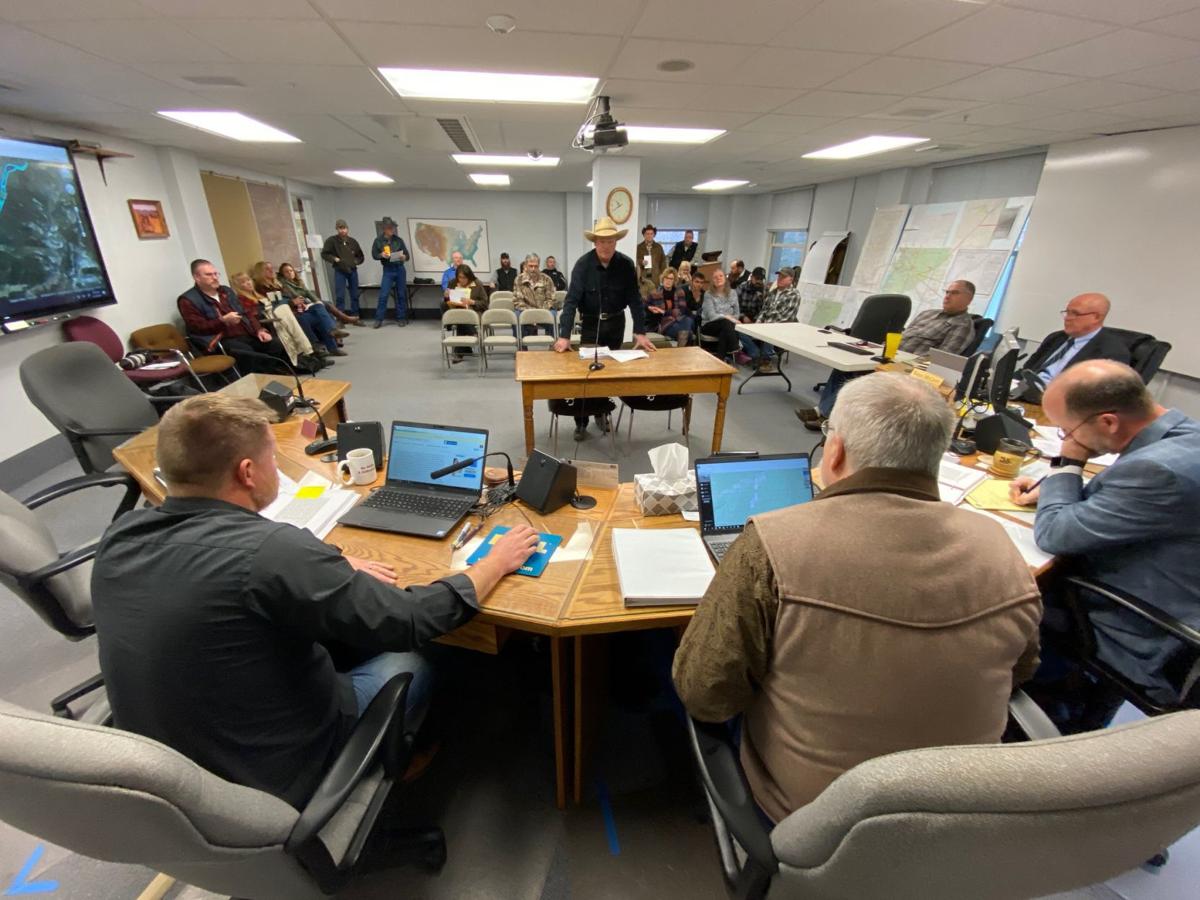 Following a five-hour-long meeting Friday, the Ravalli County Commission decided to wait another 90 days before deciding whether a gate on Hughes Creek Road will be removed. 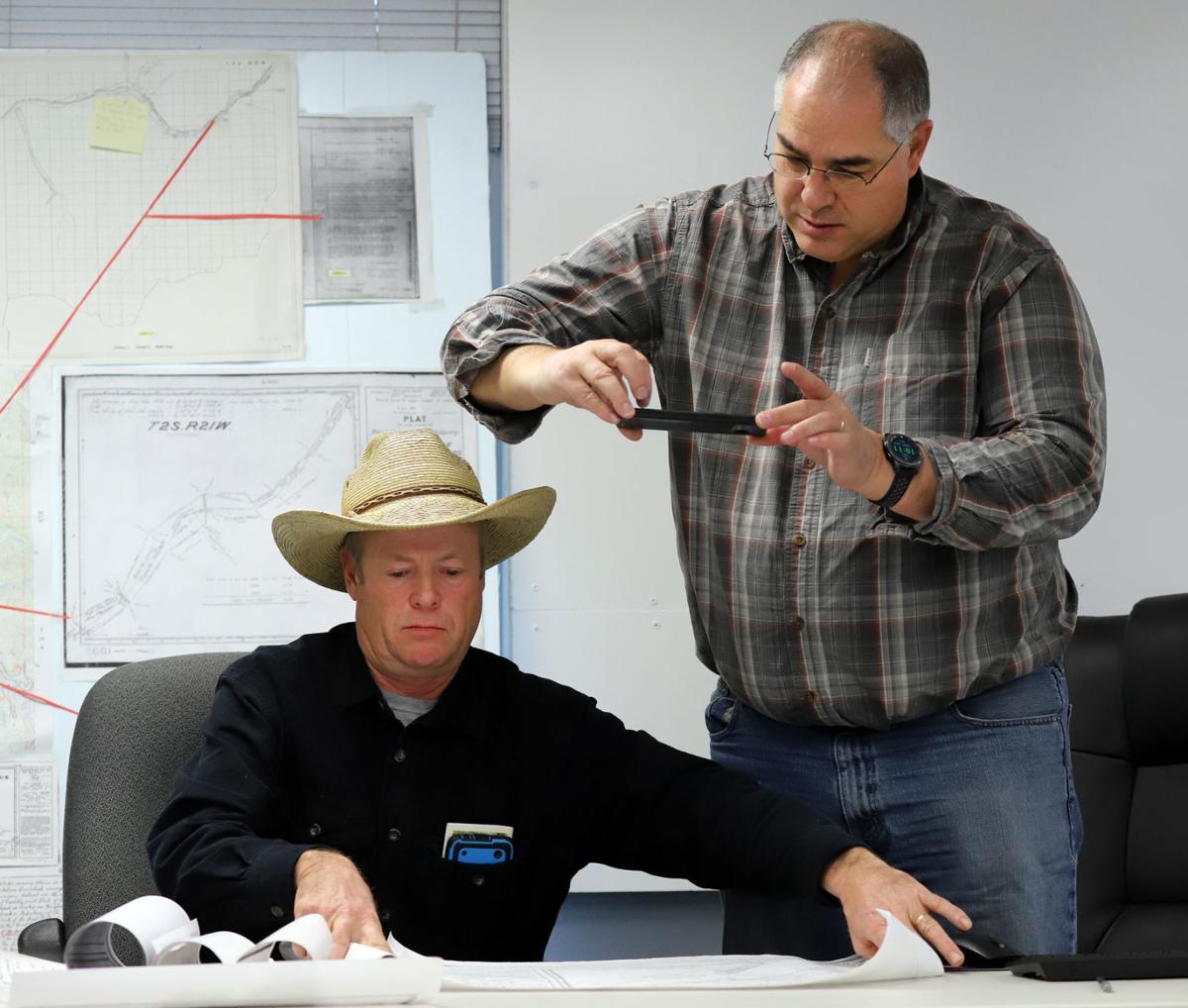 Ravalli County Planning Department Administrator Terry Nelson snaps a photograph of one of several patented mining claim plats that Hughes Creek landowner Jay Bugli showed the Ravalli County Commission Friday. Bugli said the plats were recorded after a county road petition for Hughes Creek was filed. The plats did not show any roads on the mining claims.

Following nearly a five-hour-long and sometimes heated meeting Friday, the Ravalli County Commission again pushed back its decision on whether a controversial gate on the Hughes Creek Road needs to come down.

After being presented with new documents, including 1900s-era patented mining claim plats that raised new questions about the road’s historic location, the commission opted to give landowners another 90 days to consider their next legal move.

In the interim, either the commission or Rep. Theresa Manzella, R-Hamilton, will seek a state attorney’s general’s opinion on whether a patented mining claim supersedes a county’s claim on a county road.

Close to 30 people attended the meeting, including a member of the Real Three Percent of Idaho. "Three Percenters" are groups that view the federal government as overreaching, and take their name from their belief that only 3% of colonists fought against the British in the Revolutionary War.

Many of those in attendance argued that the county should take the new evidence into account and reconsider its decision that found the county road was 11.8 miles long from its junction with the West Fork Road, which included about 2.8 miles beyond the locked gate.

The commission said a county attorney's opinion precluded that option.

In response to questions from the commission about holding an additional hearing to accept new evidence or reverse its current decision, Ravalli County Attorney Bill Fulbright said the commission didn’t have the authority to do that under state law in his Oct. 31 opinion.

“I understand that the landowners may not want to file a petition that looks like that because they did it before and they got bit by it,” McCarty said. “My advice to the commissioners is we can only discuss this right now. They can not make a different determination in this hearing.”

Hughes Creek landowner Jay Bugli presented the commission with several documents that he and others have located after the commissioners made their ruling on the road, including patented mining claim plats that were obtained from records stored in Washington, D.C. The plats were dated after the petition that created the county road. The plats did not show any road easements.

Under an 1872 mining law, Bugli said patented claims are protected under federal law and the county doesn’t have any jurisdiction over the claims.

“If you continue to insist upon removal of the gate, you open yourself to not only a claim unconstitutional violation of federal patent law, but also a Fifth Amendment takings claim without compensation,” Bugli told the commission. “It will require months, if not years of court filings and arguments, but we are confident that in the end, we will prevail and taxpayers of Ravalli County will be on the books for thousands or millions of damages.”

Bugli also offered additional documents that were obtained from the county courthouse attic that had been under quarantine due to a bat infestation until recently.

He said the documents showed the Alta post office was located in several different places, including one that showed it was two miles down the road from the location the county used in deciding where the county road ended.

Bugli received support from those in attendance.

“I’m pretty sure that it’s not a county road based on the documents that came from Washington, D.C.,” said Stevensville resident Debra Jossi. “Whether it's federal law or county law, you guys didn’t have the right to determine it in the first place. … They got drug into this and have now spent tens of thousands of dollars fighting something that they shouldn’t have been fighting.

“I think it should be reviewed again by the county attorney,” Jossi said. “As a taxpaying citizen, I can have Joe Blow approach these guys and end up in the same quagmire that they’ve ended up fighting over three years on something that shouldn’t have been issued in the first place.”

Considering the new information it heard Friday, Idaho Three Percenter Eric Parker asked the commission to consider leaving the gate where it stands and let the people who initially protested file the next lawsuit.

“Why put it back on the property owner? Why not, with the backing of your legislator, say, ‘This is clear as mud,’” said Parker, whose hat read “Kill a commie for mommie.”

“Say we have no idea of where the road is supposed to be … and we’re not going to remove the gate," he said. "If there’s some other entity out there that disagrees with that, let them be the one to initiate these ongoing costs and litigation. Let them one be on the hook for paying for that.”

Commissioner Greg Chilcott said the decision to decline the landowner’s application to abandon the road wasn’t an easy one for the commission, but state law does not allow counties to abandon a county road that provides access to public lands, which the Hughes Creek Road did.

“I believe I don’t like the decision I had to make,” Chilcott said. “I also believe … that I have an oath to follow and I follow the law. When I have a law that is one that is as clear-cut as the one on the board, I believe I have to follow it.”

“At the end of the day, I think we have an obligation to follow the law,” Chilcott said.

Commissioner Chris Hoffman said the commission has given the landowners time to work through the legal process and has not pushed for the immediate removal of the gate.

“If there was some grand plot to take or make a taking from these folks, to somehow supersede their rights to private property and their constitutional rights … it seems like to me we would have gone out and pulled that gate the hard way and enforced it right away,” Hoffman said. “We didn’t do that. We haven’t done that and no one is talking about it today.

“We’re your neighbors,” he said. “We’re not some unreachable wall of bureaucracy that sits here to make your life miserable. We’re just like you. We pay taxes. We live here. We esteem the constitutions of the United States and the State of Montana.

"We’re not here to take your land away from you. Anybody who comes in from outside and says that is full of it," Hoffman said. "That’s not the case. You guys need to decide how you want to approach in some means that allows this body that needs to make a decision.”

“This whole process would be a lot easier if there weren’t conspiracy theories being thrown around out there — that somehow the commissioners are in cahoots with the Forest Service and some new world order to take over Hughes Creek in Ravalli County, Montana," said Commissioner Jeff Burrows. "If we could just sit down and let’s figure out what an adverse claim is, I think we can get to a point that makes sense.”

A state prosecutor was granted a fifth extension this week in filing a response to former Florence physician Chris Christensen’s appeal of two negligent homicide convictions and 20 drug-related charges.

Fate of Hamilton’s historic St. Francis of Assisi Church on the block again

The future of Hamilton’s historic St. Francis of Assisi Church will back in front of Hamilton’s Zoning Board of Adjustments Monday, Dec. 16.

For the second time in two years, a 52-year-old Hamilton woman convicted in a 1987 murder faces charges that could send her back into the state corrections system.

Exit Realty paid nearly $15,000 to cover all school lunch accounts in Ravalli County that were past due as of Dec. 2.

Before a full house of more than 100 people, the Hamilton Board of Adjustments began taking public input Monday evening that it will use to shape its decision on the fate of one of the town’s most historic churches. Their decision is not going to be an easy one.

The owners of a Hamilton vape shop say they plan to resist — but not with guns — the state’s decision to implement emergency rules banning the sale of flavored vaping products.

Following a five-hour-long meeting Friday, the Ravalli County Commission decided to wait another 90 days before deciding whether a gate on Hughes Creek Road will be removed.

Ravalli County Planning Department Administrator Terry Nelson snaps a photograph of one of several patented mining claim plats that Hughes Creek landowner Jay Bugli showed the Ravalli County Commission Friday. Bugli said the plats were recorded after a county road petition for Hughes Creek was filed. The plats did not show any roads on the mining claims.