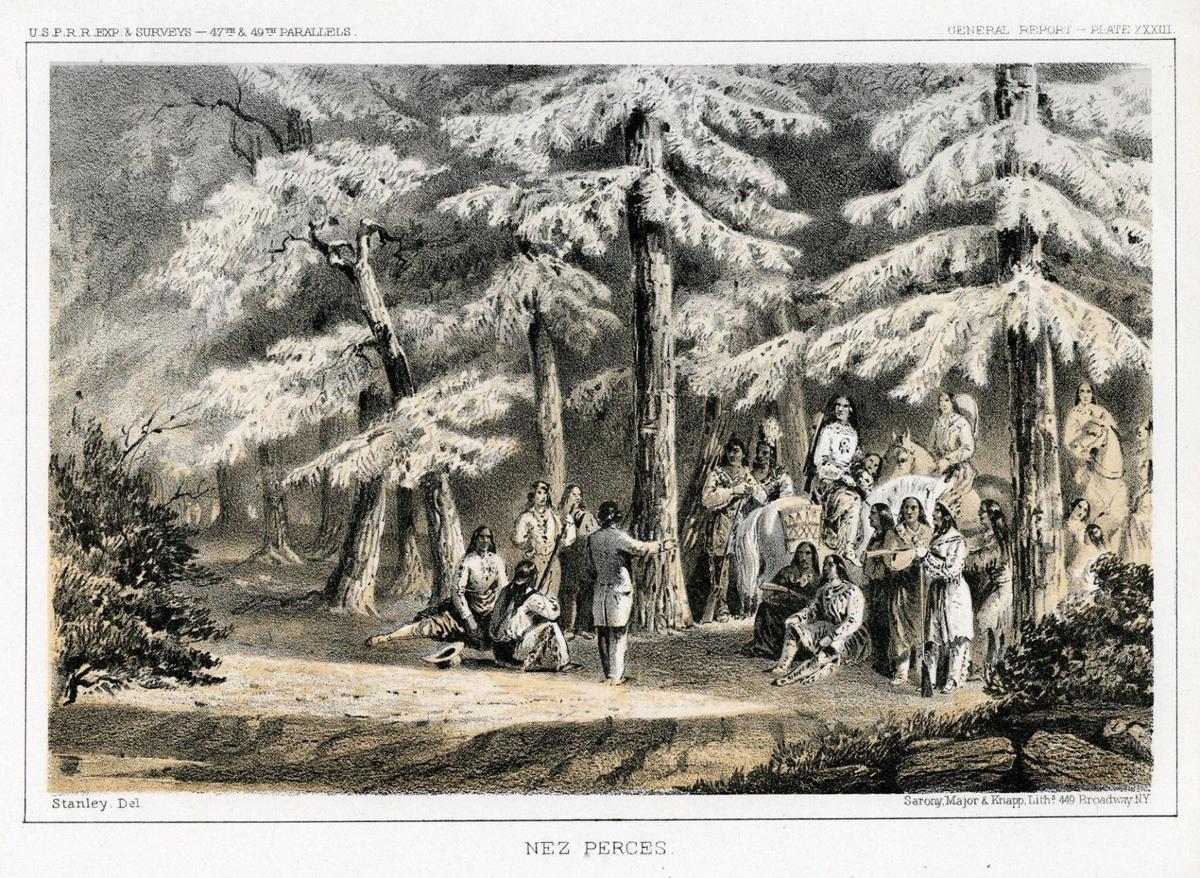 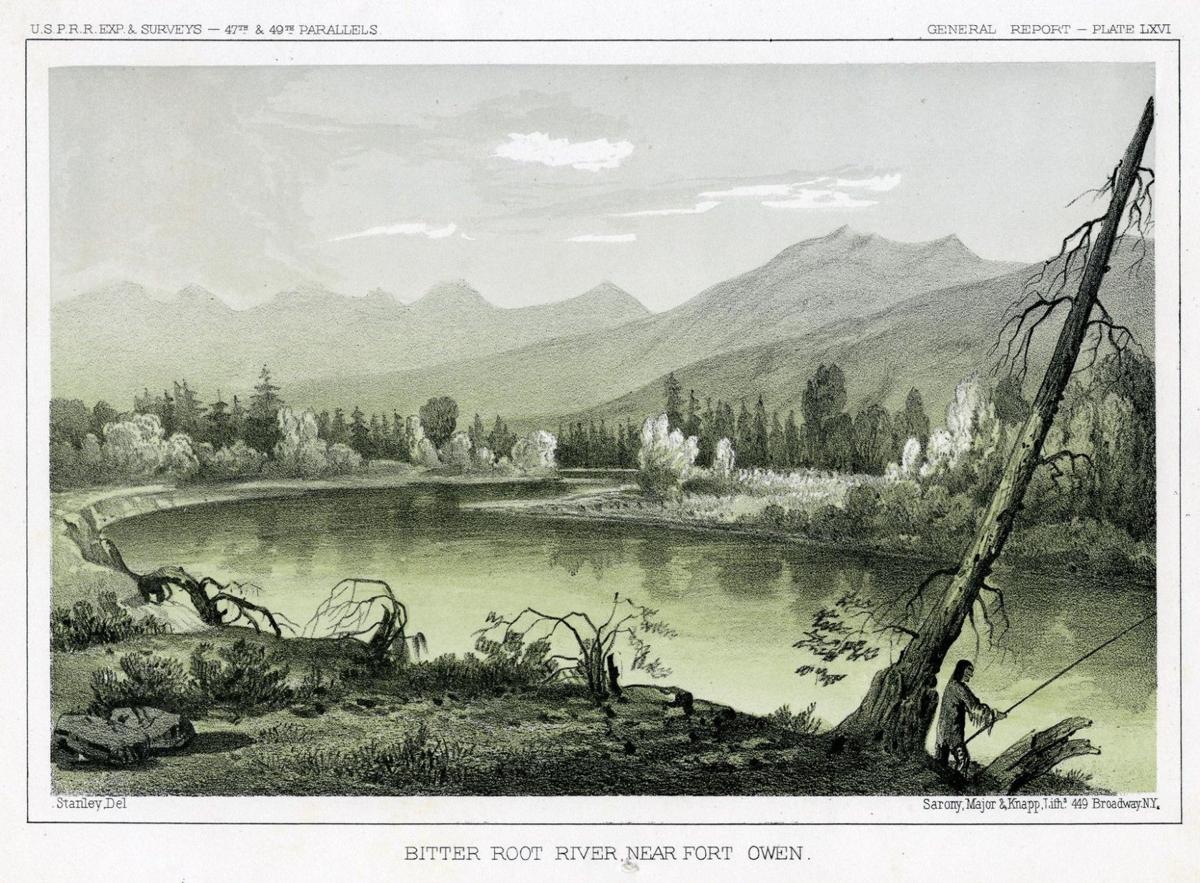 One of the more challenging obstacles confronting the U. S. Pacific Rail Road Survey was in providing adequate provisions for an expedition of such magnitude and scope.

The job of transporting supplies to the rendezvous site at Fort Owen in the Bitterroot Valley, fell into the capable hands of Lieutenant Rufus Saxton.

Saxton’s journey began on the 5th of May 1853, in New York. From New York City he booked passage on a ship to the Isthmus of Panama, and after crossing overland from the Atlantic coast to the Pacific, he continued his journey on board another vessel setting sail for the port of San Francisco. Arriving in California on the first day of June, Lt. Saxton attempted to recruit the essential men and materials needed for his mission.

Almost the entire month of June was spent procuring equipment for the expedition. As far as the task of recruiting men went, he wasn’t quite as successful.

In his report to Governor Stevens, who led the main expedition westward, Saxton admitted “the abundance of gold in California, and the consequent high price of labor, made it very difficult to procure men for the expedition, even at the highest rates. But for the assistance afforded by the Hudson’s Bay Company, I should have been unable to organize a party at all. I applied to Governor Peter Ogden, the chief factor of the company, for aid, which he very readily granted. It is worthy of remark, however little flattering to American pride, that the power of that company over the inhabitants of the country over which I traversed is greater than that of the government of the United States. Even the Quartermaster’s department is obliged to depend on them for the transportation of troops and army supplies.”

It’s interesting to note that the most powerful influences on the west coast at that time were the lure of gold, and the Hudson’s Bay Company, especially when you consider that a number of American settlers living in the Willamette Valley of Oregon had been petitioning the U.S. government for territorial status since 1843.

Oregon was eventually established as a territory in 1848, and yet five years later, according to Lieutenant Saxton, an English fur trading company still controlled the movement of American troops and provisions for the entire region. Fortunately, the Hudson’s Bay Company proved to be very accommodating to the railroad survey crews throughout the duration of the expedition.

All of what is now western Montana was part of the Oregon Territory from 1848 until 1853, when it was then incorporated into the newly formed Washington Territory, to which President Franklin Pierce appointed Isaac Ingalls Stevens as governor. It was July when the men and supplies actually started moving up the Columbia River on their way to the Bitterroot Valley.

Saxton says that the company depended entirely on the good graces of the local Indians who provided them with the necessary horses, even amidst rumors that the soldiers were fitting up a war party against them. The animals they received from the wary Natives were still wild and unaccustomed to packing heavy loads, which caused a further delay in the transporting of their goods. By the third week in July the supply unit had reached the John Day River, where their dehydrated animals plunged headlong into the river before the men could get the packs off of their backs. Unfortunately, the troupe lost some of their precious supplies in the process.

Meanwhile, the temperature stood at 106 degrees in the shade, and Saxton complained that the packsaddles he had procured in San Francisco were of an inferior quality and so poorly manufactured that they injured the backs of the horses. Near Walla Walla the party met with a large band of Nez Perce Indians who had come to ask why they wished to travel through their country with so many men and horses.

The Nez Perce had heard the rumors of war that were flying ahead of the slow moving caravan, and wanted to pass judgment on the situation for themselves. Saxton told them the true nature of his mission, and smoked the pipes of peace with them, promising that he meant no harm to any Indians, and wished only to promote a lasting peace amongst all the western tribes. Within a week the entire scenario was repeated when the party met a band of Spokane Indians who had heard the same unjustified rumors of war.

Saxton said “the Indians passed the night with us, and in the evening danced a war dance, in which some of our men joined, and manifested a decided talent for that sort of gymnastics. At this place I met Mr. Owen, who, with his brother, had spent several years at St. Mary’s Village, engaged in raising stock and trading with the Indians. They have at length abandoned the place, deeming it unsafe to remain longer on account of the Blackfeet Indians. They are encamped about fifteen miles from us with all their stock, on their way to Oregon. Our coming will enable them to return and re-establish their trading post.”

A few days later, accompanied by Francis B. Owen, the expedition came into contact with a large band of Pend d’Oreille Indians. The Indians were just returning from a successful hunt on the Missouri, and were heavily loaded down with buffalo robes and dried meat from their excursion. According to Lt. Saxton “they were perfectly civil, and seemed to feel proud, rich, and independent. They report that a large party of white men are coming from the east, to make peace with the Blackfeet.”

Though Saxton felt their statements were vague and unsatisfactory, the Indians had accurately reported the facts. Several separate divisions of the railroad expedition were gradually approaching from the east, promoting the same message of peace to all of the Indian nations they met along the way. By now many of Saxton’s animals were giving out, and a good portion of the supplies had been lost along the treacherous route.

Wasps and hornets stung the horses, sending them into frantic stampedes through the thick forest, damaging packs and animals in the process. To make things even worse, the grass had been recently burned and no feed could be found along the trail, which meant that they had to spend more time looking for proper forage for their stock of animals. The weather continued hot and dry, and many of the men “took a silent vow never to work for Uncle Sam again.”

Lieutenant Saxton acknowledged the fact that at seven dollars a month, the soldiers were poorly compensated for the extreme hardships that they were expected to endure. It was late summer when the pack train finally came into the Missoula Valley, and on the 28th of August they arrived at St. Mary’s Village, which at that time was located just west of Fort Owen.

Saxton gives us a good description of the scene as he found it. “St. Mary’s or Flathead Village is situated near the western base of the Rocky Mountains, on the St. Mary’s Fork of the Bitter Root River. It was laid out by the Jesuit missionaries, and completed by its present occupant, Mr. Owen. The Flatheads have a considerable village of log cabins around Fort Owen, and own a large number of cattle. They are now absent on a hunt across the mountains. St. Mary’s is at present deserted by the priests, to whom the Indians are indebted for much of the knowledge and many of the comforts of civilized life, which they enjoy. I saw a considerable amount of wheat, just harvested, and they have also eggs, milk, potatoes etc.”

Even with all the setbacks along the way, Saxton’s party had arrived a full month before Governor Stevens eventually made his way to St. Mary’s Village. In order to preserve the remaining provisions, Lieutenant Saxton sent most of his men back to Fort Vancouver along the northern Nez Perce Trail. Another small group was left in charge of the goods stored at Fort Owen, which Saxton described as “something over two thousand rations to leave in depot for Governor Stevens’s party, together with sixty-five disabled horses, and a quantity of ammunition and quartermaster property.”

On the 2nd of September Saxton set out to cross the Continental Divide, continuing his journey eastward towards Fort Benton on the Missouri River. He had a guide named Antoine Plante, and seventeen men with him. He says that he would have taken fewer men “but Antoine, entertaining his old dread of the Blackfeet, refused to accompany me with any fewer men. He is an old mountaineer, and his services are invaluable. The companions of our long and weary march, from who we separated at this place, gave us three hearty cheers as we parted from them, they would have willingly gone on with us, but the scarcity of provisions would not permit it.”

After crossing the divide on September 8th, Saxton met up with a group of surveyors who were coming from the east, and he noted that they all instantly “felt the plan of our operations had been successful, and the object of the expedition accomplished, as a party from the Atlantic, and one from the Pacific, each in search of the other, had met after traversing thousands of miles of unknown country, at the foot of the great dividing ridge between the oceans.” The two parties spent the day in camp, celebrating their reunion.

When the U.S. Pacific Rail Road Survey was organized in 1853 by an act of Congress, two men were selected to fill the position of civil engineers for the examination of the northern route.

The 1850s were a time of great innovation and accomplishment, and in many ways the decade signaled the true opening of the American west.

Sod forts of the Bitterroot Valley

In 1877, a controversial treaty with the United States government forced the Nez Perce people to give up their homeland in Eastern Oregon and …

The lure of the Birch Creek Shaman

The Birch Creek Valley lies just south of the Lemhi Valley, and is connected by a wide-open bench known as the Gilmore Divide. The valley itself is high and wide, and hemmed in partially by the southern end of the Beaverhead Range on the east, and the Lemhi Range on the west.

Drawing a line in the sand

The way we communicate says a lot about who we are and why we do the things we do. I’m not sure that the pen is actually mightier than the sword, but oftentimes a few firmly written words of warning can serve to avert an unnecessary act of aggression.