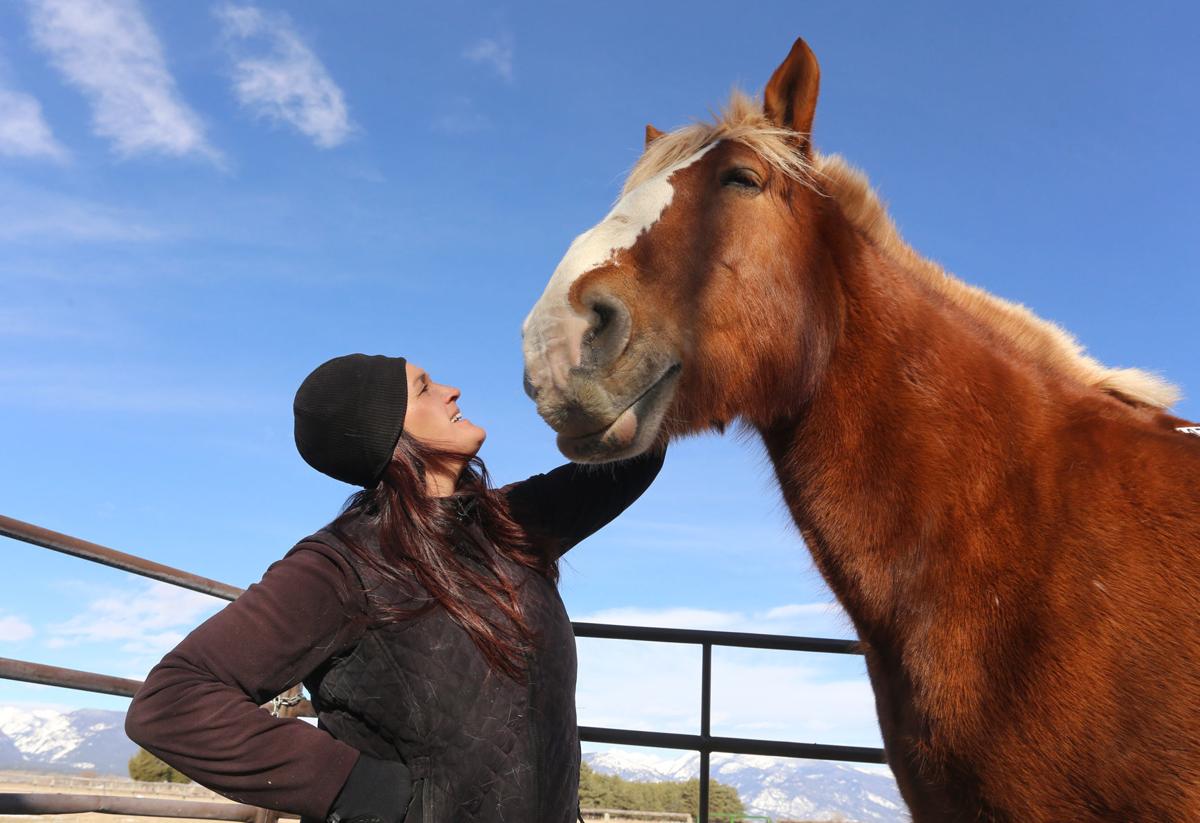 Jasmin Shinn enjoys a few minutes with Tiny, the Belgian draft horse that she recently brought home from the Billings auction. Without her intervention, the horse would have been sent to a feed yard before being transported out the country to be slaughtered. 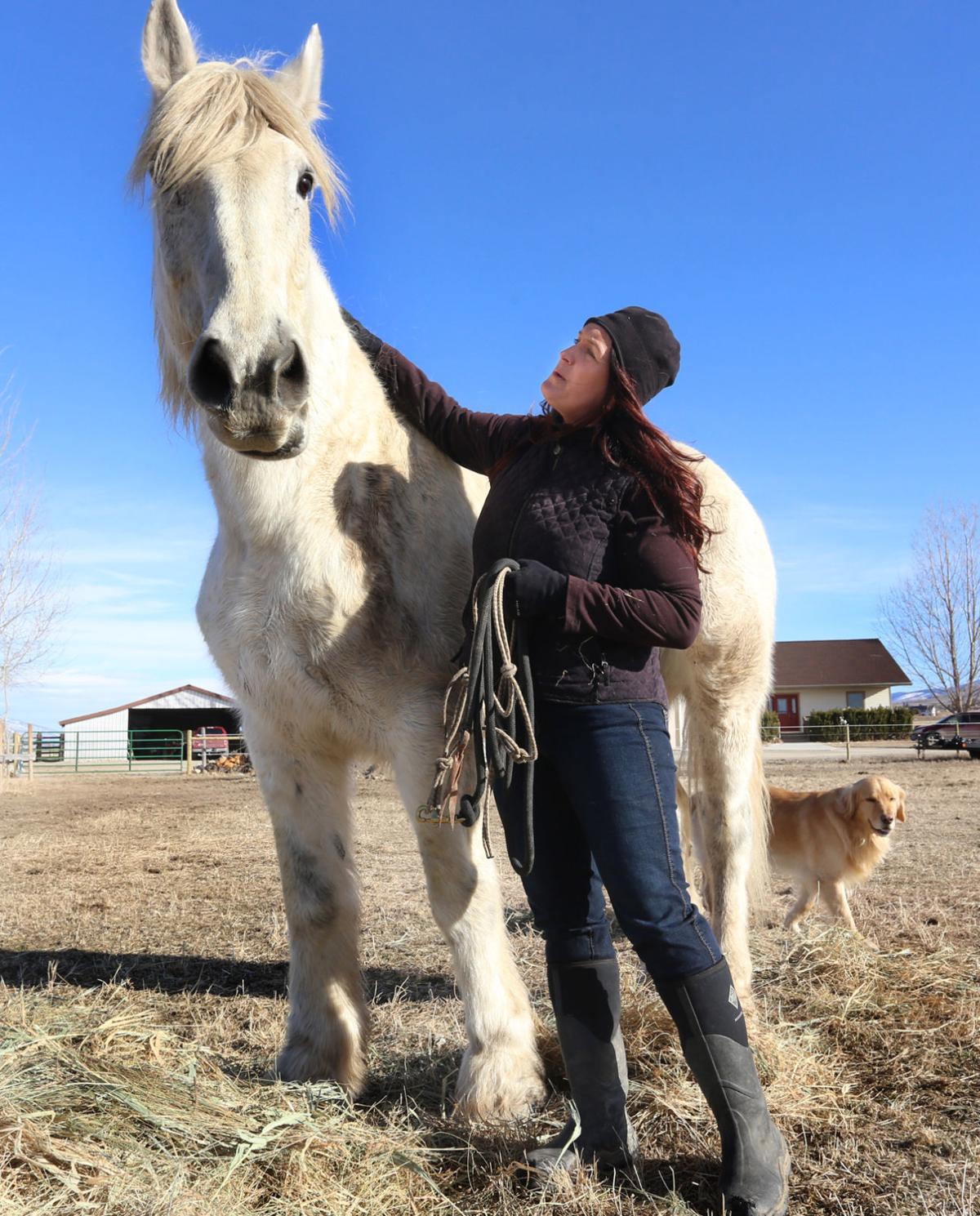 Jasmin Shinn says hello to Clay, a Percheron/Tennessee walker cross that has been on her Corvallis farm since 2015. 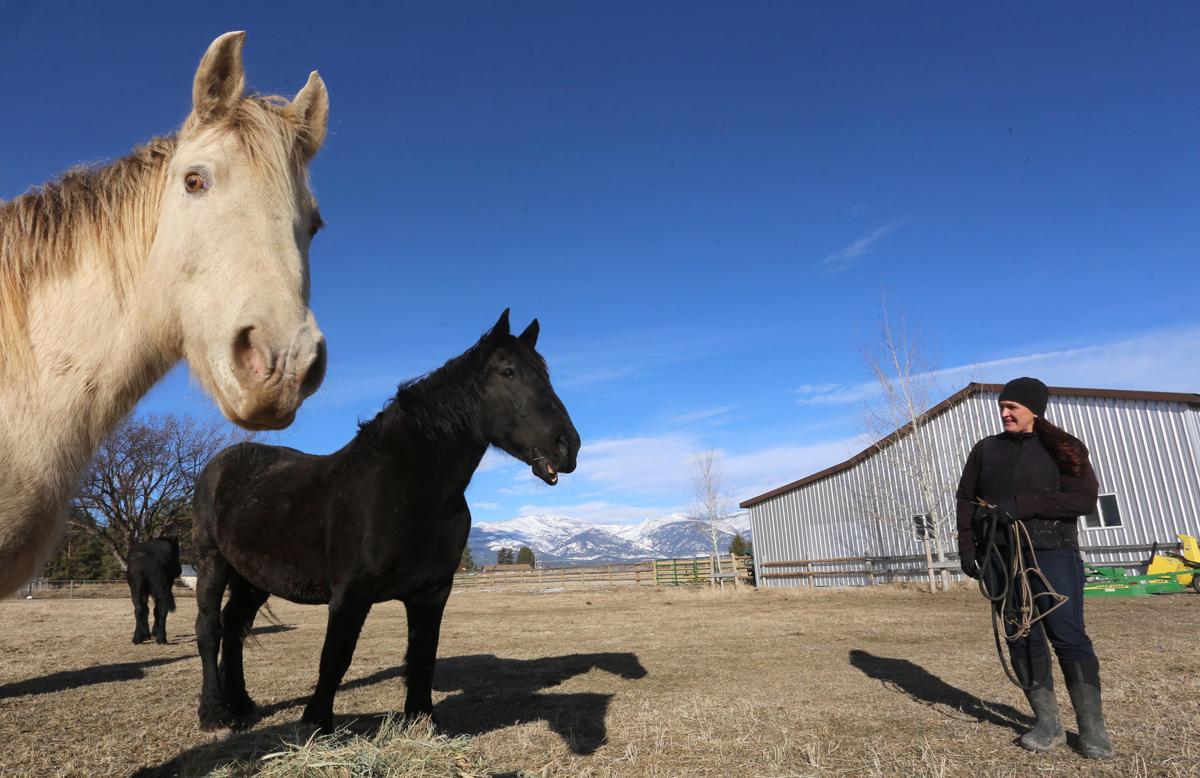 Jasmin Shinn of Corvallis looks over three of the draft horses that she has rescued over the past couple of years.

The horse she calls Tiny puts a totally different spin on that planet.

Towering over her by a good 2 feet, the gentle giant nuzzles her cheek as Shinn smiles and returns the kiss.

It’s only been a week since fortune smiled on the rawboned Belgian at an auction in Billings, where a horse buyer had unnerved the Corvallis woman who operates a fledgling nonprofit draft horse rescue operation.

She had traveled to Billings with the hope of bringing the 1,450-pound Tiny home with her.

Shinn sidled up to the buyer to ask him what he planned to do with the horse if he was able to outbid her at the auction.

“His exact words to me were, ‘I’m going to chop his head off,’” Shinn said.

The buyer was there to purchase horses that would be shipped to a feed yard where they would be fattened before being shipped across the border to Canada or Mexico to be slaughtered.

“That was something I wasn’t going to let happen,” she said.

Tiny ended up in her trailer at the end of that day.

Shinn’s introduction to traveling in a horse-powered cart came as a girl growing up in small town in Germany. Her family knew a woman who used ponies to pull her cart around the area.

“She let us drive the ponies,” Shinn said. “It was something I never forgot. It’s where I first fell in love with horses.”

Shinn and her husband moved to the Bitterroot Valley three years ago after he retired from the military. At the county fair a year later, she happened to stop by a local draft horse and mule club’s event that featured the big horses doing what they do best.

“I really fell in love with draft horses right then and wanted to find out everything I could about them,” she said.

One of the things she learned was there isn’t a huge market for the large horses. When their owners can no longer afford to keep them, they often end up at auction, purchased by “kill buyers.”

Shinn decided she was going to do what she could to find new homes for those she could afford to help.

She founded One Horse at a Time Draft Horse Rescue in 2017. The rescue officially became a nonprofit in January.

Shinn has been rescuing draft horses and nursing them back to health since 2015. She has already adopted five of her own.

As of last week, Tiny was the only horse available for adoption. Shinn is currently working out the logistics for bringing home a second 8-year-old Belgian named Chunk that had found its way into a kill pen in Colorado.

She’s not after numbers.

“I know that I can’t have too many,” she said. “We don’t have room here or the money for that.”

When someone does step forward to adopt one of the huge horses, Shinn wants to be certain she knows what the horse is capable of doing and that its new owners understand the challenges they might face.

“I try to find out as much as possible about the horse before I offer it to someone,” Shinn said. “I want to make sure that it’s going to be a good match. These horses can eat a ton of hay a month. It’s important that people know that.

“I never want to find one of these horses at an auction again,” she said.

If people can’t adopt a horse, Shinn said there are other ways to help. She encourages them to visit her website at www.1horseatatime.com to learn more.

“I know that I can’t save them all,” Shinn said. “But I do know that I can make a difference in the lives of a few horses that don’t have any other hope. I can give them a second chance before they get shipped off to slaughter.

“I think this is what I was meant to do,” she said. “All I have to do is look at them to know that. They are so huge, yet so gentle. They are just a joy to be around.”

The Bitterroot Valley’s real estate market continued its rebound in 2017 with homes selling a bit faster and for more money.

Joshua "Teague" Rutherford remembers feeling the drill in his mouth as the dentist worked on his tooth.

No food, lodging at Glacier's Sperry complex this summer

KALISPELL — Hikers heading to the Sperry Chalet area in Glacier National Park this summer won’t find the popular fresh-baked cookies and ice-cold lemonade at their destination, and chances are visitors will be camping rather than staying in a backcountry dormitory for at least the next two years.

LAS VEGAS — The incoming bishop for the Catholic church in Las Vegas says supporting immigrants and advocating for gun control will be among his top priorities.

Jasmin Shinn enjoys a few minutes with Tiny, the Belgian draft horse that she recently brought home from the Billings auction. Without her intervention, the horse would have been sent to a feed yard before being transported out the country to be slaughtered.

Jasmin Shinn says hello to Clay, a Percheron/Tennessee walker cross that has been on her Corvallis farm since 2015.

Jasmin Shinn of Corvallis looks over three of the draft horses that she has rescued over the past couple of years.