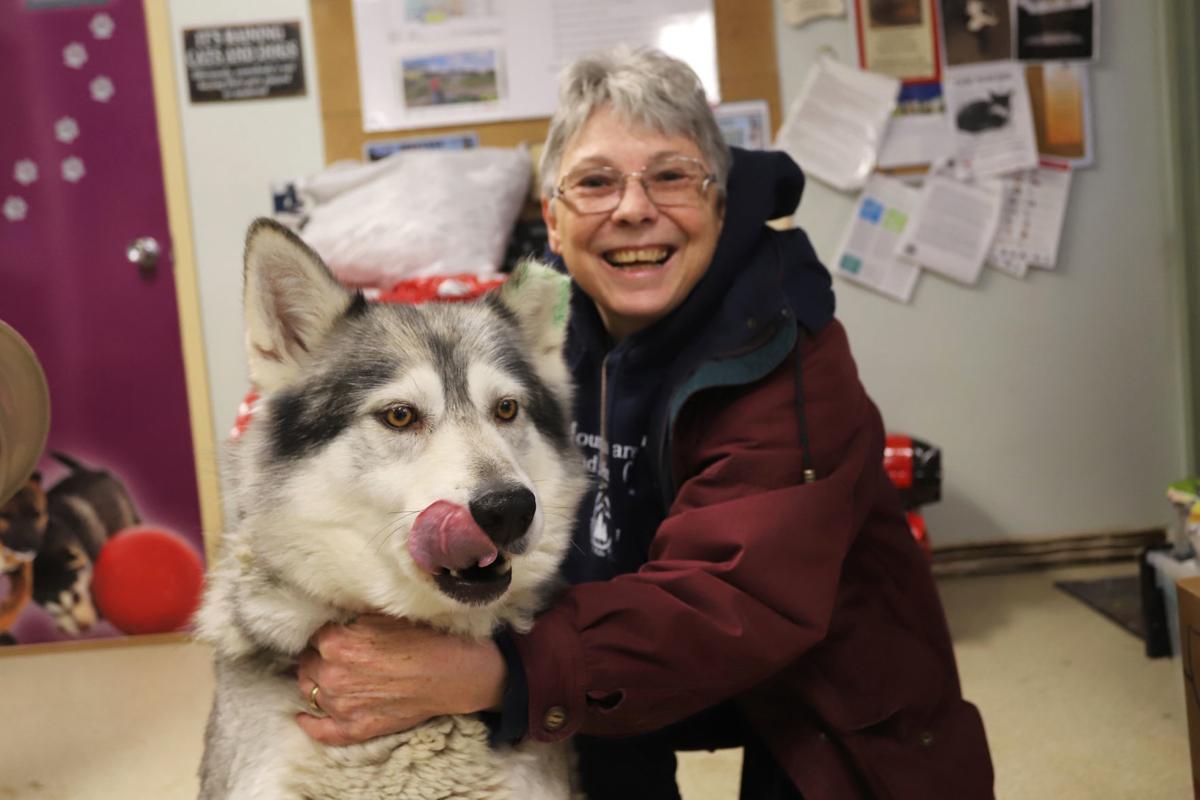 Barbara Mendenhall of Thompson Falls poses with Nevaeh at the Bitterroot Humane Association in Hamilton. Nevaeh is one of the 39 huskies rescued from a property in the Soft Rock area east of Corvallis. 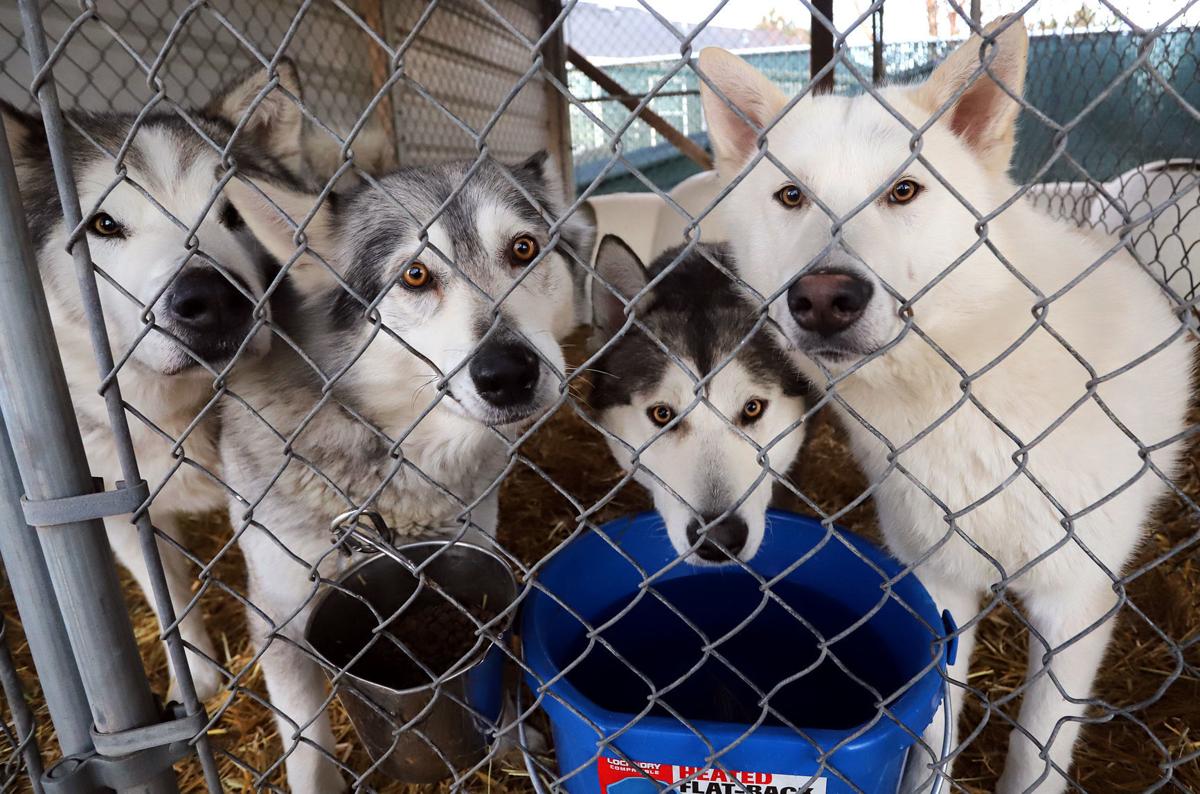 Four of the 39 huskies rescued from a property northeast of Hamilton just before of Thanksgiving are shown in this file photo,

Barbara Mendenhall of Thompson Falls was all smiles as she held tight to the end of the leash attached a large white husky named Nevaeh.

At this moment, Nevaeh’s attention isn’t on her new owner or any of the smiling faces milling around the front office of the Bitter Root Humane Association.

There’s a rabbit on the other side of the room that has captured the 8-year-old husky’s complete attention.

A former breeder of huskies with 20 years of experience with the breed, Mendenhall keeps the leash short as she stops for a moment to say just how excited she was to find Navaeh.

“We’ve been looking a long time for one,” she said. “We know this breed. We like them a lot.”

The Mendenhalls were just the kind of folks the Bitter Root Humane Association has been seeking in its quest to find new homes for some of the 39 huskies rescued from a property in the Soft Rock area east of Corvallis. Some of those dogs had been living on their own for weeks before being captured and brought to the shelter.

The rescue included 13 puppies. As of Wednesday, all but one had been adopted.

The shelter has eight adult huskies ranging in age from 1 to 8 years old that are ready for adoption. The decision on where the other 13 that remain will end up depends on the results of DNA testing that will determine if the dogs are husky/wolf hybrids.

The remaining 13 were found to be too feral for adoption. Some will likely be sent to a behavioral rehabilitation center in North Carolina. Others may end up in a sanctuary somewhere else in the country.

The shelter’s operation manager, Cyra Saltzman, said the dogs determined not to be good candidates for adoption are essentially wild and wouldn’t do well right now in a home environment. The people who work at the North Carolina center have experience working with feral dogs.

“We’re hoping that they can work with them in order to give them a good chance of being re-homed in the future,” Saltzman said. “None are aggressive, but they are very afraid. We don’t have the resources here to retrain them. They need someone who can work with them on a daily basis.”

Saltzman said the adult huskies that are available for adoption will need the right home where people have the time, energy and wherewithal to work with the dogs that haven’t had a normal upbringing. The shelter has been doing an expanded interview process to ensure the dogs find a good fit in their new homes.

“They are kind of a different breed of dogs,” said Bitter Root Humane Association board president Kathy Butts. “They really require a lot of different skill sets to ensure a quality adoption. They are big dogs with lots of energy.”

Saltzman said they need at least an hour a day of activity.

“We’re looking for families who are active and spend a lot of time outside,” Saltzman said. “They are not a couch dog.”

The expanded screening process makes it harder to finalize adoptions, but Saltzman said it ensures the huskies end up in homes of people who truly want to take on the responsibility and understand what they are getting into.

So far, the adoptions have occurred both in the Bitterroot Valley and elsewhere in the state. Saltzman said the association has worked with veterinarians throughout the state who can help them find people willing and able to step up and adopt the dogs.

“We don’t consider an adoption successful until it is,” Butts said. “It isn’t just about numbers. It’s about quality. Quality not only for the people but also for the animals.”

Of the eight that are ready for adoption, all will still need a lot of work.

“They are ones that we feel would be great in a home,” Saltzman said.

Both Butts and Saltzman said the support the shelter has received from both the community and beyond has been remarkable.

“The community has been so overwhelmingly supportive and generous,” Butts said.

“It’s been heartwarming and amazing,” Saltzman said. “I know there was some frustration at first when we were overwhelmed that people couldn’t do as much as they would have liked, but all of it has meant a lot to us. We appreciate all the kind words and letters that we’ve received.”

Without that support from all across the country, both women said it would have been difficult for the shelter to have made it to this point.

“These dogs were bred for endurance,” Butts said. “They were bred for speed. They were bred to stay warm and survive. They were bred for all the hard things that it would be to be a dog. You mix that up with something wild that you don’t know what you got. We don’t want to put them out for adoption if they would be better off in a sanctuary. We really rounded up all the cool, awesome help that there is in the United States, which says a lot for little tiny Hamilton, Montana.”

A legacy preserved: McCrossin Cabin placed on the National Register of Historic Places

A couple restores a cabin near Hamilton that now is on the National Register of Historic Places,

Meggie Morgan of Stevensville was sentenced Friday to a 20-year commitment with the Montana Department of Corrections with 15 years suspended.

The Montana Highway Patrol is asking for the public’s help in finding a driver responsible for a serious hit-and-run crash with a pedestrian Saturday night.

Barbara Mendenhall of Thompson Falls poses with Nevaeh at the Bitterroot Humane Association in Hamilton. Nevaeh is one of the 39 huskies rescued from a property in the Soft Rock area east of Corvallis.

Four of the 39 huskies rescued from a property northeast of Hamilton just before of Thanksgiving are shown in this file photo,