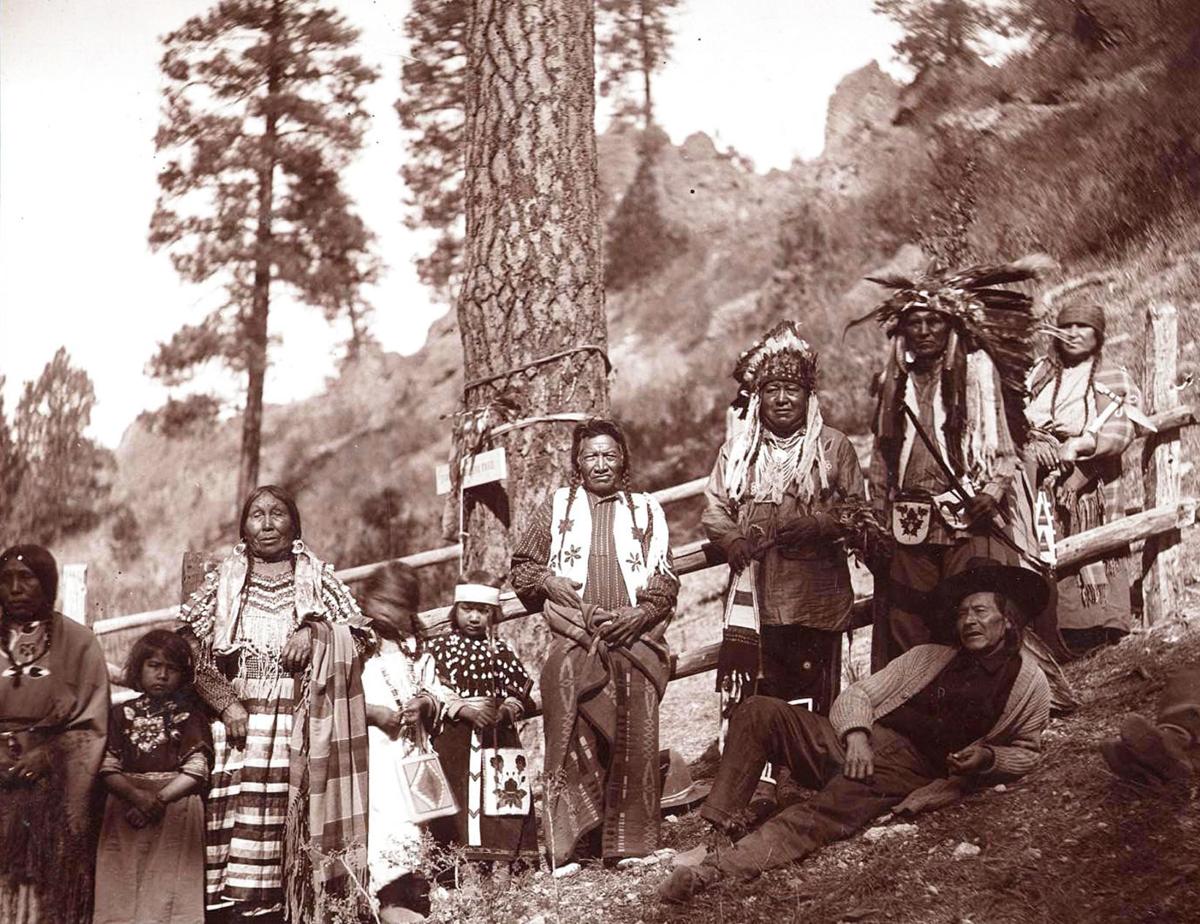 Chief Martin Charlo (center) and other members of the Salish Tribe at the Medicine Tree, circa 1923. 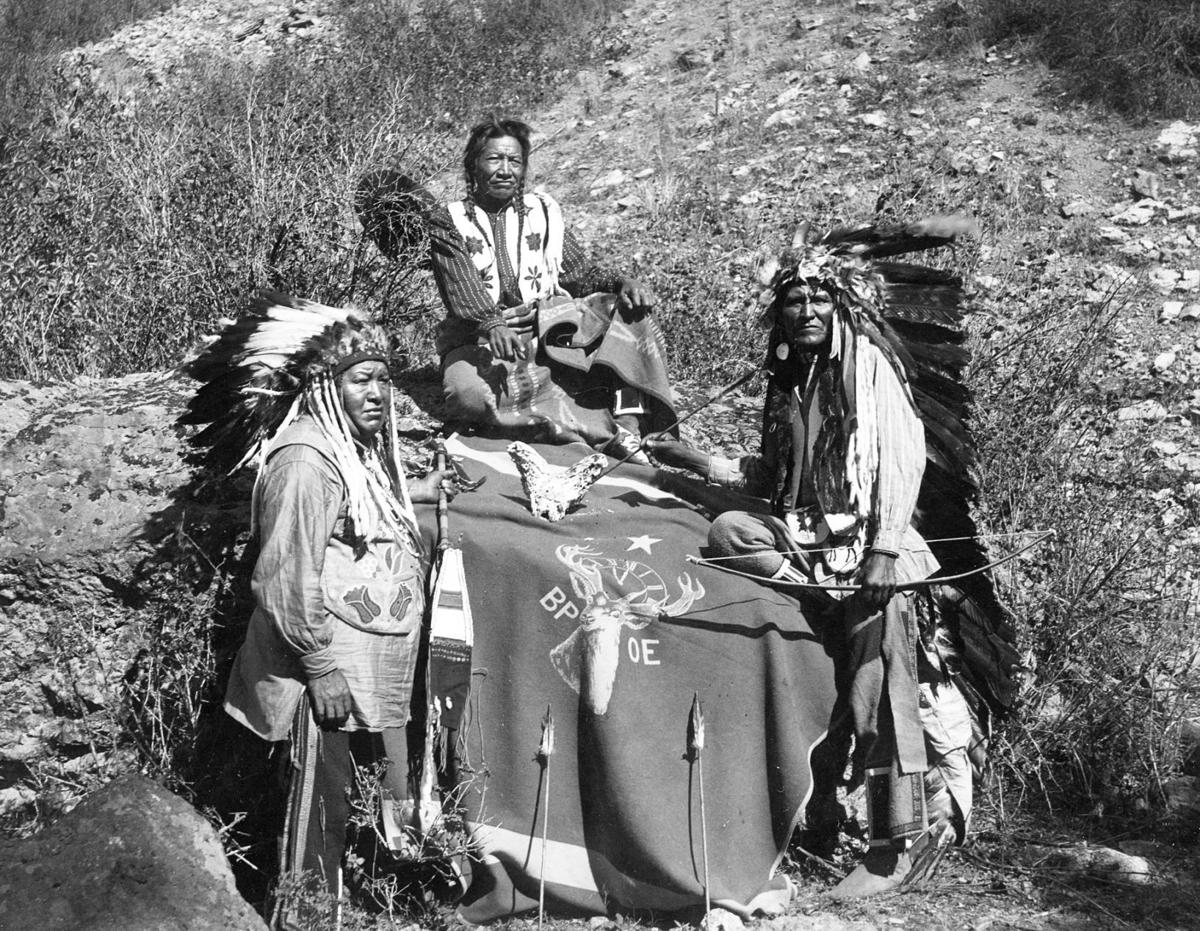 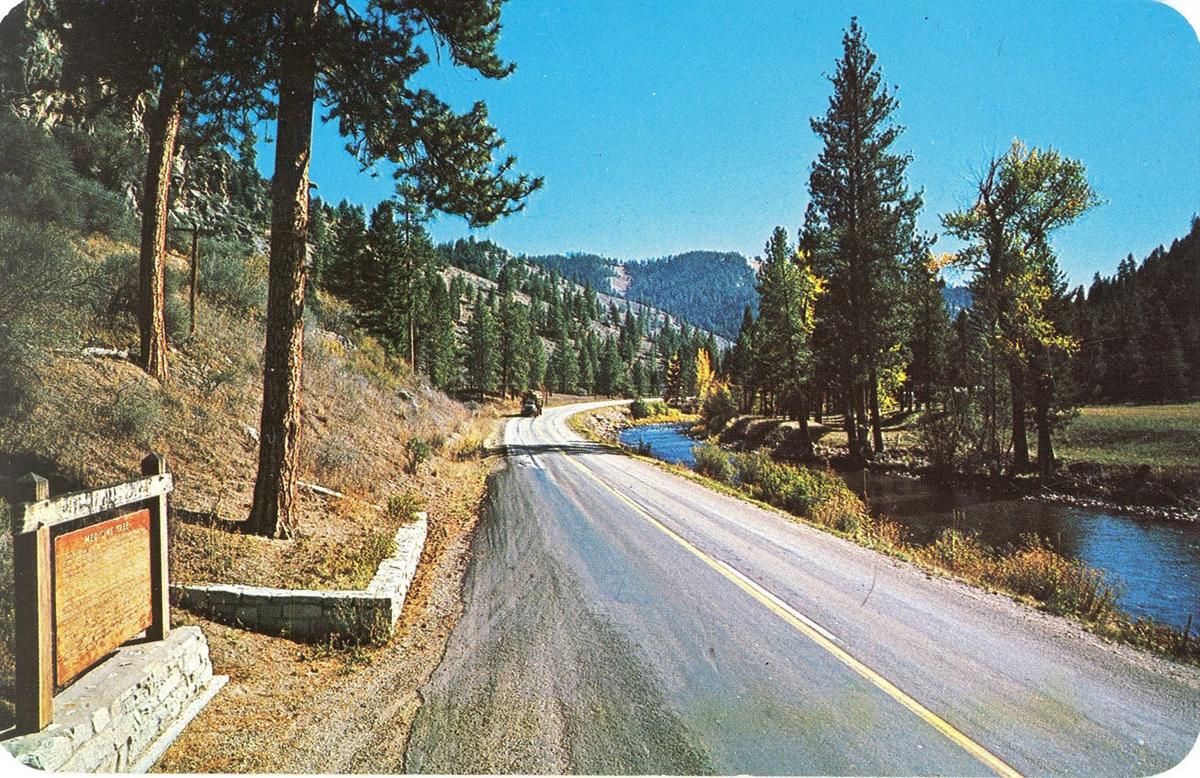 Medicine Tree with historic marker on U.S. Highway 93 on the East Fork of the Bitterroot River.

Since time immemorial the Bitterroot Valley has been the traditional homeland of the Salish people, and many tribal members still visit the valley annually to dig bitterroots and place sacred offerings at a highly revered local shrine. The Rams Horn Medicine Tree is situated on the East Fork of the Bitterroot River, and was once a popular roadside attraction, complete with a Montana State Highway interpretive sign and a commemorative plaque. The jagged 15-foot-tall stump now stands seemingly forgotten after a windstorm in 2001 took its deadly toll on the historic landmark. Local residents had noticed in the early '70s that the treetop was beginning to turn brown, and a Forest Service study in 1999 confirmed the fact that the tree was ending its natural life cycle. Today no signage remains to connect the fading icon to our fast-paced modern world, but a few old-timers still continue to use the site as their own personal global-positioner, and the Salish Indians continue to adorn it with their symbolic offerings.

Through the years there have been various stories of how the actual Medicine Tree was cut down by early loggers or has somehow been misidentified by historians. However, a close inspection of old trapper and trader era journals, combined with the oral histories of Salish Indians and early white settlers, there can be no doubt of the tree’s authenticity. In his "Early Recollections," East Fork pioneer Bertie Lord states that the actual horn was cut off of the tree in 1892 by “some vandal of a white man,” but for nine or 10 years prior to that, he had often stopped to study the horn as he made his way up and down the East Fork. The 300-year-old tree was first fully documented by Alexander Ross in 1824 as his large band of Hudson’s Bay trappers worked their way up the Bitterroot Valley on an expedition to the Snake River country.

According to Ross the party was made up of “two Americans, seventeen Canadians, five half-breeds from the east side of the mountains, twelve Iroquois, two Abanakee Indians from lower Canada, two natives from Lake Nepissing, one Saultman from Lake Huron, two Crees from Athabasca, one Chinook, two Spokanes, two Kouttanois, three Flatheads, two Callispellums, one Palooche and one Snake slave! Five of the Canadians were above sixty years of age, and two were on the wrong side of seventy.” Ross also mentions that along with his company of 55 men, there were twenty-five Indian wives with sixty-four children, and a herd of 392 horses. Alexander Ross began his career in the northwest working for the American Fur Company, and was one of the few men who opted to stay on when entrepreneur John Jacob Astor sold his trading post to the British in 1813. The men working for Astor were commonly known as Astorians, and the fort stood near the mouth of the Columbia River where Astoria, Oregon, is located today. Eleven years later, as Ross passed through the Bitterroot, he referred to the Ram’s Horn Medicine Tree in his journal and gives us a detailed first account of the tree and the significance it had with the local tribes.

“About five feet from the ground is growing up with the tree, a ram’s head with the horns still attached to it! And so fixed and imbedded is it in the tree that it must have grown up with it. One of the horns and more than half of the head is buried in the tree; but most of the other horn, and part of the head, protrudes out at least a foot. We examined both. The tree was scarcely two feet in diameter. Here we put up at an early hour and called the place Ram’s Horn in compliment. Our Flathead Indians related to us a rather strange story about the ram’s head. Indian legend relates that as the first Flathead Indians passed this way, one of them attacked a mountain ram as large and stout as a common horse. That on wounding him, the fierce animal turned round upon his pursuer, who taking shelter behind the tree, the ram came against it with all his force, so that he drove his head through it. Before he could get it extracted again, the Indian killed him and took off the body but left the head, as a momento of the adventure.”

Ross goes on to say that all Indians revered the celebrated tree, and that hunters in passing often sacrificed something as a tribute to the ram’s head. One of his Iroquois trappers, so as not to incur the displeasure of the god of hunters, hung a bit of tobacco to the horn, to insure that his hunting was even more propitious. Nine years later another trapping expedition entered the valley, led by Warren Angus Ferris. Ferris joined the American Fur Company at age 19 and kept a detailed journal from 1830-1835, later published as "Life in the Rocky Mountains." His account varies little from that of Ross, though he does give a more detailed description of the actual location of the tree itself. “On the eastside of the Bitter Root River there is a singular curiosity that I had not before observed, because it is situated under some rocky bluffs, almost impassable to horsemen; the proper road being on the westside of the river.” This is perhaps a clue as to why the famous landmark went completely unnoticed by Lewis and Clark, who passed through in 1805.

Ferris continues with his description, “The tree is unusually large and flourishing, and the horn in it some seven feet above the ground. It appears to be very ancient, and is gradually decomposing on the outside, which has assumed a reddish cast. The date of its existence has been lost in the lapse of ages, and even tradition is silent as to the origin of its remarkable situation. The oldest of Indians can give no other account of it, than that it was there precisely as at present, before their father’s great grandfathers were born. They seldom pass it without leaving some trifling offering, as beads, shells, or other ornaments.” One interesting variation in the Ferris account is that he fails to mention the entire ram’s skull, and speaks only of the horn itself. I’m not sure exactly how to explain the discrepancies in the two differing reports, though some investigators believe they are speaking of two separate locations entirely.

Apparently medicine trees were fairly common in western Montana, and several other sites have been documented in Flathead County and Deer Lodge County, as well. However, not all medicine trees display a ram’s horn buried in the trunk, and many were merely adorned with painted figures and an assortment of offerings. On Sept. 11,1805, Sgt. John Ordway of the Lewis and Clark Expedition mentioned a medicine tree that would seem to fall into this category. As the Corps began their trek up Lolo Creek, Ordway noted that the Corps “passed a large tree on which the natives had a number of images drawn on it with paint. A part of a white bear skin hung on said tree. We suppose this to be a place of worship among them.” A similar report of this sacred medicine tree was recorded by Corps member Joseph Whitehouse, proving that both men were astute observers, who managed to leave us a unique perspective of early Native customs in western Montana.

In his book "Pioneering in Montana," Granville Stuart gives another account of a large pine tree that was located on top of a hill near the Clark Fork River, east of Missoula. Stuart mentions that the Indigenous people “hung small articles of beadwork, bear claws, strips of red cloth, queer-shaped stones, bunches of white sage, pieces of buffalo scalp, small pieces of bone, etc.” on the tree. He adds that the offerings were made “as the Indians passed on their way out to the hunting grounds, and were placed there to invoke the Great Spirit to make game plentiful and to make them successful in their enterprises.”

Here in the Bitterroot Valley the Ram’s Horn Medicine Tree plays an important role in the Salish creation story. In this story Coyote, who possesses great medicine, travels the land slaying monsters in preparation for the coming of man. Coyote learns of a giant wicked sheep in the Bitterroot Valley who kills all who try to pass through his domain. Coyote goes to the place by the river and asks the ram to demonstrate his power. Pointing to a small tree he asks the sheep to knock it over, and of course the horrible, boastful creature could not resist the chance to demonstrate his awesome strength. He lowered his head and charged the tree, smashing it with his huge horns. The ram struck the tree with such force that one of his horns went all the way through the tree, making it impossible for him to escape. With three swift strokes of his flint knife, Coyote cut off the body from the head and threw it against the rocks, saying, “In the generations of human beings to come, there will be no such wicked creatures. This tree will be a place for human beings to leave offerings of their prized possessions, and to give thanks, and to pray for their well-being, for good fortune and good health.”

Traditionally the Ram’s Horn Medicine Tree has served just that purpose. It has been said that the tree offered a neutral zone, where sworn enemies could come together peacefully and openly discuss their grievances. Men would congregate at this solemn site and work through their differences and perhaps they might even come away with a better understanding of cultures different from their own. Their mutual well-being, good fortune and good health depended on it. In this respect, it seems Coyote was true to his word.

Of all the stories to come out of the lawless days of the Montana Gold Rush, perhaps none are equal to the one told by Wilber F. Sanders about an eventful night he spent among the road agents at one of their more infamous lairs.

It is generally accepted by historians that Francois ‘Benetsee’ Finlay, an employee of the Hudson’s Bay Company, first discovered gold in Montana on an upper tributary of the Clark Fork sometime around 1850.

A journal of life in the Bitterroot

Chief Martin Charlo (center) and other members of the Salish Tribe at the Medicine Tree, circa 1923.

Medicine Tree with historic marker on U.S. Highway 93 on the East Fork of the Bitterroot River.