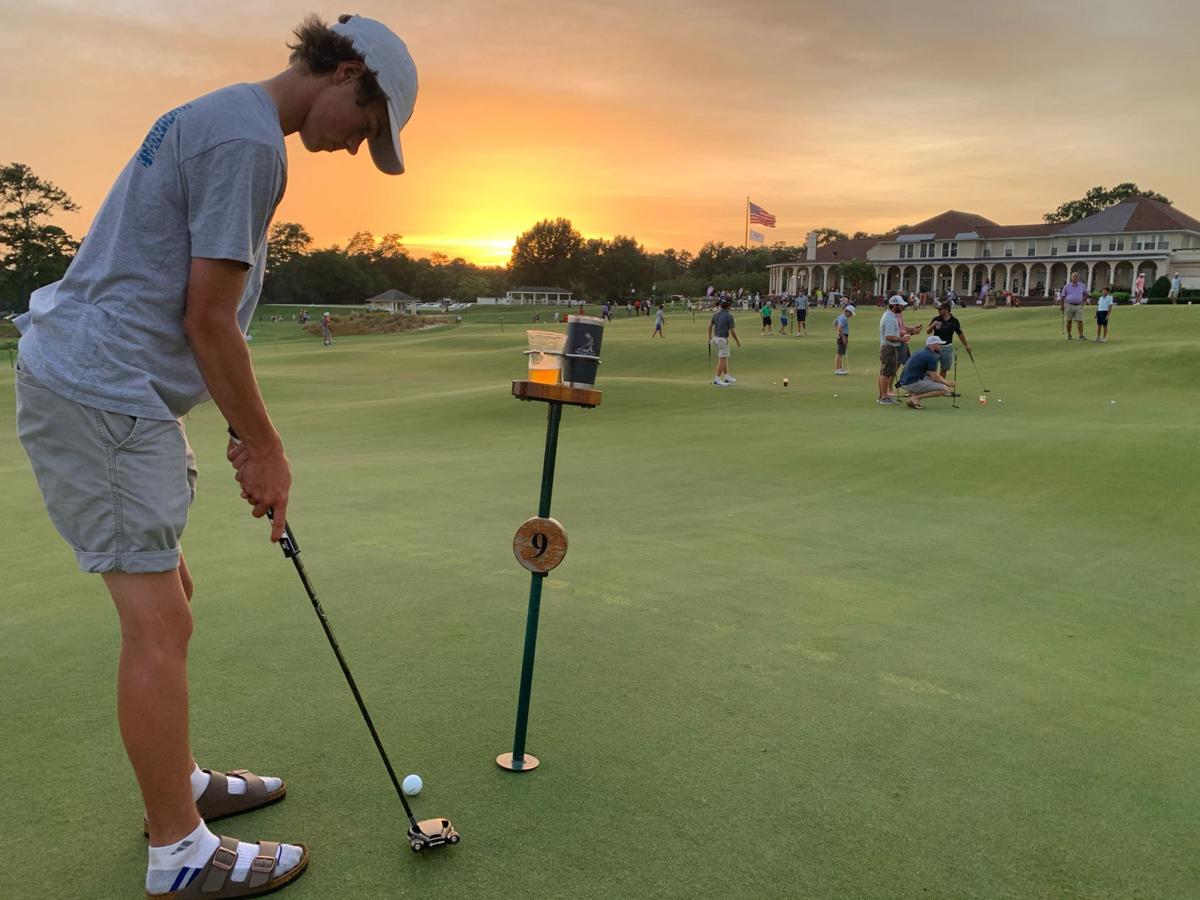 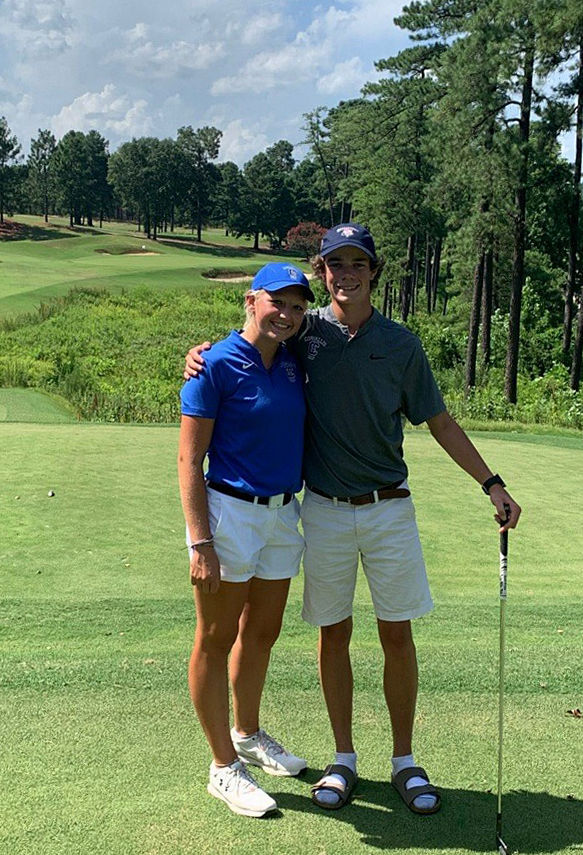 CHS junior Luke Schlimgen and sophomore Macee Greenwood, and six other high school golfers from around Montana, competed on their dream greens in the midst of hurricane Isaias. They experienced torrential rains, greens that looked like rivers, massive wind and nearby tornadoes.

Pinehurst has nine golf courses around the “village” and has hosted US Opens, the US Amateur Championship and is ranked up there with Andrews Golf Course in Scotland.

At the National High School Golf Invitational Schlimgen played 54 holes for the tournament on Monday, Tuesday and Wednesday on courses numbers six, eight and nine. The first day he got through seven and a half holes when the tournament suspended play on account of rain.

“It was a torrential downpour,” Schlimgen said. “It was almost like the Amazon Rain forest, hot, humid and pure. It was a pure course, just awesome.”

The second day he played 11 holes, for a total score of 79, to make up the ones he didn’t get to play due to rain on Monday. He then went to a second course to play for another 18 holes in 90 degree heat with 80% humidity. His score on the front nine was 34 but he struggled on the back nine for an 84 score, total.

Schlimgen said the event was an amazing experience.

“I learned a lot, played okay,” he said. “Shooting 34 was probably the highlight on the second day. The back nine was not very good at all.”

He played against 240 male high school golfers from around the United States and Guam.

“I could have played better, but it happens,” Schlimgen said. “It is a great place to go if you want a vacation.”

His total for the National High School Golf Invitational was 138, the winner, a sophomore, shot 10 under for three days of play.

Greenwood described the invitational as “an amazing trip.”

“Just being able to do it was incredible,” she said. “I had decided not to do it and then had so many tournaments get canceled due to COVID, so we decided last minute to do it.”

“Being able to play one of the most known courses in the golf world was a big deal,” she said. “It was awesome. I’d seen it on TV before they hold Majors there on Pinehurst number two which is the most famous one.”

She said a practice run on Pinehurst courses numbers six, eight and nine, then played on those courses.

“We did get to go to number two. It was so cool, I’ve never seen a putting green like that one,” Greenwood said.

Her scores were 78 for the first day, 75 for the second day, 77 for the final day and ended up placing 18th out of 105 female high school golfers.

“My goal is to break 80 and I did every day,” she said. “I was happy with that on extremely difficult golf courses. The walks were so hard and that was difficult. I putted good and played with extremely good golfers. That helped me to stay focused and keep pushing.”

She said a stand-out moment happened on the back nine of the last day.

“I shot 40 on the front and knew I had to turn it around on the back,” Greenwood recalled. “I birdied number 10. On 11, I hit my shot and went into the bunkers – those are so high you can’t see them. I hit my ball, flopped it up on the green and it stopped right on the lip. I went two under that was one of my best shots of the round.”

Her goal for next year is for her Corvallis team to win at state and receive a team invitation.

“To go an experience that with a team would be incredible,” Greenwood said. “It would be so cool.”

She is going into her junior year and said COVID has taught her to “treasure what you have.”

“When our softball season was canceled we were brokenhearted because this is the year we’d been building up for it, but someone said, ‘don’t take things for granted you never know when it will be your last time on the field or competing,’” Greenwood said. “With COVID I don’t know if we’ll have a golf season this year, so I tried to take this tournament in and enjoy every moment of it.”

“Those kids are high level in golf,” Schlimgen said. “Luke scored 138, it was a great experience and he had extreme highs and pretty low lows but agreed that it was an amazing event that you wouldn’t want to miss. Greenwood had three great rounds and is playing really good golf right now.”

“We had a tournament schedule set back in May or June and now with all the rules and COVID policies, most of the golf courses aren’t allowed to have that many kids at one time on the courses,” She said.

Usually tournaments “shotgun start” with 80-100 kids in groups of four. Montana High School Associations has limited “shotgun starts” to about half that number.

“That’s a problem,” Kristi Schlimgen said. “Some courses aren’t even allowing shotgun starts at all. So all of those tournaments, about half our schedule, are automatically canceled. We’re scrambling right now to come up with a schedule for duals or triangulars, instead of having 12 schools at one golf course on one day. We won’t be having those at all this year.”

She said golf is played outside.

“You don’t chest bump, you don’t come in contact in anyway with another golfer,” Schlimgen said. “You’re not touching any equipment, now no one is allowed to pull a flag out of the cup anymore. Golf is one of the few sports that have been allowed to continue because there is already social distancing, naturally.”

In Montana, high school golf practices began Thursday, with many changes to reduce the spread of the coronavirus.

“I know it will be different from what we’ve had in the past,” Luke Schlimgen said.

Even back-to-school shopping is different this year and the generous in heart are focusing on providing shoes and backpacks. The Salvation Army Ravalli County is providing school shoes now through Sept. 8 and Maria’s Restaurant is giving away backpacks on August 19.

Western Mental Health Center in Ravalli County is hosting a back to school event for students to pick up a free backpack with supplies, from noon to 2 p.m., August 24 – 28, at the red building, 209 N 10th St., in Hamilton.

Volunteers from the local non-profit Bike Walk Bitterroot painted a high-visibility mural on the crosswalks atthe intersection of State and Fourth Streets this weekend as a community pop-up project.

Masks are mandatory for Darby and Stevensville schools

Darby and Stevensville Schools are following the Governor’s mandate for masks to prevent the spread of the coronavirus.