A judge denied Friends of the Bitterroot’s request for a preliminary injunction on the Bitterroot National Forest’s Darby Lumber Lands II Project Wednesday.

U.S. District Court Judge Dana Christensen said the group failed to show that it would be harmed by allowing the project to move forward since logging wasn’t expected to start before this fall.

By that time, Christensen said the court will likely have ruled on the merits of the Friends of the Bitterroot lawsuit.

The Friends of the Bitterroot requested a preliminary injunction and temporary restraining order in April.

The project proposes to harvest timber from 959 acres, build 4.3 miles of new permanent road and another 8 miles of temporary road.

Friends of the Bitterroot said the agency’s decision to include logging in the second phase of work on the already heavily logged area that was once owned by Burlington Northern Railroad and then Darby Lumber was contrary to the agency’s initial focus on restoration of the area.

In his April 29 ruling, Christensen agreed with the Forest Service’s assertion that the Friends of the Bitterroot alleged “a generic allegation of harm” and its delay in filing the lawsuit and seeking an injunction undermined its concern that harm was imminent.

Crews with Pyramid Mountain Lumber have been working to upgrade the roads on private land, but have yet to move onto the national forest. Timber harvest is expected to begin in October once the road work is complete.

The federal government acquired the former privately owned lands in 2005 and 2013. Before the acquisition, the lands were managed for timber production, which included an extensive road network. 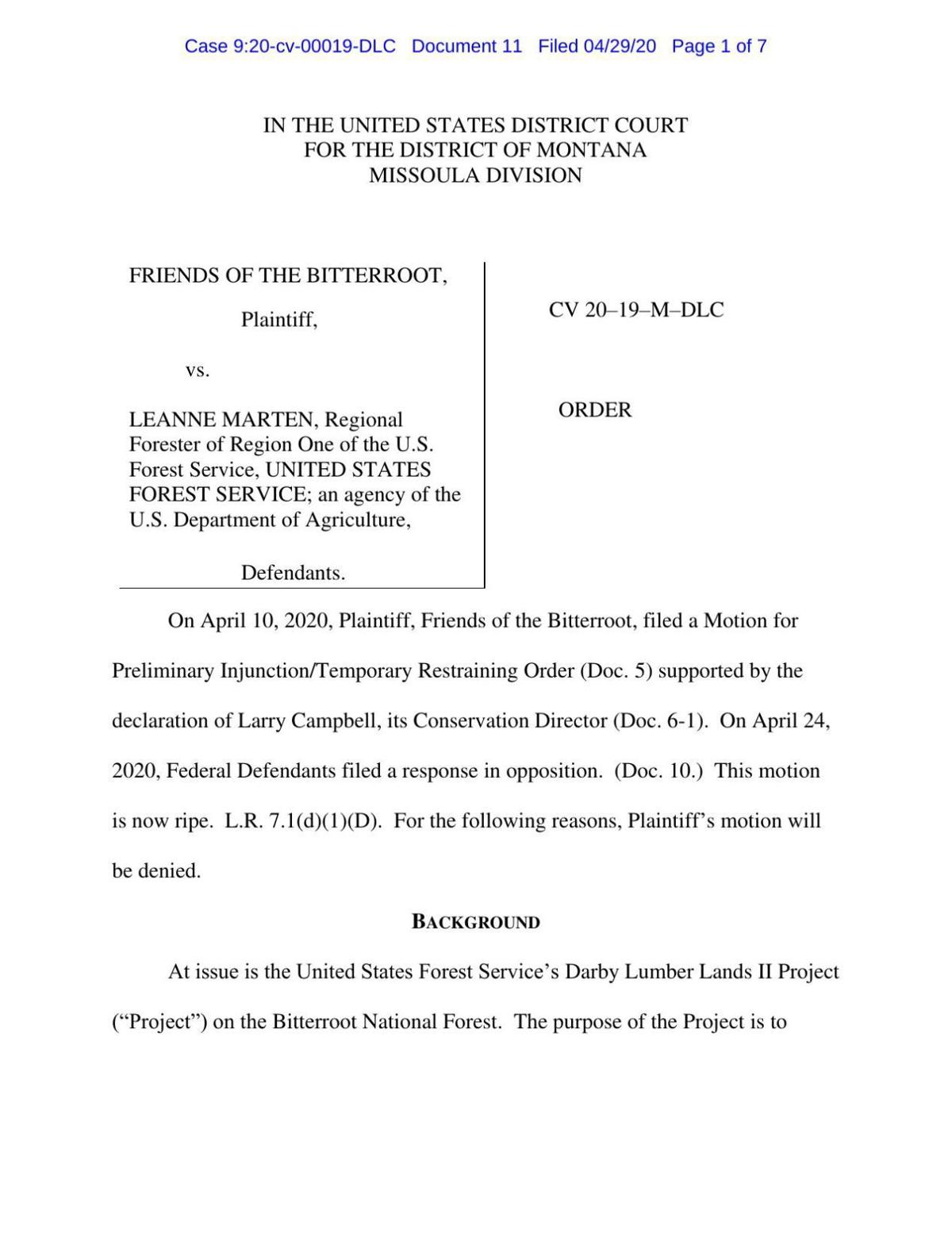 The project proposes to decommission 39 miles of road and place another 16 miles into long-term storage.

In his decision, Christensen said that Friends of Bitterroot’s request for a preliminary injunction because logging and road work pose a threat to the quiet seclusion of the forest failed to acknowledge that logging activities would not start until October.

By that time, Christensen wrote the court can decide the case on the merits.

Christensen said the majority of the road work proposed as part of the project advances the interests of Friends of the Bitteroot because it will result will be net decrease in about 38 miles of road.

Beyond that, Christensen said the Friends of the Bitterroot’s four-month delay in filing the lawsuit and its additional seven-week delay in seeking an injunction “calls the imminence of the alleged harm into doubt.”

Christensen ordered both parties to have their respective motions for summary judgment fully briefed no later than August 14.

The COVID-19 pandemic is creating uncertainty the Hamilton's Daly Mansion and Stevensville's Historic St. Mary's Mission. Both depend on tourism and special events to raise the revenues needed to remain financially solvent. Neither receives any operating funds from the state or federal government.

As Ravalli County prepares to scale down its public outreach efforts on the COVID-19 pandemic, most Bitterroot Valley schools have decided to keep their campuses closed through the rest of school year.

Ravalli County Elections Administrator Regina Plettenberg said Friday, May 1, would be the last day voters should mail their ballots.

Sometime between the evening of April 28 and the early morning hours of April 29 someone painted graffiti on the skatepark.

The Lewis woodpeckers are back in the Bitterroot. And a pair of citizen scientists who live just south of Hamilton couldn’t be happier.