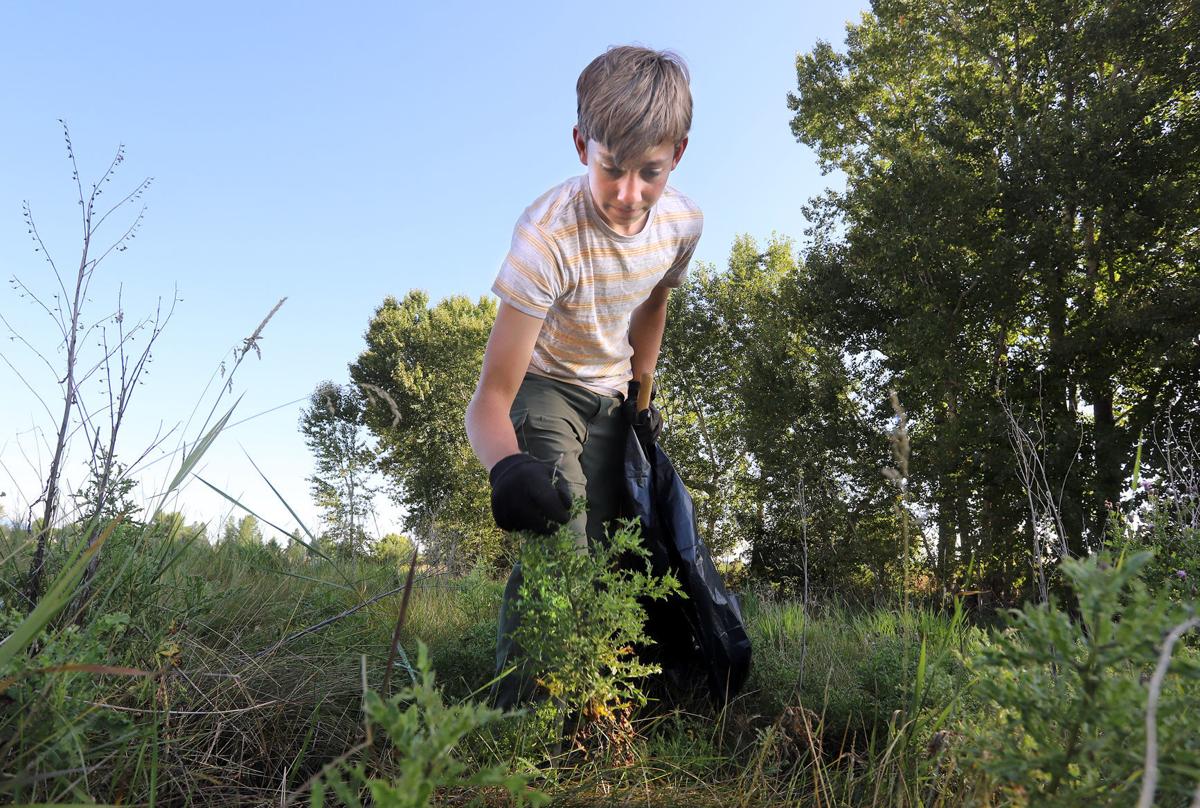 Hamilton High School freshman Gavin Turner carefully pulls off the seed heads from a thistle plant Friday morning at the future Skalkaho Bend Park. Turner was one of about 20 high school cross-country members who volunteered to help with weed control on the land currently owned by the Bitter Root Land Trust. 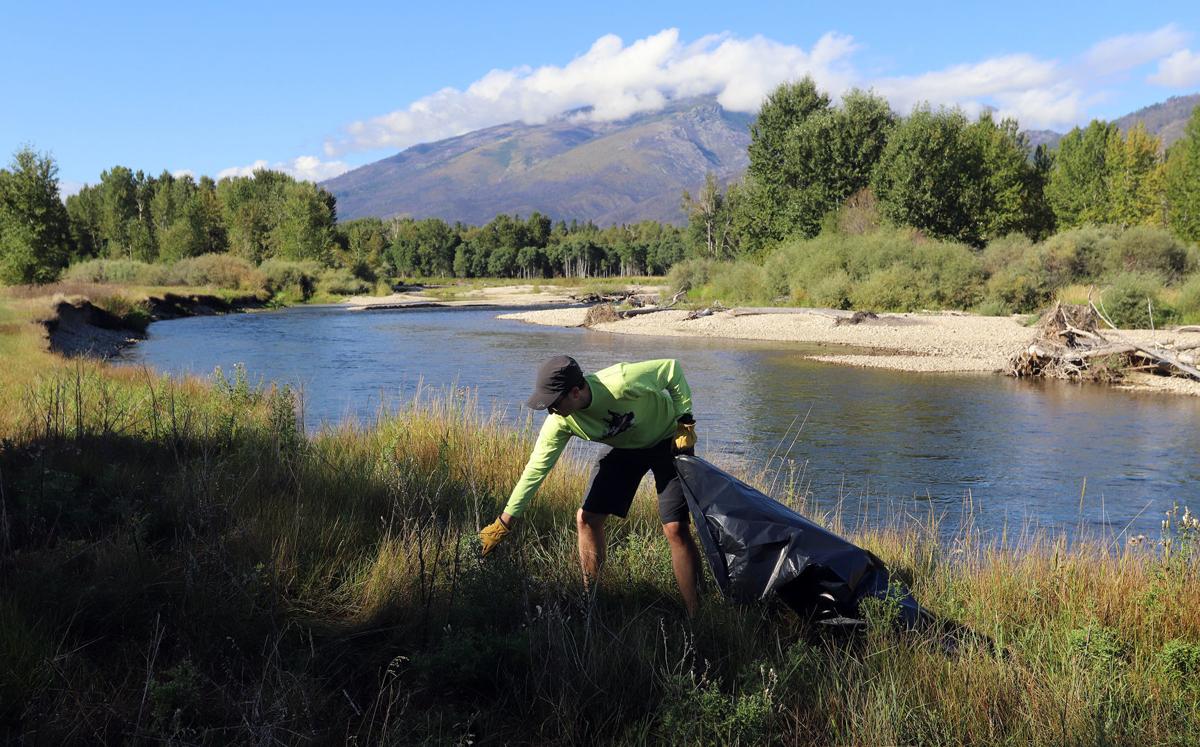 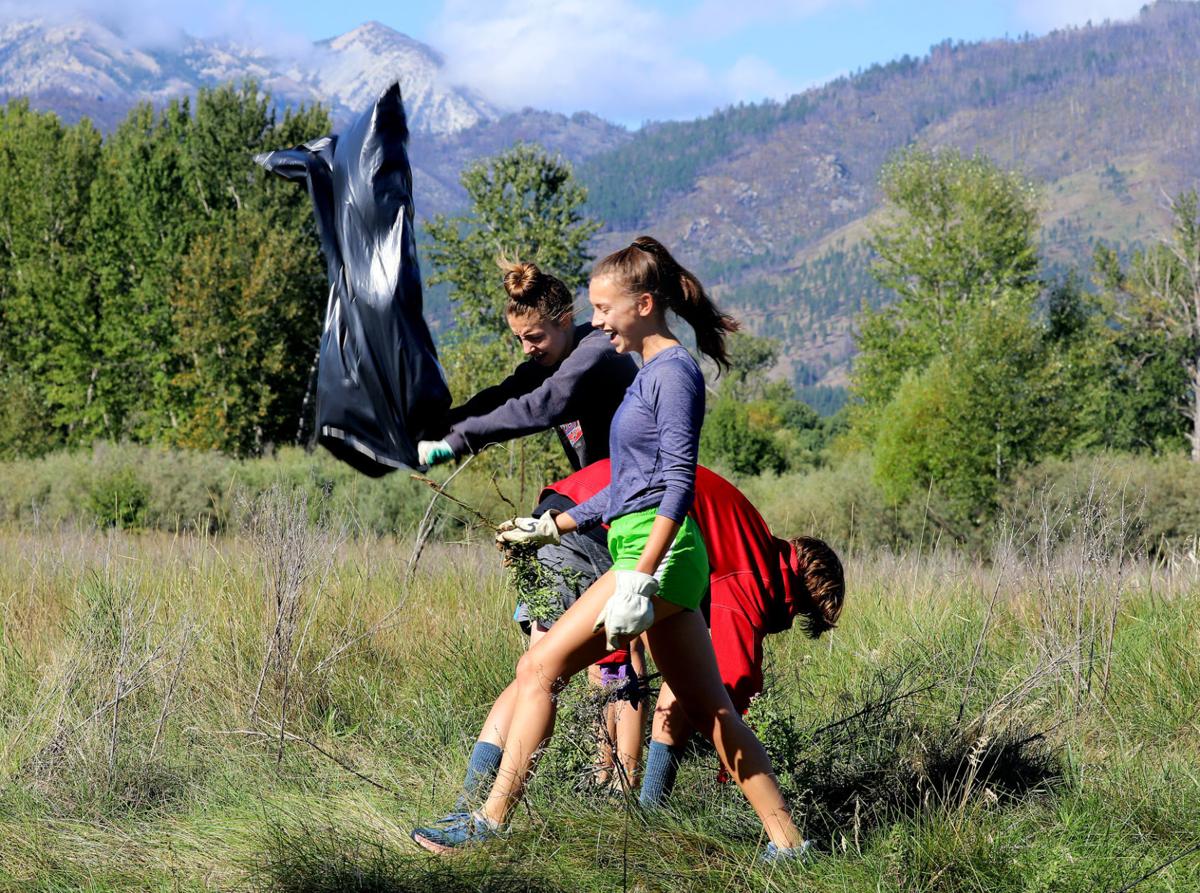 Sarah Passey, Andrew Searle and Brynnli Poulsen enjoyed each other's company as they spent Friday morning pulling weeds at the future Skalkaho Bend Park during a school-wide volunteer effort that put about 200 Hamilton High School athletes out into the community doing a variety of volunteer work for local nonprofits.

When the Bitter Root Land Trust first purchased the 70 acres along the Bitterroot River that people have come to know as the future Skalkaho Bend Park, the hope was that it would be open to the public by the end of 2020 if everything came together as planned.

That was before an outpouring of support from the community that pushed that timetable up at least a year.

“Overall, we’re ahead of schedule,” said the trust’s executive director, Gavin Ricklefs, Friday morning as he watched members of the Hamilton High School cross-country team gather on the property just south of River Park. “Given the amount of fundraising that was going to be required and all the infrastructure that needed to be built, the thought was the transfer of this land would likely happen at the end of 2020.”

Now, if nothing unexpected happens, the land trust could officially transfer the land over the City of Hamilton sometime before the end of this year.

“That’s an indication of this community wanting to see this happen,” Ricklefs said. “They have behind this project right from the beginning. Whether that came in the form of a donation or today’s group of kids coming out to pull weeds, it’s been clear that this community sees the value in preserving open space and riparian habitat.”

On Friday, a group of about 20 members of the cross-country team put on their work gloves and gathered up their shovels as part of an effort by more 200 student athletes to show their support for the community that supports them.

Hamilton Athletic Director Travis Blome said the school hopes the community-service volunteer blitz that sent student athletes all across Hamilton will become an annual event to kick off the school’s fall sport season.

Volunteer efforts that have already been undertaken at the new Skalkaho Bend Park are making a difference.

This spring, the Hamilton Volunteer Fire Department offered its help to do a controlled burn that completely changed the appearance of the park’s uplands.

Kyle Anderson, the trust’s stewardship coordinator, said the volunteers with the fire department carefully burned a large build-up of weeds in an effort  that enhanced the views and eliminated a source of noxious weed seeds. An application of herbicide afterward has helped grass get the upper hand on the meadow lands.

“And now I’m excited now to see what 20 cross-country kids can get accomplished in two hours,” Anderson said.

Before sending them off with large commercial black bags in tow, Anderson gave a brief lesson on the weeds he wanted removed and the best way to accomplish that task

Knapweed needed to come out by the root, but Anderson urged the runners to be more gentle when it came to the thistles. Pulling them up would just cause their complicated root system to sprout more plants. The best course of action was just to remove their seeds.

“They are horrible plants once they get going,” he said. “They can take over a site if you allow them to.”

And when it came to deal with all that yellow-flowered tansy growing alongside the ditch bank?

Anderson urged the young weed fighters to leave the mature plants be since its sap was toxic to human skin. If they saw any immature plants growing while on their weed hunting adventure, he said to reach down, pull them out and leave the plant on the ground.

“My plan is to turn you loose and let you go nuts pulling weeds,” Anderson said. “Scatter to your heart’s content. … The work you accomplish today will mean a lot less herbicide will be needed here in the future.”

When the park finally opens the public, it may become part of the running route for members of this team and those to come. Community members will enjoy 3 miles of contiguous trail along the Bitterroot River running through Skalkaho Bend, River and Steve Powell parks when the project is finished.

Bitter Root Land Trust Conservation Project Manager Grant Carlson said there are two prongs to the project that need to be completed before the land can be turned over the City of Hamilton.

A good deal of infrastructure work needs to be constructed, including building a parking area and a bridge across the ditch that’s stout enough to be used by emergency vehicles. The trust is in the middle of the planning and design work for those projects, with the hope of breaking ground in early fall.

The other prong includes the completion of the necessary documents that will convey the land from the trust to the city with the purpose of protecting both the trust’s and funder’s vision for the property.

“Our goal is to have both of those prongs completed by late fall or early winter,” Carlson said. “I think that’s realistic.”

Quick action from three volunteer fire departments kept a Hidden Valley home from burning completely to the ground Sunday, but the homeowner s…

The Ravalli County Commission will ask the Montana Department of Transportation to place a traffic light at Bell Crossing on U.S. Highway 93.

'An enticing place': Homebuilders staying busy in the Bitterroot Valley

Anyone who travels much in the Bitterroot Valley knows that homebuilders have been busy for the last couple of years.

Hamilton High School freshman Gavin Turner carefully pulls off the seed heads from a thistle plant Friday morning at the future Skalkaho Bend Park. Turner was one of about 20 high school cross-country members who volunteered to help with weed control on the land currently owned by the Bitter Root Land Trust.

Sarah Passey, Andrew Searle and Brynnli Poulsen enjoyed each other's company as they spent Friday morning pulling weeds at the future Skalkaho Bend Park during a school-wide volunteer effort that put about 200 Hamilton High School athletes out into the community doing a variety of volunteer work for local nonprofits.