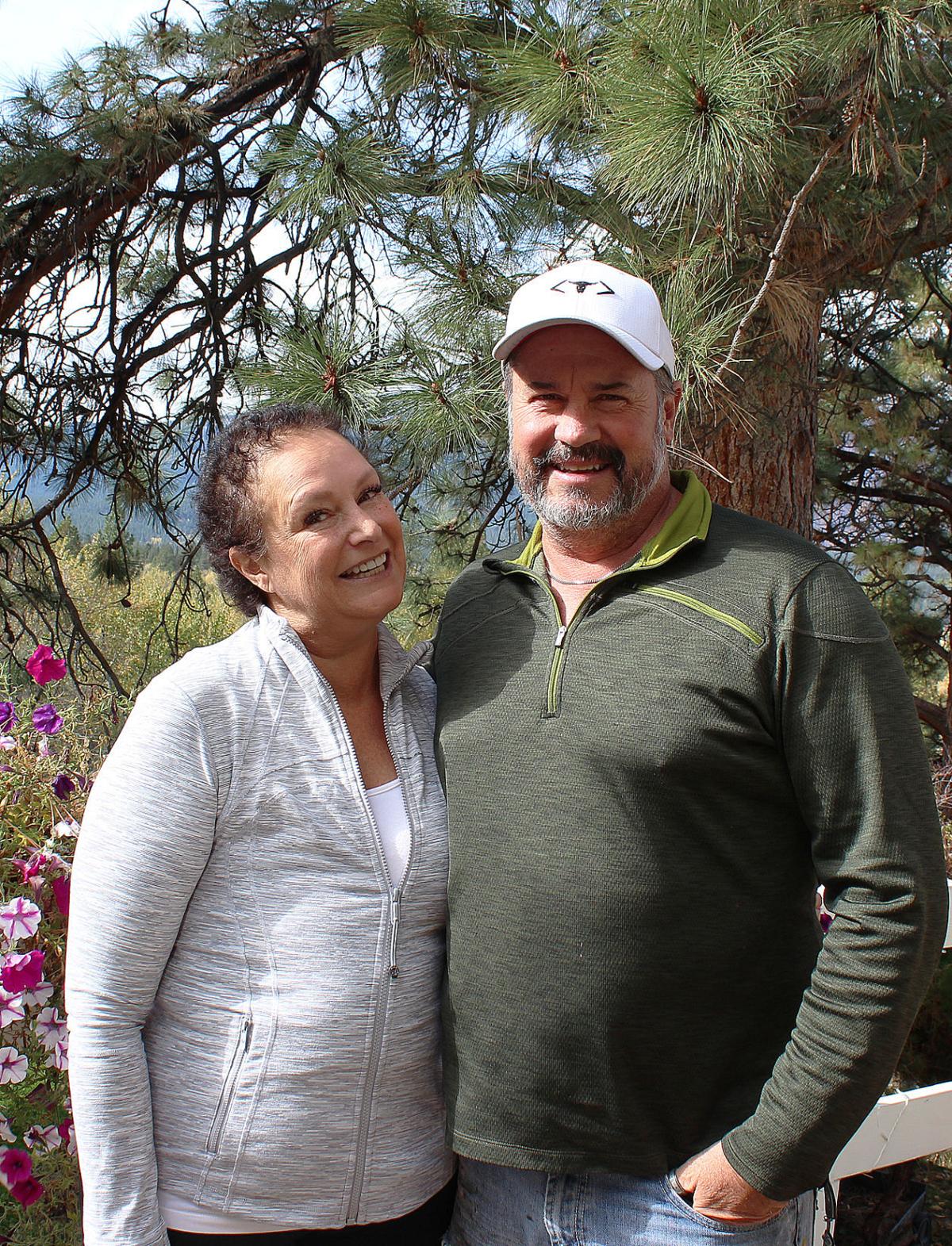 Gina and Troy Collins stand on their back porch that faces the Bitterroot Mountains. “I am so blessed by this community,” Gina Collins said. “I don’t think people understand how giving and supportive and amazing the people are who live here.” 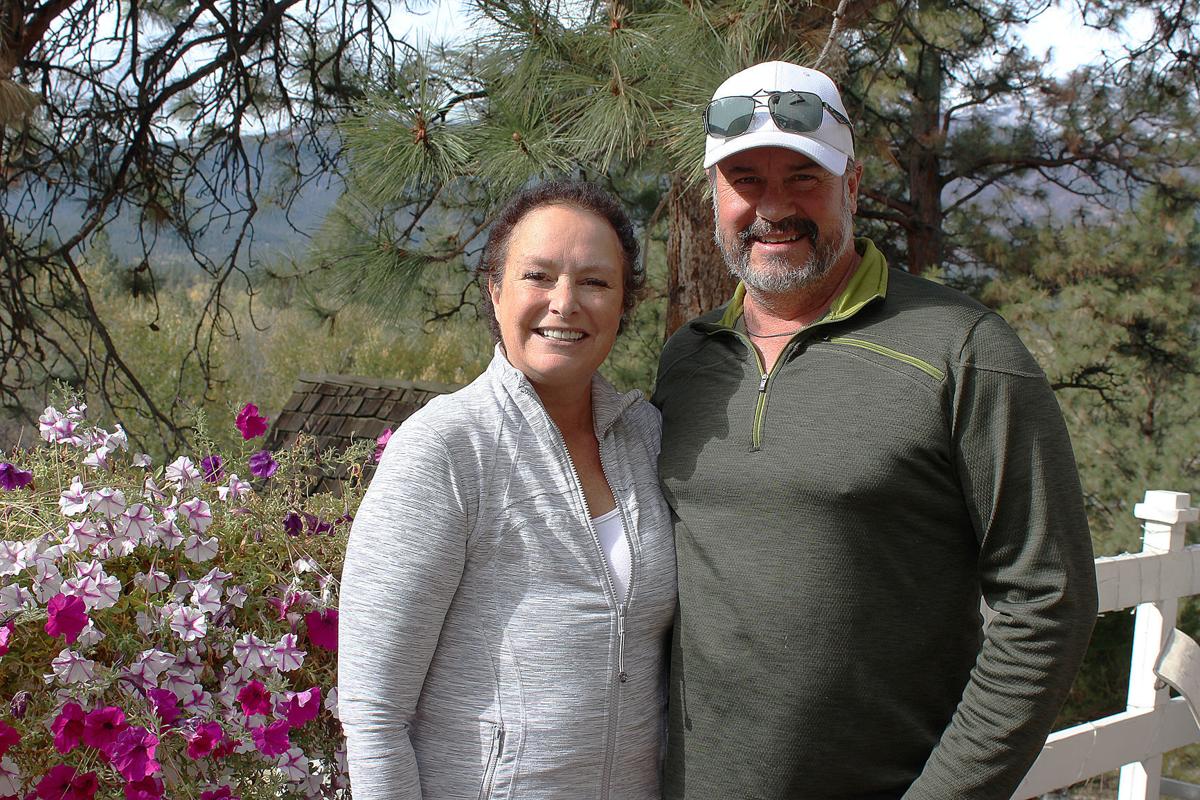 Gina and Troy Collins thank the supportive community. Troy Collins has painted an original piece of art that will be available for silent bids at the Colors of Cancer Art Show in Marcus Daly Memorial Hospital this Friday afternoon, Oct. 16. Potential buyers can stop by to see his piece and bid or choose a “buy-it now” option on the Colors of Cancer Facebook page from noon to 5:30 p.m.

Gina Collins thrives in the spotlight and is well known in the Bitterroot Valley for performing and directing roles in community theater as well as leadership in philanthropy and fundraising.

However, this last year proved more dramatic than she would’ve ever anticipated or wanted. It’s been 12 months since her breast cancer diagnosis and she recently shared the hope derived from her difficult journey.

“My entire family has passed away with some kind of cancer,” Collins said Monday.

Her dad had a brain tumor, her stepmother died from lung cancer, her grandma from liver cancer, her aunt from pancreatic cancer and she lost her mom to breast cancer seven years ago at the age of 66.

“In my family, when you’re diagnosed with cancer, it is a death sentence and everybody says, ‘well, okay, let’s get to work,’” she said. “We all sit through the treatments and know the process like the back of our hand. We are good at care giving and know about the benefits of hospice.”

Her experiences led to passionate involvement in Relay for Life, a community-based fundraising event for the American Cancer Society. She chaired the Ravalli County event for six years and raised more than $500,000 from local supporters.

“I got involved because I knew they were never going to let me into a lab to do research,” Collins said. “I’m a high school English teacher. No one is going to let me touch a beaker, but I was super-good at raising money.”

What she treasures from the experience was learning about cancer prevention, cancer treatment and meeting so many survivors.

“Celebrating a survivor was so important to me,” Collins said. “They inspired me to do good things for myself, like doing breast exams, trying to live healthier and knowing a cancer diagnosis is not the end of the world. These days there’s a strong possibility that you’re going to live and you’re going to live well. It was a huge change for me.”

Collins said her regular self checks and body awareness led to proactive efforts with her breast health.

“Twenty-three years ago I had my first lumpectomy on my right breast,” she said. “Every six months I have been going in because I check myself, find lumps and take action.”

However, two years ago she didn’t feel right and was more lethargic. After a mammogram, the radiologist noticed her right nipple was starting to invert. When nothing showed up on the ultrasound, changes were chalked up to dense breast tissue and perhaps scar tissue from her first lumpectomy.

A year ago, she noted more changes. The ultrasound again didn’t show anything of concern but after a biopsy, she was introduced to a nurse navigator to plan future appointments.

“The test came back positive and I thought, ‘It’s time to go to battle, here we go,’” Collins said. “My type of cancer is really hard to detect in dense breast tissue.”

“From that experience, I learned that if you feel anything, take action,” Collins said. “Do breast self-checks, but if you’re not comfortable then just pay the cost and go to the doctor. Patients must be aggressive advocates for themselves, but if you don’t think you can do it and ask the right questions, then find someone to advocate for you.”

She said it’s important to be insistent because she believes if she had waited two more weeks, her diagnosis would have been stage four.

“It was a blessing that I went in when I did,” Collins said. “We must stay on top of our health with diet and exercise, but also understand that we could be genetically predisposed, no matter what we do.”

Collins said she innately knew she had cancer, even before the doctor called because scar tissue doesn’t grow and her lump was growing fast.

“From the beginning, I don’t remember crying,” she said. “I just triggered an ‘I can do this’ attitude. Because of my Relay for Life and American Cancer Society experiences, I knew it was beatable and that a positive attitude was the most important medicine.”

Within weeks of her diagnosis, she underwent a mastectomy on her right side and had five lymph nodes removed.

“My children were my biggest inspiration because I wanted to prove that having a cancer diagnosis does not mean you’re going to die,” Collins said. “I wanted them to watch how I did it. I stayed super-positive and resolute, even at my sickest.”

Collins said the chemotherapy treatments were the hardest and losing her hair was emotionally difficult.

“I wiped my hand across my forehead to move my bangs and they came out in my hand, that was super-hard,” she said. “I cried that day, but decided to shave my own head that very day because I didn’t want my husband to have that horrible experience. And I wasn’t going to let cancer take [my hair] from me, I did it on my own terms.”

Collins endured 20 weeks of chemotherapy and drove to Missoula each week all winter. She said the experience was positive because of the friends and family who sat with her during treatments, but it would have been even better if a cancer center with more oncologists was located in Hamilton.

“We had friends come to every infusion,” she said. “I literally had a tribe of people show up to each chemo session and we just laughed. I told Troy that I might be the only person who looked forward to chemo, because it was going to be a party.”

The COVID-19 pandemic hit during her second-to-last treatment, which meant isolation was essential and she had to drive to Missoula by herself every day for eight weeks for radiation.

“No one could come with me,” Collins said. “I didn’t really have a choice because I couldn’t be around anyone. An infusion center would be a really great addition to our community and would benefit patients so much.”

She deeply values the compassionate support of her husband, Troy, during the last year.

“He’s been the most amazing husband, amazing,” Collins said. “He’s been inspiring and a great caretaker and still painting and doing the things he has to do to provide. I will never be able to thank him enough.”

Collins said a solid group of friends bolstered her spirit, including a pink-clad group who just ran the Colors of Cancer 5K in her behalf.

“I am so blessed by this community,” she said. “I don’t think people understand how giving, supportive and amazing the people are who live here. I couldn’t imagine being sick and recovering anyplace else.”

She said regular meals, house cleaners, personal shoppers and words of encouragement lifted her spirits and blessed both she and Troy during her treatments.

Collin’s journey through cancer is not over. She has six surgeries scheduled in the next year and will take anticancer drugs for the next 10 years. She feels her mission now is to share hope, help others who are diagnosed with cancer and break the thought in her family that cancer is unbeatable.

“It is beatable, don’t let it get you down, stay strong,” she said. “Become a fighter and take control. Your faith and positivity will get you through.”

Blessings during the last year have been as abundant as the trials, she said. Watching her children fall in love, her son get married and having a new grandson are highlights of life that she’s thrilled to not have missed.

“Until you are faced with the possibility of death you don’t realize how important life is,” Collins said. “I value every sunrise and every sunset and I don’t miss an opportunity to say I love you. You live every day as if it were your last and cherish watching your family grow. It’s lovely to be alive and I don’t think I will ever take that for granted again.”

Troy Collins has painted an original piece of art that will be available for silent bids at the Colors of Cancer Art Show this Friday afternoon, Oct. 16, in Marcus Daly Memorial Hospital. Potential buyers can stop by to see his piece and bid or choose a “buy-it now” option on the Colors of Cancer Facebook page from noon to 5:30 p.m.

Stacie Duce, Director of Philanthropy for the Daly Hospital Foundation, said that the art show will include several pieces of fine art as well as dozens of framed pieces and “frame finds.” Jewelry and used books will also be for sale. She is accepting donations and will be at the main entrance of Marcus Daly Memorial Hospital accepting deliveries Wednesday, Oct. 14, until 4:30 p.m.

The used art show is managed by Lisa Heppner, another MDMH employee, who launched this event last year to benefit Team Sky Blue for prostate cancer. She said a rainbow of Colors of Cancer t-shirts will also be on sale for $5. All proceeds will benefit increased cancer services and patient assistance at Marcus Daly Memorial Hospital.

For more information on the Colors of Cancer campaign, visit the Facebook page, MDMH.org/colorsofcancer or call 406-375-4674. Donations are welcome at MDMH.org/GIVE and every dollar given during the month of October will be matched by the hospital.

The Stevensville United Methodist Church is providing daycare and help with online learning through their new ministry called Sapphire Early Learning Center. The program is free this fall.

Bitterroot Ecological Awareness Resources (BEAR) is offering its Cultural Food Festival, a taste of international food, with a pre-order deadline of Wednesday, Oct. 14, and curbside pick-up only on Sunday, Oct. 18.

No Empty Bowls luncheon this year but donations welcome

Due to the COVID-19 pandemic, Empty Bowls in the Bitterroot will not be holding their annual luncheon with locally baked bread and delicious soups this year but the need for food is still here. Contact clayworksbitterroot@gmail.com for more information.

Gina and Troy Collins stand on their back porch that faces the Bitterroot Mountains. “I am so blessed by this community,” Gina Collins said. “I don’t think people understand how giving and supportive and amazing the people are who live here.”

Gina and Troy Collins thank the supportive community. Troy Collins has painted an original piece of art that will be available for silent bids at the Colors of Cancer Art Show in Marcus Daly Memorial Hospital this Friday afternoon, Oct. 16. Potential buyers can stop by to see his piece and bid or choose a “buy-it now” option on the Colors of Cancer Facebook page from noon to 5:30 p.m.