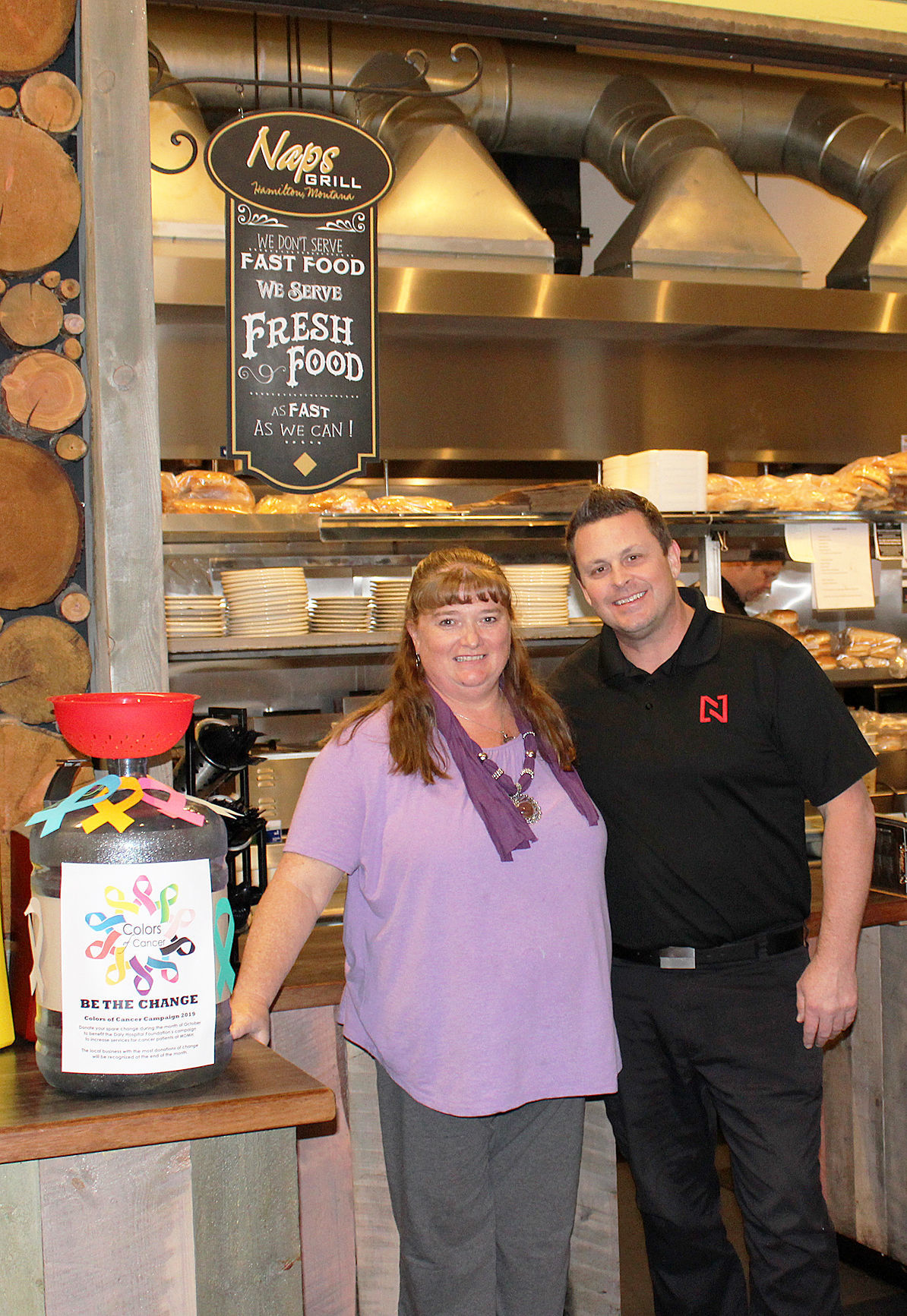 Brain cancer survivor Lori Meuchel stands with Naps Bar and Grill Owner Tyler Gilder in support of Colors of Cancer, Gray Team for brain cancer and Lavender for all cancers. 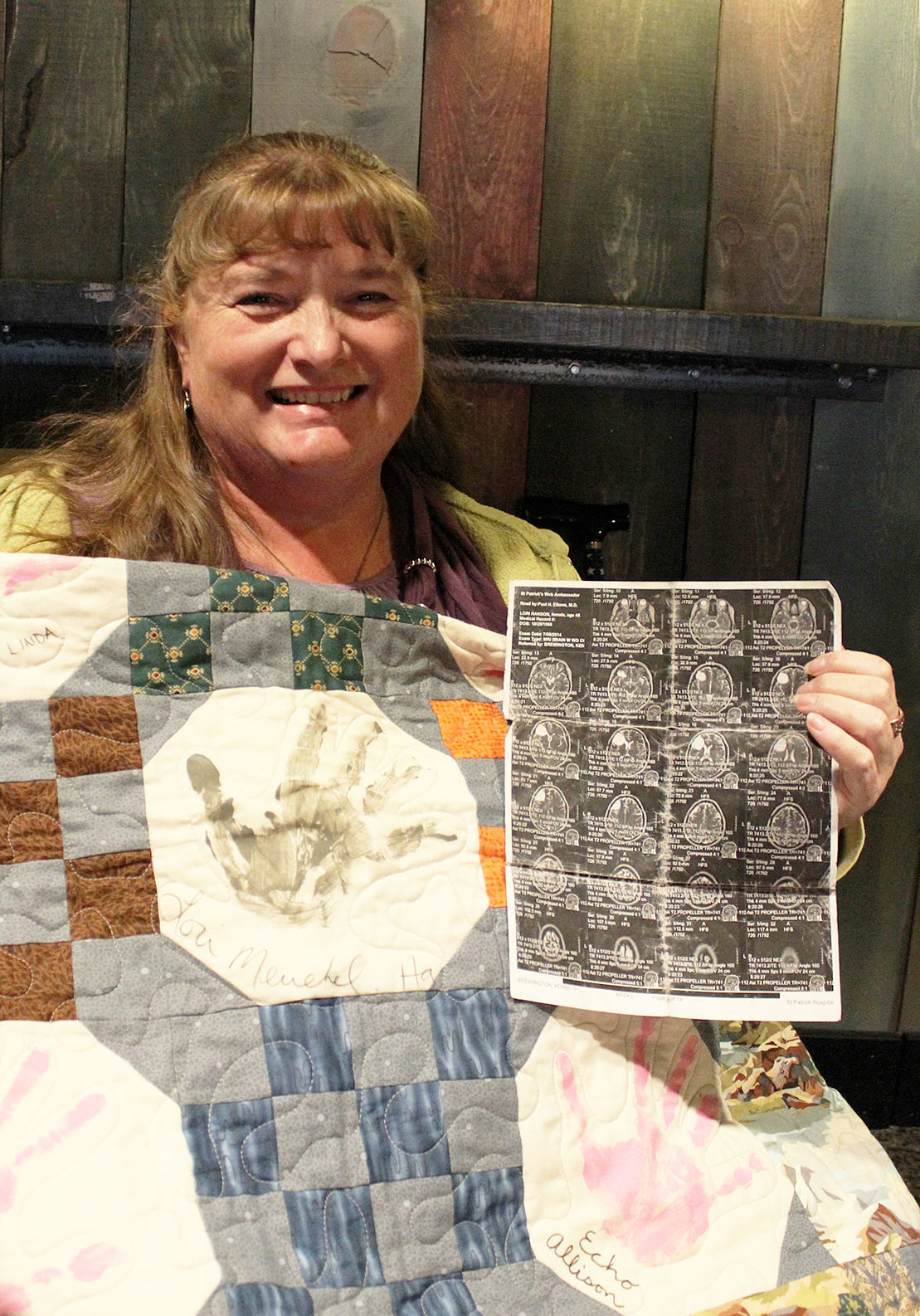 Brain cancer survivor Lori Meuchel holds her MRI showing the brain tumor they removed and the quilt with her handprint that will be on display all month at Cybernet1 as part of the Colors of Cancer Campaign in the Bitterroot Valley.

Lori Meuchel’s brain cancer story began while she was at work, six years ago in August.

As a 45-year-old preschool teacher, she had just completed visiting with a set of parents. While talking with her supervisor, she went blank for about 30 seconds.

He offered her a ride to the hospital.

Meuchel responded, “Let me get my purse.”

“I went to the hospital, signed the consent forms and went into seizures right there,” Meuchel said. “Dr. Urso and Dr. Adkins saved my life. I was not conscious but if it wasn’t for them I don’t know where I’d be today.”

The trip to the emergency room resulted in a life flight to St. Patrick Hospital in Missoula, the removal of a golf-ball-size tumor from her brain four days later followed by six months of oral chemotherapy to treat the residual tumor.

“I had a headache that day. I couldn’t remember the copy machine code just that day and couldn’t progress on to the next task,” Meuchel said. “But, I shrugged it off — I am a mother and a preschool teacher, who doesn’t have a headache? I did tell the ladies I work with that I was fine, just needed to sneeze.”

Meuchel said that she learned brain cancer tumors are gray, which is the same color as the brain.

“To me, that blew my whole mind,” she said. “The surgeon didn’t get too aggressive because it was near my speech center. I didn’t have to do any physical therapy or relearn how to speak.”

Her chemotherapy meant taking a pill once a week.

“The day I took the pill I was totally sick. Lettuce was the worst, the taste was terrible, and I was trying to eat healthily,” Meuchel said. “I craved barbecue and pomegranates, but lettuce — no. I had two children at home and wanted to prove they could win any battle, even if it is cancer. I was bound and determined to beat it because I was too scared not to.”

Other than a scar that her hair mostly covers there are no telltale signs of her battle against cancer.

“So, they gave me pictures,” she said. “The MRI (Magnetic Resonance Imaging) shows the white as the brain cancer, they figured that thing had been growing from three to five years. Then in the next series of images the area is black – where the tumor was removed. When I forget something I say, ‘oh, it went to the back hole, never to be seen again.’”

She does have some memory loss and finds it difficult to remember “little things.”

“The surgeon said, ‘Once you open your brain to the air you will have some memory loss,’” Meuchel said. “Most moms know where their kids are going, their schedule, what’s in the refrigerator and what they need to buy at the store. I don’t remember those details but I found that if I say it out loud, I remember better.”

She went back to teaching preschool 10-days after brain surgery because “kids are the best medicine,” has been cancer-free for five years and is now 50-years-old.

“I’m thrilled to tell people my age — I’m still here,” Meuchel said. “It’s all by the grace of God. I give all the glory to God. I get checked once a year and I hold my breath, I want the picture of it gone. It is on my mind all the time.”

Her family has all had cancer and all different kinds, so she wears lavender and is on Team Lavender representing all cancers with Captain Shannon Urso.

“I figured I’d get it,” she said. “All my grandparents, aunts, uncles, cousins have all had cancer — colon, stomach, skin, breast and a different type of brain tumor, a childhood brain tumor that in adulthood has grown to cause problems. I know cancer doesn’t play fair so I said, ‘get it out of my head.’”

She participated in the fun run 5K last year as part of the Colors of Cancer awareness and fundraising effort. After the survivor lap, she left a handprint on white fabric that would become a quilt. The silent auction quilt with her handprint and others will be on display at Cybernet 1 for October. To see all the quilts, handmade by Mary Woods, visit Hamilton Gifts, Mineshaft Pasty Col. Hamilton’s Marketplace and Ravalli County Federal Credit Union.

“The quilts turned out wonderful,” Meuchel said. “All of us are touched by cancer, if you’re not they just haven’t found it yet. My handprint is gray as brain cancer is represented by the gray ribbon for gray matter.”

Tyler Gilder, owner of Naps Bar and Grill, said he is proud to sponsor the Gray team, the Brain Cancer team, for Colors of Cancer Campaign in the Bitterroot Valley.

“I have a really close friend of mine who I worked with in California whose wife just got diagnosed with brain cancer, so it has been a real big deal for him and his family,” Gilder said. “I’m supporting a good cause and showing him support all the way to California from Montana. It hits home for sure.”

Gilder and Meuchel are new acquaintances.

Naps Bar and Grill is hosting a pint night 6 to 9 p.m. every Saturday night in October with a portion of each pint going into the Colors of Cancer fund. All pints are $4 and specialty October Fest beers have been brought in and are paired with a trio of sausage sliders — Italian sausage, Polish sausage and bratwurst. A percent of the proceeds of the food sales will be donated to Colors of Cancer.

Naps is hosting a jar for coin donations to Colors of Cancer.

“It is always nice to team up with Marcus Daly,” Gilder said. “They are a great fixture in the community and they are doing so many great things. What a great deal for the community to have them. We like to help them out any way possible.”

All funds raised during the Color of Cancer month-long campaign will be matched by Marcus Daly Memorial Hospital and donated to the Daly Hospital Foundation. For the full list of events, prizes, sales and opportunities to participate visit www.mdmh.org and scroll down to Color of Cancer Events.

There are opportunities to do laundry and participate in bell ringing at The Salvation Army in Hamilton.

Bitterroot Valley Elks Lodge #1651 Benevolent and Protective Order of Elks (BPOE) in Hamilton is having an open house on Oct. 25 after being c…

Brain cancer survivor Lori Meuchel stands with Naps Bar and Grill Owner Tyler Gilder in support of Colors of Cancer, Gray Team for brain cancer and Lavender for all cancers.

Brain cancer survivor Lori Meuchel holds her MRI showing the brain tumor they removed and the quilt with her handprint that will be on display all month at Cybernet1 as part of the Colors of Cancer Campaign in the Bitterroot Valley.