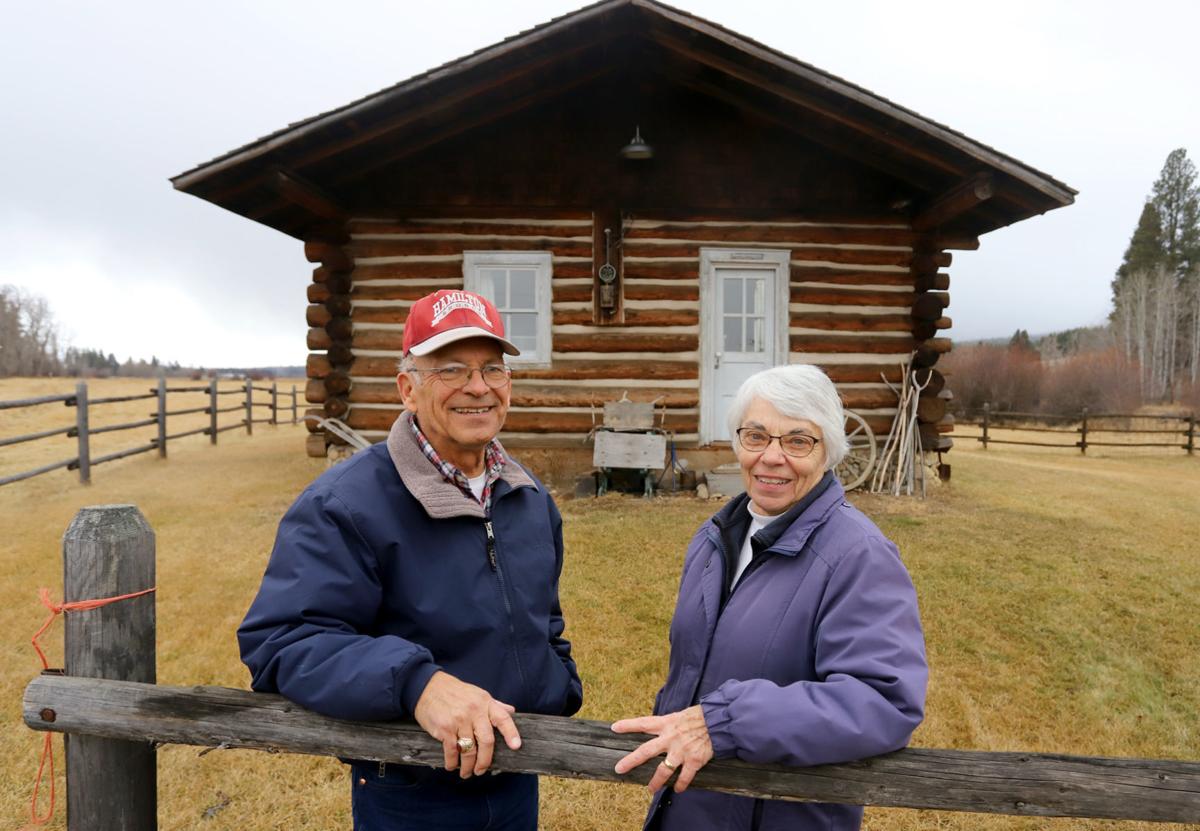 Dan and Cheryl Rothlisberger stand in front of the McCrossin Cabin, located south of Hamilton. The couple have spent years restoring the historic building that dates to the early 1900s. It was recently placed on the National Register of Historic Places. 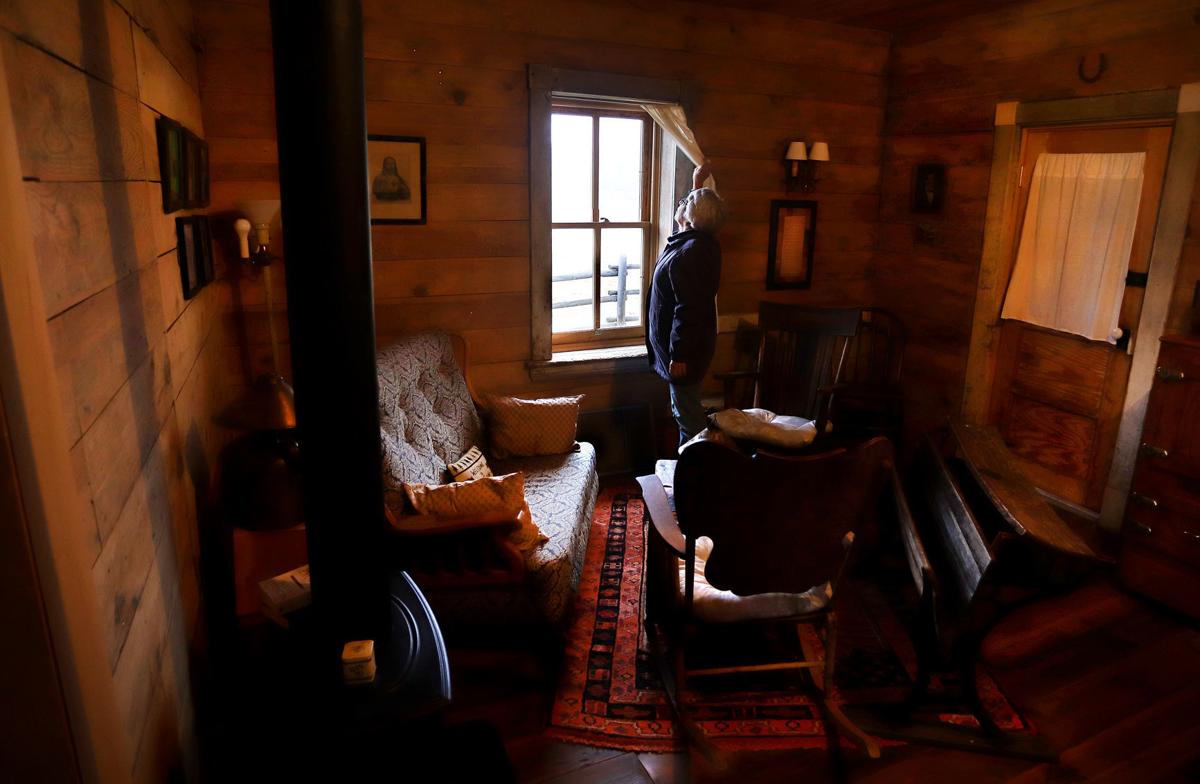 Cheryl Rothlisberger prepares to close to curtains hanging inside the McCrossin Cabin. 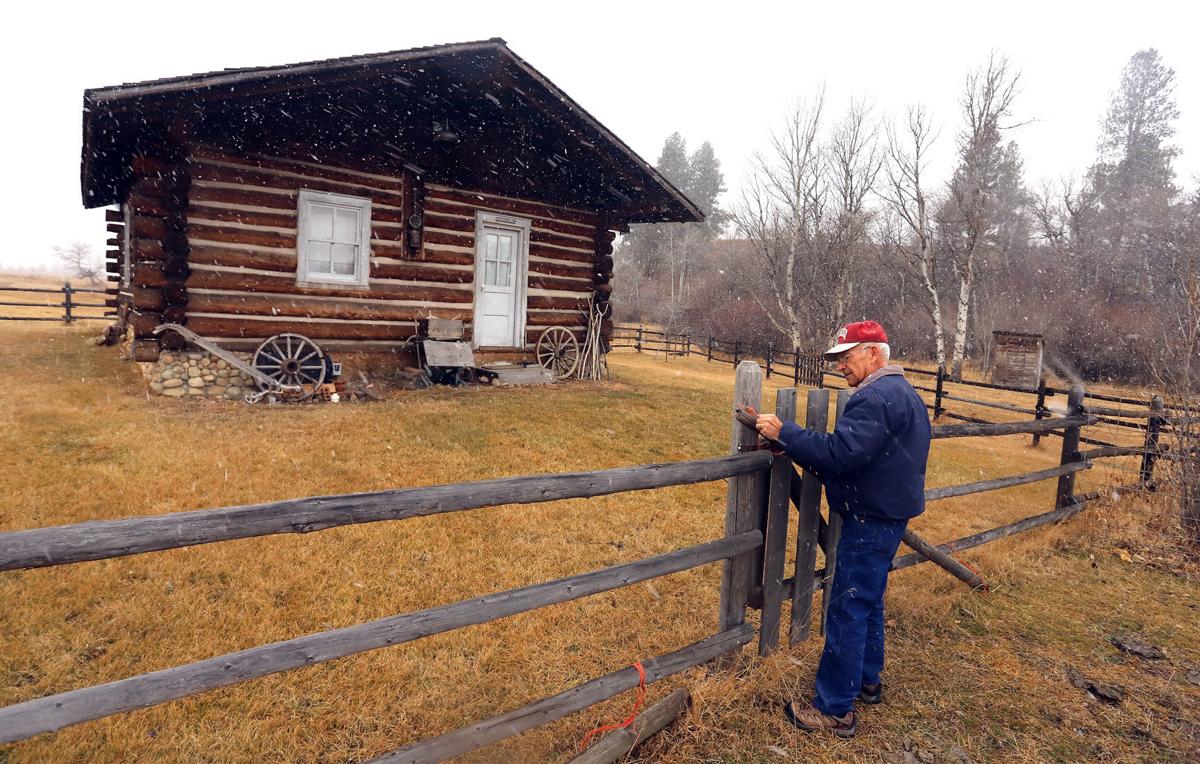 Dan Rothlisberger closes up the gate leading to the historic McCrossin Cabin.

James McCrossin first came to the Bitterroot Valley aboard the Northern Pacific Railroad.

No one can say for certain exactly when he first arrived. Some say it could have been as early as 1902, but his name didn’t appear in any local records until three years past that when he filed a $7 claim against the county for road work.

In 1907, the 30-year-old McCrossin fell in love with a 17-year-old from Lawrence County, Missouri. Ethel Likins’ family had moved to the Bitterroot about the same time as McCrossin. Soon after their wedding, the couple moved into a cabin that James had built near Grantsdale, just north of the Gold Creek Loop Road and six miles south of Hamilton.

Once again the history is lost on why he picked that location.

The land was owned by a couple from Oregon. No one knows if he had their permission to build there or if he just decided the spot with its sweeping view of the Como Peaks was too pretty to pass by.

All that’s known for sure is the rustic, two-room cabin with no electricity or indoor plumbing would be the family’s home for the next four years, during which their second child was born.

It’s doubtful that McCrossin ever gave his legacy a thought when he carefully crafted the two-room cabin with its twin gables from wood purchased from the Anaconda Mining Company's "Big Mill," located on Hamilton's Main Street.

There’s no way back then this immigrant from Canada could have known that his name would end up in the history books.

But that’s exactly what happened on Dec. 6 when the James McCrossin Cabin officially found its place on the National Register of Historic Places.

The journey toward that end began decades ago when a young girl joined her father to visit the hired men who lived in the cabin in the 1950s.

Cheryl (Foss) Rothlisberger can still remember those trips with her father, Sam Foss.

“I remember going into the cabin when I was very young, maybe 6 or so,” Cheryl Rothlisberger said. “My dad used the cabin as the hired man’s living quarters. It was dirty, smoky and it smelled bad in there. … One old guy, Paul, would hang his beaver and muskrat pelts on the wall, which I imagine enhanced the smell.”

Cheryl and her husband, Dan, inherited the land, which included the cabin, from her parents.

By that time, the historic cabin was nearing its end. After her parents had moved to Hamilton in 1957, the cabin became a shed.

“People can remember driving by and seeing the cows sticking their heads out of the windows,” she said. “You can still see places on the window frames where the cows have chewed.”

While the couple was still traveling the world following Dan’s career with the U.S. Army, they decided the cabin was worth saving. In 1999, they found an older gentleman who said he knew how to preserve old buildings and, following a handshake deal, the cabin that had been home to the McCrossins and many other longtime Bitterroot families began its second life.

“We didn’t really know what would be involved with preserving it,” Dan Rothlisberger said. “We were still back East when we decided to restore it.”

The man wrapped cables around the building and moved it off the logs that were rotting next to the ground. He built a new foundation and carefully put it back on its new forever home.

But that was only the first part of a multiyear project that offered the Rothlisbergers plenty to do in their first years of retirement. A photo album documents the journey, with pictures of Dan working a shovel to clear out the cow manure and Cheryl donning a mask as she sanded the lead-based paint from its walls.

Along the way, there were many interesting discoveries. Those ranged from the old snus cans the old-timers used to cap the knots in the wood in an effort to keep the wind at bay, and the unexplained bullet holes in one of the walls.

“While we working, we had so many people comment on how much they love that old cabin and how happy they were that we saved it,” Cheryl Rothlisberger said. “They were always stopping in and saying ‘Oh, I see this cabin every day when I’m driving from Hamilton to Darby. I’m so glad it’s still here.’”

“You would think that with the history of the frontier and all the cabins that were built back then that there would be a lot, but there’s really not,” Boughton said. “They’re just not that common.”

The McCrossin Cabin is even more unusual than most of the others that have survived by the fact that it has a two-gable extension off each end. Boughton said the Rocky Mountain Style Cabin design is very unusual and likely may have been enough to make it worthy of the inclusion on the National Register.

Beyond that, Boughton said the Rothlisbergers have done a great deal of work putting together its history, including all of the occupants who lived there between the McCrossin and Foss family ownerships.

“Dan and Cheryl have really resurrected this cabin from the dead,” he said. “It’s been great that they’ve taken it under their wing.… They are very proud of it and they should be. With the work that they’ve done, it hopefully will stand for another 100 years.”

The Rothlisbergers said the cabin that provided shelter for those with very little is an interesting contrast to the Daly Mansion.

“Within eight miles of each other, you have the housing for the haves and the have-nots,” Dan Rothlisberger said. “Somewhere in the middle, you have Hamilton. We celebrate the mansion and make it a destination for people to come to marvel at what high-class living was like back then, and then they would drive by, without much notice, this nearly falling-down old cabin.”

“We decided we needed to restore it before it’s too late,” he said. “So many people stop and take a photo here. With the Como Peaks in the background and the cabin in the foreground, to them this is the Bitterroot and it's Montana. It is a symbol of who we are. We said we just can’t let that fall to ruins.”

The Rennaker family has found its place on the Montana Pro Rodeo Hall and Wall of Fame.

Just before Christmas, Tony and Anna Hudson decided they were going to give the gift of life to a couple of young men that they had never met before.

The Bitter Root Humane Association is working to find good homes for huskies that were rescued in December.

Construction of a new Bitter Root Humane Association shelter in Hamilton is on hold while awaiting a resolution to a lawsuit filed by neighbors.

Dan and Cheryl Rothlisberger stand in front of the McCrossin Cabin, located south of Hamilton. The couple have spent years restoring the historic building that dates to the early 1900s. It was recently placed on the National Register of Historic Places.

Cheryl Rothlisberger prepares to close to curtains hanging inside the McCrossin Cabin.

Dan Rothlisberger closes up the gate leading to the historic McCrossin Cabin.