Claiming the recall effort was organized by a small group of citizens who have “battled the mayor and his administration through antics of obstruction and bullying for over two years,” Dewey wants the district court to step in to stop the recall election.

The recall petition was filed by Stevensville resident Leanna Rodabaugh. It alleged that Dewey violated his oath of office by signing a $79,000 IT contract last December that wasn’t authorized by the Town Council or reviewed by the county attorney.

Rodabaugh and other supporters were required to obtain signatures from 20% of the town’s electorate to place the recall election on the ballot. They needed 251 signatures. 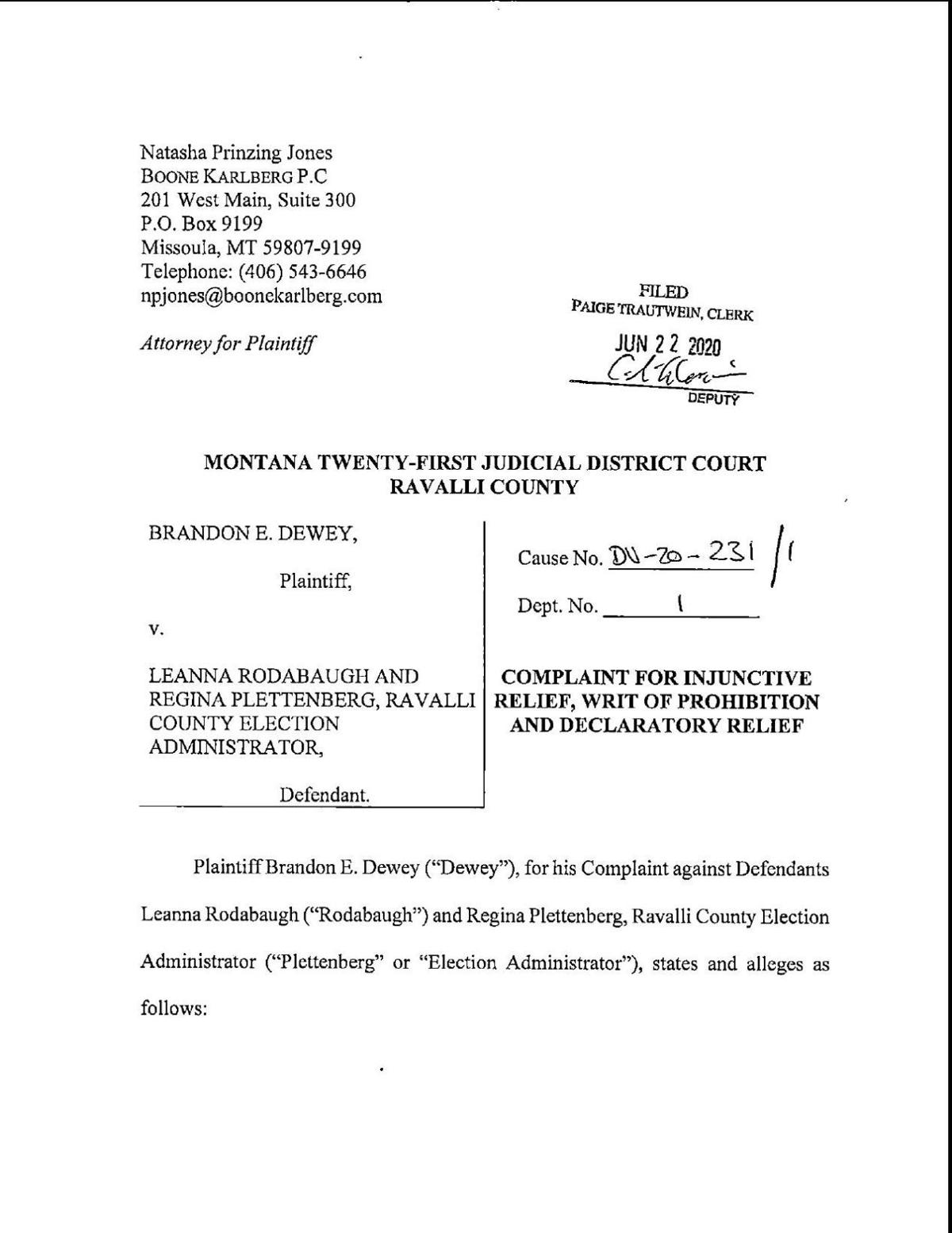 Dewey’s suit said the allegations were false and “made recklessly to mislead the citizens of Stevensville.”

The suit provides a narrative on how the mayor came to execute a contract for the IT service with First Call Computer Solutions and claimed the recall petition included misleading information.

Dewey’s suit claims he solicited quotes from multiple information technology service vendors after the town received no bids on its initial request in May 2019 for the service.

First Call Computer Solutions was the only company to offer the mayor a quote. After the Town Council approved its 2020 budget with a line allotting a budget for IT services, Dewey said, in his capacity as mayor, he executed a non-binding contract with the company that included an on-boarding fee of $4,200 and a monthly fee of $2,100 for coverage of eight departments.

Dewey’s suit said the recall petition said the contract totaled $79,800 without providing context that was the bill for a three-year time period and there was an onboarding fee.

“Rodabaugh’s statements are false and were made recklessly to mislead the citizens of Stevensville so residents in Stevensville would be more inclined to sign the recall petition,” the lawsuit read.

Dewey’s suit claims the mayor has the authority to enter into professional service agreements under the town’s purchasing policy and Montana law.

The Town Council passed a motion to reject the IT contract on March 12. After receiving no bids for the second request for IT services, the council opted to hire the company Dewey had offered a contract to. According to Dewey’s suit, the company now provides IT services to the town on a month-to-month basis.

Dewey’s suit asks for an injunction or a writ of prohibition to stop the recall election. He also seeks a declaration saying there were no legal grounds for the recall petition. The suit seeks legal fees from Rodabaugh.

Rodabaugh said Friday that she wasn’t surprised by the lawsuit.

“I was expecting some kind of issue to arise,” she said. “They mayor specializes in deflection. It’s not his fault. It’s yours.”

Rodabaugh said earlier that she didn’t have a problem getting the number of signatures she needed to get the recall election on the ballot.

“Right now, there’s so much anger in the community,” she said. “There were two police officers with wands checking everyone who entered this week’s council meeting. That’s the attitude right now in this town.”

On Friday, Plettenberg said she plans to move forward with the recall election until she hears something different from the court.

Plettenberg said the form of the recall petition — which outlines the reason for the request for recall — was reviewed by the county attorney’s office. Plettenberg’s office focused on verifying signatures.

The special election is currently scheduled for Aug. 4.

The ballot will include a statement from the recall petition. Dewey will also be able to write a 200-word statement that will appear on the mail ballot that will go to voters sometime in July.

The Ravalli County sheriff's office is investigating what appears to be a series of dog poisonings in the Lone Rock area northeast of Stevensville.

Artists from many parts of Montana gathered last week along the banks of the Bitterroot River to share their vision of what soon will be Hamilton’s newest park.

Ravalli County has about 380 tourist lodging facilities than range from hotels and bed and breakfasts to guest ranches, lodges and vacation rentals.

Gold-Butterfly: Bitterroot Forest prepares for work to begin on largest project in memory

New 'invisible fiber' will change the way we eat food

New 'invisible fiber' will change the way we eat food