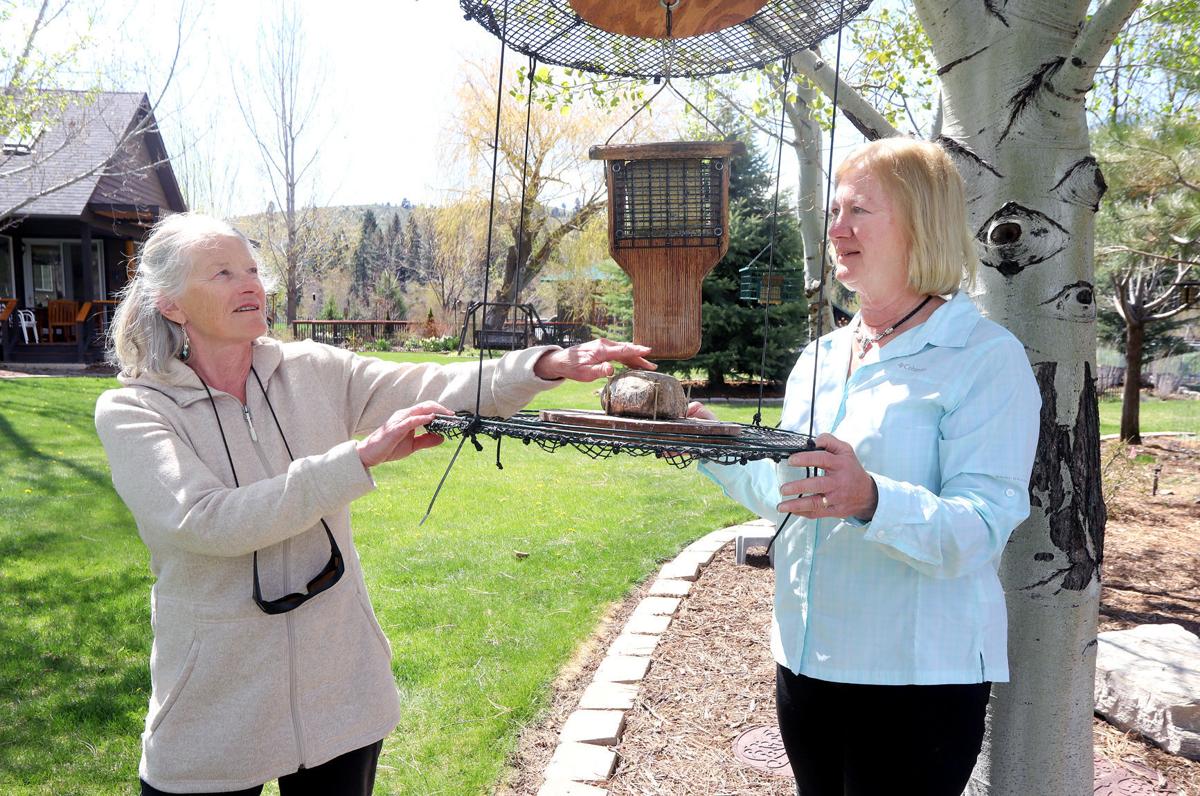 Hamilton-area neighbors Estelle Shuttleworth and Barb Garten take a look at the replica trap that could help MPG Ranch researchers capture Lewis's woodpeckers this year. The captured birds will be banded and fitted with a nanotag as part of a research effort to learn more about the birds that are considered a species of concern in Montana. 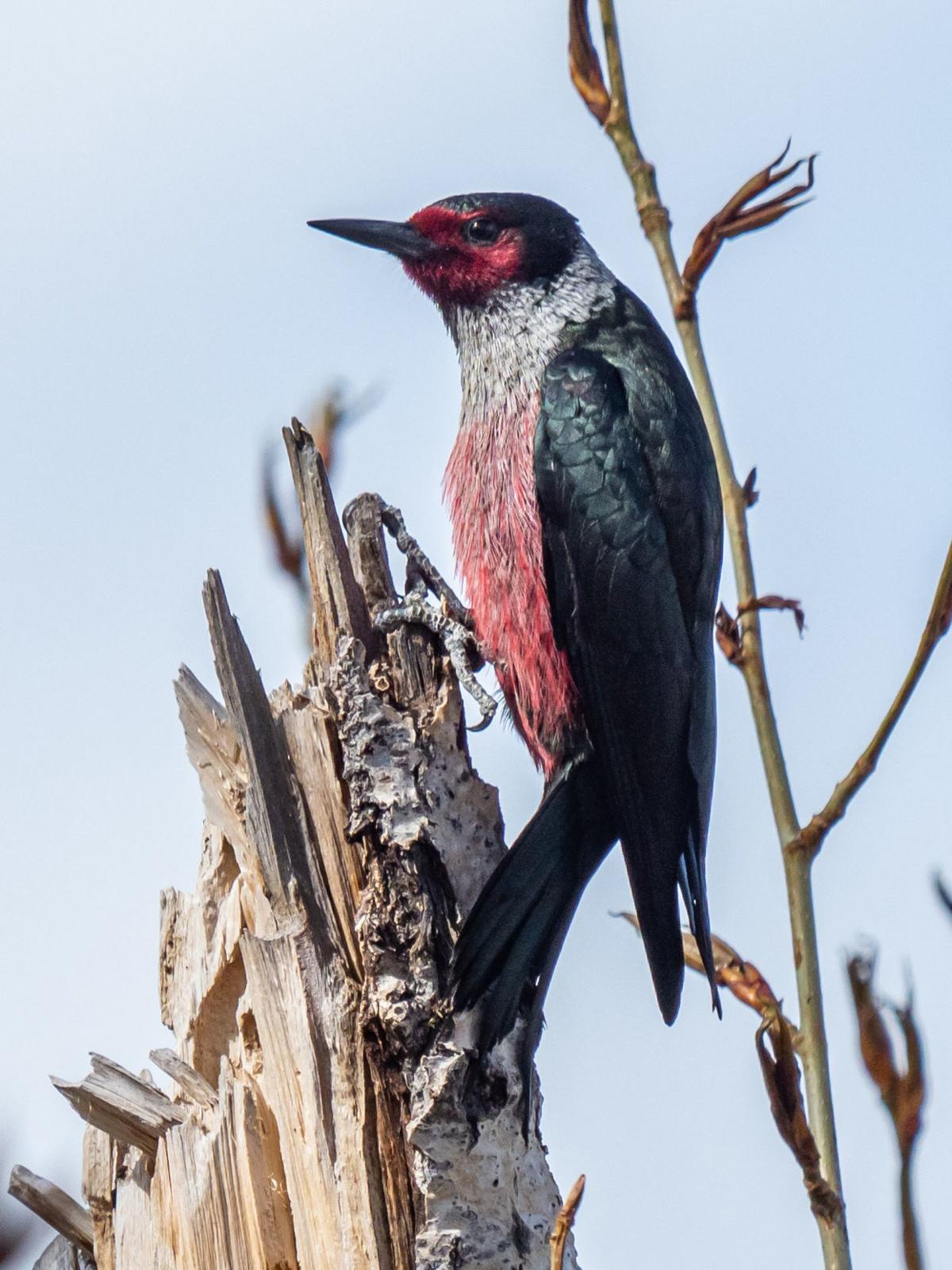 Barb Garten of Hamilton spotted her first Lewis's woodpecker on Thursday near her home south of town. Garten and her neighbor, Estelle Shuttleworth, serve as citizen scientists as part of a MPG Ranch research project on the woodpecker that's a common sight in the Bitterroot Valley. 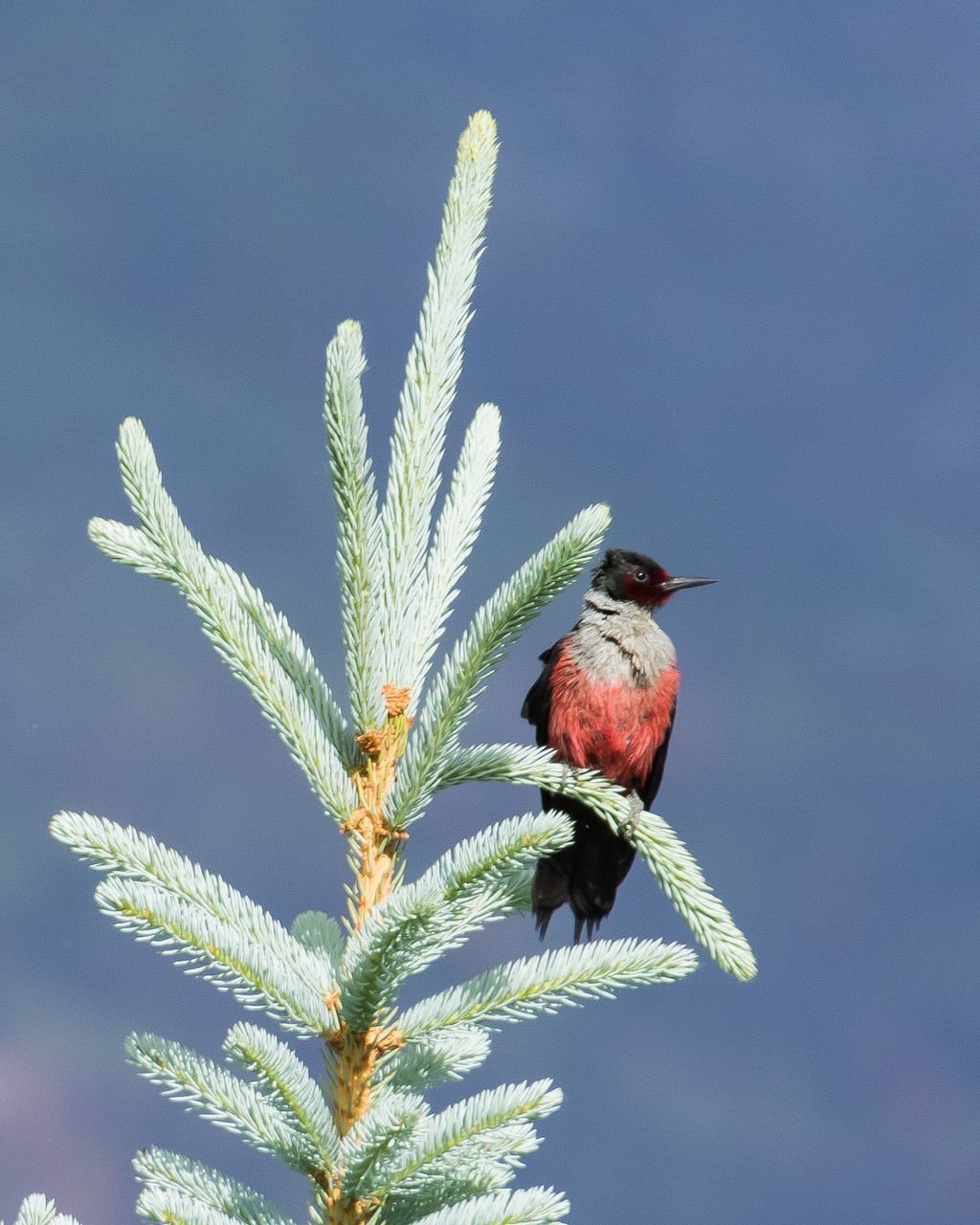 While the Lewis’s woodpecker is on Montana’s species of concern list and large-scale bird surveys suggest they are a species in decline, they seem to thrive in the Bitterroot Valley.

The Lewis's woodpeckers are back in the Bitterroot.

And a pair of citizen scientists who live just south of Hamilton couldn’t be happier.

Barb Garten and Estelle Shuttleworth are neighbors with a knack for producing beautiful photographs of birds.

On Friday morning, the pair met in Shuttleworth’s sunroom to share their adventures of monitoring the surprisingly colorful woodpecker that often goes unnoticed by the general public. Both volunteer to help MPG Ranch researcher Kate Stone study the natural history of the unusual bird.

They’ve been waiting for its return.

The day before, Garten was out for a walk when she heard a familiar sound.

“They make this excited chatter when they all start to fight each other over a nesting site,” Garten said. “I could hear that noise. It was very loud. And I thought to myself, ‘They’re here.’”

She soon spotted a group of three males fighting over a nesting cavity already occupied by a female woodpecker. Taking advantage of perfect light, Garten captured the scene with her camera.

“I watched them for the longest time yesterday fighting over this one cavity,” she said. “The female was inside there and then all of a sudden, there was all this squawking and the female popped out and took off. I wondered if it was because its mate wasn’t the winner.”

Just as she finished her story, Shuttleworth jumped up to run grab her binoculars.

There, at the suet feeder hanging in an aspen tree, she spotted her first Lewis’s woodpecker of the season.

“Woo-hoo. He’s there,” Shuttleworth said, with a smile.

Their excitement over the bird’s arrival would have come as no surprise to the longtime MPG Ranch researcher who has worked with citizen scientists on a variety of research projects in the Bitterroot Valley over the years.

In particular, Stone understands the allure of the Lewis’s woodpecker.

She started studying the woodpecker that hardly ever pecks wood back in 2010 as one of the first research projects undertaken by the MPG Ranch. The ranch’s owner was “super fascinated” with the bird that seemed to be faring well in the Bitterroot River floodplain on the ranch property.

“I was hooked on them as soon as we started,” Stone said. “Their colors are just crazy. “They are like this iridescent dark green with a watermelon-pink belly, a red mask and a collar. They are very odd looking.”

While the Lewis’s woodpecker is on Montana’s species of concern list, and large-scale bird surveys suggest they are a species in decline, they seem to thrive in the Bitterroot Valley.

“We have one of the densest breeding population there is in Montana,” Stone said. “They are all along the river. I’ve floated from Stevensville to Florence and seen over 60. They are a really common bird that people don’t notice. In the shadows, they just kind of look black like a starling.

“As soon as you stop and watch them for a while, you discover that they are a fascinating bird,” she said. “Everything about their natural history is fascinating.

“They are a woodpecker that doesn’t really peck wood,” Stone said. “Compared to other woodpeckers, they have a weak bill. They spend most of their time in the Bitterroot catching insects near the river. Once the berries and other fruit begin to ripen, they switch over to feed on serviceberries and hawthorns.”

While most of the Bitterroot Valley’s woodpeckers live here year-round, the Lewis’s woodpecker migrates after the insects and berries disappear.

“They migrate to places unknown,” Stone said. “Beyond learning about their natural history while they’re here in the Bitterroot, that’s something else we’re studying.”

The MPG Ranch study — which includes two master’s projects — has monitored more than 300 nest sites. They’ve learned the birds prefer mature dead trees, like those giant cottonwoods found along the river or the big ponderosa pine snags in forests that have been burned over.

Starting in 2014, the researchers have been capturing and color-banding birds.

That part of the project has come with its own surprises. The researchers expected to see birds with a successful nest return to the same nesting site.

As of now, the researchers don’t know why.

The research team is deploying a relatively new technology called nanotagging to track the birds' flight patterns both here in the Bitterroot and beyond.

The nanotags are similar to the old-school radio tags scientists have used for years to study other wildlife. They emit a signal at the same frequency. Individuals are identified by the pattern of that signal, which is sort of like Morse code.

The signals are tracked on a network of MOTUS stations that have been established throughout the Bitterroot Valley. Those stations are part of a much larger network that ranges from the East Coast, across Canada and through the intermountain West.

New collaborators are in the process of installing additional MOTUS stations Idaho’s Snake River Plain and in locations in Washington, Oregon and California.

The growing team of citizen scientists in the valley is helping in that effort.

MPG's research team has color-banded 61 birds so far. Seventeen of those were captured off the ranch, including at Shuttleworth’s home.

“We have banded birds from Sleeping Child to Lolo,” Stone said. “We would like to get more. We would certainly like to work with people willing to let us come to their feeders to capture them. If people don’t feel comfortable with that, they can observe the birds on their feeders and nests and tell us what they see. That’s super useful information.”

“To me, knowledge is power,” Shuttleworth said. “The importance of citizen scientists is that you can’t have your biologists everywhere. Many of us know things because it’s in our own little habitat that is invaluable for them to learn and broaden what they know. From there, people can make intelligent choices.”

Both women volunteered to help with MPG’s eagle project before they began observing Lewis’s woodpeckers. Neither had known a thing about the bird before Stone asked them if they would like to participate.

“She asked us as if we would be doing her a favor by helping out,” Garten said. “But honestly, she’s doing us a favor by allowing us to participate in this study. I had no idea what they even looked like before this. I have learned a lot about birding since we started this. It’s really sparked my interest.”

Sometime between the evening of April 28 and the early morning hours of April 29 someone painted graffiti on the skatepark.

Ravalli County Elections Administrator Regina Plettenberg said Friday, May 1, would be the last day voters should mail their ballots.

U.S. District Court Judge Dana Christensen said the group failed to show that it would be harmed by allowing the project to move forward.

Watch this: Corvallis Memorial Day Parade reverts to its roots

The Corvallis American Legion Post #91 and Auxiliary Unit #91 that will limit its Memorial Day parade to the marching of its honor guard down Main Street.

People feared coronavirus restrictions would end a 28-year tradition. But the Bitterroot's Fourth Grade Farm Fair will go on — online, that is.

Marcus Daly Memorial Hospital has begun phasing in elective surgeries that have been on hold since the onset of the novel coronavirus pandemic.

Ravalli County voters liked the idea of a creating an independent community college district, but the levy to pay for it failed in Tuesday’s school election.

Despite challenges from the COVID-19 pandemic, Bitterroot National Forests officials plan to have the most popular campgrounds open by Memorial Day.

The future of a new community college in Ravalli County is in the state Legislature’s hands now.

Hamilton-area neighbors Estelle Shuttleworth and Barb Garten take a look at the replica trap that could help MPG Ranch researchers capture Lewis's woodpeckers this year. The captured birds will be banded and fitted with a nanotag as part of a research effort to learn more about the birds that are considered a species of concern in Montana.

Barb Garten of Hamilton spotted her first Lewis's woodpecker on Thursday near her home south of town. Garten and her neighbor, Estelle Shuttleworth, serve as citizen scientists as part of a MPG Ranch research project on the woodpecker that's a common sight in the Bitterroot Valley.

While the Lewis’s woodpecker is on Montana’s species of concern list and large-scale bird surveys suggest they are a species in decline, they seem to thrive in the Bitterroot Valley.