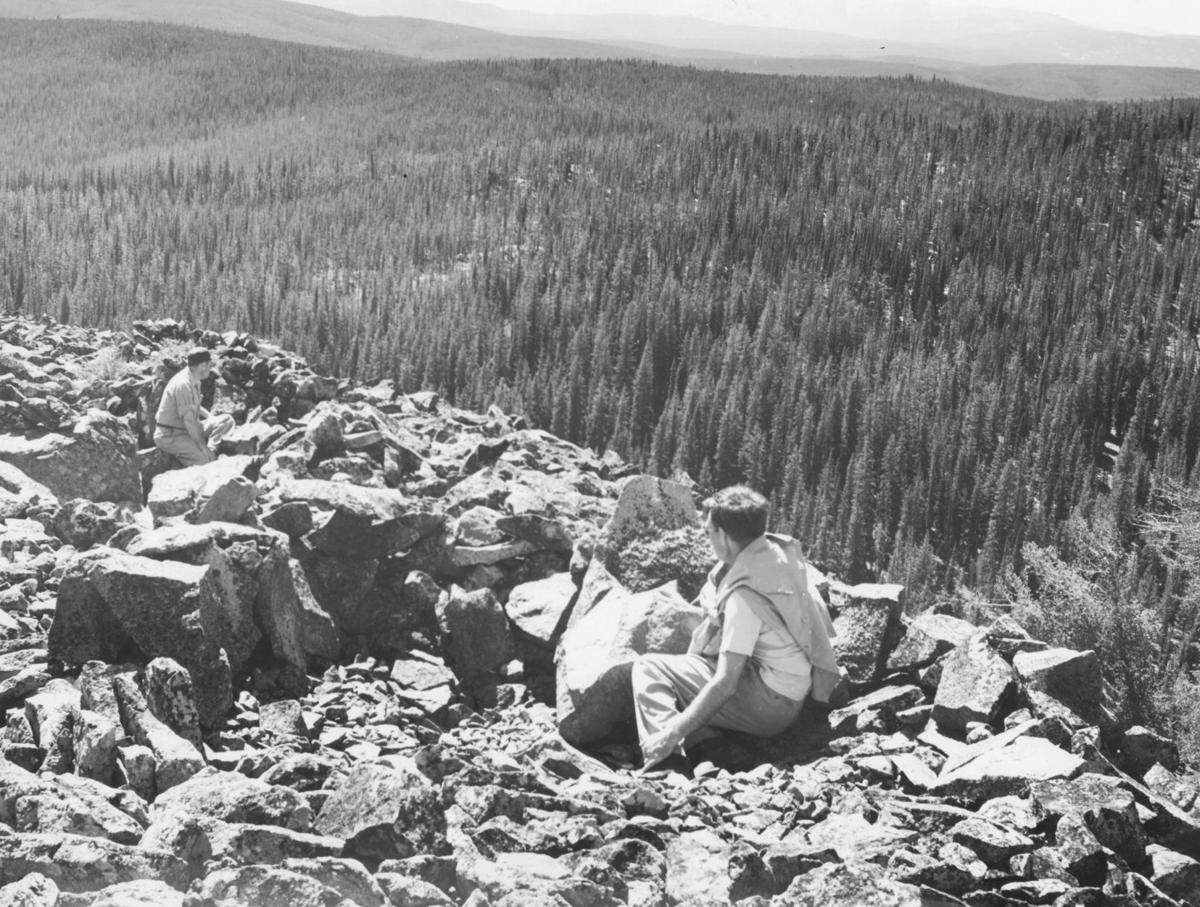 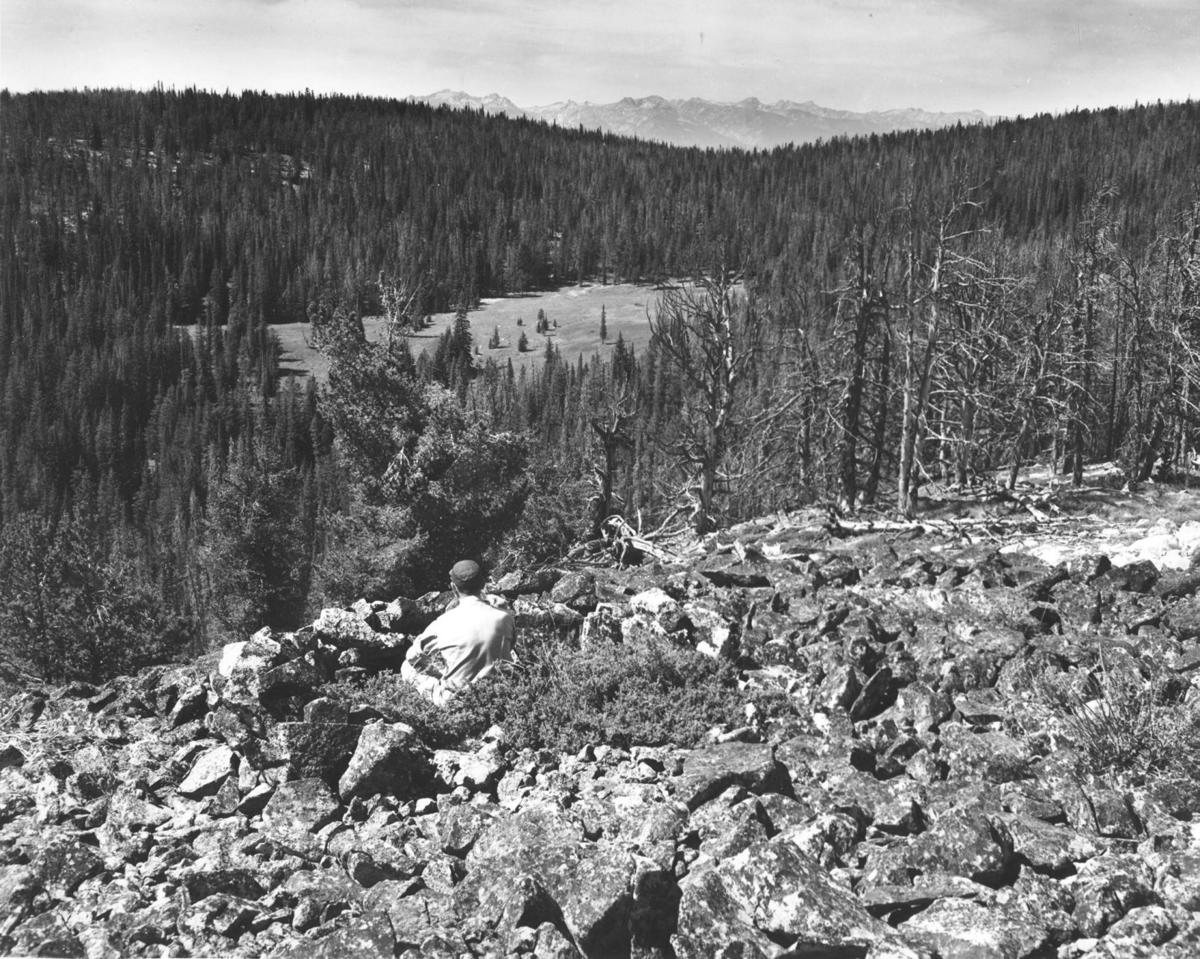 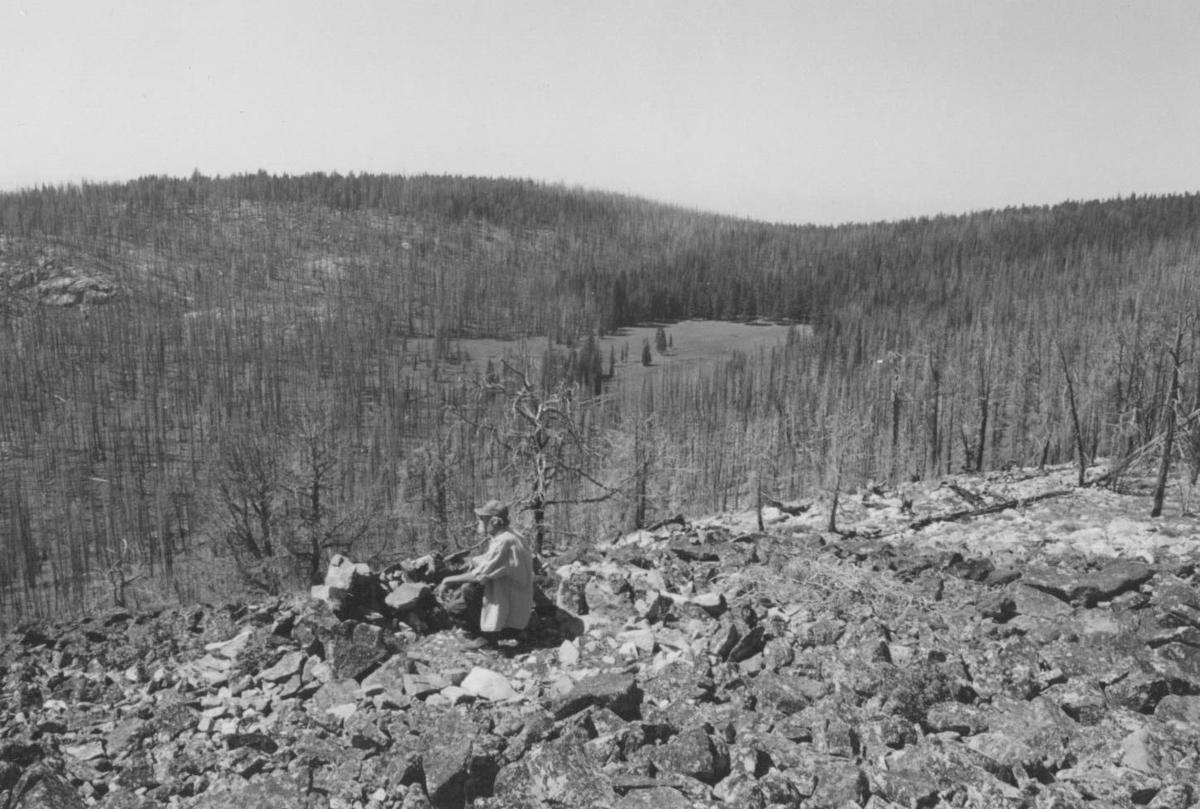 Scanning the skyline 60 years after Ernst Peterson’s first visit to the stone forts. 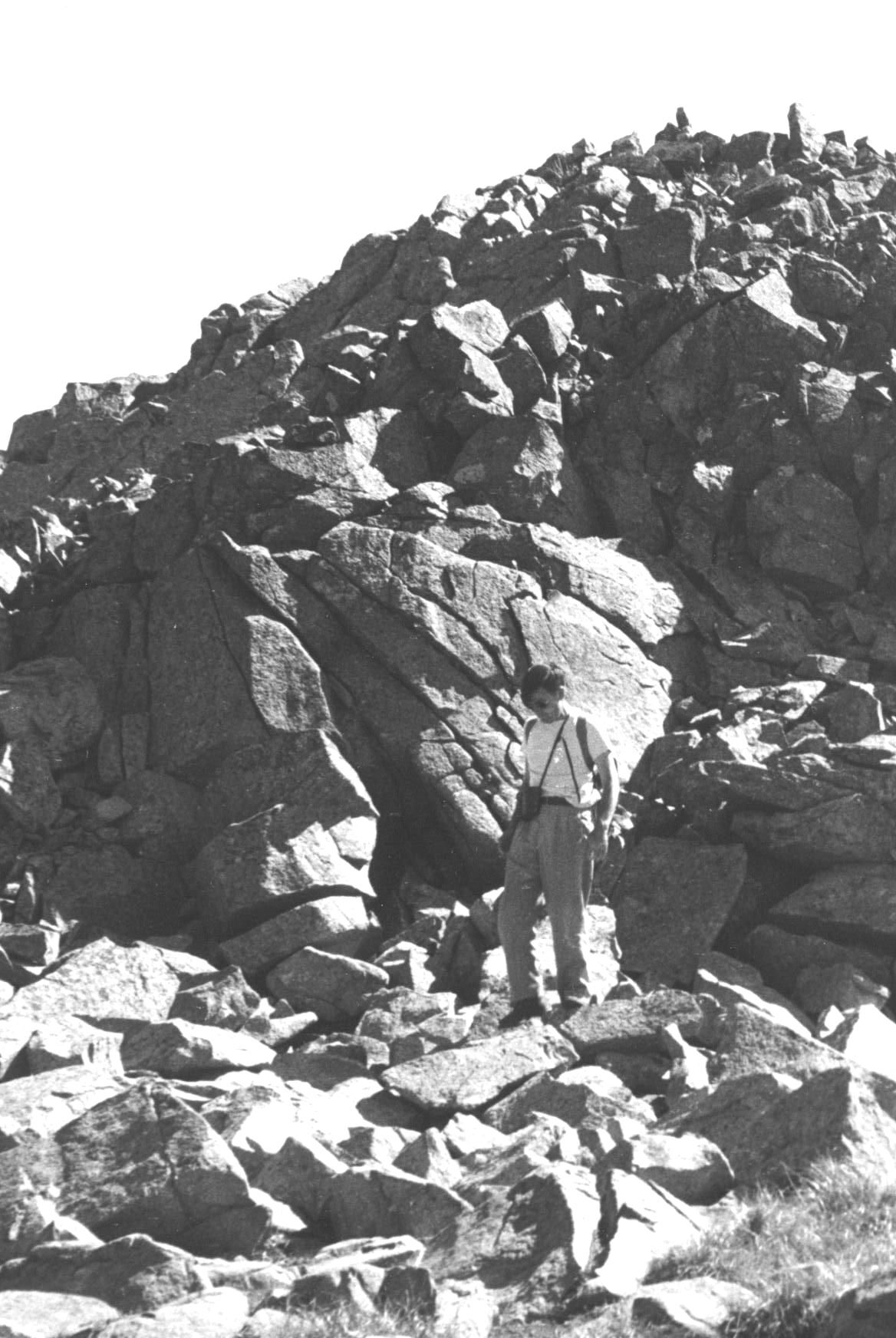 A number of years ago, when I first started volunteering at the Ravalli County Museum, I came across an intriguing photo taken by a legendary local photographer named Ernst Peterson.

The picture showed a man with his back to the camera, crouched in a stony circular perch looking out towards a small gently sloping meadow. My job at the time was to identify and catalog hundreds of historical photos that had yet to be entered into the system.

A couple of wise and well-seasoned older gentlemen shared the job of trying to identify the assortment of photos, many of which came with little or no information. On this occasion both of my cohorts were completely baffled by the photo in question.

The only solid lead we had to go on was that it was definitely a Peterson photo. I filed the picture under the heading of Mountain Landscapes, and mentally added it to my list of odd things to investigate.

Nearly a year passed, and it seemed as if there would be no resolution to the problem of locating the site. Then, while pursuing an entirely different subject, I came across a short article entitled “The Mysterious Fort” by Ernst Peterson, and the photo published with the story was identical to the one we were trying to identify!

With a current Forest Service map and a copy of the Peterson article in hand, I soon zeroed in on a possible location of the phantom fort on the Continental Divide, near the western border of the Anaconda-Pintlar Wilderness.

Enlisting the company of a couple of enthusiastic friends, we set out in the summer of 2001 with the full intention of finally locating the mysterious fort. We soon discovered however that the area had been scorched by wildfires the year before and the landscape had been drastically altered as a result.

Still, we felt certain that we were in the right area when we came out along the lower edge of the small meadow shown in the photograph. The long low saddle depicted in the photo appeared invitingly above us to the west, even more distinguishable now that the timber had been burned across the width of it.

A string of solitary rock outcrops were visible along the horizon standing in sharp contrast to the burned timber, but none of them looked like they might be concealing stone forts. A large rocky knob stood alone to our right, and we quickly decided to cross the meadow and climb to the top of it to see if we could spot the forts.

As we clambered up the backside of it to get a better view of our surroundings, we soon realized that there was no reason to search any further. Spreading out from where we stood was a well-defined series of low rock walls working their way in both directions around the stony peak. As we carefully followed the walls around to the front of the summit, we eventually found ourselves standing in the very pit portrayed in Peterson’s photo.

We counted over a dozen pits of various sizes, some were actually quite large, and the same string of low rock walls linked all the pits together in a well-concealed network of defensible space. Remarkably, not a single wall or pit is detectable from any view of the mountain, other than while standing right there inside the actual fortress.

In his article Peterson speculates that the fort was used by Blackfeet warriors to spy on the comings and goings of the Salish and Nez Perce Indians as they traveled to and from their buffalo hunting grounds east of the divide. Judging by the clear view afforded from the top of the stony knob, it’s quite apparent that someone used it for exactly that purpose. It’s also obvious that the mountain prominence could serve as a strategic location to fire down upon one’s enemy. As an added convenience, and an absolute necessity during any prolonged siege, a refreshing spring of cold clear water bubbles out of the rocks just a short distance from the stronghold.

In 1834 Warren Angus Ferris reported that he had seen Indian fortifications as he crossed from the Bitter Root Valley to the Big Hole while returning from a trading expedition to the Flathead country. Ferris was born in New York and had been educated as a civil engineer before signing on as a clerk for the American Fur Company.

His adventures as a fur trader were first published in a series of articles in the Western Literary Messenger, and were later published as a journal entitled ‘Life in the Rocky Mountains.’ In his book Ferris relates that on May 12th the party “crossed the mountain without difficulty, and encamped at the edge of the Big Hole. We saw several forts, made by the Blackfeet since we passed here last fall.”

If these are indeed the stony relics photographed by Ernst Peterson, then we might assume that they were built while Ferris was trading with the Salish near Flathead Lake. His description of the pass as noted the year before seems to fit the geography perfectly.

On that occasion he and his men had seen smoke rising from the mountaintop, but when they arrived at the pass later in the day there was no sign of any recent activity. Ferris says that they stopped at noon for two hours “on a small prairie, on the summit of the mountain, then descended the steep north side to the Bitter Root River.”

Earlier in his journal Ferris mentioned an incident that took place in August of 1831, where four members of another trapping party reportedly fought a daylong battle with a band of Blackfeet at Gray’s Hole in present-day Idaho.

On the morning after the skirmish the besieged trappers found that their enemies had laid low for the night in “twenty-four stone pens where they had slept.” The incident seems to confirm the fact that the Blackfeet utilized stone fortifications, but we may never know for sure who really constructed the fortress that Ernst Peterson visited and photographed more than a century later.

Similar rock forts are known to exist west of Flathead Lake, which has been a Salish and Kootenai stronghold for countless generations. Another stone fortress overlooks the wide divide at Lewis and Clark Pass north of Lincoln, which was a well-known route, used by the Salish and Nez Perce Indians during their buffalo hunts. In some places along that trail the ruts are still evident where their horse-drawn travois’ scraped a lasting impression on the weathered earth.

The forts, or “battle pits” found near Flathead Lake, have been loosely linked to a mythical tribe of Indians known as the Koyokees, who may have inhabited the region surrounding Flathead Lake long before the Salish moved north from the Bitter Root Valley.

According to one old Kootenai Chief named Baptiste Mathias, “the Koyokees liked to fight a lot, and they were bad people. They fought everywhere, Tobacco Plains, along the Kootenai River, it happened everywhere…I think that these Koyokees are the ones who built these pits.”

Another Kootenai tribesman has also suggested that the Koyokees were actually Iroquois Indians who came west with the Canadian trapping and trading expeditions of the early 1800’s. One of the earliest known sightings of a stone fort in Montana occurred in 1810, when Thomas James described one used by Crow Indians on the Upper Yellowstone. Prior to that Captain William Clark, of the Lewis and Clark Expedition, reported seeing a wooden fortress in the same area in 1806, during his return trip from the Pacific Coast.

Recently, while looking through some of Ernst Peterson’s photos and correspondence, I came upon a large manila envelope marked “Manuscript-Historical Old Fort.”

Inside were two more photos of the Mysterious Fort, and a detailed 14-page report that he had written in 1967. Apparently he had a general idea of the location of the obscure fortification, and in mid July of 1948, he and a hiking partner set out with high hopes of solving the mystery. In his manuscript Peterson provides us with an interesting personal account of his initial attempt at finding the fort.

“A hot summer day slowed our climbing progress, and as we neared the divide a sudden ominous, and what appeared as a normal summer thunderstorm, was just cause for us to take refuge in a grove of fir trees. Two hours later found us in the same grove with the storm increasing its intensity and turning to snow. We were forced to find a place with water to make camp, and had to shoulder our packs again and head through what became a blizzard.”

The men wandered along the divide half-lost and half-frozen until they finally reached a Forest Service guard station, where they “holed up” for the next thirty-six hours. Occasionally they would venture out in the “six to eight inches of snow” to try and track down any trace of the fort, but would soon return to the cabin to dry out and warm up.

Peterson described his pursuit of the elusive fort as being “on the trail of something akin to the Phantom Gold Mine, a will-o-the-wisp of a myth that existed, but no one knew where.” He says that he and his partner finally gave up their quest on that first venture and “returned to the valley, the location and existence of the fort to remain a mystery.”

After making two more trips in August, Peterson and a different hiking partner finally found the fortress less than three hundred yards from where he had floundered by it in the July snowstorm. Somehow, I can’t help but wonder if he had scrambled up to the top of the rocky knob just as we had, in order to get a better view of the situation.

Scanning the skyline 60 years after Ernst Peterson’s first visit to the stone forts.