In a previous article I mentioned a man by the name of W. B. Harlan who was sent out by the county commissioners to study the possibility of building a wagon road up past Jim Hell Rock on the East Fork of the Bitterroot.

As it turns out, the story of Wilson Barber Harlan is quite interesting in itself, especially concerning his early years in the territory during the boisterous days of the Montana gold rush. The restless young Civil War veteran from Minnesota had heard rumors of a rich gold strike at Last Chance Gulch, and when he learned that a wagon train would be leaving soon for the Montana Territory, he knew he had to sign up and join the expedition. Bob Fisk, one of five brothers, led the wagon train, and it was the fourth and final of the Fisk Expeditions to Montana. Many prominent early pioneers of the territory first came to the Rockies with the Fisk Wagon Trains, which began in 1862 when James L. Fisk successfully escorted eager prospectors to the fabulous gold discoveries at Bannack.

Harlan was barely 18 years old when the procession left St. Cloud, Minnesota, on the morning of June 6, 1866. The wagon train was relatively small, with just a few families accompanying a large group of "Hundred Dollar Men" who had each paid Fisk $100 in return for safe passage to the gold fields at Helena. Most of the men were mounted on horseback or rode on heavily loaded wagons, but a few, including Harlan, made the journey entirely on foot. The train was scheduled to rendezvous with another group of emigrants, where they would combine their forces before entering the oftentimes-hostile environment found on the empty prairies of North Dakota and eastern Montana. When the two wagon trains finally joined up, it consisted of 120 wagons, 300 well-armed men, and a fair number of women and children.

Harlan kept a journal during his long overland trek, and from it we are able to experience just what it was like to be a young adventurer heading west at the end of the War Between the States. In one early entry dated June 20th the teenager related with youthful enthusiasm that he had seen his first mirage on a high tableland they were crossing. “In the morning I walked ahead of the train for a few miles, and upon looking back I beheld the train as if it were coming through the clouds. On one side there seemed to be lakes and rivers studded with islands and covered with trees. Upon the whole it was a beautiful sight.”

Just a couple of weeks later Harlan says that the travelers celebrated the Fourth of July after “shooting twenty-five buffalo, and seeing tens of thousands of them. A herd of several hundred came within a few rods of the train. The boys stood alongside the wagons and shot many of them. We had all the fresh meat we wanted and that of the first quality, while thousands of pounds lay on the prairie, food for coyotes and wolves.” For two solid weeks they were forced to make their campfires with dried buffalo chips. There wasn’t a single stitch of firewood to be found anywhere on the barren prairie. Fresh potable water was also becoming scarce, and when it was found, it was often either strong with the taste of alkali, or putrid and stagnant. Our youthful diarist says that one night they stopped beside “a pond of animalcule with a little water mixed in.” On July 11 they were fortunate enough to camp beside a fine spring of clear bubbling ice water, and by digging just two feet below the surface of the ground they discovered solid cakes of ice.

By Aug. 2 the company had finally arrived at Fort Union, a trading post on the Missouri River, near the mouth of the Yellowstone. At that time the Great Northern Fur Company was operating the fort, and their primary trade item was buffalo hides. Technically, the fort was located in the Dakota Territory, but the Montana line was situated just 500 feet to the west, and nearly all the commerce at the fort was conducted with those whose livelihood was made further up the Missouri and Yellowstone rivers.

While resting for a day at the frontier outpost, Harlan had a chance to write a letter home, a portion of which reads as follows, “Dear Mother, by the time you get this letter there will be probably an interval of nearly three months between my letters. But you must not be anxious and worry about me. I am in good health and am enjoying myself to the best of my abilities. I have not been sick a day or hour with the exception of sore feet.” Remember, the teenager had been walking along with the train for two months at this point. The letter goes on to say that “Some of the party are discouraged, homesick and consequently, in the worst of humors, cursing the country, the Expedition, etc. I am glad it is not in my nature to get discouraged easily or to look on the dark side of every picture. We have six weeks yet to travel before we reach our destination. I can see the Missouri and Yellowstone Rivers from the door of my tent.”

By late August the slow-moving caravan had worked its way through immense herds of buffalo, and across a multitude of muddy streams, to the vicinity of Fort Benton, which was the head of navigation on the Missouri. A portion of the train separated here and headed into Benton, while the main train laidnover for a day of rest and relaxation six miles north of the fort. Our young adventurer walked to the fort during his layover and examined the adobe walls and the battery of cannons mounted in the parapet. He described the town of Benton as “quite a lively little place” and counted “half a dozen stores, a sawmill, a blacksmith shop and about thirty or forty houses.”

A couple of days later the party met their first batch of gold miners coming from the rich diggings near Helena, to seek passage back to the States from Fort Benton. Harlan relates that, “some of them gave a hard account of the mining country they have just left. Most of them, however, have considerable money. One party of six had twenty two hundred pounds of gold which they had taken out of Confederate Gulch in six weeks. This is no exaggeration, but the plain truth.” In fact, the shipment of gold Harlan is speaking of was delivered to Fort Benton under the watchful eye of a tenacious little rascal known as X. Beidler, a well-known Montana vigilante.

On the following day the party camped on Sun River, where Harlan got his first taste of the type of danger that lay waiting on the lonely trails linking the rugged gold fields of Montana. He and some other members of the expedition had been traveling on foot ahead of the wagons hunting for game. As the men neared the Sun River Crossing they saw some strangers coming towards them on foot. As the immigrants neared them the strangers all drew their pistols and skirted them to the right, keeping them ‘covered’ as they passed. The immigrants thought their actions were highly unusual, but figured that the strangers must have been carrying a large amount of gold with them and feared a holdup. The travelers continued on, looking for a suitable place to bathe, when they suddenly discovered the body of a murdered man weighted down with rocks in the river. The victim had been shot through the back of the head, and had nothing on him that could help to identify him. When Harlan told this story to Wilber F. Sanders 20 years later, Sanders believed that the victim was a man named Thompson, who had “mysteriously disappeared” around that same time, while he was returning to his home in Wisconsin with all the gold from his placer diggings.

Soon after this unsettling event, Harlan and some of the other "Hundred Dollar Men" separated from the wagon train and set out on their own to do some prospecting. The whole month of September was spent scratching around the hills north of Helena, with very little to show for it in the end. The main portion of the wagon train arrived in Helena on the 9th of September, but Wilson B. Harlan didn’t see the bustling activity of Last Chance Gulch until 20 days later, when the youthful fortune seeker finally reached his destination after nearly four months afoot, and traveling an estimated 1,035 miles.

For the next two years Wilson Harlan worked on several mining claims, dug ditches, and even hired out as a ranch hand, generally doing whatever he could to eke out a living. Frustrated by his meager returns in the gold fields, Harlan packed up and moved to Missoula in July 1868. For a number of years he drove freight wagons on the road between Missoula and Butte. Eventually he married a young schoolteacher from Corvallis and the couple settled on a ranch east of Lake Como, establishing a post office there in 1882. In 1889, Montana was granted statehood and Harlan was elected to the legislature as the representative from Missoula County. Four years later Ravalli County was carved out of the southern half of Missoula County, and Harlan served as representative of that county.

At his Como Ranch, Harlan planted the first large-scale commercial apple orchard in the state, and helped gain international fame for Montana produce when he took a large exhibit to the Chicago World’s Fair in 1893. Although McIntosh apples made up the largest portion of his orchards, he still managed to display 56 different varieties at the County Fair in Stevensville the following year. As a young man Wilson Barber Harlan had really only expected to stay in the Montana gold fields for a couple of years, but he actually lived here for 25 years, before he finally returned to visit his hometown in Minnesota.

Snowbound in the Valley of Troubles

The East Fork of the Bitter Root River passes through an open area that has been known for many years as Ross Hole. 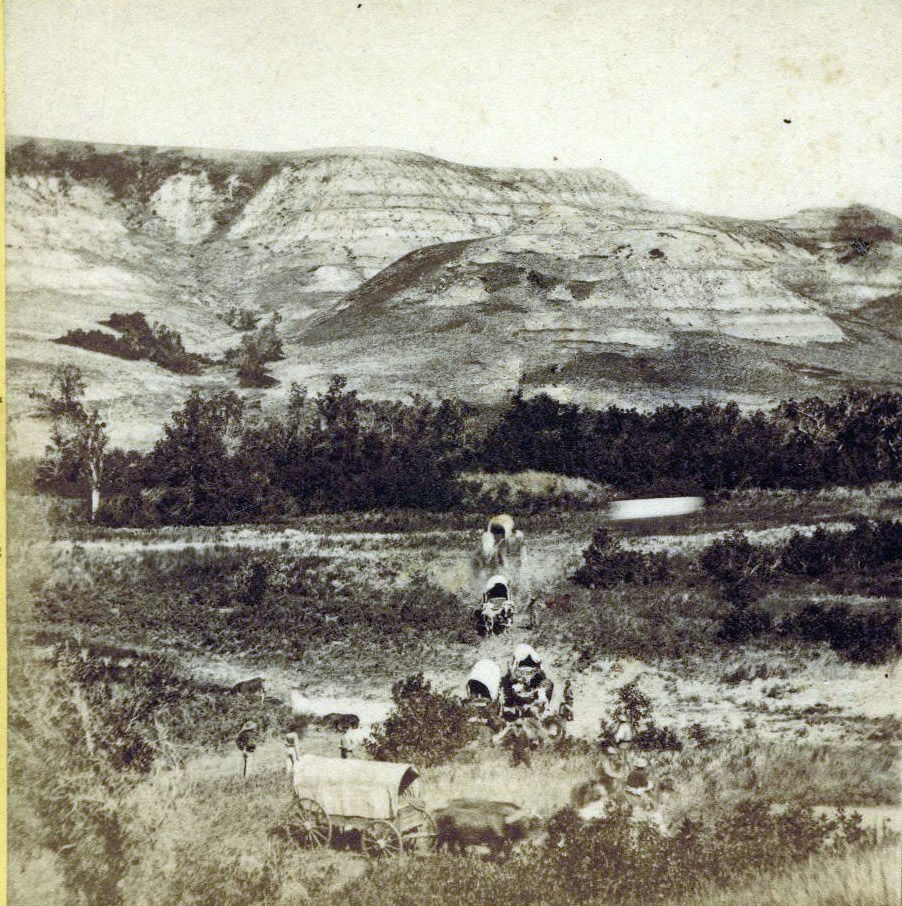 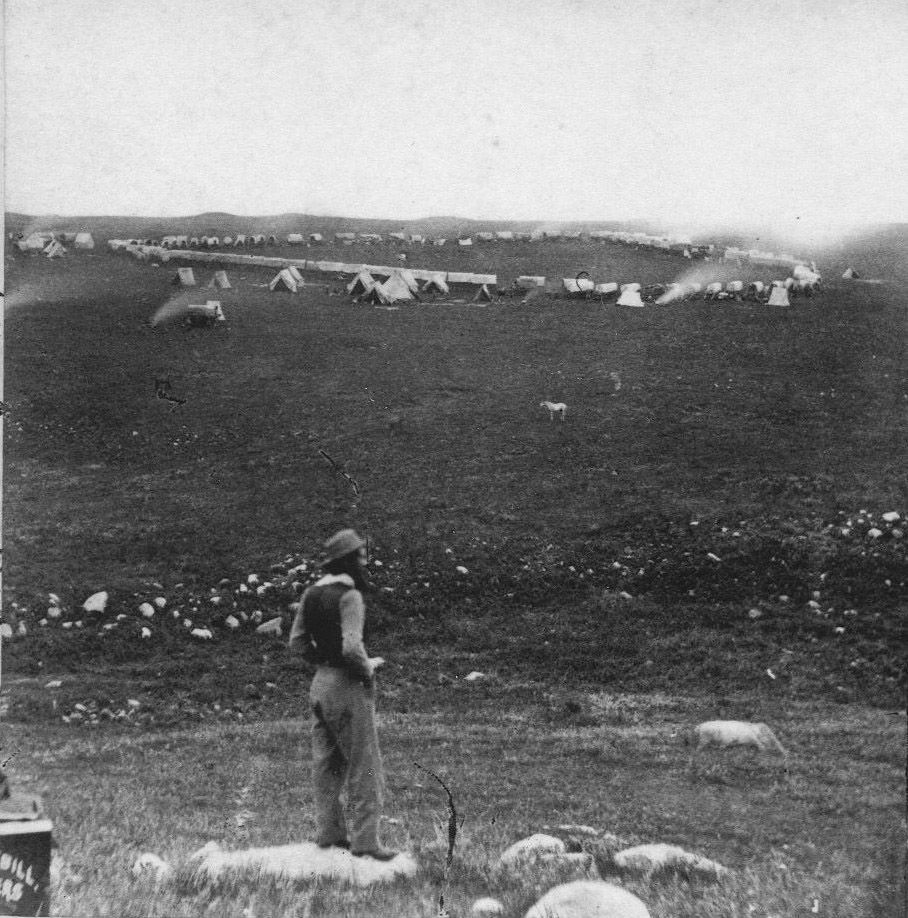 Circled wagons at a camp in the Dakota Territory. 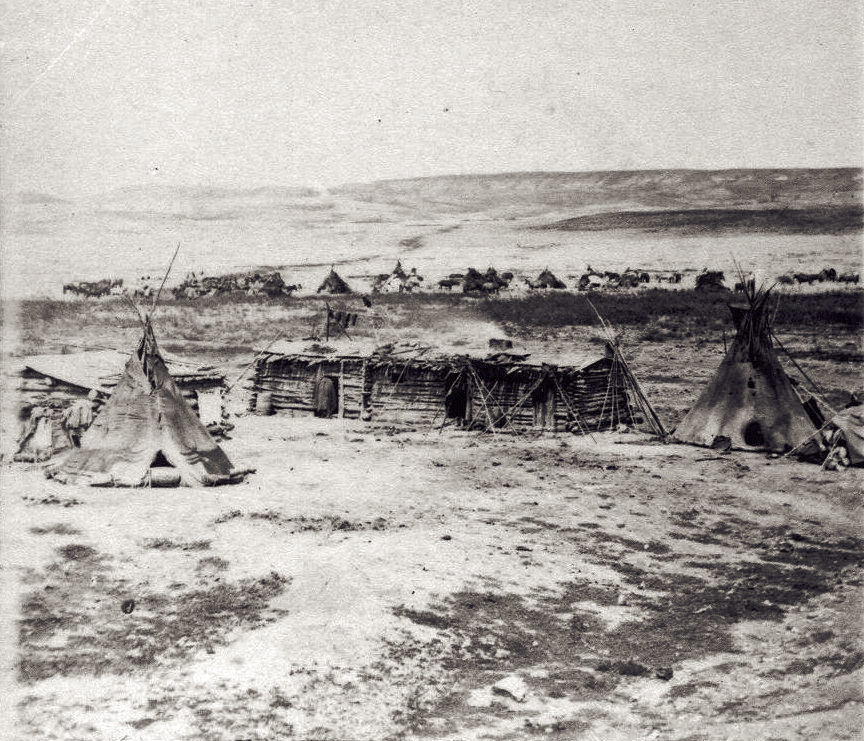 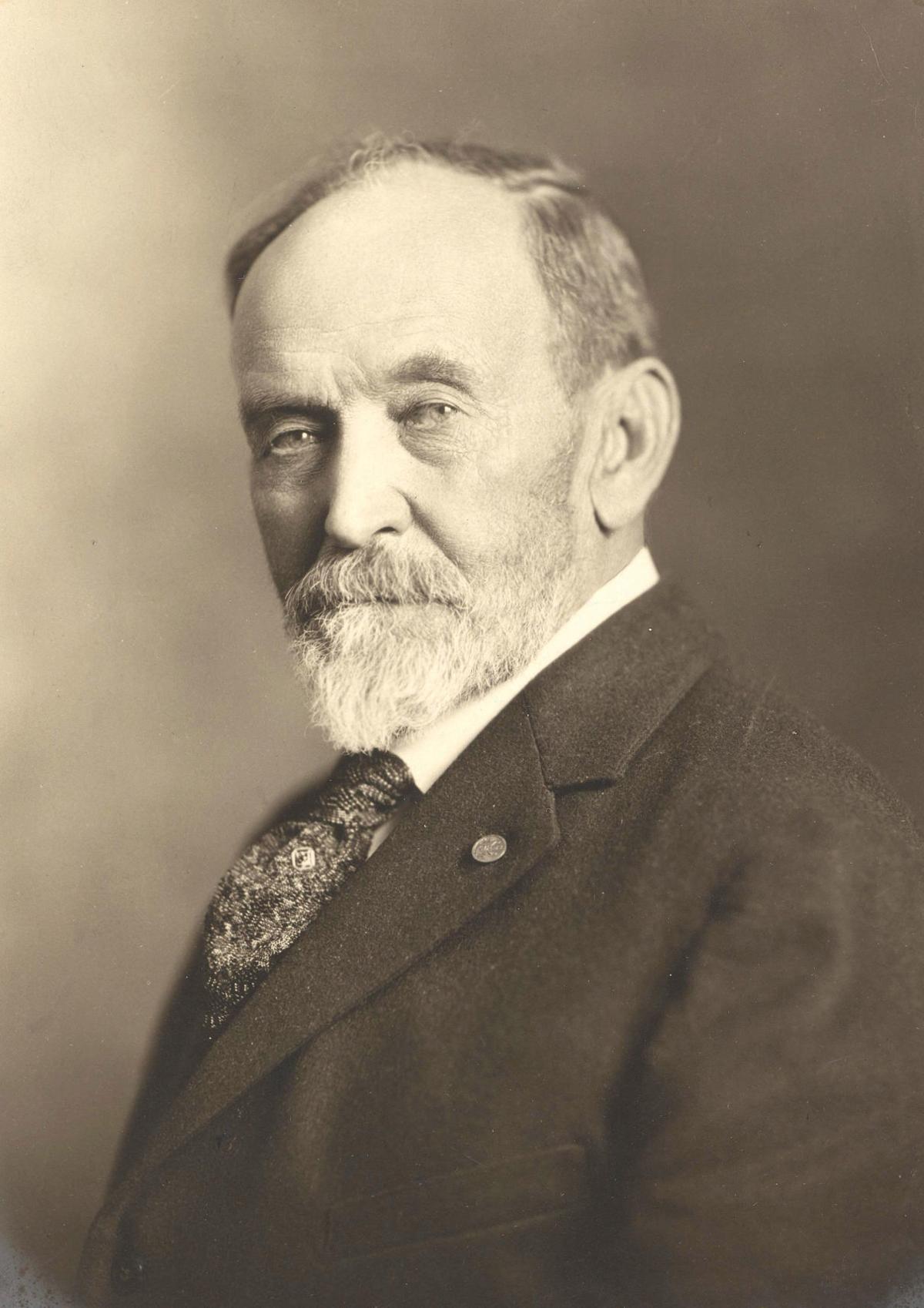