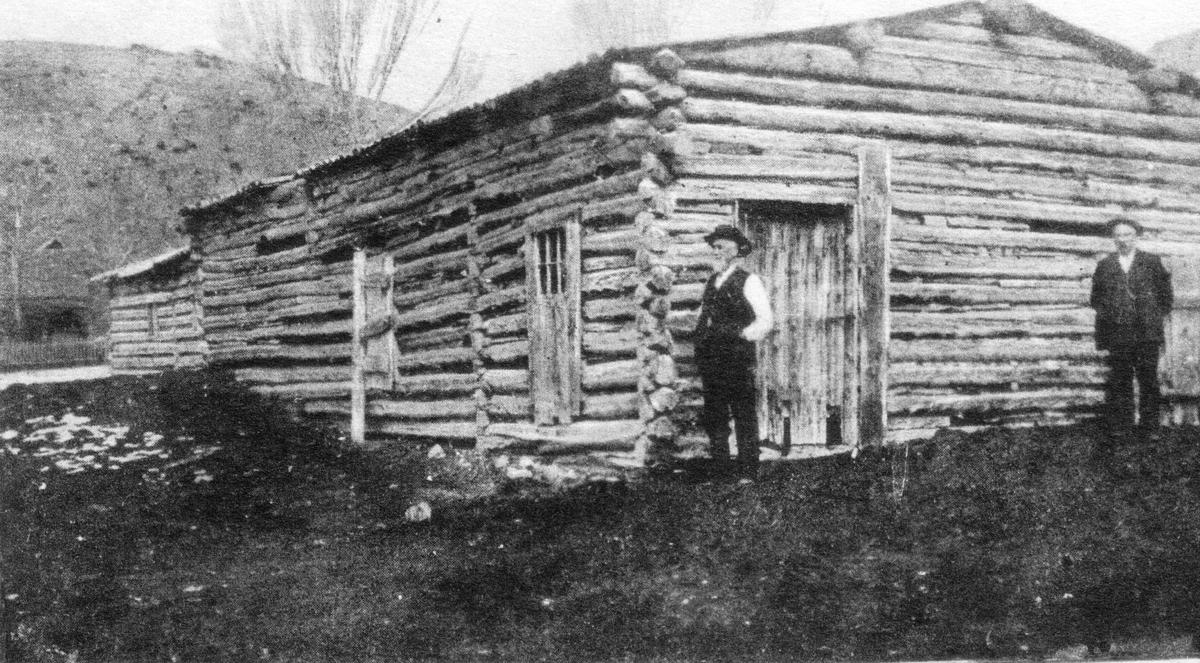 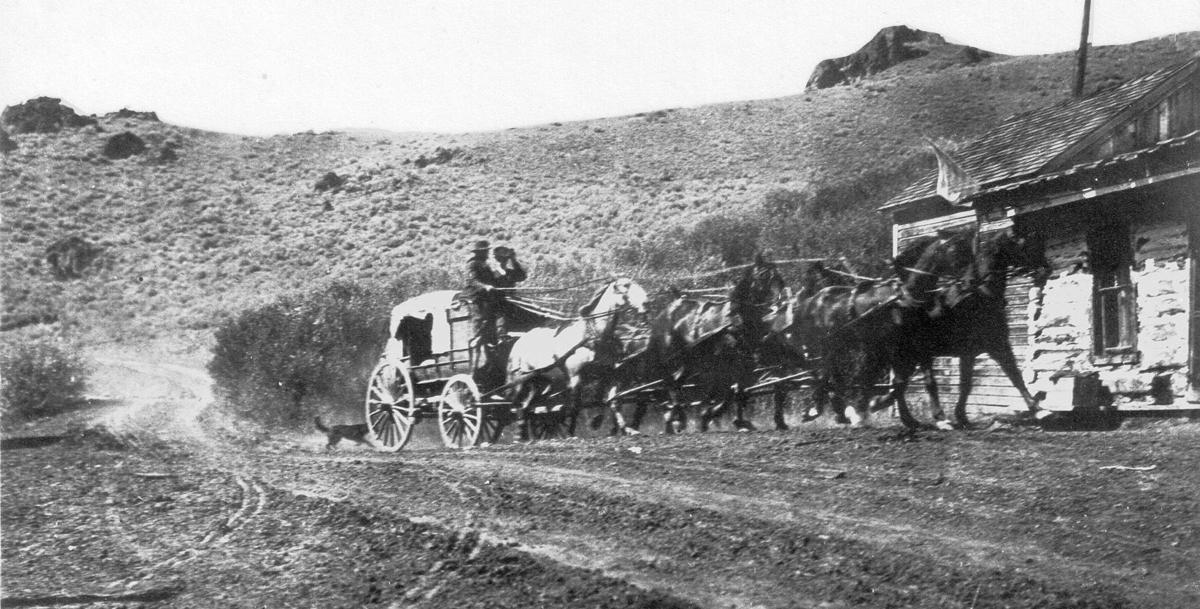 Of all the stories to come out of the lawless days of the Montana Gold Rush, perhaps none are equal to the one told by Wilber F. Sanders about an eventful night he spent among the road agents at one of their more infamous lairs. The Rattlesnake Ranch was situated on the old road between Bannack and Virginia City along the shrub-lined banks of a small stream known as Rattlesnake Creek. The ranch served as a station for a stage line belonging to A. J. Oliver & Company, and a simple log building served as a restaurant, bar, and on occasion, a place to spread out a bedroll. The two proprietors, Frank Parish and Bill Bunton, had a reputation as cattle rustlers and horse thieves, and Erastus ‘Red’ Yager, another fellow with a questionable character, was employed by the partners to serve as the station host and bartender.

Wilber F. Sanders and his family had come west with the same wagon train that brought his uncle, Sydney Edgerton, to the newly formed territory of Idaho. Both men were lawyers who originally hailed from Ohio, and Edgerton had just been chosen by President Lincoln to serve as Chief Justice of Idaho Territory, which was carved out of the Washington, Dakota and Nebraska territories. Their wagon train left Omaha on June 16 1863, arriving at Bannack three months later. The town was barely a year old at the time, and stood nearly 800 miles from the territorial capitol at Lewiston. Edgerton was put in charge of the eastern third of Idaho, which at that time included all of western Montana. By the time Edgerton and Sanders arrived at Bannack, there was already a movement in place to have another territory formed out of the eastern half of Idaho, and both men took up the cause with eager enthusiasm.

In fact Sanders had just returned from Virginia City, where he had been collecting signatures for a petition calling on Congress to form the Montana Territory, when he heard of a rumor that sent him back the way he had come. Throughout the day a number of boldly adventurous and self-indulgent young men had been frequenting the saloons and gambling houses before leaving town in groups of two. Word had it that they were heading out to stake claims on a new silver lode that was believed to exist somewhere in the vicinity. Sanders asked Sheriff Henry Plummer if there was any truth to the rumor and Plummer flatly denied it, claiming that the men were going to gather up a herd of horses belonging to Mr. Parish, who was deathly ill at his ranch on the Rattlesnake. Accompanying Sheriff Plummer on the neighborly roundup were his two deputies, Ned Ray and Buck Stinson, along with George Ives and half a dozen others. Apparently Parish was married to a Bannock Indian woman, and according to Plummer it was feared that if he died, his wife would take the horses across the divide to the Lemhi Valley, where her people were encamped.

Sanders had his doubts and pressed the issue with Plummer until he was eventually pacified by Plummer’s offer to hold a share in his name in the event that any silver mines were found in the process. Convinced by his friends that Plummer’s partners would not allow him to take out a claim in his name, Sanders set out on the trail of the suspected silver seekers an hour before sunset on November 14, 1863. The only mount that could be found in town at the time was an uncooperative mule, which had been procured and saddled for Sanders by his friends as he went about collecting his bedroll and revolver for the prospecting tour. The reluctant mule was rather hesitant to leave town, and it took Sanders nearly half an hour to get him up the hill and out of sight of the amused citizenry of Bannack. When he finally gained the summit, the tracks of the riders grew faint and seemed to trail off and leave the road in different directions. Sanders assumed the riders were all seasoned mountaineers who knew the best shortcuts to the ranch. Rattlesnake Station was located about fifteen miles northeast of Bannack, and somewhere near the halfway mark the obstinate mule refused to go any further. Sanders had to dismount and drive the mule on the rest of the way, just as the last faint light of day was fading and a cold wind-driven blizzard blew hard across the mountain pass.

Upon arriving at the ranch, Sanders found Red Yager behind the bar and a doctor who had gotten off the stage earlier that day to tend to Parish, passed out in the corner and “stupified by intoxication.” He had expected to find the house full of excited adventurers, but Yager said that neither Plummer nor any of the others had been there that day, and he knew nothing of their whereabouts. Somewhat bewildered by the missing horsemen, Sanders had Yager unsaddle his mule and put him in the corral with some feed, while he spread out his blankets on the floor near the fire. After returning to the cabin, Yager kindly offered to share the large straw-filled mattress on the floor with Sanders. Before long Bill Bunton came out of a back room where he had been sitting with the ailing Frank Parish, and joined them in their weary slumbers.

In recalling the particulars of that blustery November night, Sanders says they were all sleeping soundly when sometime around midnight they were “awakened by boisterous and rude raps upon the outer door. Red arose, lit a candle, took a shotgun from behind the bar and proceeded to unbar the door.” In came Jack Gallagher, who had departed Bannack after all the others, and had gotten lost in the snowstorm. Gallagher claimed to have been wandering up and down the creek for two hours in search of the ranch and requested food and drink from the barkeep. Yager served up the usual libations and went into the back room of the house, returning with a pan of cold boiled beef. After having his fill of whiskey and cold beef, Gallagher said he intended to continue his journey, and demanded a fresh horse to replace his worn out mount.

Sanders, who was still laying on the straw mattress with Bunton, knew that Gallagher had been with the men celebrating at Bannack earlier in the day, and offhandedly asked him if he knew where Plummer was. Although the question seemed innocent enough, it obviously struck a nerve with Gallagher. In his written account Sanders states that Gallagher instantly “jumped to the bedside with his revolver cocked, put it within a foot of my head and with the vilest profanity said that he would shoot the top of my head off, and continued in the most angry and boisterous manner his threats and denunciations.” Quickly moving his head from under the muzzle of the gun, Sanders jumped to his feet and sprang behind the bar where Red had replaced the shotgun. As he cocked the gun and brought it up into position, Gallagher casually laid his pistol down on a nearby table. Sanders says that Gallagher then “pulled his blue soldier’s overcoat apart and told me to shoot. I replied that I had no desire to shoot, but if there was any shooting to be done, I did desire the first shot.” At this point Red Yager and Bill Bunton stepped in and told Gallagher that he was in the wrong, and that he owed Sanders an apology. Eventually Gallagher conceded the fact, and with profuse apologies invited Sanders to join him in a drink, which apparently settled the matter once and for all.

After some intense negotiations, Yager provided Gallagher with a fresh horse that actually belonged to the Stage Company, and once again peace and quiet settled in on the Rattlesnake. But just two hours later another ruckus was heard outside the door when Jack Gallagher came back with his saddle and bedroll, complaining that he couldn’t find his way in the snow. We can only imagine what Sanders must have thought as he fell back into the arms of Morpheus that night, laying next to a man that had held a pistol to his head just a couple of hours earlier. Sanders had only been in the territory for two months, and was already embroiled in an intrigue that many other less-resolute men might never have lived to talk about. The next day at five in the morning, he learned from a couple of concerned friends who had come looking for him, that Plummer and his gang had been implicated in a hold up on Horse Prairie, which is located in the exact opposite direction about twelve miles south of Bannack. Within a few months all of the notorious players in this strange episode had swaggered their way to a sudden and certain demise at the end of a rope, including Frank Parish, who actually made a total, yet short-lived, recovery after his recent illness.

Once he had gathered up sufficient funds to make the long journey east to the states, Sydney Edgerton took the signed petition to form a new territory back to Washington, and returned to Bannack in the spring with the prestigious title of governor of the Montana Territory. Wilber F. Sanders went on to become a highly respected lawyer in Virginia City and Helena, and with his unflinching desire to see justice served, he helped bring law and order to a wilderness that had suffered far too long under the bullying tactics of a well organized band of armed toughs and highwaymen. In 1865 Sanders played an instrumental part in forming the Montana Historical Society, and acted as president of that organization for 25 years. When Montana finally gained statehood in 1889, Sanders was chosen by the legislature to serve as our first senator, and considering his conduct on that memorable night at Rattlesnake Station, it appears he had just the kind of grit required to fill the position perfectly.

Since time immemorial the Bitter Root Valley has been the traditional homeland of the Salish people, and many tribal members still visit the valley annually to dig bitter roots and place sacred offerings at a highly revered local shrine.