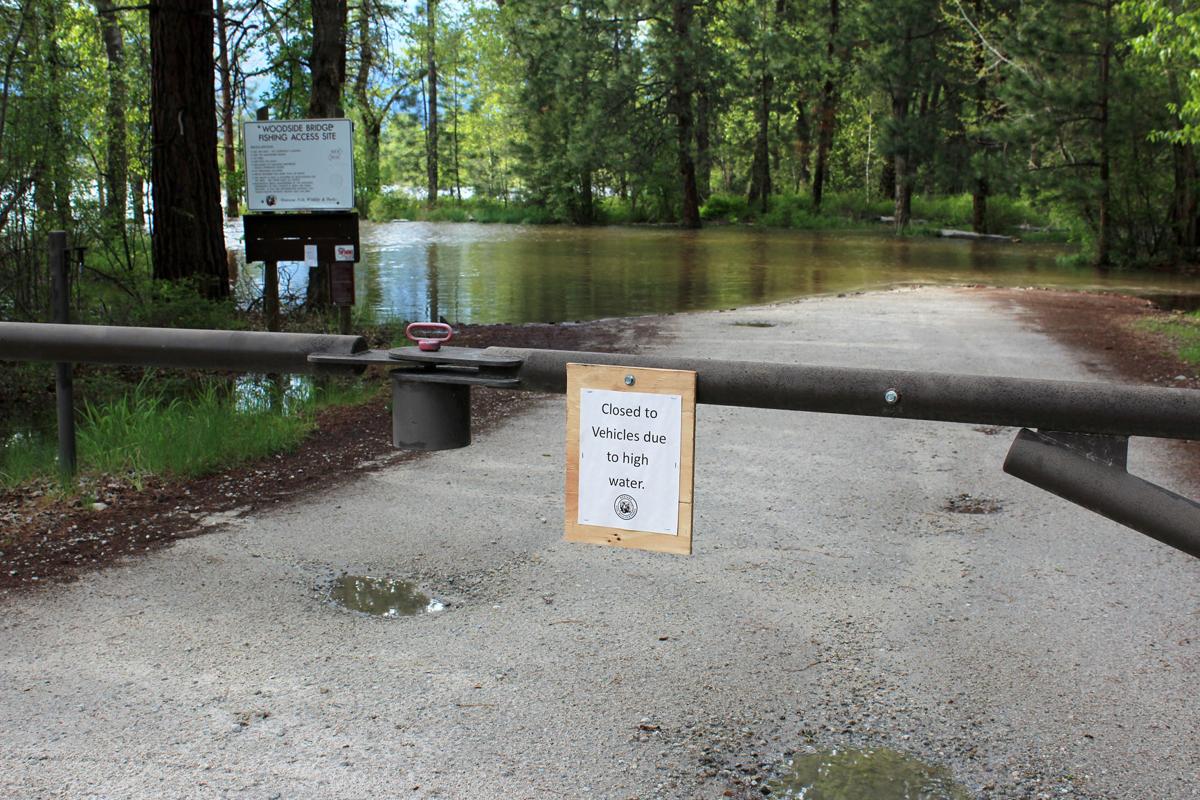 The Woodside boat launch and parking area was closed to vehicles due to high water on Wednesday, May 20, but the prediction is for the water levels to go down. 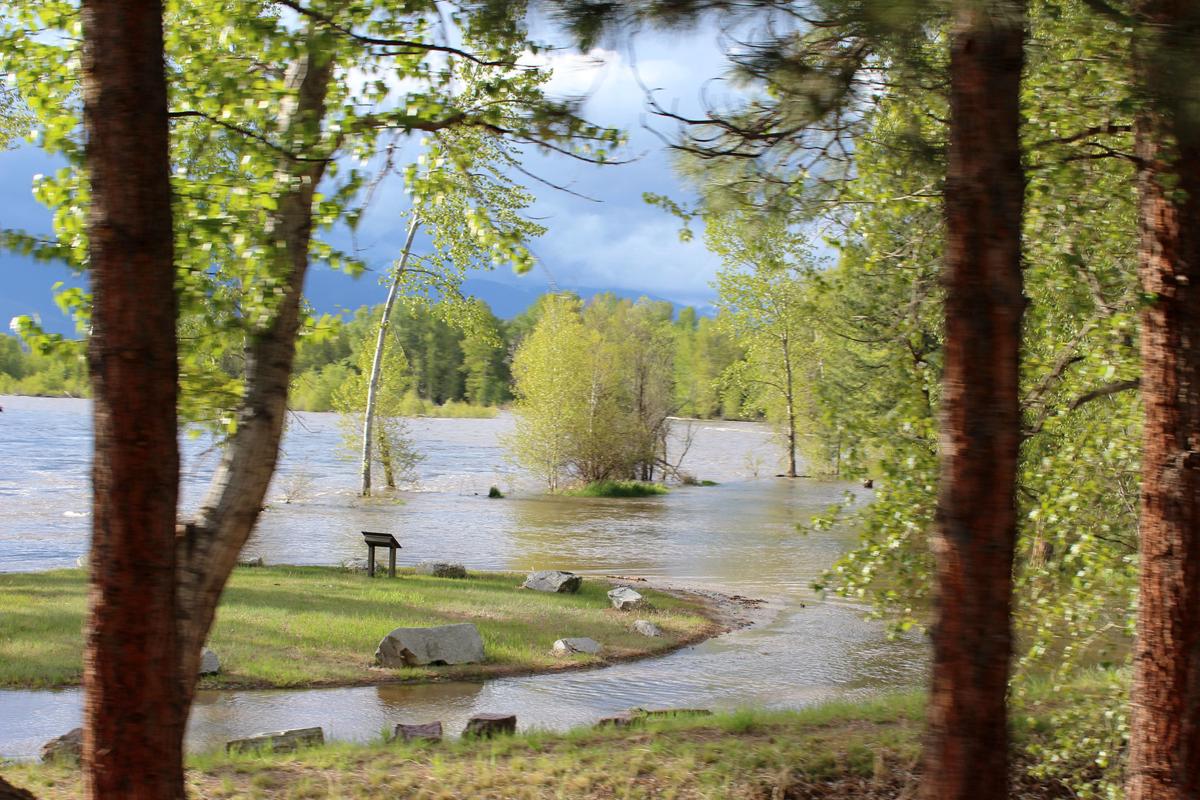 The Bitterroot River was flowing through the Woodside boat launch and parking area on Wednesday, May 20. The amount of water was not unusual for spring levels after days of heavy rain, and should recede.

The Bitterroot River is rushing, gushing and swollen from the recent rains.

It has flowed from its banks here and there but mostly has not flooded beyond the usual high-water sites each spring.

Still, a Wednesday morning notice from the Ravalli County Sheriff's Office warned, “There are reports of standing water on Eastside Highway just north of Stevensville between mile markers 1 and 2.”

Ravalli County Emergency Management Director Eric Hoover said with his office busy with “the COVID-19 problem,” he has a colleague from the state driving around checking the river and streams.

“That’s a big help to me,” he said. “She’ll let us know if there are any trouble spots.”

With the heavy rains Tuesday through midday Wednesday, there was some flooding through the Sheafman Creek area near Victor.

“We had several fire departments helping folks in that community place some sandbags to keep the water from washing out their properties, coming into their basements and things like that,” Hoover said. “From talking with Victor Chief (Scott) Hackett, they followed the flow of water from west to east down to Highway 93 where it goes across under the Mill Creek Bridge near mile marker 54.”

Hoover said that water going over the road there is typical even in a light flooding year.

“It is certainly more than what we had last year, with that cool spring, but this was driven by the large amount of precipitation, not snowmelt,” he said. “I just looked at the forecast and as of tomorrow afternoon it should start tapering off.”

“Yesterday it was full and that occurs about every 1.5 years, and when it occurs it is a hydrological event,” she said Thursday. “I was at the fishing access site at Woodside Bridge yesterday; it was closed and there was water where everyone parks all the time. The river looks so powerful even though it is so wide there.”

“The water was in the parking lot, even more so this afternoon than it was last night and I don’t know if a piece of the bank broke off,” she said. “I always stress this time of year for people not to go on the river banks because you never know if the banks are undercut or not. Your weight could make them cave off and there you’d be in all that raging water. The banks could be unstable and the river and small streams may have things floating in them.”

She said the Bitterroot River can migrate 50 or 100 feet in a year.

Wildey said she looked at the Snotel site that tells how much snow is left in the basin.

“It says we are at 84% of average,” she said. “The rain has brought off a bunch of the snowpack. In the last week we’ve had over 2 inches of rain, that’s quite a bit of rain.

She said the weather will warm up next weekend and it is going to be 76 degrees next Wednesday.

“The river will rise,” Wildey said. “It won’t come up as high, this may be the peak. A bunch more of the snowpack will come down. This typically happens around Memorial Day.”

Ryan Leach, meteorologist for the National Weather Service out of Missoula, said the recent rain caused a "rain-on-snow event" increase but that the river should be going down.

“We’ve had quite a bit of rain over the last several days but most places in the Bitterroot Valley have peaked and have gone down some,” Leach said. “A lot of the water was coming from the small streams of the Bitterroots and Sapphires.”

Before the recent rains they sent out flood warnings about the creeks and small streams that flow into the Bitterroot River.

“The East Fork of the Bitterroot did come out of its banks a little bit there,” Leach said. “None of the gauges, we have gauges near Darby and Victor, none of those gauges actually reached their flood stage. We had some flood advisories out and it looked really close but it didn’t quite make it.”

He said the only exception for the Bitterroot River is near Missoula where it flows into the Clark Fork.

“The surge of water is reaching there now and we’re expecting it to peak tonight,” Leach said on Thursday.

The weather prediction is for “things to calm down for a while.”

“We’re going to have more rain but we’re not going to be measuring it in 1 or 2 inches like we have been,” he said. “Overall over the next few days the river should decline for a while.”

He said there is still a lot of snow to melt in the mountains.

“Traditionally, the snowmelt season is the end of May and early June, so what happens in a week and a half will be important,” Leach said. “We are expecting a bit of a warm-up next week so that will cause the river to go back up, but it is rare for us to have a flood driven just by snowmelt this time of year. We would need a wet, heavy rain system to drive the Bitterroot River over the flood stage.”

Homestead Organics owners Henry Wuensche and Laura Garber had the “winter adventure of a lifetime” in Europe and returned via a slow boat from Germany.

The Bitterroot Public Library has partnered with Sapphire Lutheran Homes and the City of Hamilton to create Story Time online for its youngest patrons.

The Montana Department of Transportation (MDT) will return to Stevensville beginning Tuesday to chip seal the Stevensville Pavement Preservation Project,

The Woodside boat launch and parking area was closed to vehicles due to high water on Wednesday, May 20, but the prediction is for the water levels to go down.

The Bitterroot River was flowing through the Woodside boat launch and parking area on Wednesday, May 20. The amount of water was not unusual for spring levels after days of heavy rain, and should recede.