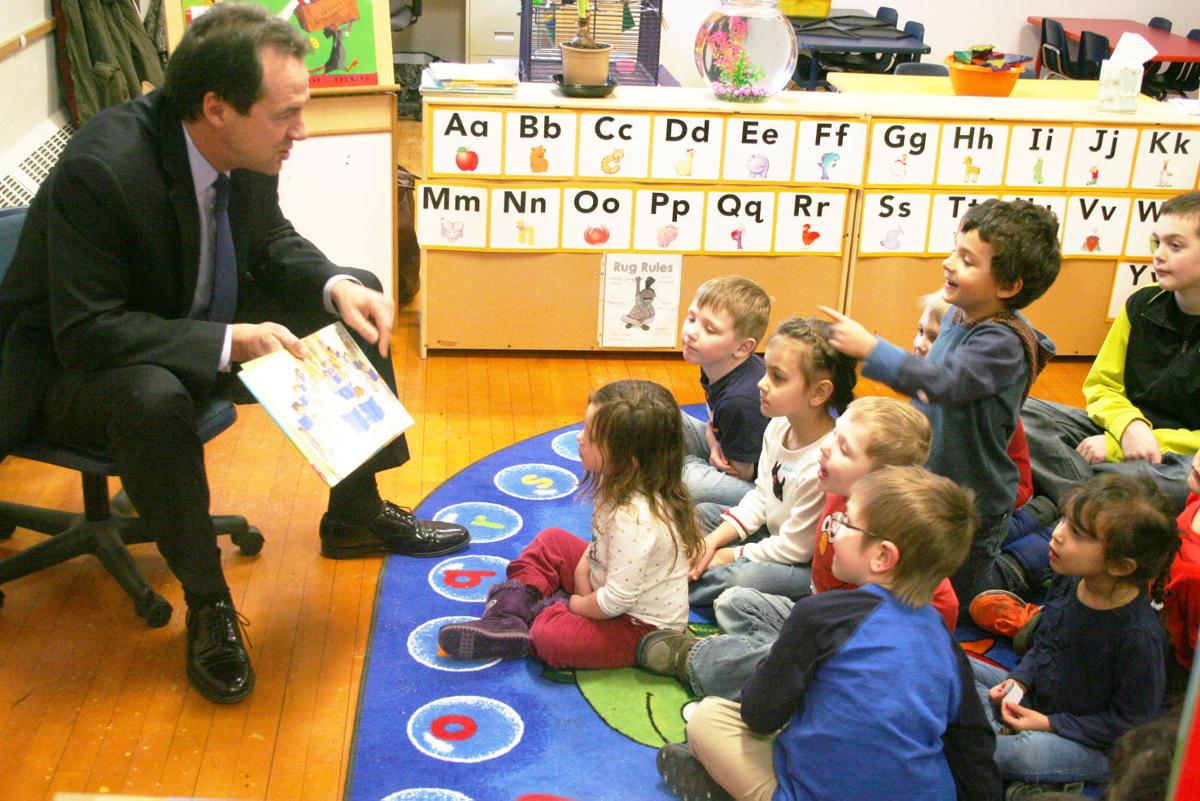 Governor Steve Bullock read to students in the Little Bronc preschool in Hamilton on Tuesday. “My job is to make sure you all get a great education,” Bullock said. 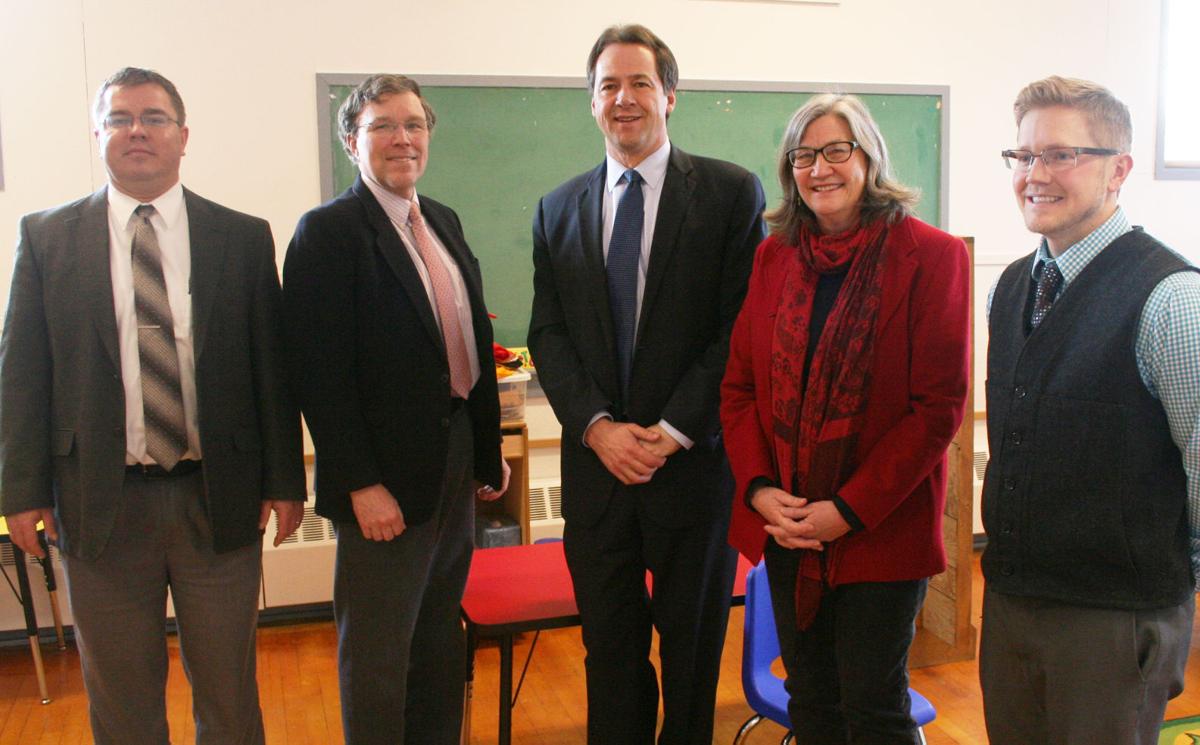 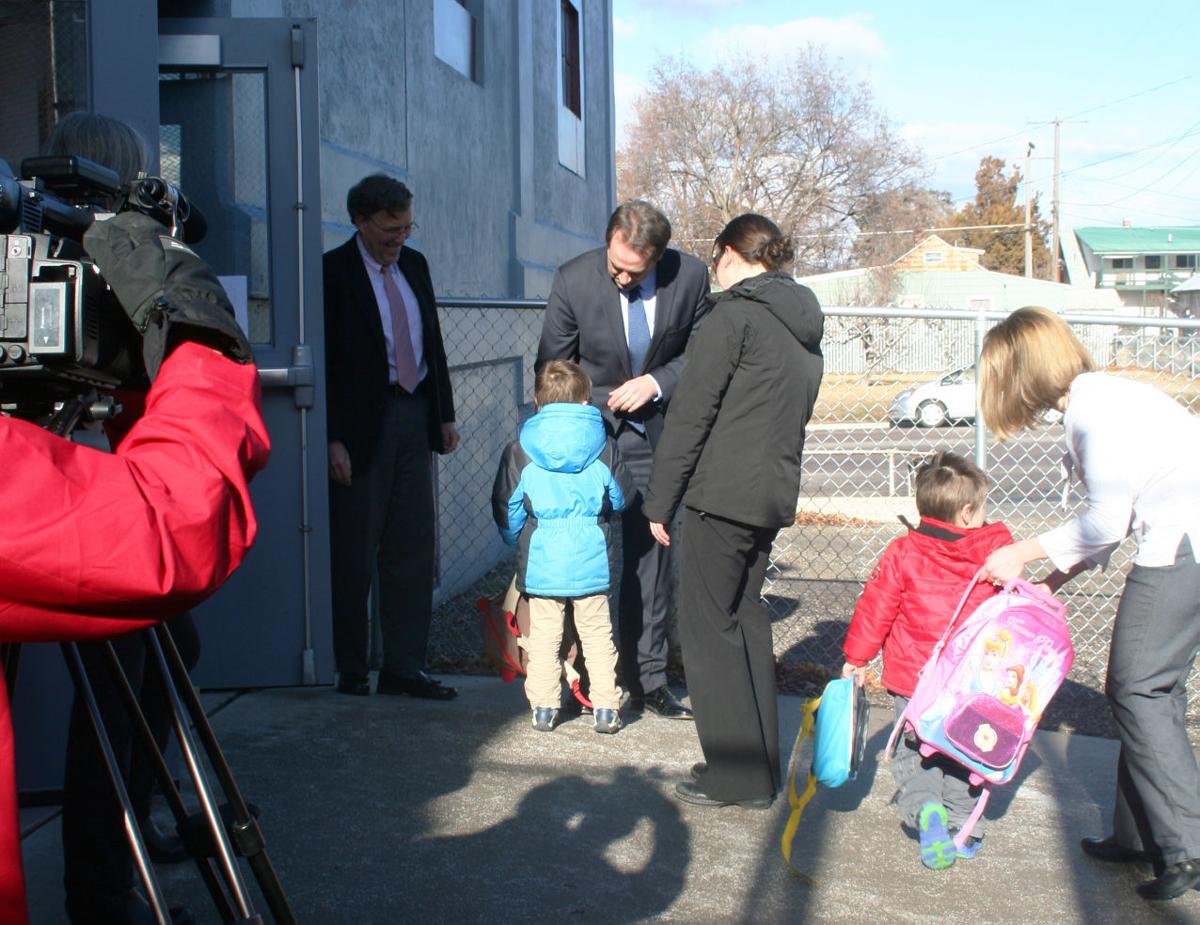 Governor Steve Bullock read to students in the Little Bronc preschool in Hamilton on Tuesday. “My job is to make sure you all get a great education,” Bullock said.

“My goal is for the entire state to have the opportunities that a lot of the students have in Hamilton,” said Bullock. “We know that a dollar invested in early childhood education has a $7 to $9 return – and to make sure every child is ready to learn and succeed throughout their life. We’ll take state dollars in a proven program and give it to the local board of trustees to figure out what will work best.”

Governor Bullock toured the Little Bronc facility and took the time to read to the children. “If You Take a Mouse to School” by Laura Numeroff is always a favorite and Bullock held their attention.

He asked if the students knew what the job of the governor is. They did not.

“My job is to make sure you all get a great education,” he said.

Bullock asked how the preschool began and about board support.

Korst explained that the initial idea of the special education preschool began two years ago, but it has developed into smaller classes led by certified teaching staff.

“The board supports this program enthusiastically,” said Bedey said. “It is based on Tom’s analysis, ideas and research that if we intervene early we can cut down the special education population later on – which is good for the students and cost effective for the district.”

Bedey said the district has a great objective but the time and number-based research isn’t yet available to prove the improvements are sustainable.

“Our program hasn’t been going on long enough to do a meaningful analysis,” said Bedey.

Bullock responded that numbers show preschool improvements have been seen even by kindergarten.

Bedey said he wants to “follow that a little further, let’s track that co-hort. Let’s not let this program get away from us.”

Bullock responded that schools in Montana, specifically, Hardin, Hamilton and Great Falls and a few others are in the “brave new world of recognizing the value of this.”

“If I were doing this, I would pilot the program in those towns and do a scholarly study of those schools,” said Bedey.

Bullock said the numbers have been proven by other states and nationwide.

“That’s the trouble with just studying,” said Gantt. “You could wait and study, but the students are getting older.”

Bullock said the advantage of being one of the last states to put an emphasis on early child development is that 42 other states have done the research and have the numbers supporting the effort.

“This [Little Bronc] program expanded beyond what it was just a couple of years ago and provided growth to kids,” said Devins. “We are providing opportunities to kids and they are continuing to grow. Where there is a need there will be continued growth. Whether we see the data or don’t we are pre-exposing kids to the information they will need to know in kindergarten. We are moving forward and this will help support kids.”

“The data from afar says that 90 percent of your brain is developed by age 5,” said Bullock. “This isn’t all about academics and making sure a 5-year-old can do Pythagorean Theorem – you have 4-year-olds sitting still. It also frees up teachers to be teaching to their whole class.”

The Early Edge Montana proposal is part of the governor’s budget. It would provide funding to allow Montana school districts to create or expand voluntary, high-quality early childhood educational programs.

Parents will be able to choose if participation is the right choice for their child.

Forty-two states have Early Childhood Education programs. Montana does not have publicly funded pre-kindergarten options for 4-year-olds at this time.

Montana.gov, the official state website, says early childhood education programs have been shown to get students ready for kindergarten – “ready to learn with appropriate social and behavioral habits that will allow teachers to focus on teaching rather than managing distractions.

“High-quality early childhood education programs have shown a significant economic impact as well. On average, for every dollar spent on these programs, communities see a $7-$9 return on investment through savings and increased economic activity.”

The proposal for voluntary, preschool, open to all 4-year-olds includes: highly-qualified teachers and staff; safe and nurturing learning environments; family engagement and wrap-around services; and developmentally appropriate curriculum that aligns with what kids will learn in kindergarten.

Bullock requested a $37 million biennial appropriation in his budget proposal in November for the Early Edge. It is a little over 1 percent of the governor’s budget.

“Economic studies have said the best investment you can make in economic development is in kids age zero to five,” said Bullock. “We know that if a child doesn’t show up ‘kindergarten ready’ they’re much less likely to be reading their grade level by third grade and four times more likely to drop out of high school.

Reporter at The Ravalli Republic

SAVE on your first 3 months! Join today