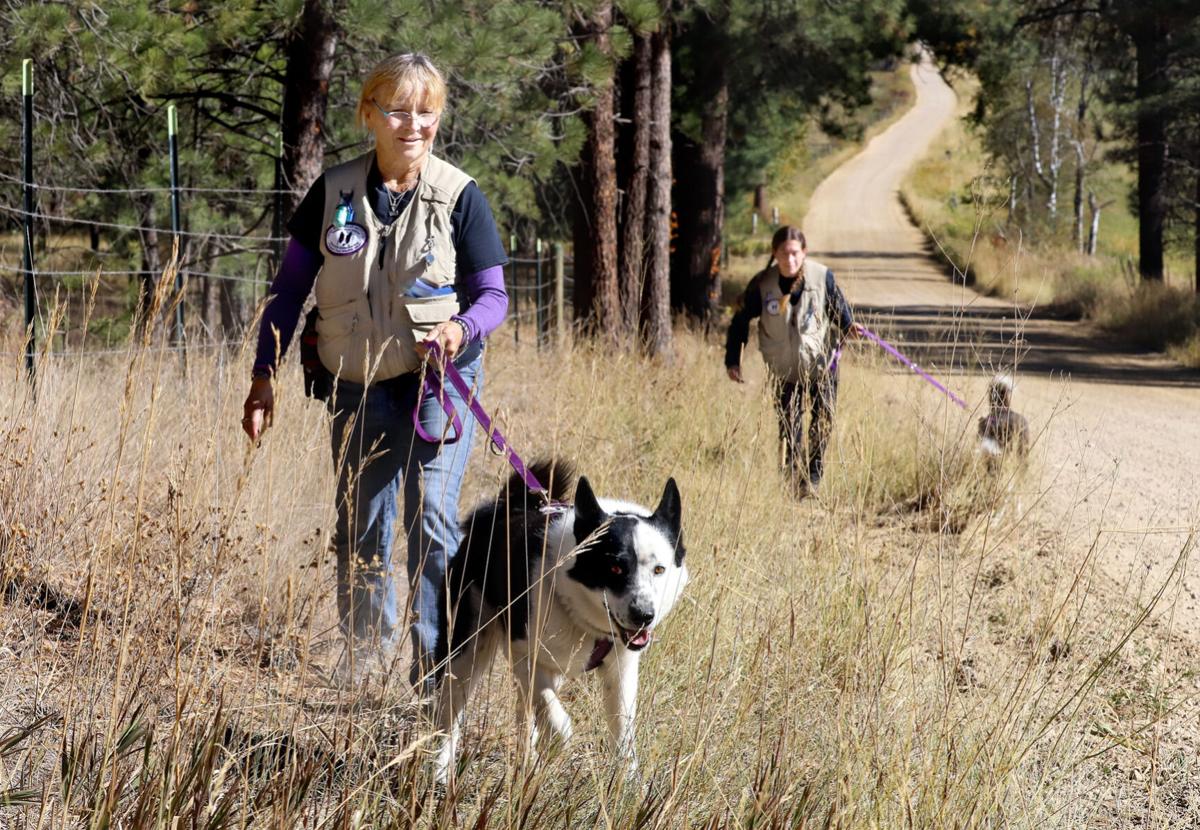 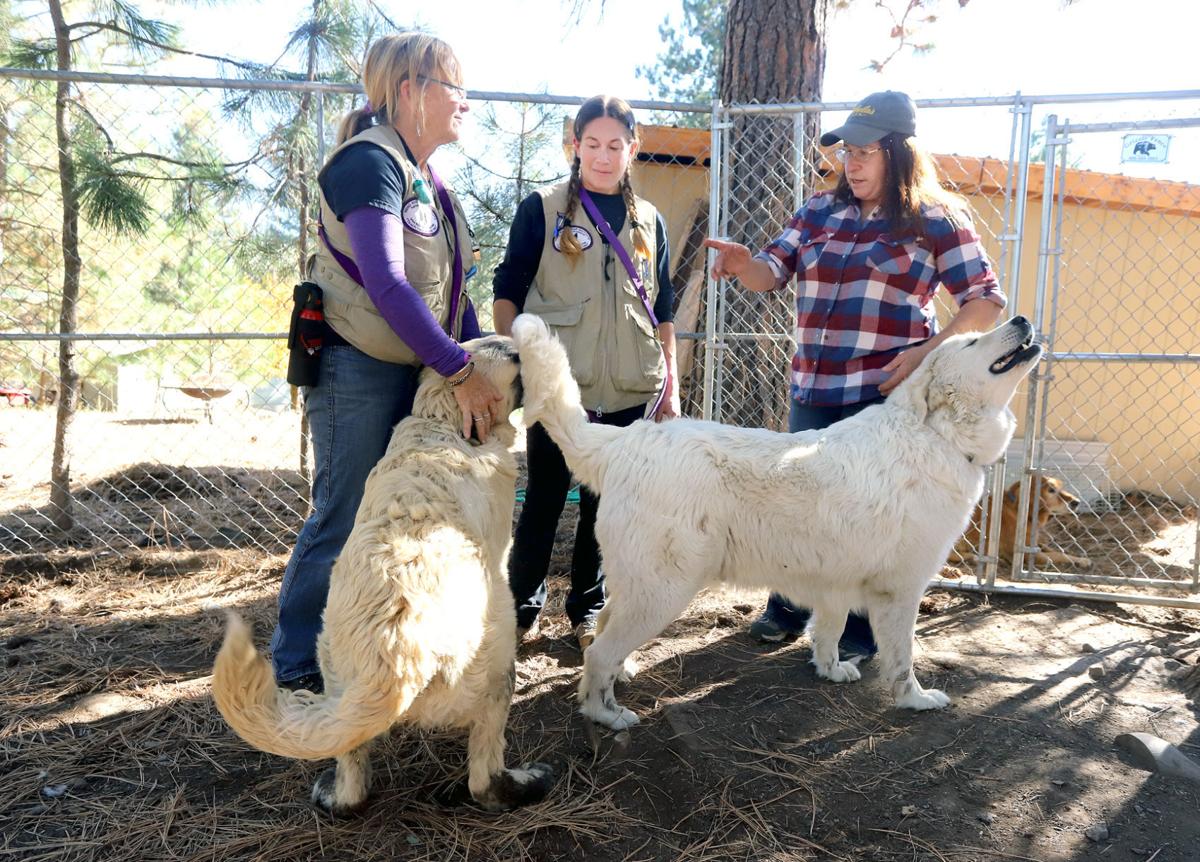 Wind River Bear Institute's Carrie Hunt and Jessica Whalen listen as Robyn West talks about the guard dogs she purchased to protect her prize sheep after a bear killed six earlier this year. 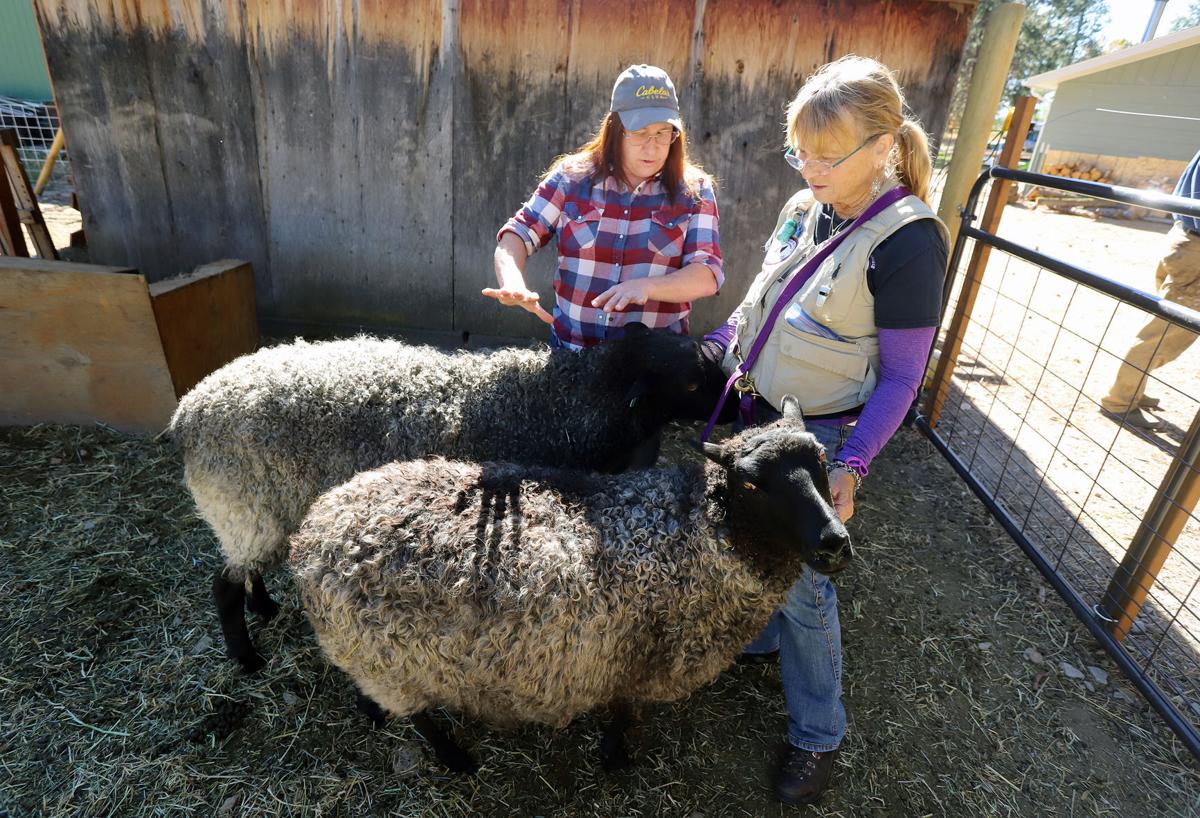 Robyn West explains the attributes of her Gotland-cross sheep to Wind River Bear Institute's founder Carrie Hunt. West lost six of her sheep to a bear earlier this year. She received help from both state and federal officials to build a bear-proof electric fence to protect the survivors. 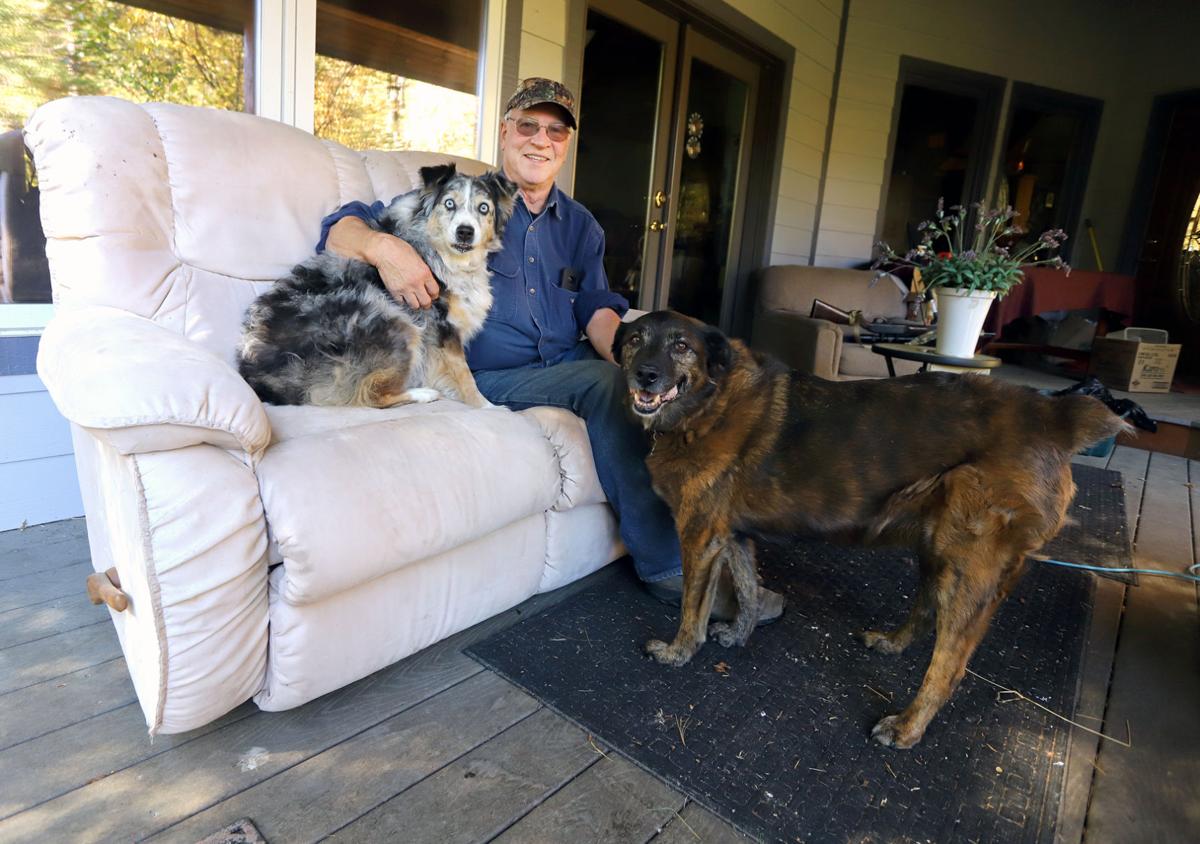 Arden Cowan sits on the couch that a large black bear pulled off his porch this spring. Cowan is working with Florence's Wind River Bear Institute to develop a grassroots' group to help neighbors in the Bass Creek drainage develop strategies to keep bears at bay. "The bear experts are interested in using our neighborhood as a practical model for showing how to prevent bear problems," Cowan wrote in a letter to his neighbors.

Over the years, there have been plenty that tipped over garbage cans, raided bird feeders, ripped open bags of animal feed and poked their noses in freezers on people’s porches.

Folks grumbled, picked up their garbage and some took steps to bear-proof their places, but there was never talk of anyone banding together to take the steps that would keep their places safe and bears out of trouble.

“That grassroots sort of effort to something that's been a big problem has been the missing link in the Bitterroot,” said longtime Montana Fish, Wildlife & Parks bear management specialist Jamie Jonkel.

That changed this spring with the arrival of a big black bear sporting a green tag in its left ear.

He made the bear’s acquaintance after dark when his dogs let him know it was lurking in the lush landscape around his home that’s bordered on both sides by channels of Bass Creek. The bear retreated when the dogs came flying out his door only to return 15 minutes later for a second dose of snarling canines.

Sometime in the middle of the night, the bear came back to rip down the birdfeeder that apparently attracted it to Cowan’s home in the first place. Three days later it returned again to knock off a double reclining couch off the porch and roll it into the yard. Cowan is certain it was just having fun on that visit.

Just upstream, the same bear pulled a locked freezer off a neighbor’s porch and then climbed up on a bench under the family’s kitchen window to investigate their recycling bin. The bear didn’t budge when the family stood behind their window and yelled while aiming their flashlights at it.

A few nights later, just down a drainage off Larry Creek Road, a bear tore through steel fence enclosure and killed six treasured Gotland-cross sheep that Robyn West had spent years raising. No one could be certain it was the same bear, but Cowan had a hunch that it was.

“We had never had any problems with predators before,” West said. “It was horrible. I didn’t sleep well for three weeks.”

After that happened, Cowan reached out to Jonkel for some help.

Turns out that was just the kind of invitation Jonkel had been hoping to get for years.

“We have a tremendous black bear issue in the Bitterroot Valley,” Jonkel said. “I’ve been beating the drum slowly and trying to find people interested in working together to address the issues we have there. That drainage could be a safe haven for bears wanting to move from the mountains to the river, but right now they have to stumble past a thousand and one traps filled with goodies.”

“No matter where they go for natural foods, they have to get through all these roadblocks filled with treats like apple orchards, bird feeders, horse feed and garbage cans,” he said. “I hate to say it, but the majority of black bears in the Bitterroot Valley are already food-conditioned. There’s just so much that they can get into.”

Jonkel has seen the power of communities working together in other places in western Montana and the difference it’s made in people and bears being able to live side by side.

“I got the call from Arden who told me all about the big bear that was causing trouble,” Jonkel said. “He was quite proud of where he lived in Bass Creek. He knew it was a really important wildlife corridor that provided connectivity between the mountains and the river. He and others were very interested in doing the right thing.”

“They were just the kind of folks that I’m trying to find,” he said.

With the open space provided by the sprawling Ruffatto Ranch, heavy cover in the creek bed and a wildlife underpass at U.S. Highway 93, the Bass Creek drainage is one of the few places where wildlife can migrate from the Bitterroot Mountains to the river.

And Jonkel knew the perfect person to help with the effort.

Carrie Hunt — the famous bear biologist known best for the Karelian bear dogs she uses to reduce bear conflicts in this country and beyond — founded the Wind River Bear Institute just north of Florence years ago. Hunt and Jessica Whalen — a wildlife biologist intern with the institute — had been working with Jonkel to develop a similar community bear awareness effort in the Lolo Hot Springs area.

“When I landed here in 2004, I wanted to help my neighbors here in the Bitterroot,” Hunt said. “It was too soon. I had to go out-of-state and out-of-the-country, but now is the time. We can focus on the Bitterroot and begin to help the people in our own backyard.”

With grizzly bears starting to make appearances both in and around the valley, the timing couldn’t be better.

A few weeks ago, a young hunter had a close encounter with what he was certain was a grizzly bear near the Bass Creek Overlook. At the end of September, there was a verified sighting of a sub-adult grizzly 12 miles west of Lolo. Last weekend, a grizzly bear was spotted in the upper reaches of Miller Creek south of Missoula. There were two grizzly sightings in the Big Hole Valley this summer.

“We look to see more grizzlies showing up here in the valley,” Hunt said. “We want to do what we can to help people living in the Bitterroot prepare for that expansion.”

After losing her sheep to a bear, West was surprised at the resources she could tap into to help bear-proof her sheep pens.

“All of the organizations worked together, and they were fast,” she said. “We had a culvert trap here that day."

West received cost-share and labor help from FWP and the federal agency Wildlife Services to install an electric fence capable of keeping bears at bay from the pen where she keeps her sheep. She also purchased two large guard dogs.

“Everyone really pulled together to make this work,” West said.

Cowan has been reaching out to neighbors to look for ways to cut down on attractants like garbage and bird feeders. Hunt and Whalen are helping to spread the word and are ready to employ their dogs if the need arises.

In a letter dropped off to most homes in the Bear Creek corridor, Cowan wrote: “The bear experts are interested in using our neighborhood as a practical model for showing how to prevent bear problems and reconditioning problem bears.”

The agencies are offering help that includes funding for electric fences and other methods to eliminate food sources close to homes. If it works, Cowan said Bass Creek could become the model for other Bitterroot Valley communities.

“It’s a crazy beautiful opportunity,” Hunt said. “Arden knows everyone and has a good relationship with them…People don’t want folks telling them what they have to do. We want to work with them and give them ideas that will work for both them and the bears.”

“Bears don’t want to get in trouble,” Hunt said. “They just need to know what the rules are. If we can get enough people to do the right thing, we can make a real difference here.”

Jonkel hopes the effort in Bass Creek will spread across the Bitterroot.

“We’ve been able to work quite effectively in the Blackfoot, Clearwater and Ninemile areas after these little organized entities of citizens come together and work collectively,” Jonkel said. “The habitat in the Bitterroot Valley is just phenomenal, but sadly it’s so packed so tight with people that it’s hard for bears to move around. It’s going to take people working together to really make a difference there.”

A serious head-on collision Wednesday night south of Stevensville that sent three people to the hospital may have been caused by a dog in one of the vehicles.

Cancer took Reggie’s eyes. For most horse owners, that would be enough to mark the end for the huge Belgian horse. But Jasmin Shinn isn’t like most.

The Ravalli Republic staff won 14 awards for writing, photography, page design and advertising, including nine first-place awards, in the annu…

A Florence man is facing felony charges after crashing his vehicle into a guardrail at high speed while allegedly driving drunk.

With temperatures set to plunge below zero this weekend, Montana Fish, Wildlife and Parks Bitterroot-based biologist Rebecca Mowry is bracing herself for a crowd at the Darby check station.

Wind River Bear Institute's Carrie Hunt and Jessica Whalen listen as Robyn West talks about the guard dogs she purchased to protect her prize sheep after a bear killed six earlier this year.

Robyn West explains the attributes of her Gotland-cross sheep to Wind River Bear Institute's founder Carrie Hunt. West lost six of her sheep to a bear earlier this year. She received help from both state and federal officials to build a bear-proof electric fence to protect the survivors.

Arden Cowan sits on the couch that a large black bear pulled off his porch this spring. Cowan is working with Florence's Wind River Bear Institute to develop a grassroots' group to help neighbors in the Bass Creek drainage develop strategies to keep bears at bay. "The bear experts are interested in using our neighborhood as a practical model for showing how to prevent bear problems," Cowan wrote in a letter to his neighbors.