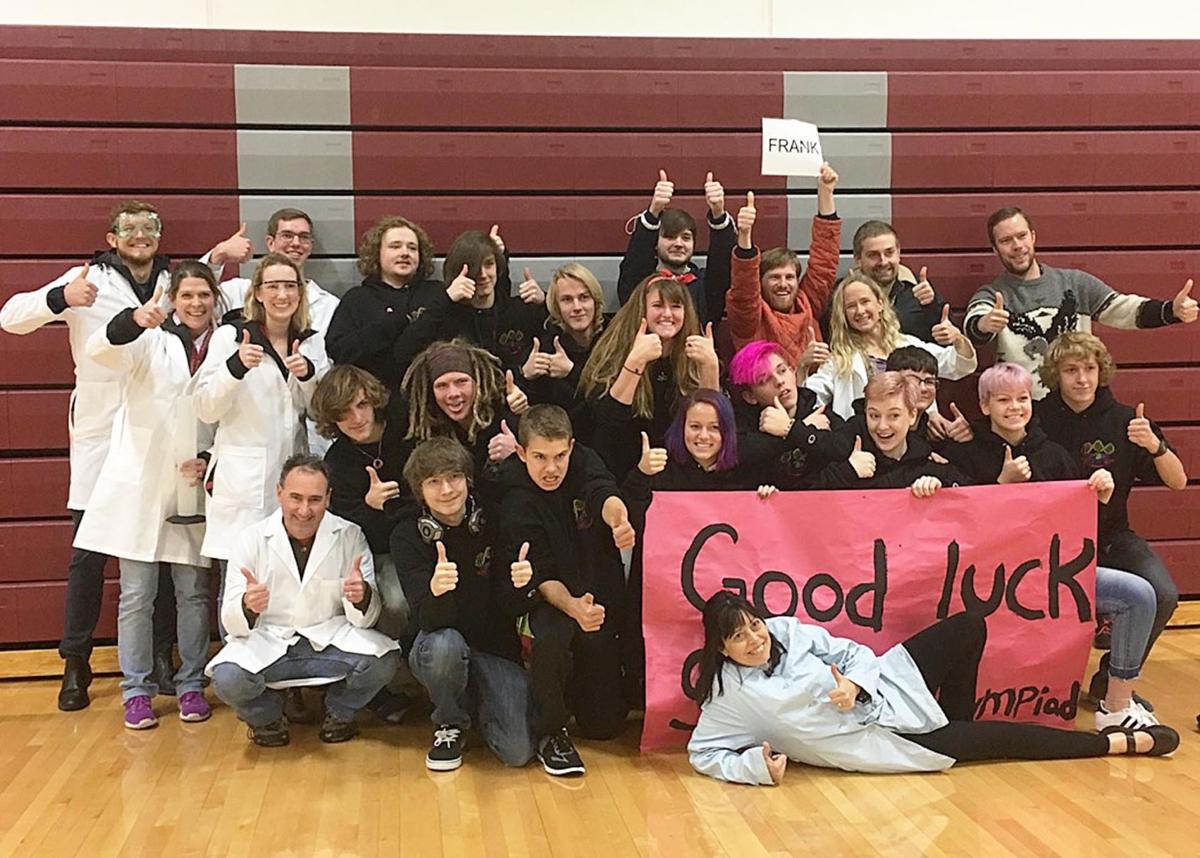 Hamilton High School’s Science Olympiad team placed third at the 33rd Annual Montana Science Olympiad state tournament, Nov. 21. A dozen supporters from Rocky Mountain Lab gave the team “good luck send-off” just as students were about to board the bus for the competition at MSU-Bozeman. 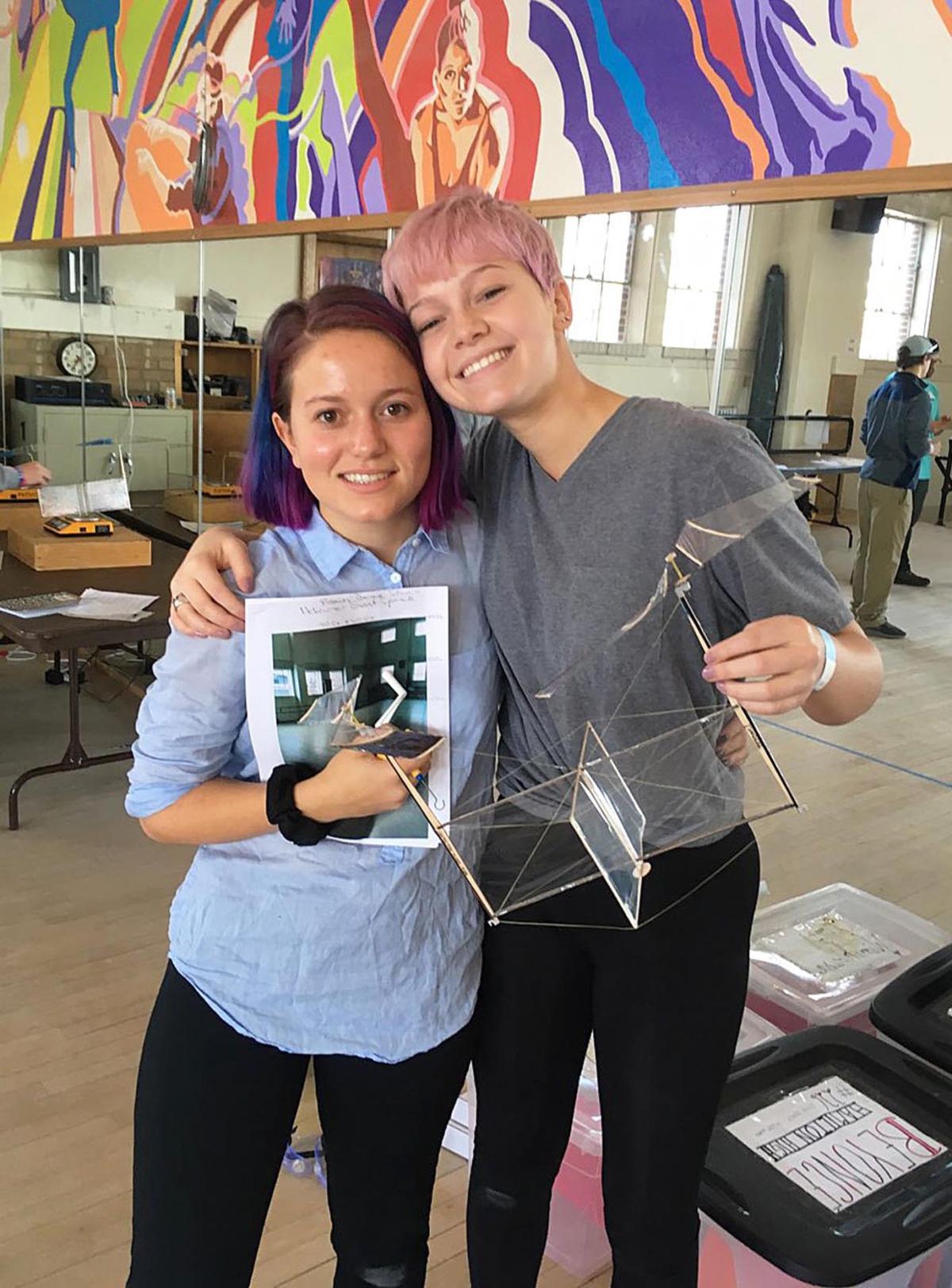 Oliva “Wilbur” Schmit (left) and Bailey “Orville” Ward have competed as partners in aeronautical engineering projects since seventh grade. As seniors, they capped off their final Science Olympiad competition with a gold medal by building a 4.3 gram chinook-style helicopter with the remarkable flight time of one minute and 25 seconds. 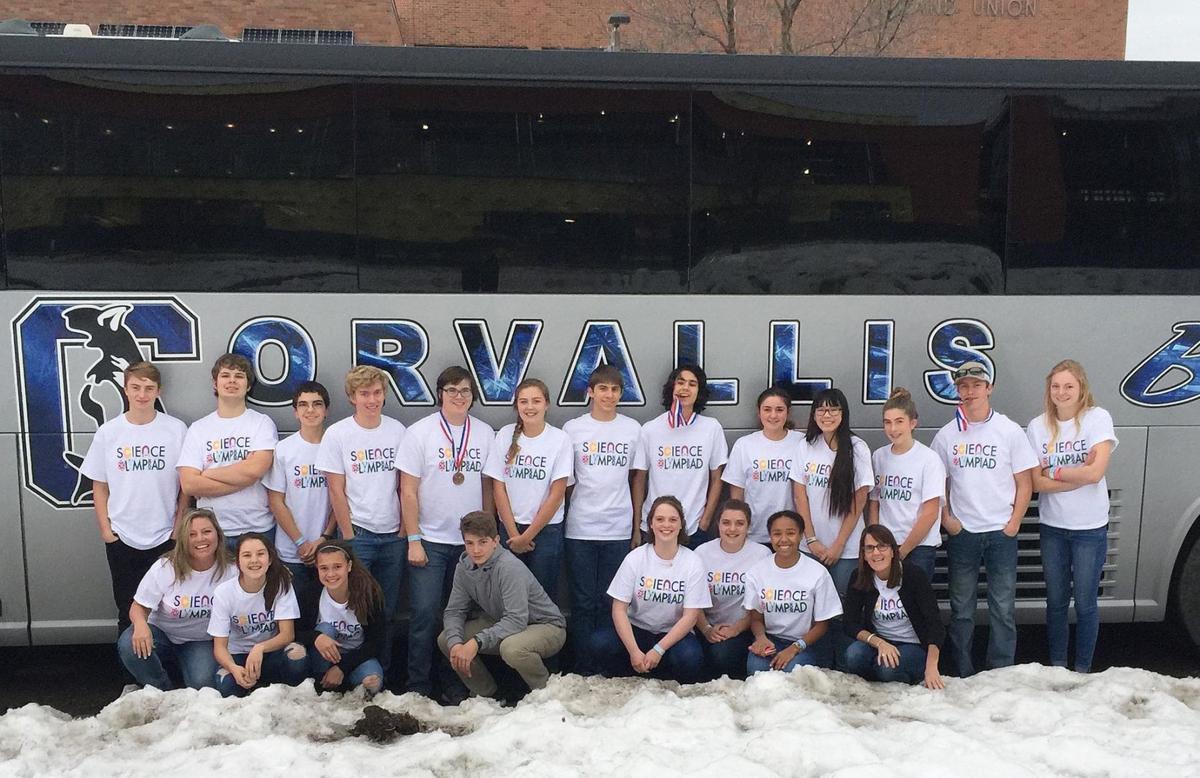 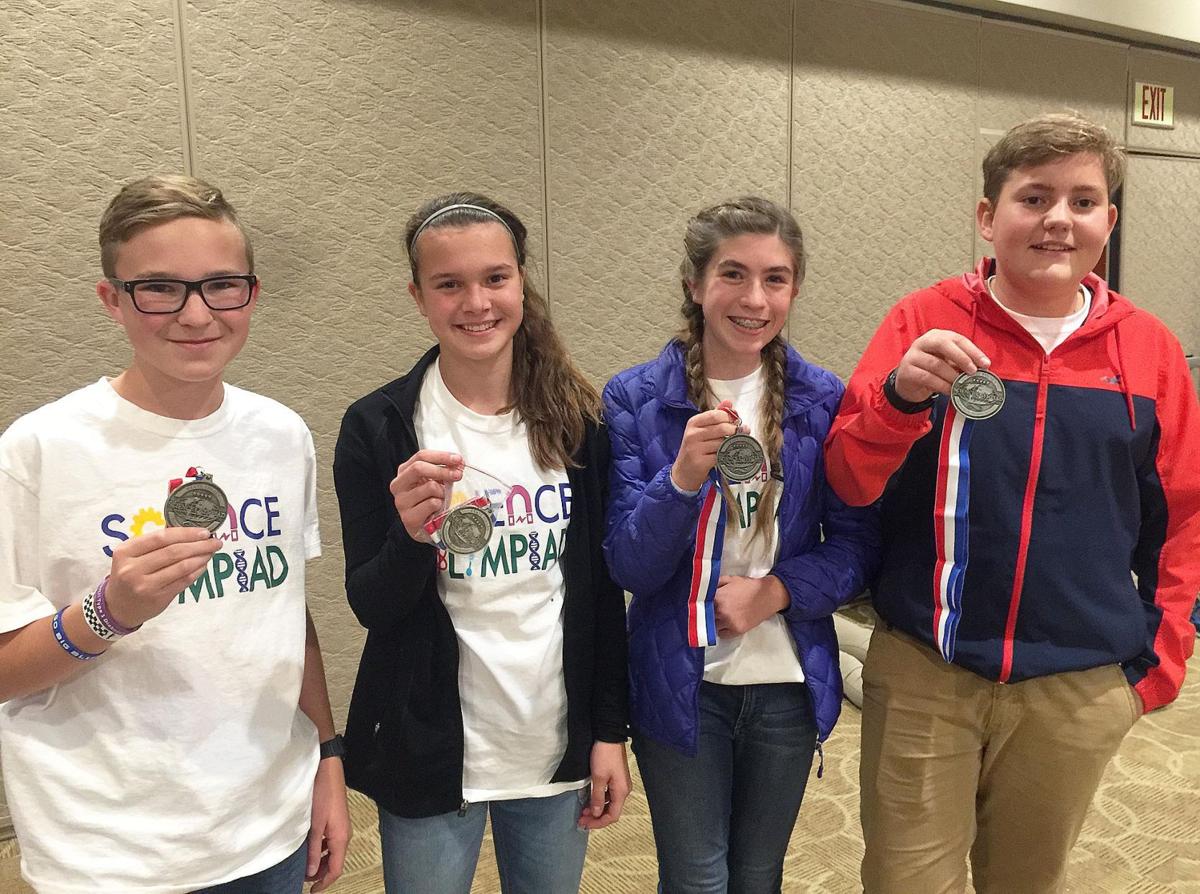 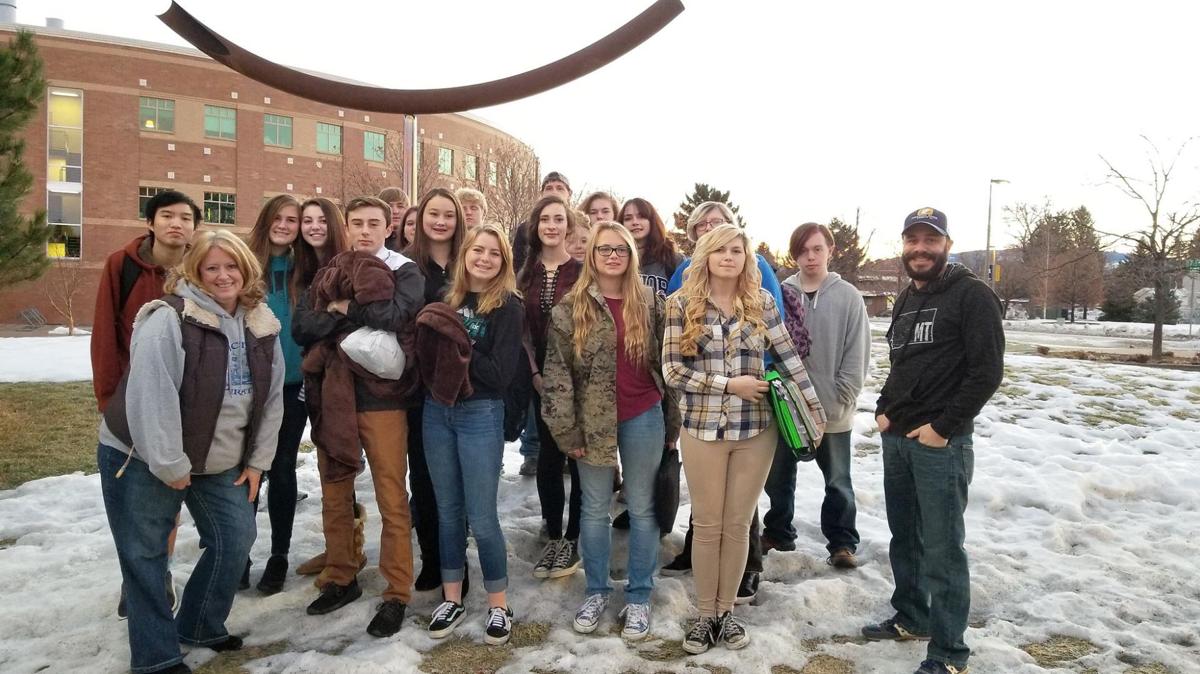 “Hamilton High School continued with its long tradition of excellence in extracurricular science competitions by marking its fourth consecutive year being recognized on the podium as a state medalist team,” said coach Tom Schmit. “Hamilton took the third-place bronze medal in the overall team event. It was an extremely close finish for the top three schools in the state. Out of a total of 658 points, Hamilton High was separated from the first-place team (Helena High) by only nine points.”

The Science Olympiad competition has a variety of events in biology, chemistry, physics, geology and engineering. In addition to the overall team competition, students also compete in individual events and put in many extra hours of study, preparation, and practice for the competition.

Coaches Schmit and Marie Antonioli said they were impressed with their team.

“It is always amazing to me that so many students step up so willingly to put in the hours of after-school practice required to be competitive in this academic event,” Antonioli said. “We had some students working eight to 10 hours a day prior to competition. Clearly, these are students that are exceptionally passionate about science.”

HHS also had individual event medalists, including seniors Oliva Schmit and Bailey Ward, who won a gold medal for engineering by building a 4.3 gram chinook-style helicopter with the remarkable flight time of one minute and 25 seconds. Sebastian Johnson and Caelen Devall won gold for herpetology (amphibians and reptiles).

“Constructing the mousetrap vehicle was really difficult and sometimes incredibly frustrating, but for some reason I actually loved it,” said Devall.

Conner Roundy and George Glidden won gold for the hovercraft event. They built a levitating device that carried up to 16 rolls of pennies down a 6-foot-long track powered only by a 9-volt battery. Roundy and Glidden also took a written test about related physics concepts.

“My competition gave me a taste of what it’s like to be an engineer - long hours of problem solving and stress,” Roundy said. “I think it was a pretty realistic experience.”

Corvallis High School’s Science Olympiad 25-member team placed fifth. The team was coached by Laura Carrasco and Tracy Dickerson with captains Ben Carrasco and Jace Barcus. The team had a strong finish with nine of the varsity events placing in the top ten. CHS also had a junior varsity team who placed three events in the top ten.

“These students are indeed the future of science,” Dickerson said. “They demonstrated amazing teamwork, and were some of the most pleasant and fun to work with kids I’ve ever had the privilege of coaching.”

“It is a lot of work for the students to prepare for their events, and it is incredible to see the progress they make and the knowledge they gain,” she said. “They truly are an amazing and likable group of kids. We spend a lot of time together, after school and on the weekends, so that really makes it enjoyable as a coach.”

“Our students did a great job representing Florence this year at the Science Olympiad state tournament, and I could not be more proud of them,” said Vanessa Haflich, coach. “Their hours of hard work and preparation paid off as several of them placed in their events.”

Victor High School placed 35th at Science Olympiad. They competed in anatomy and physiology, astronomy, ecology, forensics, herpetology, optics, rocks and minerals, and "Write it Do it." Victor science teacher Charlie Bruner was the coach.

“Our students all worked incredibly hard to prepare for their events, and they had fun and learned a lot of science along the way,” said Rich Durgin, principal. “I am extremely proud of our whole team.”

Coach Jen Powell said she is proud of her team.

“For many of them, Science Olympiad is their sport,” Powell said. “They put hours and hours into preparing for competition. Our program grows more every year and this is our second year with an addition of a strong JV team. In fact, in several events our JV tied or outscored our varsity team. This shows the depth of commitment from all of our students.”

“These students are learning so much more than science,” she said. “They are learning commitment, perseverance, time-management, organizational skills, and cooperation. To celebrate their accomplishments at the state competition is just the icing on the cake – especially when you have seen their journey to get there.”

Border to border: Corvallis stagecoach will traverse the state

Ephraim Strain of Corvallis can remember a day when he and his siblings dreamed about getting a stagecoach and driving it from one end of Montana to the other. Now he's doing it.

Hamilton turns out to celebrate graduates

With the bulk of the ballots counted in Ravalli County, it appears Rep. Theresa Manzella will easily win the closely watched race for Senate District 44.

A Hamilton man was charged Tuesday with two felony counts in connection with an alleged threat to commit a mass shooting.

A federal judge dismissed a lawsuit Tuesday that sought to close a road used to access the Bitterroot National Forest south of Darby.

Public Services Librarian Nansu Roddy retired after 35 years of service to the patrons of the Bitterroot Public Library.

Hamilton High School’s Science Olympiad team placed third at the 33rd Annual Montana Science Olympiad state tournament, Nov. 21. A dozen supporters from Rocky Mountain Lab gave the team “good luck send-off” just as students were about to board the bus for the competition at MSU-Bozeman.

Oliva “Wilbur” Schmit (left) and Bailey “Orville” Ward have competed as partners in aeronautical engineering projects since seventh grade. As seniors, they capped off their final Science Olympiad competition with a gold medal by building a 4.3 gram chinook-style helicopter with the remarkable flight time of one minute and 25 seconds.