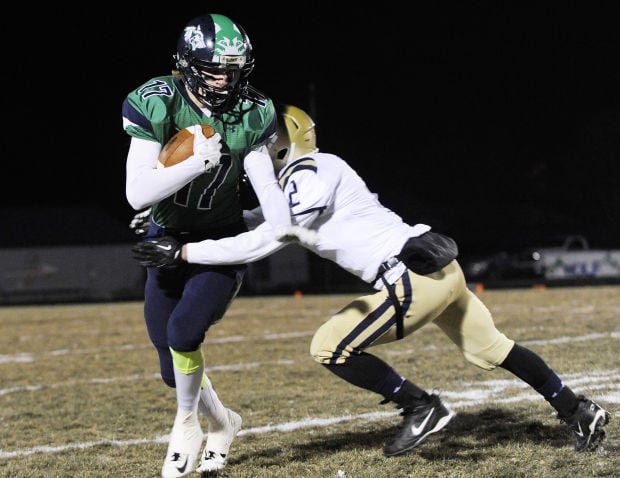 Glacier wide receiver Noah Lindsay tries to shake Big Sky's Kolton Sandau after catching the ball during their game in the State AA semifinals in Kalispell on Friday. 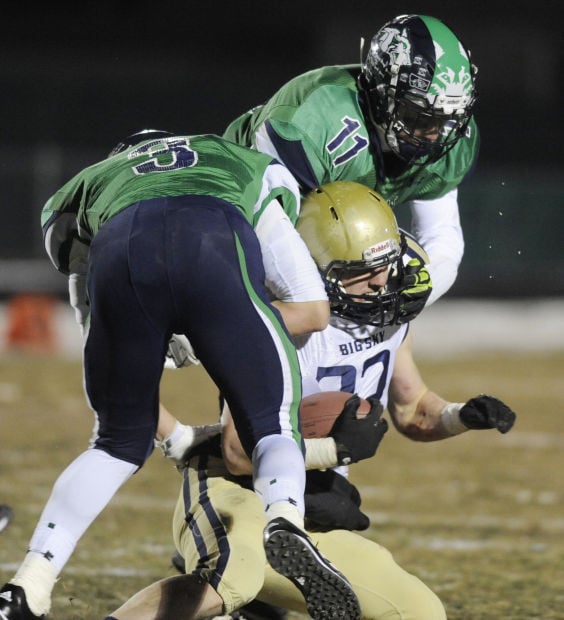 Glacier’s Tadan Gilman (3) and Tucker Rauthe (11) sandwich Big Sky’s Cory Diaz during their game in the State AA semifinals in Kalispell on Friday.

KALISPELL -- As Kalispell Glacier’s little-used punter readied his boot, a trio of Missoula Big Sky defenders burst through their blockers with the kind of push usually reserved for the Eagles’ big offensive line. Dakota Blade reached up with one paw and swatted down the kick.

Only to have it bounce off a Big Sky teammate beyond the line of scrimmage and end up back in the hands of the Wolfpack.

“That’s just the way the night went; we block a punt and they get a first down out of it,” Big Sky coach Matt Johnson said.

The Eagles’ first foray into the State AA semifinals in 10 years may sting for another decade. The top-seeded Wolfpack advanced to a second straight championship behind a 42-8 statement, only a last-minute touchdown separating Glacier from a shutout at Legends Stadium.

Cory Diaz broke off a 71-yard TD run with 48 seconds remaining to give the Big Sky faithful something positive to carry back to Missoula after a frigid performance Friday night.

“I just wish we could have done it early on,” said Diaz, a senior. “It just didn’t happen.”

Little happened for a Big Sky offense committed to the run game. Without Diaz’s long and rumbling score, the Eagles averaged just 3.0 yards per carry. And these Eagles prefer to stay grounded: the passing attack yielded just one completion.

That fourth-quarter screen from Luke Entzel to Michael Banna actually cost Big Sky yards. The Eagles finished 1 of 14 passing for minus-3 yards.

“Our athletic front, they’re big and physical, but they’re also fast,” Glacier coach Grady Bennett said. “So they’re able to shed blocks. … The athleticism of our front four is the key.”

On a night when temperatures dipped into the mid and low teens and the playing surface at Legends resembled more an ice rink at times than a football gridiron, neither side emerged for the opening kickoff looking fully defrosted.

Big Sky went three-and-out on its first two possessions and Glacier looked ready to do the same before senior Wolfpack QB Brady McChesney hit Sam McCamley for a 23-yard pickup. Three plays later, Thomas Trefney punched in the first of his three rushing TDs and the first leak in the dam came trickling down.

Big Sky, normally a sure thing in short-distance running situations, turned it over on downs at its own 40 on a fourth-and-1 stuff on the next possession. Trefney turned the reversal of fortunes into a 14-0 lead on the first play of the second quarter.

In a game that Big Sky couldn’t afford to fall behind early -- the Eags average 262 yards on the ground but less than 90 through the air -- Glacier took a 28-0 lead into halftime. It swelled to 42-0 before things would get better, the same opening deficit Big Sky endured in Missoula last month when Glacier won 49-13.

“Even in the second half, I knew if we could get a drive or two going,” Johnson started. “We would move the ball, get a couple positive notes, but we’d stall out. Once it got going, it’s just so tough to come back from.”

Diaz’s 172-yard output marks his 10th time over a century this season. He’ll end the year with 1,741 yards, the second most in the state.

The Eagles, who end the year with an 8-4 record, had just 16 total yards that didn’t come on Diaz rushes Friday.

McChesney finished 16 of 32 passing for 194 yards and one touchdown to Jacob Janke. Logan Jones caught six balls for Glacier for 78 yards and Trefney ran for 71 on 12 totes.

Next up for Glacier (12-0), which fell to Bozeman on the road in last year’s title game, will be Great Falls CMR. The Rustlers beat second-seeded Helena High 24-13 in the other semifinal Friday.

The title game will be contested in Kalispell for the first time since Flathead lost at home in 1980. No Kalispell team has been crowned champion since 1970, though Glacier didn’t open its doors until 2007.

“I’ll never forget after that championship loss (last year), you’re sitting in the locker room with a bunch of kids that are cryin’ and hurt, it’s stinging,” Bennett said. “They started saying it right there, ‘365 days.’ They came home and wrote it on the board. It’s been a countdown all year long.”

Glacier defeated CMR 49-31 at home back in the second week of the season.

Glacier wide receiver Noah Lindsay tries to shake Big Sky's Kolton Sandau after catching the ball during their game in the State AA semifinals in Kalispell on Friday.

Glacier’s Tadan Gilman (3) and Tucker Rauthe (11) sandwich Big Sky’s Cory Diaz during their game in the State AA semifinals in Kalispell on Friday.