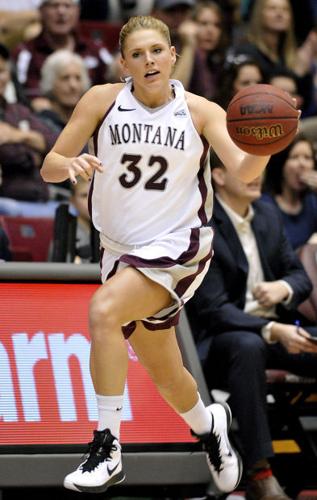 Montana senior Maggie Rickman drives the ball down the court during the team's game against Montana State earlier this month. Rickman, who leads the Lady Griz in rebounding, is considered by her teammates and coach to be a versatile athlete with strong leadership qualities. 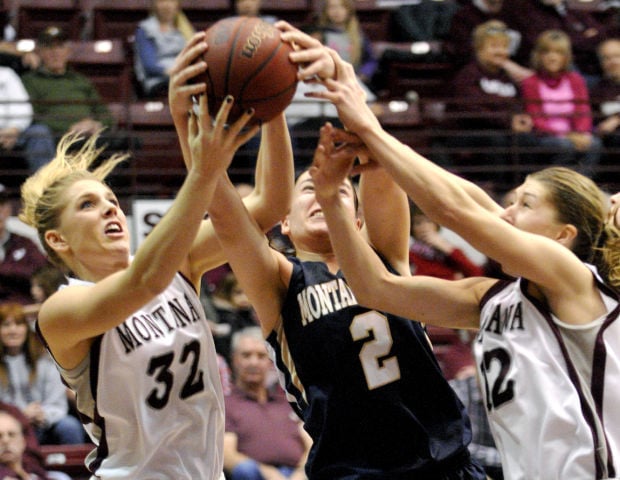 Montana's Maggie Rickman, left, leads her team in rebounds with 6.6 per game. Rickman and the Lady Griz will battle Sacramento State with the top spot in the Big Sky Conference on the line Saturday at 2 p.m. in Missoula.

The sun may not follow Maggie Rickman everywhere she goes, but it sure seems that way.

“She’s always happy,” Hannah Doran said of her senior teammate on the Montana women’s basketball squad. “I mean, that’s kind of clichéd to say sometimes but she’s always coming to practice and just pumping everyone up and getting excited about it. And she’s always working hard.

“It’s going to be weird having her gone.”

Rickman, a two-year starter at forward, has roughly seven weeks left as a Lady Griz. She considers every day in maroon and silver to be a blessing because, quite frankly, her college athletic career could have easily gone in a different direction.

“I was ecstatic to come here,” she said, recalling her senior year of high school at Helena Capital. “I was verbally committed to Carroll, then last minute they had a coaching change and I called up (UM coach) Rob (Selvig) because I knew he had been watching us and I asked him about coming to Montana.

“Blessing in disguise, right? Everything has been a perfect fit.”

No one is more thankful to have Rickman in maroon and silver than Selvig, whose squad will play host to Sacramento State at 2 p.m. Saturday with the top spot in the Big Sky Conference on the line.

Before the season started, Selvig told the senior she needed to hit the boards hard in 2014-15 to make up for the graduation of Jordy Sullivan. She has responded by leading Montana in that department, averaging 6.6 rebounds a game.

“She’s really taken that to heart,” Selvig said. “She’s had some big rebounding games, she’s jumped up and had some big scoring games.

“She’s also a very good defensive player and she’s a good leader. She’s one of those kids who has good size. She can guard a point guard, guard a big girl. She’s having a really good year.”

Rickman has special rapport with senior teammate Carly Selvig, who is also relied upon to give the Lady Griz a presence in the paint. They get together for "scary movie night" off the floor and on the floor they've helped scare up 12 wins in 13 games for surging Montana.

“She just runs the floor so well, such an all-around great athlete,” Carly said of Maggie. “Playing with those type of players is just really fun.”

The fact Rickman is even involved in athletics is remarkable. Her parents were never really into sports when she was a child. Her two older brothers didn't play, either.

“I’m pretty much the only one,” she said. “My two older brothers, they’re complete nerds.”

You might say Rickman’s growth spurt at a young age is the reason she took up basketball. She was talked into trying the sport by the coach of a travel team when she was in fifth grade.

“Just because I was taller than everybody else,” Rickman said with a smile. “I mean, I was terrible. I just stood there (at post) and pretty much rebounded and shot. But I loved it and I loved the girls that were involved with it and so I stayed with it.”

Basketball was important for Maggie through middle school and high school. Not just from a personal growth standpoint but it also served as a nice ice-breaker. As the daughter of regional newspaper publisher Randall Rickman, who currently works for Wick Communications, she moved eight times.

“I've become more outgoing and responsible for myself,” she said way back in her freshman season.

Although she has relatively good size (6 feet) and enough muscle to tangle with big posts in the paint, Rickman runs the floor like a guard. It’s a strength she likes to utilize, especially when fast-breaking Sacramento State comes to town.

Some of her best college performances have come at the Hornets’ expense. She scored 19 points, nine coming on three triples, and dished out four assists in last year’s home win over Sac State. The 19 points were a career high until she exploded for 23 in a loss to Wake Forest earlier this season.

“Fast pace is how I like to play so I always try to play that way,” she said. “Our team likes to slow it down a lot, more structured, which is nice. But yeah, the occasional fast break is definitely worth it.

“It’s definitely like a track meet playing (Sac State) -- so much high energy on the court. It’s very exciting. It’s going to be crazy. There’s not really much structure to it, which is not our kind of ball. It’s just playing and finding out whoever is better at the game.”

A two-year Academic All-Big Sky Conference selection, Rickman has embraced her role as a senior leader this season. She sets a tone with her hard work and game production. Then there are the intangibles – she has terrific people skills as a communication studies major and she is a compassionate person who plans to serve in the Peace Corps this summer.

“She’s bright and she’s a fun kid,” coach Selvig said. “These seniors, they all take it upon them, ‘Hey, this is our year this year.'

“I didn’t know how good we’d be this year. And we’ve got a long way to go. But we’ve become a good team and a lot of it is Maggie and Carly and Kellie (Rubel) on the defensive end.”

That defense will be put to the test against a Hornets team that ranks third in the nation in scoring at 85.6 points per game.

“Saturday will be a great telltale on how we’re doing as a team,” said Rickman, “Sac State gives us the hardest test.”

It’s been a bumpy ride for Shanae Gilham this winter.

Montana senior Maggie Rickman drives the ball down the court during the team's game against Montana State earlier this month. Rickman, who leads the Lady Griz in rebounding, is considered by her teammates and coach to be a versatile athlete with strong leadership qualities.

Montana's Maggie Rickman, left, leads her team in rebounds with 6.6 per game. Rickman and the Lady Griz will battle Sacramento State with the top spot in the Big Sky Conference on the line Saturday at 2 p.m. in Missoula.