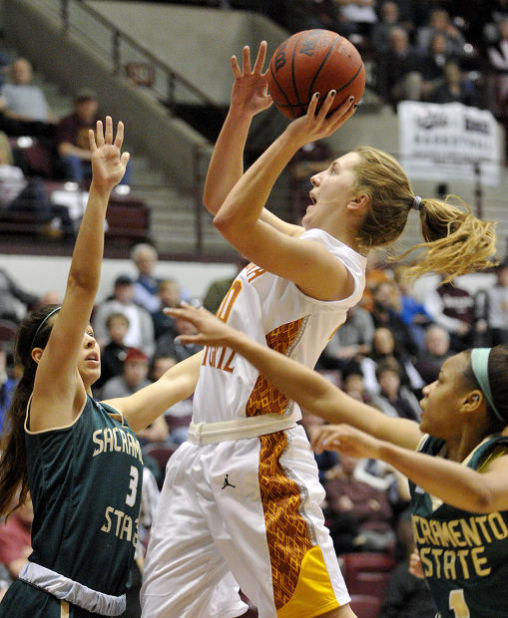 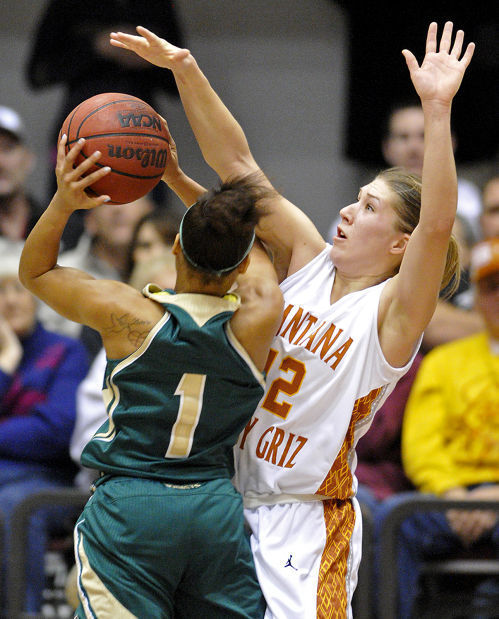 Montana's Kellie Rubel defends against Sacramento State's Fantasia Hilliard as she drives to the basket on Saturday. Rubel had 15 points in the game.

Forced to play a full 40 minutes at point guard because of Haley Vining’s nagging back injury, Rubel was money when it mattered most at Dahlberg Arena Saturday. She scored eight of her team’s final 12 points and made a key defensive stop with a minute left as Montana outlasted fast-breaking Sacramento State, 94-86, in front of 3,301 fans.

“Kellie was a trooper,” Montana coach Robin Selvig said of his senior leader, who dished out seven assists to go with her 15 points. “Forty minutes in a game that pace and being the person at the end doing good things, that’s pretty good. It’s a heck of a workout.”

The Lady Griz retained sole possession of first in the Big Sky Conference standings with a record of 8-1 in league play, 15-5 overall. Sacramento State, which was in first on Thursday, fell to 7-3, 9-12.

“We were a little worn out but we have a lot of heart and we weren’t going to give up, especially on our home court,” said Montana center Alycia Sims, who scored the go-ahead basket with 46 seconds left. “We just kept pushing ourselves -- just a lot of heart.”

Playing at just the kind of frenetic pace the Hornets prefer, Montana appeared overwhelmed early. Sacramento State caught fire from the 3-point line, hitting nine of its first 14 attempts in staking a 36-23 lead with 6:29 left in the first half.

The worm turned with 4 minutes left in the half. McCalle Feller and Shanae Gilham kickstarted a 10-0 run for the hosts. Montana went into the locker room trailing by the narrowest of margins, 47-46, despite Sac State’s 11 triples.

“It’s always crazy with Sac State,” said Sims, a Stevensville product. “They came out of the gates hot so we really had to step up our game. We knew it was going to be a crazy game so we needed to keep our composure, keep our heads in the game and we did.”

The Hornets stretched their lead to three points early in the second half before the Lady Griz seized control with a 22-4 run. Kayleigh Valley, Feller and Sims all drained 3-pointers and Rubel had four points in spearheading the surge.

Trailing 70-55 with just over 11 minutes left, Sacramento State staged a comeback of its own by getting the ball inside and taking advantage of Hallie Gennett’s nine-point burst.

The Hornets went up 86-84 with 2:05 left when Maranne Johnson picked Feller’s pocket in the backcourt and went in for a layup. Montana responded with a Rubel jumper in the lane with 1:32 remaining, knotting the score for the sixth time.

Rubel then delivered the defensive play of the game against Sac State’s cat-quick senior point guard, Fantasia Hilliard. She drove right at Rubel on her way to the basket but Rubel stood her ground and forced an awkward shot.

“She’s been doing a really good job of getting to the hole and finishing,” Rubel said of Hilliard. “It’s just really hard to stop her. I just got lucky and then got the rebound.”

Montana took advantage on the other end when Rickman passed the ball to Sims from the corner and Sims drove in for the go-ahead layup with 46 ticks left.

“I knew I just needed to focus and hit that shot right there,” said Sims, who played during crunch time after UM starting center Carly Selvig fouled out. “There was a girl there and I kind of had to avoid her but I just knew I needed to get that up high off the glass and give it a chance to go in.”

Sac State failed to answer when a missed shot by Gretchen Harrigan was rebounded by Feller. Rubel was 4-for-4 from the line in the final 25 seconds and grabbed one more defensive rebound as Montana outlasted the Hornets.

“We got down 13 and came back. Second half we get them down, then they come back and take the lead. There were a couple of big runs in that game and lots of scoring, which makes it exciting.”

Rubel credited the vocal Lady Griz faithful for helping her team pull through.

“Our crowd was awesome today, made all the difference,” she said. “It helps a lot, gets that adrenaline going.”

Valley led the Lady Griz in scoring with 17 points, followed by Feller with 16. Rickman grabbed a team-high nine rebounds a recorded a game-high four blocks.

“It’s a real big win because they don’t have a chance to get even in terms of head-to-head,” coach Selvig said. “There’s so many more games, but those teams like Sac State that we play once, if we lose to them, they’ve got a tiebreaker on us and we have no chance to get even.

“They’re a really good team. They have athleticism. They have shooters. They all shoot … We had a whole bunch of heroes.”

Montana's Kellie Rubel defends against Sacramento State's Fantasia Hilliard as she drives to the basket on Saturday. Rubel had 15 points in the game.