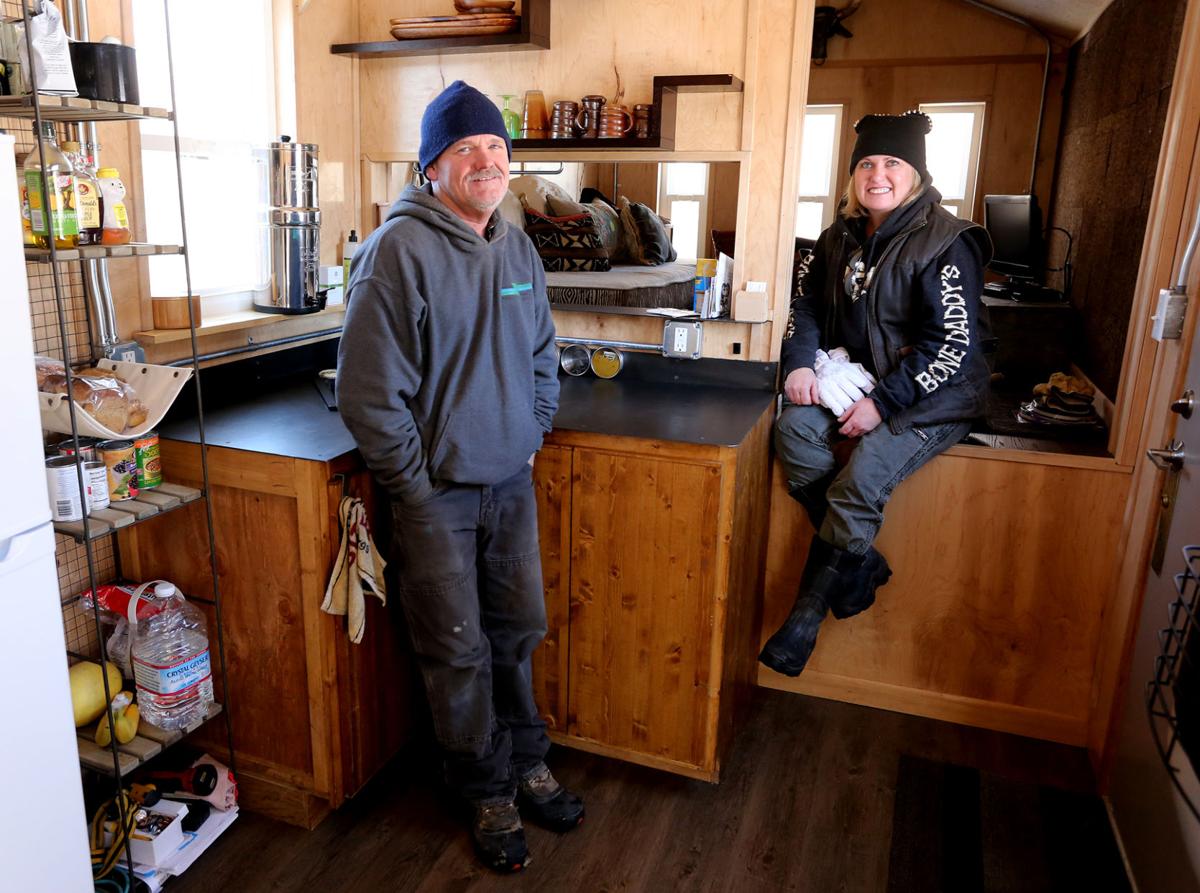 Tim and Toni Clark stand inside the tiny home they built just off Skalkaho Road near Hamilton. 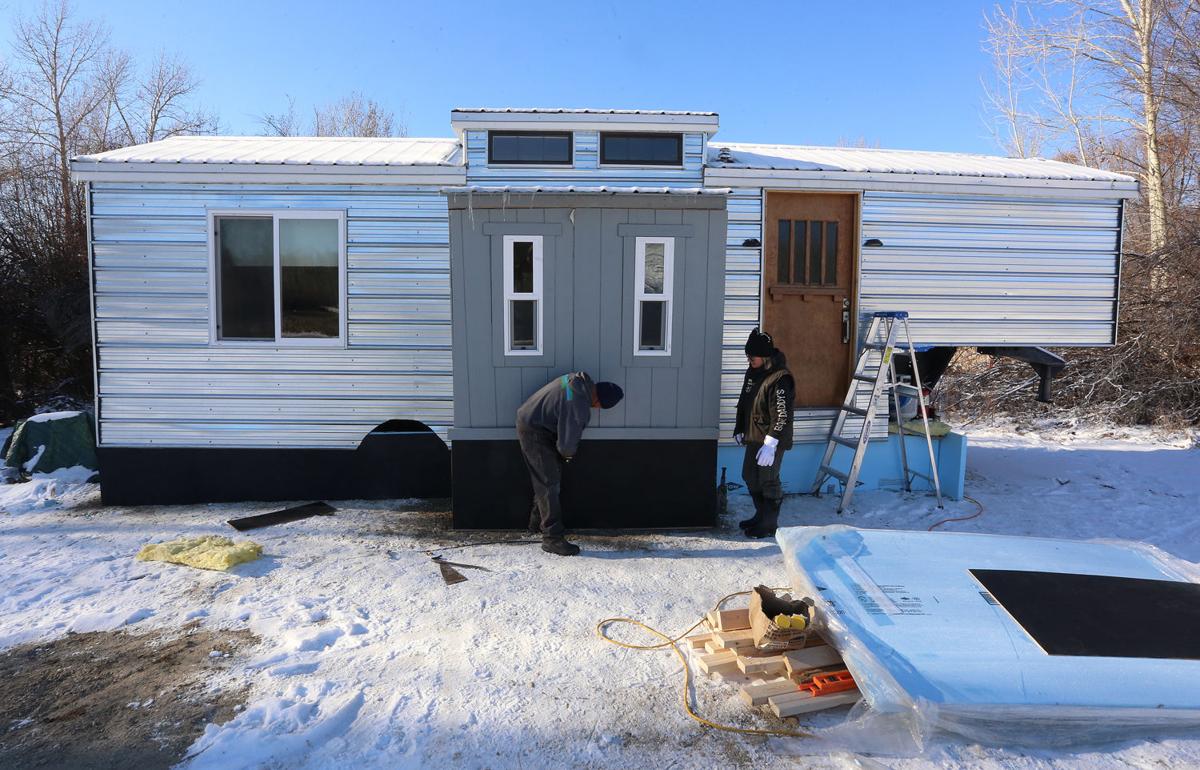 Tim and Toni Clark are putting on the finishing touches of their tiny home. 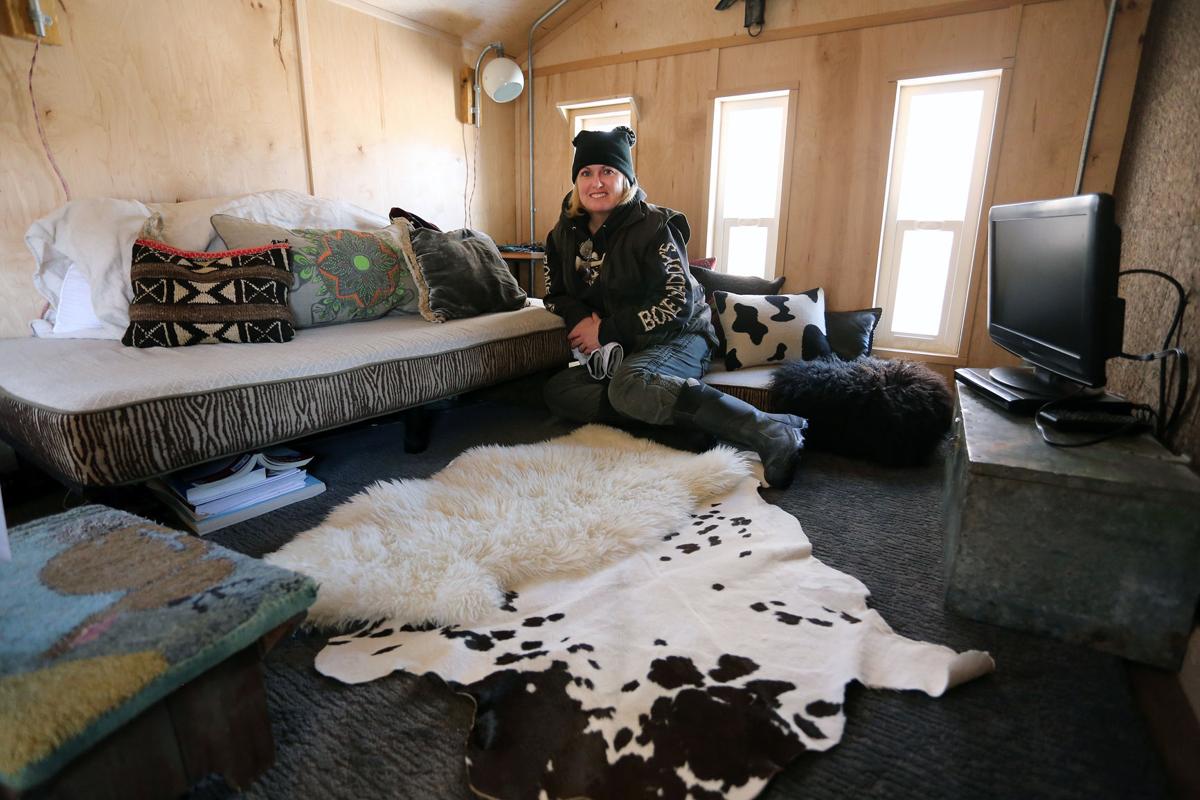 Stuff takes on a whole new meaning when you live in a tiny house.

“You are a little more careful about what you buy,” said Toni Lewis Clark. “You have to think about where it will fit.”

Clark and her husband, Tim, are in the process of putting on the finishing touches of their new 245-square-foot tiny home just off the Skalkaho Highway southeast of Hamilton.

By next spring, they hope to share their experiment in small living with others who have wondered how they would fare in a tiny house.

With a growing number of reality television shows devoted to tiny houses, the idea of giving up space in exchange for financial freedom seems to be catching on across the country.

While a typical American home is somewhere near 2,600 square feet, tiny homes range from 100 to 400. According to The Tiny Life, 68 percent of tiny home people have no mortgage; have more savings than the average American; and 65 percent have no credit card debt.

Financial freedom was one of the reasons the Clarks began to explore the tiny house movement.

“We want to be debt free in five years,” she said.

Beyond that, Clark said she knew that something needed to change after her two sons joined the U.S. Army and she often found herself alone at the couple’s much larger home.

“I couldn’t stand the screaming quiet,” she said.

The couple already knew they could make due in much tighter quarters. For eight years, they had lived in a fifth-wheeler while following Tim Clark’s construction jobs.

After they started renting their main home to tourists, the couple moved back into a smaller RV. Somewhere along the way, they learned about the growing interest in tiny houses.

“We had built so many things over the years,” Tim Clark said. “We had remodeled nine different places.”

So, one night they started to draw out the plans on the back of a napkin.

It would take several napkins to get it just right.

“We work really well together,” Toni Clark said. “He gets me.”

Tiny houses are built to be mobile. They first had to find a fifth-wheel flatbed trailer to customize. And Toni Clark went to work looking for just the right recycled materials that would fit their décor.

A unique steel sink fit perfectly up against the bathroom door. A metal horse trough worked well for the shower. A Murphy bed folds into the wall and is replaced by a kitchen table. They found a steel table that doubled as a countertop and the legs for a couch in the media room.

And they did their research when it came time to buy the compost toilet.

“Right from the beginning, I was a skeptic about all that,” Tim Clark said. “Construction without a septic tank, that didn’t seem right.”

Part of the beauty of a tiny house is the ability to move it. It can be placed on land without going through the environmental reviews that come with approving a septic system.

The couple has discovered that their composting toilet, made by a company called Nature’s Head, does such a good job that emptying it isn’t nearly as nasty as they first assumed.

So far, the cost of heating the home is another nice surprise.

“It’s costing us about $4 a week of propane to heat it,” Tim Clark said. “It’s insulated really well…It stays quite warm.”

Earlier this year, they hooked up the fifth-wheel trailer and hauled their yet unfinished tiny home to Missoula to give people an idea of what one looked like.

For a day, a friend turned the inside of the tiny house into an art gallery and people wandered through.

“There were so many people who were curious about this whole idea,” Toni Clark said. “They wanted to be able to see the inside of one for themselves.”

“That’s really the only way that people can really get a feel for it,” Tim Clark said. “They have to step inside and take a look for themselves. They need to experience it.”

After considering all that interest, the couple has decided they will put their tiny house on the vacation rental market this spring. Depending on how that goes, they might consider building a second one or even offering classes to people interested in building their own.

On Feb. 13, the couple plans to host an open house at their tiny house in conjunction with several other small business entrepreneurs in the Hamilton area.

“There are not a lot of tiny houses in Montana yet,” Toni Clark said. “We are pretty excited about ours.”

To learn more about the Clarks’ adventure into the world of tiny houses, people can go to www.uniquelyliving.com

Reporter Perry Backus can be reached at pbackus@ravallirepublic.com.

Builders see uptick in home construction in the Bitterroot

Ray Tipton knows what it’s like when the phone isn’t ringing.

Tim and Toni Clark stand inside the tiny home they built just off Skalkaho Road near Hamilton.

Tim and Toni Clark are putting on the finishing touches of their tiny home.