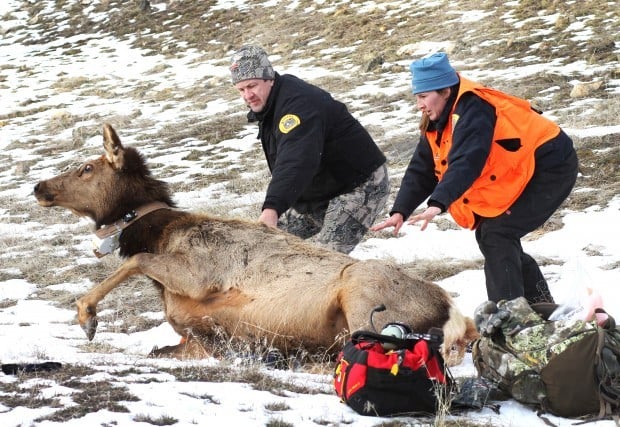 Biologists Craig Jourdonnais and Kelly Proffitt stand clear after taking the hobbles off one the elk captured over the week. Unfortunately, this cow and one other died from injuries sustained in the operation. In total, 44 elk were collared over a four-day period in the east and west forks of the Bitterroot. 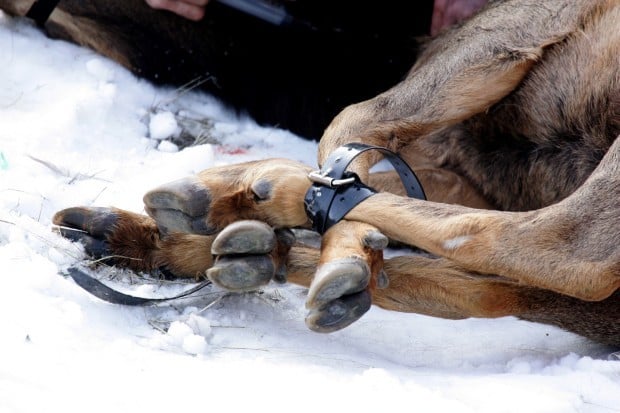 Once the elk's feet were hobbled and a blindfold placed over their eyes, the animals calmed down significantly. 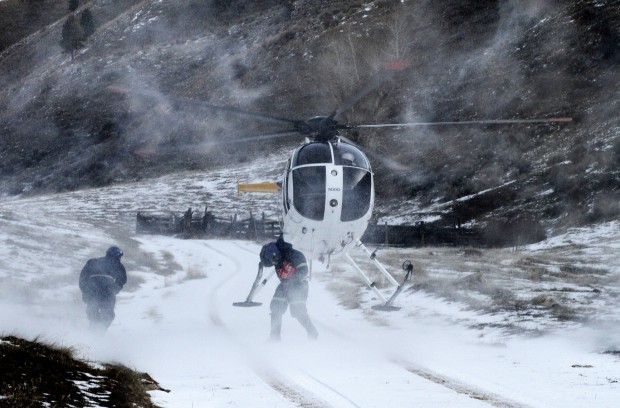 A team from New Zealand manned the helicopter and net guns used to round up and capture elk in the east and west forks of the Bitterroot last week. 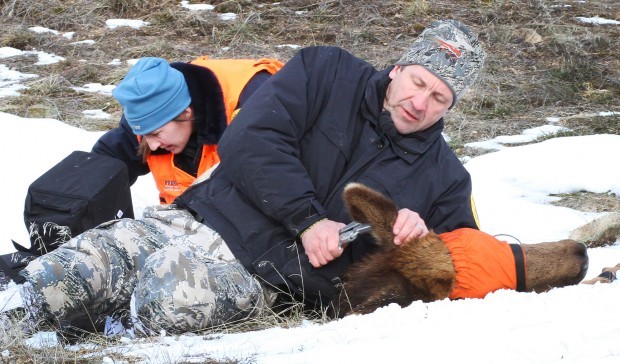 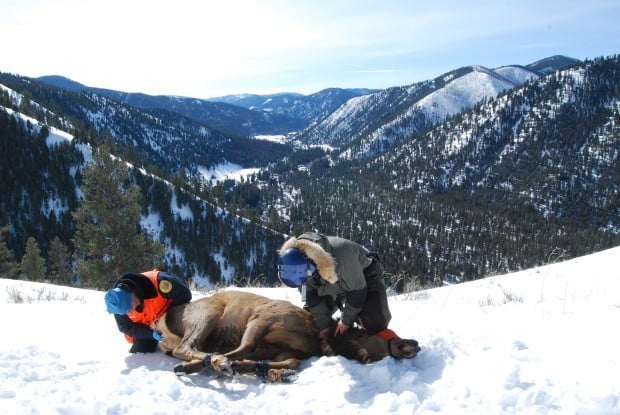 FWP biologist Kelly Proffitt works alongside one of the New Zealand crew members to collar an elk earlier this week.
By PERRY BACKUS - Ravalli Republic

The mapmakers are at work.

Scattered across the east and west fork drainages of the Bitterroot, 44 newly GPS-collar-equipped cow elk are charting unknown territory for biologists each and every half hour.

From now until January, the collars will automatically record their locations in the rugged landscape in the southern reaches of Ravalli County. State biologists will also take to the air three to four times a month to check for mortality.

All of it is part of a long-awaited elk population study being conducted by Montana Fish, Wildlife and Parks and the University of Montana that is expected to last through 2013.

Once each elk was captured, hobbled and blindfolded, a crew of FWP biologists spent about 15 minutes placing the collar around their neck, drawing blood, using an ultrasound to measure body fat and then ear-tagging the animal.

"The older the cows, the ornerier they were," Jourdonnais said. "Once you got the hobbles off, you just had to hope they'd go in the right direction."

Even before the last elk was captured, the biologists were already learning something new about the herd.

Most of the elk captured over last weekend were in the 6- to 12-year age class.

Just last week, the same helicopter crew captured about 100 elk in the Ruby River area of southwest Montana. The average age there was closer to 3 or 4 years.

"It was an eye-opener for us," Jourdonnais said. "It may be an indication of lack of calf production. ... From the other capture work that Kelly (Proffitt) and I have done, the age factor was noticeable."

In the upper West Fork area, the biologists also noticed the body condition of the captured cow elk was not as good as the other side of the valley or from southwest Montana.

"We didn't see a lot of elk in great condition," Jourdonnais said. "They did seem to be in tougher condition than what we saw in the Ruby. It is a tougher winter range."

While the public's focus on the study has been the interaction between elk and wolves, Jourdonnais expects biologists will learn much more than that over the next three years.

"We are trying to build a baseline of information about wildlife in the Bitterroot," he said.

Researchers did capture and collar two wolves from the Divide Pack that live in the East Fork area last Saturday.

"It's rare to get the opportunity in a single watershed to do a comprehensive study like this," he said. "People are excited about how comprehensive it is. Nationwide, there are a lot of sportsmen groups interested in big game. They know they need solid data to effectively manage big-game populations. They've been willing to support this project."

The Rocky Mountain Elk Foundation recently offered $30,800 to help pay for the $50,000 calf-collaring portion of the project. Additional funding was provided by FWP, a U.S. Forest Service RAC grant, the University of Montana, Ravalli County Fish and Wildlife Association, Montana chapter of Safari Club International, Hellgate Hunters and Anglers, Montana Bowhunters Association and a collection of other private entities.

Blake Henning, the Elk Foundation's vice president of lands and conservation, said there are a number of reasons why the organization decided to step forward.

First, Henning said they know that elk populations in the West Fork have dipped dramatically over the last five years.

"We want to know what's going on there," he said. "Credible science is something that we're very much interested in, especially the interaction between large predators and elk."

The researchers - Jourdonnais, Proffitt and the University of Montana's Mark Hebblewhite - are "very much respected" around the state and country, he said.

"They are asking some questions that hunters and all of us want to know the answers to," he said. "What is happening to those elk calves? Why is their mortality rate so high? What's happening to them throughout the year?"

There are groups out there who throw around facts and figures all the time, Henning said.

"We wonder where their information comes from," he said. "Having credible people doing this research is important."

Tony Jones, president of the Ravalli County Fish and Game Association, said the information gathered by this study will be helpful in managing local wildlife populations into the future.

"Everyone gripes about wolves and the impact they are having on elk here in the valley," he said. "Opinion is not enough. The U.S. Fish and Wildlife Service isn't going to just take the word of anyone living in the Bitterroot."

"They want solid proof," Jones said. "That's one of the reasons Idaho was ahead of us in the 10-J process. They spent $2 million to document their situation."

The fact that the study is being funded in large part by private donations from a variety of different groups is a good indication of just how valuable the Bitterroot's elk herd is to people around the country, he said.

"We all value elk in Montana as an important resource," he said. "We are so lucky to have this study happening right in our backyard."

Jourdonnais said the community has been supportive all along.

"I'd have to say hats off to the local community and the landowners," he said. "We couldn't even have got in the front door with this study if they hadn't allowed us to operate on their property. It was a community effort from the very beginning."

Reporter Perry Backus can be reached at 363-3300 or pbackus@ravallirepublic.com.

Home upgrades with the best returns

Watch Now: Tips to get the most out of your home security system

Watch Now: Tips to get the most out of your home security system

Things to avoid in the kitchen with toddlers

Things to avoid in the kitchen with toddlers

Sportsmen who want to hunt elk in the West Fork of the Bitterroot will need to draw a permit this year.

Biologists Craig Jourdonnais and Kelly Proffitt stand clear after taking the hobbles off one the elk captured over the week. Unfortunately, this cow and one other died from injuries sustained in the operation. In total, 44 elk were collared over a four-day period in the east and west forks of the Bitterroot.

Once the elk's feet were hobbled and a blindfold placed over their eyes, the animals calmed down significantly.

A team from New Zealand manned the helicopter and net guns used to round up and capture elk in the east and west forks of the Bitterroot last week.

FWP biologist Kelly Proffitt works alongside one of the New Zealand crew members to collar an elk earlier this week.
© Copyright 2021 Ravalli Republic, 232 Main St. Hamilton, MT | Terms of Use | Privacy Policy
Powered by BLOX Content Management System from TownNews.com.
You don't have any notifications.