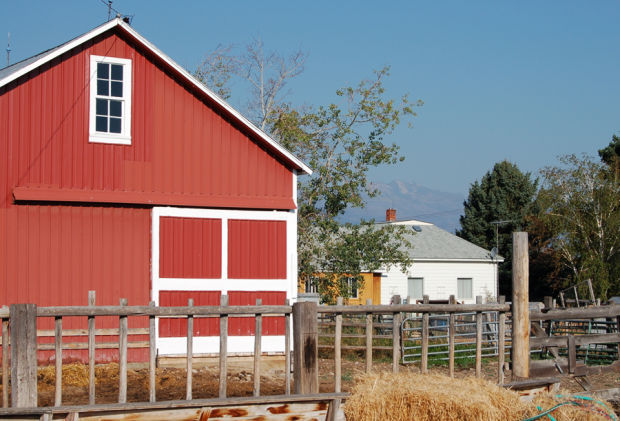 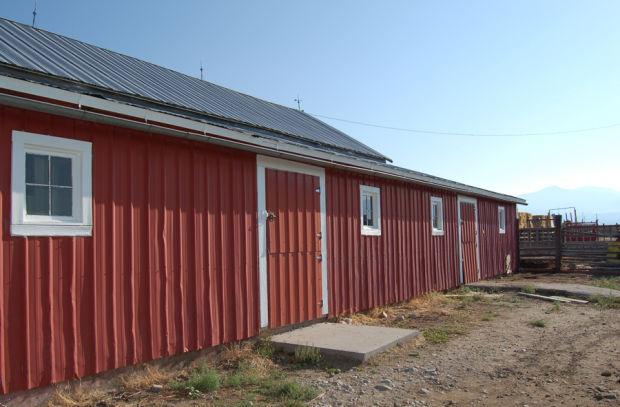 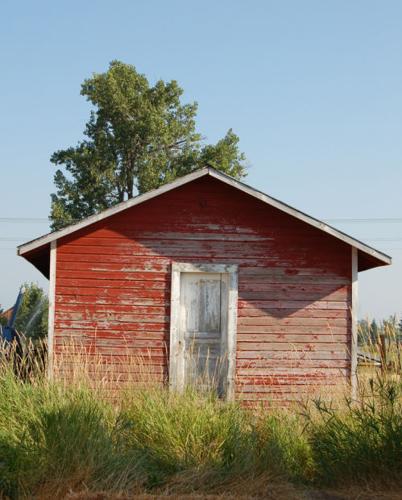 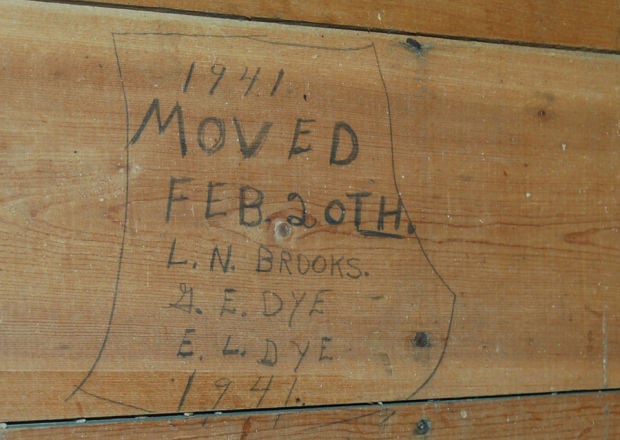 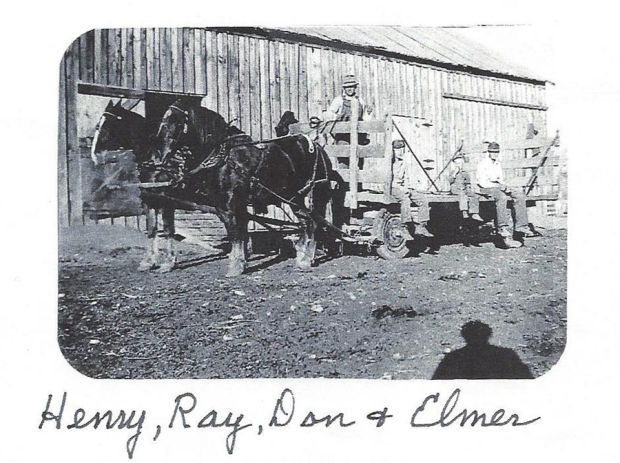 Story and photos by WENDY BEYE

Bob and Jane Popham, and Kyle Tintzman, age 13, is just finishing up a plate full of steaming pancakes when I show up to interview his mom and dad about his great-grandpa Henry’s barn.

Because the Ravalli County Fair is in full swing, I ask him, “Are you showing any 4-H animals at the fair this year?”

I don’t pursue the issue, and his mom Wendy, dad Henry (named for his grandfather), and Henry’s mother Leslie sit down to talk about the family’s history on the ranch near Corvallis.

“We don’t really know all the history of the place, but we have some old family photos copied for you,” Henry tells me.

There are several aerial photos, but the ones that interest me the most show the family seated on a horse-drawn wagon in 1941, with the barn in the background, and another that snaps Grandpa Henry standing in a very wet sugar beet field. The barn is unpainted weathered wood, and the wing on the south wall has yet to be built.

“They had just moved the barn, dragging it with teams of horses, from a dairy farm about a quarter mile east of here,” says Henry. “It was built by a man named Toftoy. He had a hundred dairy cows, and big apple orchards. The barn was used to store grain to feed the milk cows.”

Apparently Grandpa Henry need a jump start to get his farm up and running as quickly as possible, and decided that buying the neighbor’s barn was a good idea.

I ask if anyone knows how they managed to drag a barn a hundred feet long and twenty-five feet wide that far, and uphill to boot. We decide that they might have pulled it off its foundation onto a bed of smooth logs that would roll as the horses heaved it forward. As one log exited behind the barn, it would be moved to the front, and the process repeated until the building was in place. Henry says there are enormous beams running the length of the barn under the plank flooring, so it was likely strong enough to withstand the move without damage. Even the original windows survived the trip.

All of us troop on out to the barn, which now sports red metal siding and a gray metal roof to save time and paint costs. Several barn cats join the procession. We step into the cool interior, and I can’t help looking up. The barn’s rafters are festooned with gauzy white draperies, in preparation for a family wedding. The building is immaculate, except for a drift of bird feathers that point to a recent massacre perpetrated by the cat clan. Wendy has obviously been spending hours that will pay off with a memorable day for her daughter. Henry has covered the old plank flooring with clean new chipboard, and there isn’t a cobweb in sight. I comment that I’ve never seen such a sparkling old barn. The perfectly planed planks that formed the back wall of the grain bins look as if they’ve been polished. All the bin dividers have been removed. They show me the carved words on a plank that date the barn to 1917, and point to a builder named W.C. Severns.

I hear the click of billiard balls, and we step down into the old milking parlor. The stanchions have been replaced with a wood stove for winter comfort, and a red-topped pool table. Young Kyle is practicing his bank shots. The walls in the parlor are whitewashed, and there is an old refrigerator from the 1940s standing in an alcove. Leslie assures me that it still works, but the door seals have deteriorated and can’t be replaced.

I take more photos outside, and ask about a small shed located behind a towering hay stack. Henry says it served as housing for field hands that came from Mexico to help his grandfather with the sugar beets he planted every year. The crop was processed in Missoula during the early years, then when that refinery closed in 1965, shipped to Billings. The railroad ended its beet transport program in about 1978, and the family switched to beef cattle, breeding shorthorns, which are not too common in the Bitterroot. While Grandpa Henry’s dairy was still in operation, the sugar beet tops were turned into silage for the milk cows. The dairy operated until about 1973, with milk and cream going to the Corvallis Cheese Factory and later to the Hamilton Creamery.

Leslie offers to take me to her home just around the corner to show me the property title abstracts. While we are sorting through the convoluted chain of ownership, from homestead deed, through a number of absentee owners, to Marcus Daly, to Toftoy, to Legreid, to Tintzman, we chat about her family. She points with pride to a 20-acre alfalfa field that nearly surrounds her house and tells me, “Kyle took care of that field all summer. He moved wheel line sprinklers, ran the swather to mow the hay, raked it, baled it, and used a self-propelled bale wagon to pick it all up. His dad helped him unload the stacks, but otherwise, he did it all himself.”

Now I know why Kyle doesn’t have time to raise any 4-H animals. His dad wasn’t in 4-H either. The Tintzman tradition is hard work, followed by more hard work.

The Bitter Root Cultural Heritage Trust works in partnership with families, neighborhoods and communities to restore historic structures, bring back traditional events and celebrations, encourage interpretation and affirm cultural values. The Heritage Trust provides an article for each edition of Agricultural Magazine, highlighting the Bitterroot Valley’s agricultural history and heritage.

How to cook safe at your summer BBQ

Survey: Adults only feel mentally and physically well 47% of the time

Survey: Adults only feel mentally and physically well 47% of the time

Things to negotiate for besides salary in a job interview

Things to negotiate for besides salary in a job interview