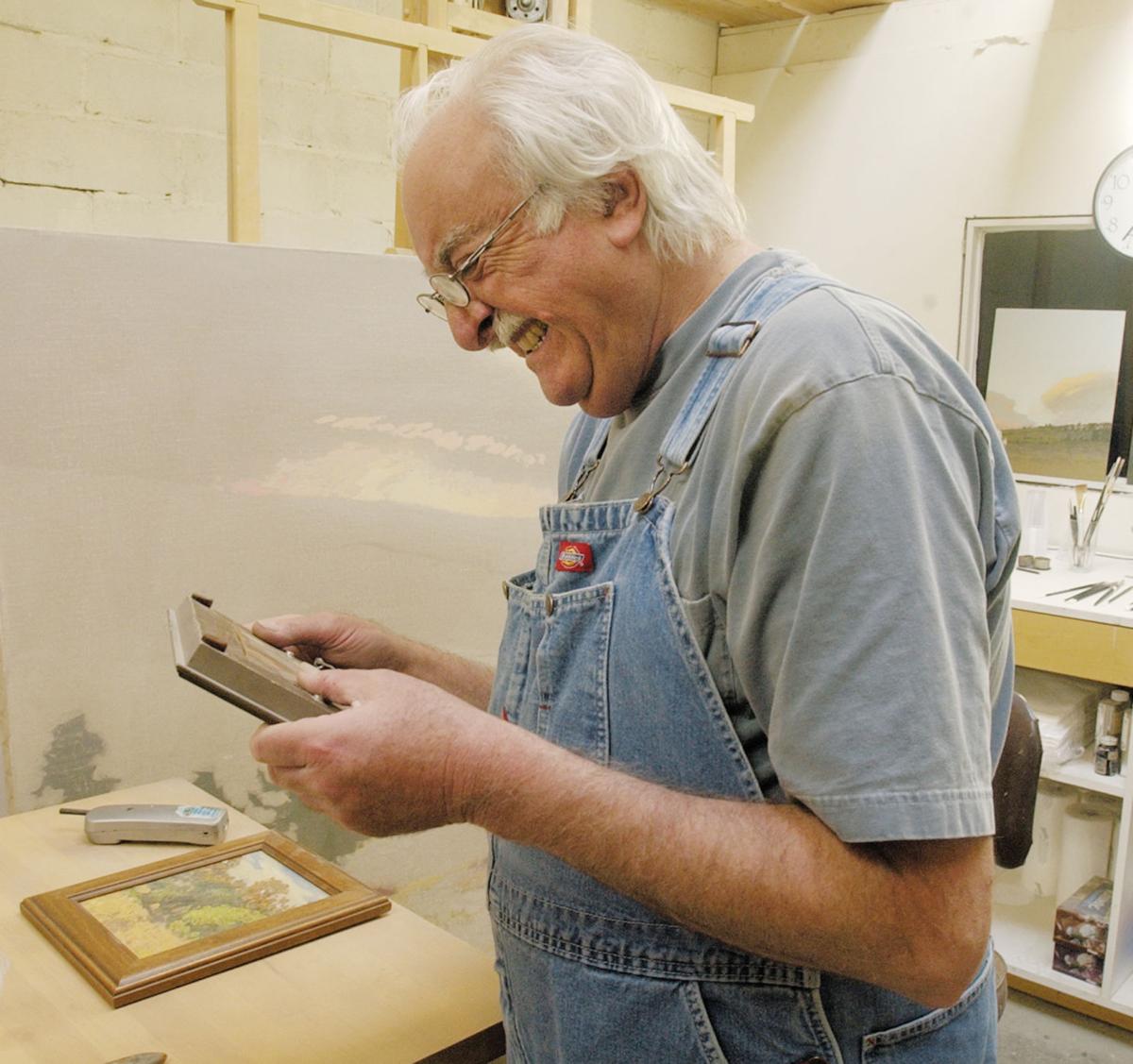 Russell Chatham marvels over one of his grandfather Gottardo Piazzoni's landscape paintings. 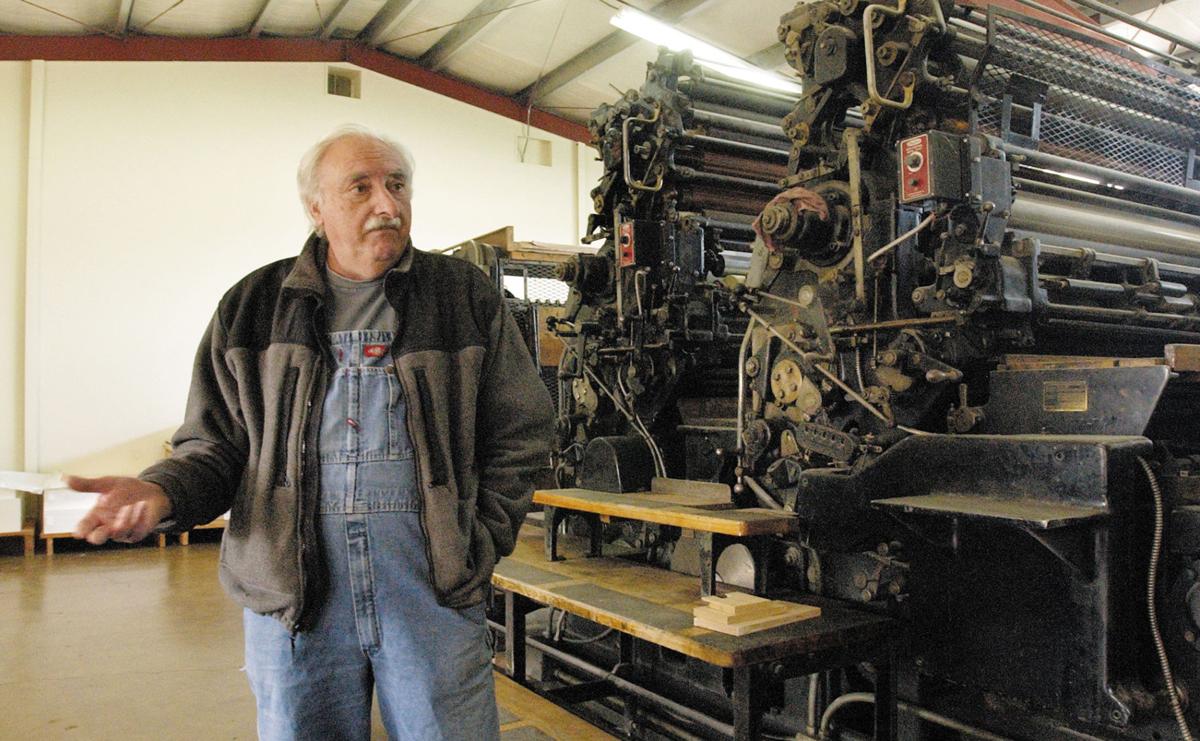 Russell Chatham with the press used to print his lithographs. 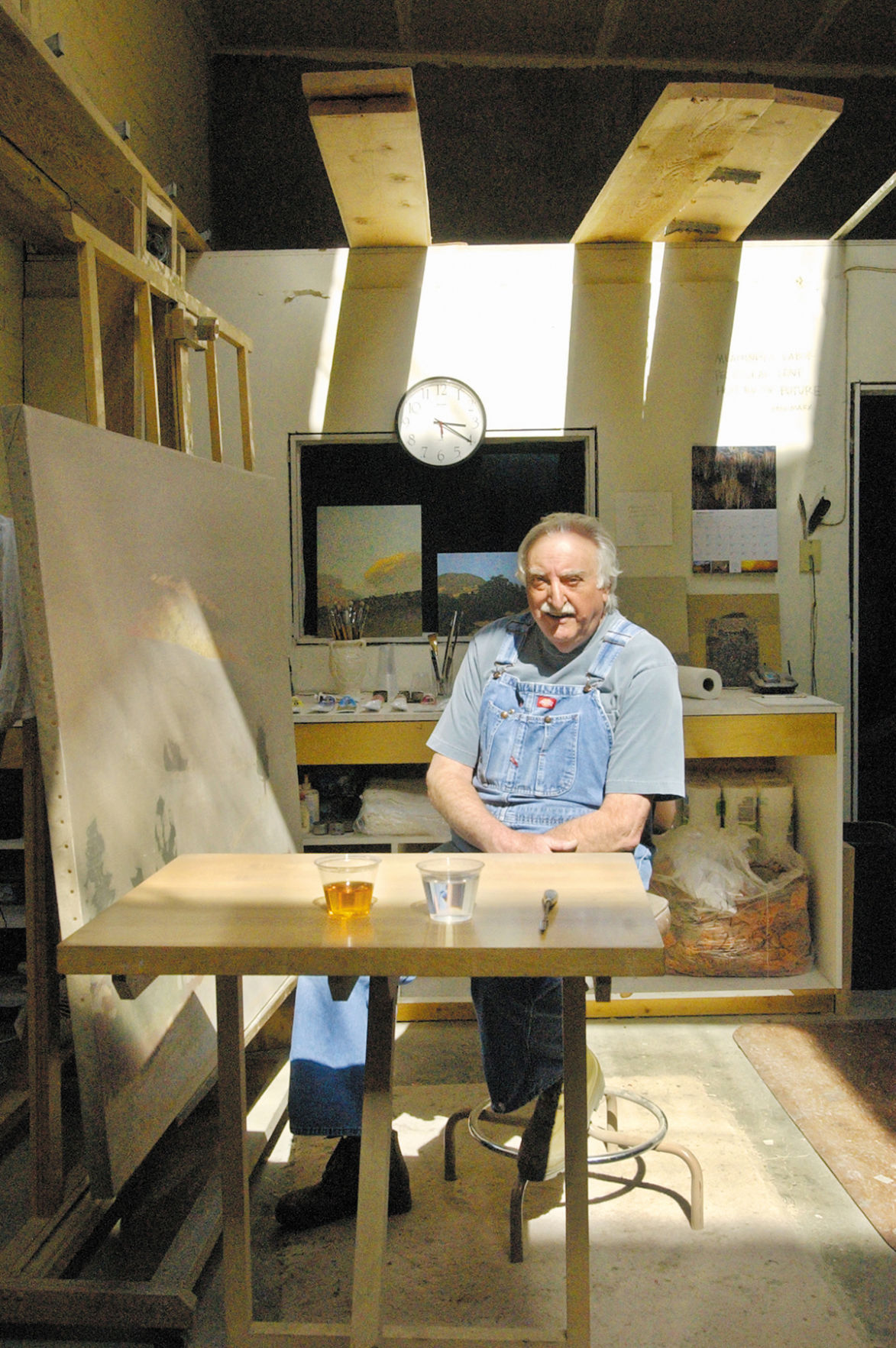 For four decades, Russell Chatham worked and made his home in Livingston. The painter, author and lithographer was also the founder of Clark City Press and the restaurant Russell Chatham's Livingston Bar & Grille. 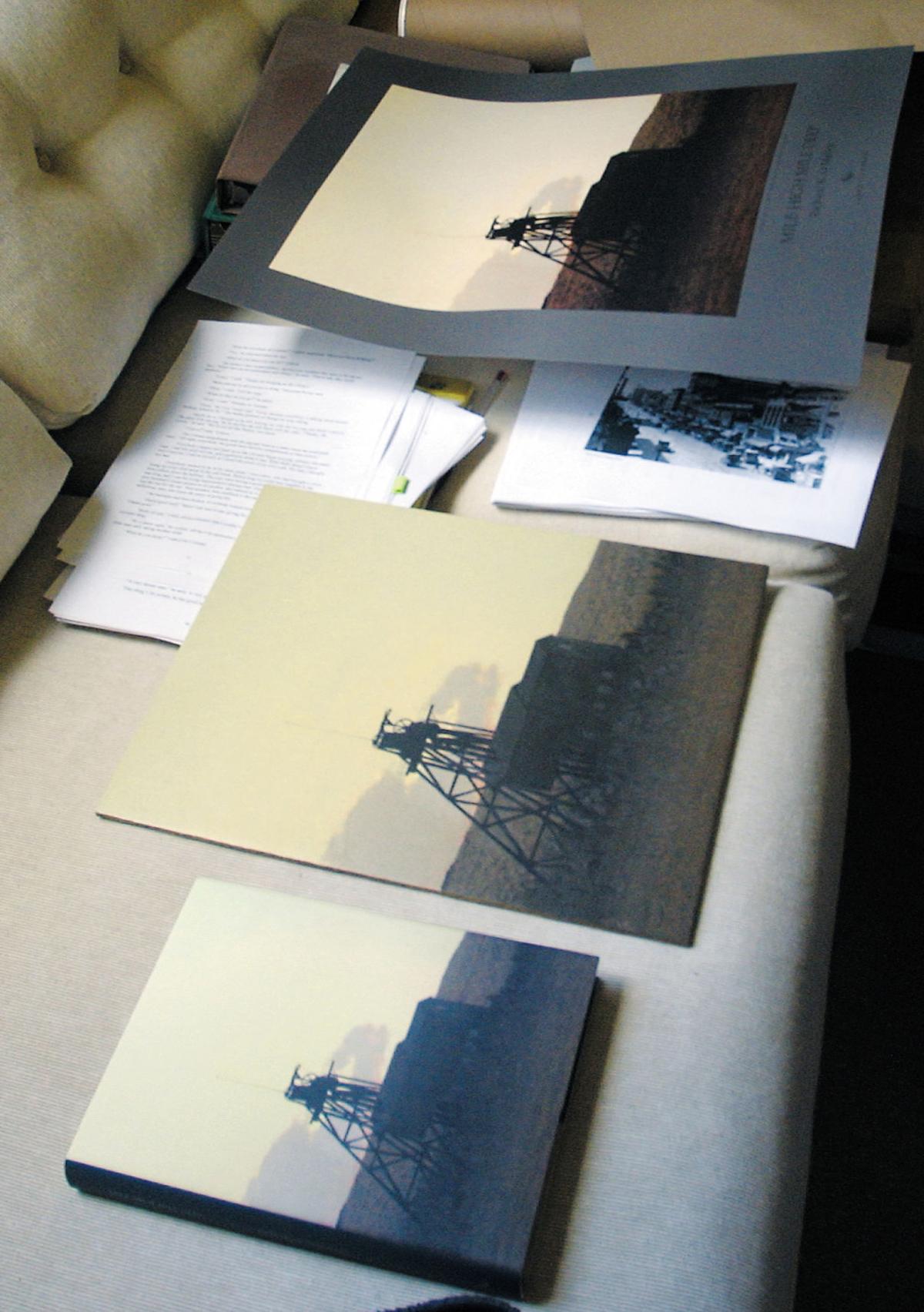 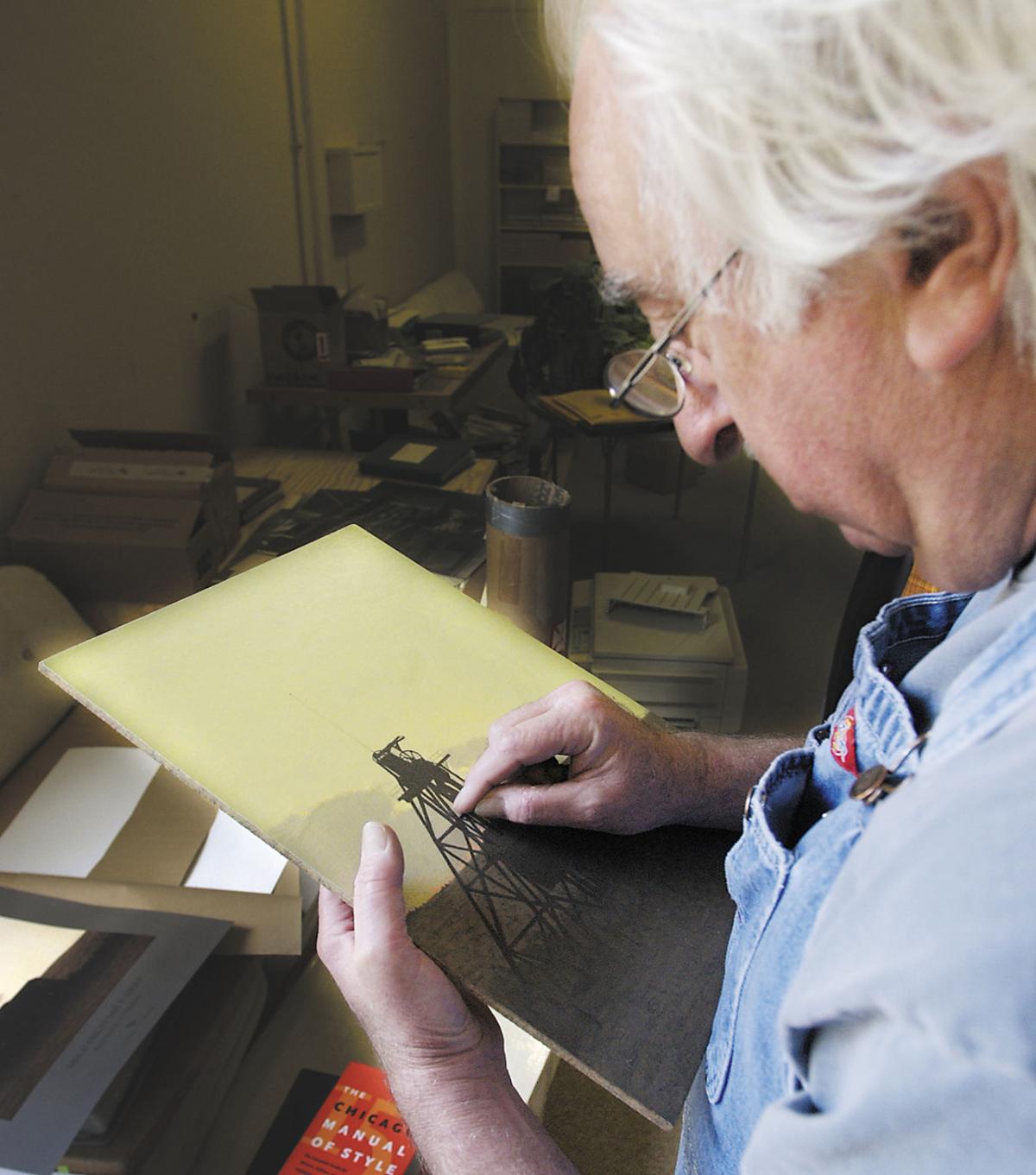 Russell Chatham recalls how he used the smallest brush he had to paint the Orphan Girl headframe for the cover of "Mile High Mile Deep". 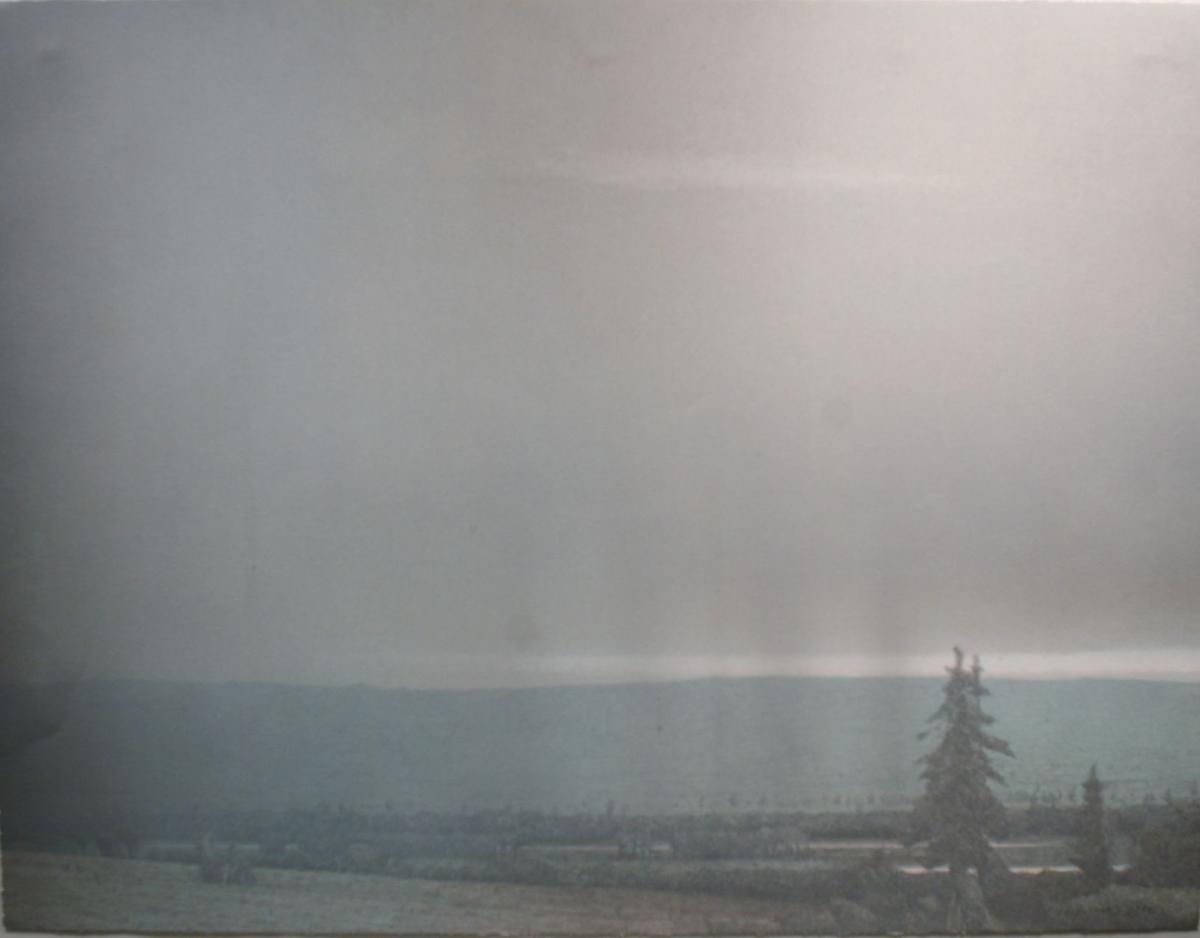 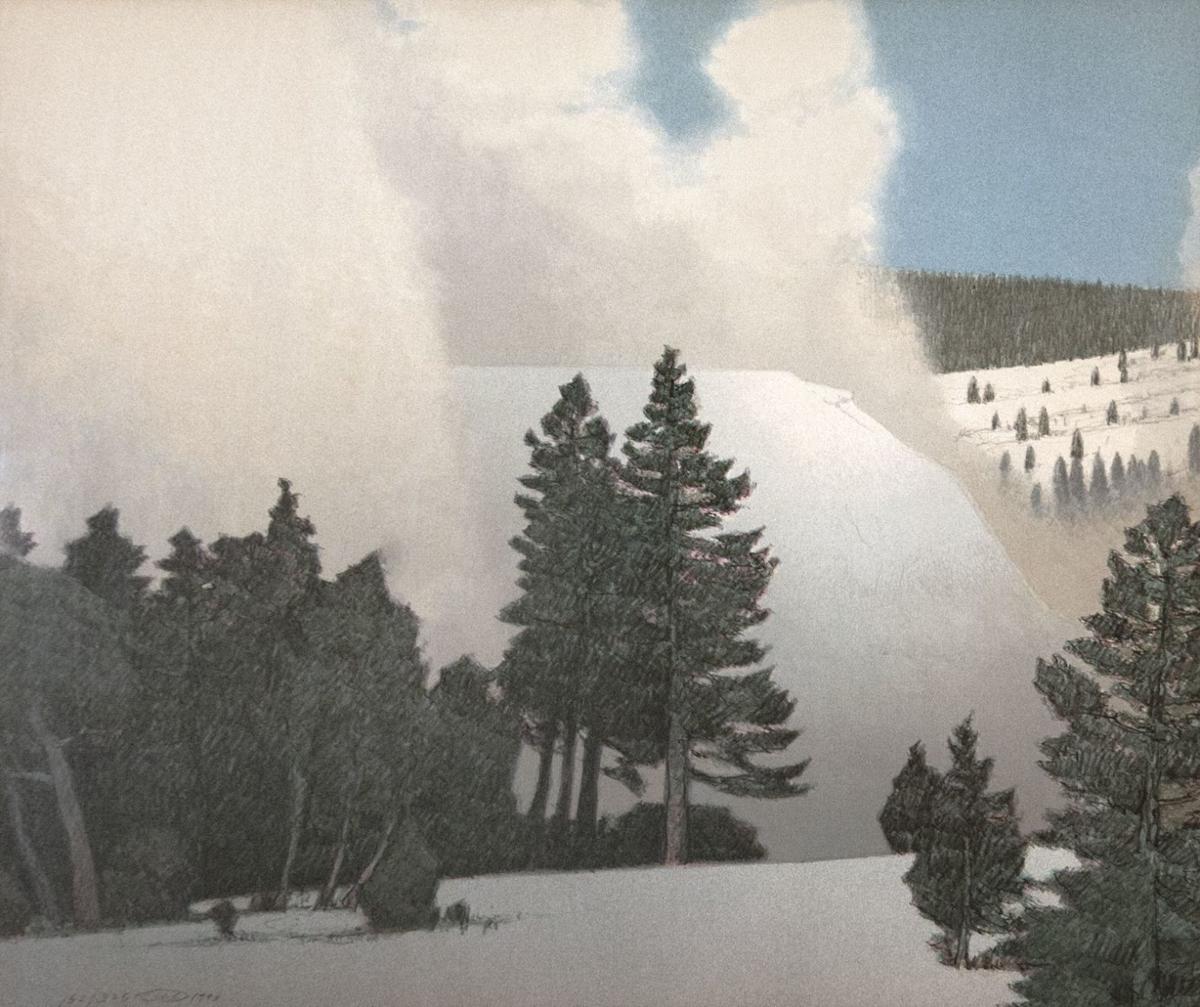 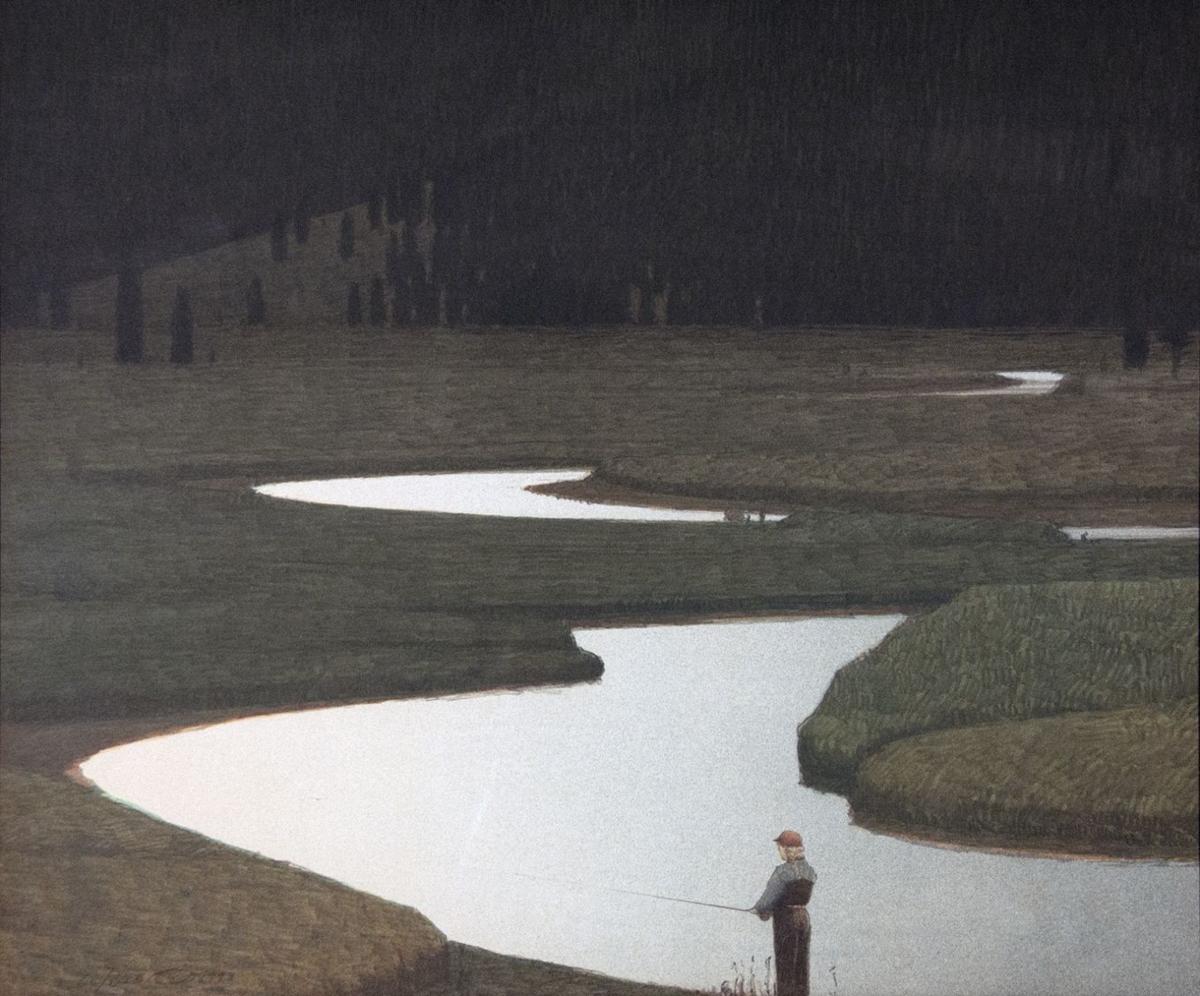 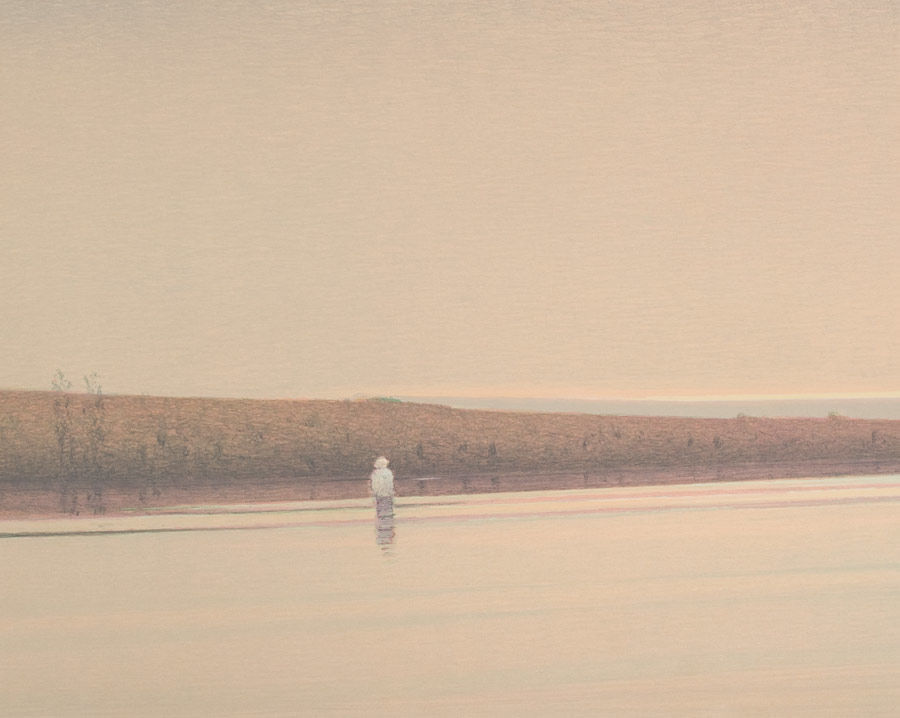 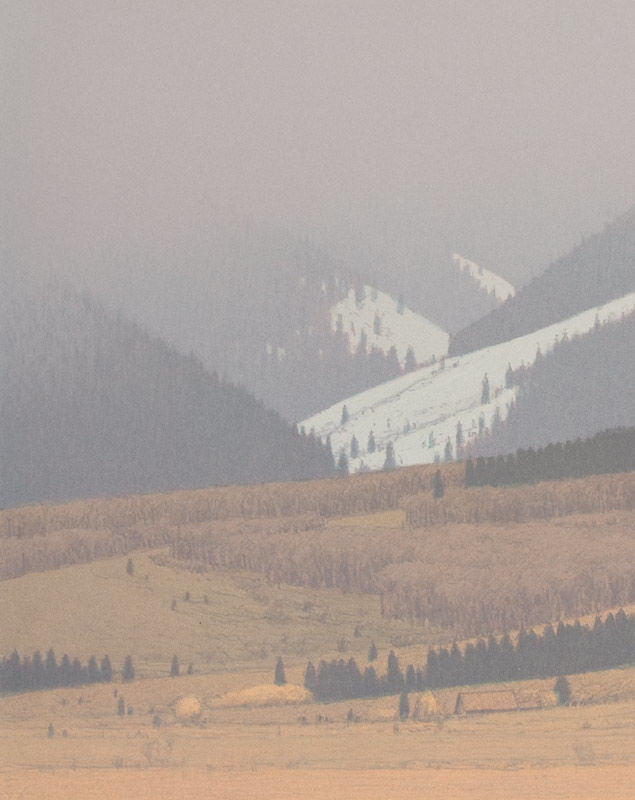 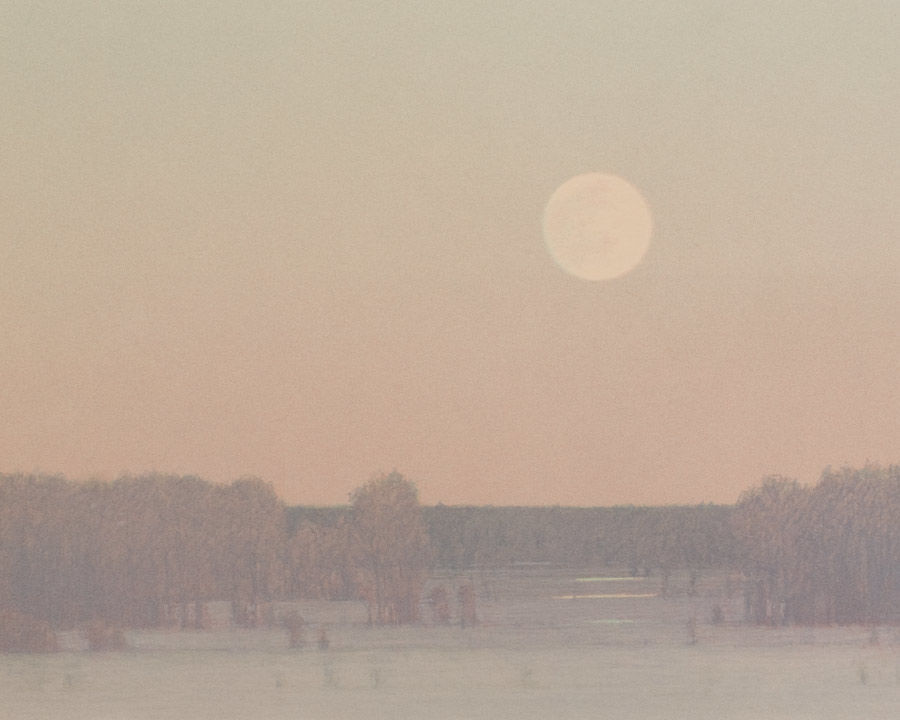 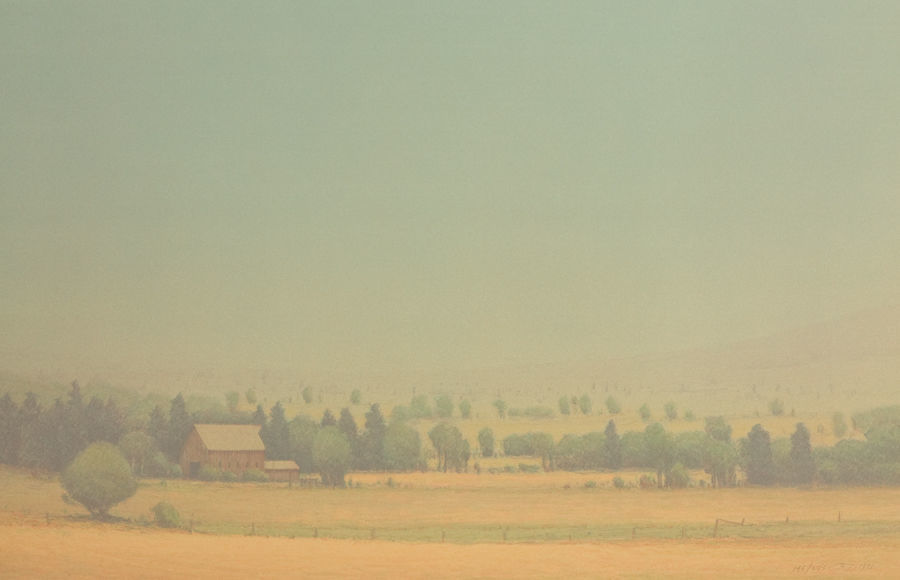 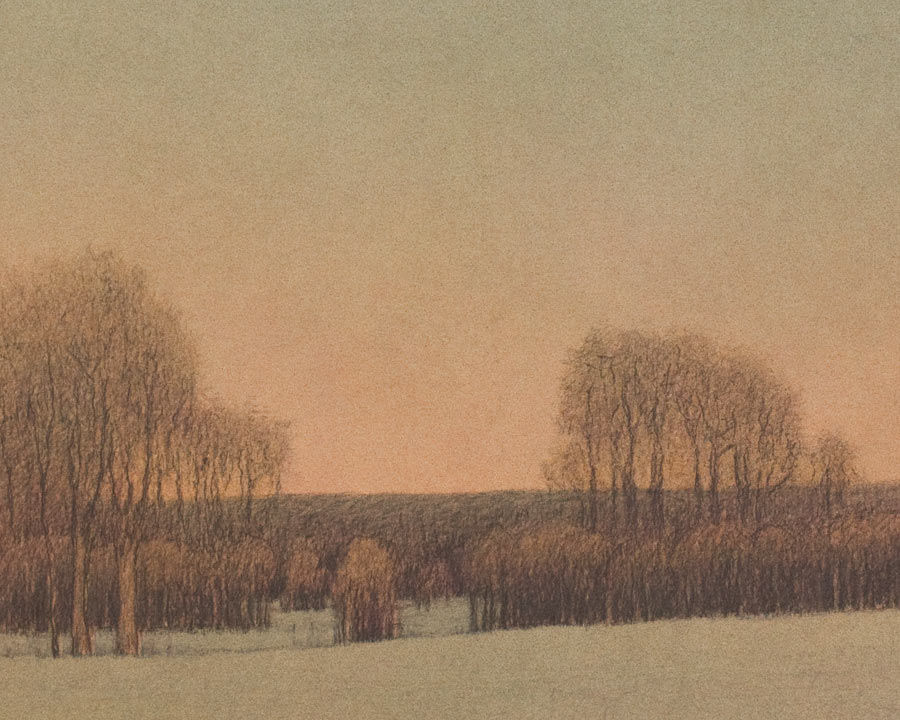 Russell Chatham marvels over one of his grandfather Gottardo Piazzoni's landscape paintings.

Russell Chatham with the press used to print his lithographs.

For four decades, Russell Chatham worked and made his home in Livingston. The painter, author and lithographer was also the founder of Clark City Press and the restaurant Russell Chatham's Livingston Bar & Grille.

Russell Chatham recalls how he used the smallest brush he had to paint the Orphan Girl headframe for the cover of "Mile High Mile Deep".

In 1989, working at The San Francisco Examiner, I edited a column by Hunter S. Thompson somberly titled “The Death of Russell Chatham.”

It was a high, crazy joke between two very good friends — Thompson and Chatham — and Russell’s actual passing was the last thing any of us, in those rather bubbly days, was required to contemplate.

Both principals involved in that prank are gone. Thompson has been dead for more than a decade. And now, we are forced to bear the actual death of Russell Chatham.

Russell did so much, was so much, that it’s hard to begin to do him justice. He was one of the preeminent landscape painters of his age — but that’s almost damning with faint praise. His work stands up with the very best of any age — and the reason is that he knew he owed a debt to those who came before, and he understood how to pay it. He had no patience for painters who didn’t connect with their antecedents — and the number of Western painters he put into that category was large. It was essential, he told me, to know and respect what had been accomplished before.

For a startling prequel to Chatham’s work, explore the work of his grandfather, Gottardo Piazzoni, a man of Italian heritage born in Switzerland who emigrated to America, settling in California and becoming, if not widely famous, very much respected by those who understood painting. Chatham became a painter because he loved his grandfather so much — but by any measure his own career eclipsed Piazzoni’s.

Chatham began to paint and began to fish as a little boy in California. While one could argue that his writing — and his cooking — were of equal caliber, the painting and fishing were how most people knew him best.

All four disciplines require precision, and Chatham, despite the physique of a dancing bear, had precision in large quantities. Even so, the long laundry list of accomplishments doesn’t get to who Russell was.

His humor was as broad and bawdy as his life. I will always remember him laughing loudly. Anyone who knew him heard that laugh frequently — heard it and saw it, his big wide grin giving in to the full-on guffaw. I will remember him, too, sitting in a child’s sand-box, completely entranced in the world of his then-four-year-old son Paul; painting in his hideaway studio in Livingston that looked like a machine shop from the outside; eating, and eating, and drinking, and drinking more. (“My girlfriend tells me I drink too much,” he told me one night in my living room, sitting next to several very empty French bottles that had very recently held very good red wine. “But I reject that. Because after long research, I have discovered that I drink just enough.”)

But most of all I will remember him walking the banks of a little creek in the back country of central Montana, eyes glued to the water’s surface, a tiny fly rod in his huge right hand.

He loved many things and many people, and loved them to distraction. He loved places, too, like Livingston, Montana, his home for four decades. And his precious Marin and Mendocino coast. And just about any river, bay or lake, anywhere, that might offer the promise of a fish. For many years he owned the world record for striped bass taken on the fly, a 36-pound, 6-ounce fish taken on a 15-pound-test tippet. He would catch thousands of stripers in his life, and thousands of trout, and thousands of other fish. He respected and loved and understood fish in a way that was all but unique.

His book “The Angler’s Coast” is one of my favorite fishing books, evoking a golden age in angling, a precious place, and a wonderful fishing relationship. I found his writing, as is so often the case with the very best, to be a perfect mirror of his own sensibility: Accessible, beautiful, intelligent, fiercely honest.

In a life lived with many lances fearlessly broken against many windmills, perhaps his most improbably quixotic feat was creating a restaurant in Livingston that was unquestionably one of the best in America. And it lasted 10 years. Both of those facts are stunning.

He hired and fired chefs; it was generally impossible for their vision to sync with his. I like to think that some of his happiest days were spent cooking at Russell Chatham’s Livingston Bar & Grille.

I remember walking into the B&G one night, and Russell saying to me, “I have something for you to try.” And he returned from the kitchen in a few minutes with a lovely small plate of six perfect head-on Apalachicola shrimp, which had been alive 10 minutes earlier. An absolutely astonishing thing to encounter in the middle of Montana. Accomplished by Fedexing signed lithographs to his great friend Charles Morgan in Destin, Florida, who promptly Fedexed back the shrimp. And fabulous grouper. And speckled trout, and any number of things a Montanan could never reasonably expect to find on his plate.

Never a wealthy man, Russell made good money from painting and spent it very well, and thoroughly. He was generous to a fault, frequently giving startling sums to needy people, and organizations helping people, and helping his friends in innumerable ways, large and small, whenever he could.

Many Montanans would thank him if they could for the wonderful books he published at Clark City Press, an exquisite little publishing outfit he started and ran for a few years. Wonderfully for Butte, two of those books were Richard O’Malley’s fabulous “Mile High, Mile Deep” memoir and “Moving On: The Unpublished Poetry of Ed Lahey.”

Then one day he was gone, leaving Livingston almost overnight after very suddenly buying a bunch of land and equally suddenly giving up on it.

He moved back to his home coast country north of San Francisco, where he painted and wrote for the last eight years of his life. (For a portrait of Chatham in those later years, read Rick Bass’ fabulous story in Field & Stream.)

The works he created during his four decades in Montana are so beloved by so many. Of course he had fabulously wealthy friends who collected him, like Jack Nicholson and Paul Allen. ("Once again I need to make a painting to save my own life," he told me in early 2009 in Seattle, where he had come to solicit a commission from Allen. He got one — for $100,000.) But he made his art available to working-class Montanans on posters that became known as “Montana wallpaper” for their ubiquity.

Everyone knows and admires the "Missouri Headwaters" series, the beautiful sprawling study of the Montana seasons. But the astounding thing is how well he captured small, intimate pieces of the Big Sky landscape.

Now, when I walk in the woods or along a creek, and I look up to the horizon, or perhaps only as far as the red willows along the stream bank, I see Chatham paintings. He changed the way I perceive the landscape I love.

And that sensation of painterly déjà vu will be repeated, for many people, for many years. He has given us that.

Thanks, Russell. We'll miss you, here in Montana.