“Montana Story” isn’t being coy about where it’s set and where it was shot.

There’s the name, for one. No subtlety, no metaphor. Here’s a story in Montana. It’s the sort of to-the-point brevity that might get you elected for public office around here.

And then there’s the film itself. It opens with the unmistakable peaks of Paradise Valley, all sun-dappled and postcard ready. Discerning Montana theater owners could do a promotion where eagle-eyed viewers get a dollar every time they spot a little Montana landmark.

It is indeed Ringling, the tiny town making what has to be its first appearance in a film from a major Hollywood studio.

Choosing to shoot in Ringling feels integral to the idea of what “Montana Story” is trying to do. Ringling isn’t the soaring mountains of Glacier or the crystalline waters of the Blackfoot. It’s a small, middle-of-nowhere town. Ringling is one of those places people like to point to as the “real Montana,” a tiny speck of civilization dominated by the enormity of the landscape all around.

That feeling abounds in “Montana Story,” a small, intimate drama about people dwarfed by the enormous peaks around them, both literal and figurative.

The film stars Haley Lu Richardson and Owen Teague as Erin and Cal, two estranged siblings returning to their childhood ranch — in Paradise Valley — to care for their dying father. Cal wants to put their father’s elderly horse down, but Erin commits herself to saving it.

The story doesn’t complicate as much as it gets richer and deeper as it goes along, unwrapping its simple premise until it becomes about abuse, environmental misconduct and broken family relationships.

Kimberly Guerrero, Gilbert Owuor, Asivak Koostachin and Eugene Brave Rock round out a cast so small they could all fit in one pickup truck.

“Montana Story” was written and directed by Scott McGehee and David Siegel, longstanding creative partners. It’s the sixth movie the pair have made together, and their first since 2012’s “What Maisie Knew.”

Last year, “The Power of the Dog,” an adaptation of Montana-raised writer Thomas Savage’s novel, substituted New Zealand for Montana. It was nominated for 12 Oscars.

It’s not alone. “Legends of the Fall” chose Canada for its depictions of the Montana frontier. More recently, both “Sonic the Hedgehog” movies were set in Montana but shot elsewhere, depriving the state of the big money that film productions can bring in.

It was the fear of losing more of those that prompted the Montana Legislature to pass the Montana Economic Development Industry Advancement (MEDIA) Act in 2019. The Act offers a tax credit to any production that films in Montana.

It seems to have worked.

McGehee and Siegel mentioned the tax credit as a driving force behind their decision to pick Montana. The state’s low COVID numbers during the movie’s production in early winter 2020 also made it a desirable location.

But it certainly wasn’t all hard logistics that lured the filmmakers to Big Sky sky country.

“We’re really location-driven film directors,” said Scott McGehee. “We get a lot out of the location emotionally and visually.”

They could only achieve that by physically being here. It’s an old cliché that locations can become film characters, but there is some truth to it. “Montana Story” could theoretically shoot in any farm house, but it wouldn’t quite work if the audience couldn’t see the peaks of the Absaroka range through the windows.

There's a scene that perfectly captures the abject despair of scrolling through Montana Craigslist trying to find a reasonably-priced pickup truck.

News bulletins about the Dakota Access Pipeline and the fear of buckweed encroaching on the Yellowstone River play diegetically in the background, like an ever-present narrator reminding our small town Montanans about their place in the bigger world.

Most of the movie was shot in Paradise Valley at the O’Hair Ranch, in addition to some work in the Shields Valley, the Golden Sunlight Mine near Whitehall, Livingston and Ringling.

However, during the writing process, neither McGehee nor Siegel had ever actually been to Montana. “It was bit of a blind date,” McGehee joked.

The story's themes, about the unique combination of landscape and loneliness one finds in the West, came from the directors’ childhoods growing up near the Sierra Nevada Mountains in California.

“Some of the stories grew out of our own experiences and sort of was mapped onto Montana, through Google searches and whatnot,” Siegel said of the writing process.

Once the pair actually got to Montana, Siegel said “it was familiar on a certain level, but [the state] sort of blew our minds in a more expansive way.”

Actor Owen Teague also hadn’t been to Montana before production started. Stuck in a Bozeman hotel as he waited through COVID quarantine, he realized he could still explore as long as he stayed isolated.

Teague went by himself up to the Hyalite Canyon Recreation Area south of Bozeman. He was struck by the natural beauty of the place, especially by the iconic Palisade Falls, which freezes over in the winter.

“It was just this dripping sculpture of ice,” he said. “It was so cool. I had a great time filming [the movie].”

Teague also mentioned shooting in Ringling, and admitted there was something “a little freaky” about being in the tiny town.

“It was just so small,” he said. “And it was very desolate. You did feel like, you’re out in this town and nothing is around. If something happens, that’s it. You can’t get help out here if you needed it. But at the same time, it was kind of fun. I like places like that.”

Like many Montana visitors before him, Teague found a respite from the backwoods with the people he was around. Which, in this instance, was the cast and crew of “Montana Story.”

“I got really lucky with Haley,” Teague said of his co-star. “We did feel like siblings.”

With such a small cast, camaraderie among the actors is even more important than usual.

“We all liked another and there was nobody else around,” Teague said. “It’s important. And that goes for the whole crew and [directors] Scott and David. I was very sad to leave those people. They became my friends.”

That cast of friends is, notably, not the racial hegemony of white people often portrayed in movies set in the West. Guerrero, Koostachin and Brave Rock are all Indigenous, Owuor is from Kenya. The cast looks like the real Montanans who populate real Montana.

“When we started thinking about a story set in [Montana],” Siegel said, “the Indigenous people were something that we had to and wanted to consider. The central theme of the story is about place and home, and what we call home and why we leave home and why we come back to a place. We thought that the story about this brother and sister had to take into account the other people around them and who had been there before them and who was going to be there after them.”

Ultimately, Siegel said, “It’s something that we hope speaks to something enduring.”

Brave Rock, who had a big role in “Wonder Woman” a few years back, was the big draw when they filmed in Ringling.

Even the Montana elements had to work their way into the movie. The November film shoot went pretty well, for the most part. But one bit of weather that refused to play along is familiar to most Montanans: wind.

“The wind itself really played a big part in helping tell the story,” Siegel said.

Teague elaborated, talking about how the first scene they shot was racked with “these insane 40 mile an hour winds.”

That scene in question takes place at the Golden Sunlight Mine. The giant open pit mine looks like a chunk of flesh was removed from the earth, leaving behind a gaping maw. The wind whips around Teague and Richardson’s characters, blowing their hair into their faces as they deliver their lines.

“Somehow the sound team captured all of it,” Teague said. “I don’t know how, they’re amazing.”

It’s good that they got it, because the scene contains some of the movie’s best lines about Montana, the wildness of the place and the people who try to tame it.

“This place always seemed like a miracle to me,” Teague’s character says. “Like they were building something into the ground. Not just digging a hole, but making something, carving one shape out of another.”

“Reminds me more of Dante’s circles of hell,” Richardson retorts, adding that the mine is “just another crime scene in the old west.”

As most people from Montana will tell you, the truth is somewhere in between.

Shot and set in Paradise Valley, "Montana Story" is showing in Billings at Art House Cinema and Pub throughout the weekend and next week. Check arthousebillings.com/montana for exact times.

Rapper Lil Tjay has reportedly undergone emergency surgery after being shot in New Jersey; and, Baltimore Ravens linebacker Jaylon Ferguson has died at age 26. Here's that and more of today's trending topics.

The basketball world awoke to heartbreaking news Tuesday when the Purdue Boilermakers announced the death of Caleb Swanigan. Get that and more trending topics here.

The Los Angeles County jury delivered the verdict Tuesday in favor of Judy Huth, who is now 64, and awarded her $500,000.

Demand for record albums continues to soar in the United States, and the manufacturing base is having to reinvent itself to meet demand.

Bestselling bands of the ’80s, then and now

Billboard charts from the 1980s were scoured for this list of 25 bands whose music was the soundtrack of the decade. Take a look at them then and now.

Was there anything real about Elvis Presley?

Presley never wrote a memoir. Nor did he keep a diary. His music could have been a window into his inner life, but he didn’t even write his songs.

Beyoncé released her new single and it's safe to say "Break My Soul" did its part to break the internet. Listen here.

"What We Do in the Shadows" fans will want to check out a new season of the horror-comedy mockumentary "Wellington Paranormal." A two-part nature series explores California’s biodiversity.

Billie Joe Armstrong is renouncing his US citizenship over the Roe v Wade ruling.

Mishael Morgan of "The Young and the Restless" won as lead drama actress, becoming the first Black actor to win in a lead category at the Daytime Emmys on Friday night.

Bono was unaware he had secret half-brother for years

Bono was unaware he had secret half-brother for years

Haley Lu Richardson and Owen Teague at the Golden Sunlight Mine near Whitehall in a scene from "Montana Story." 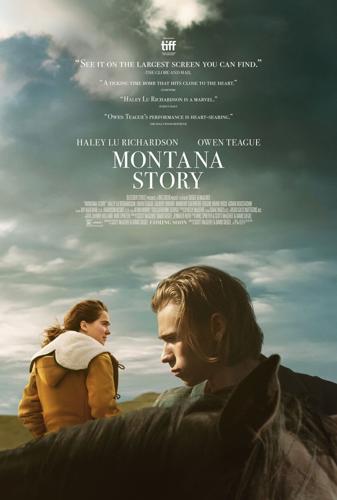