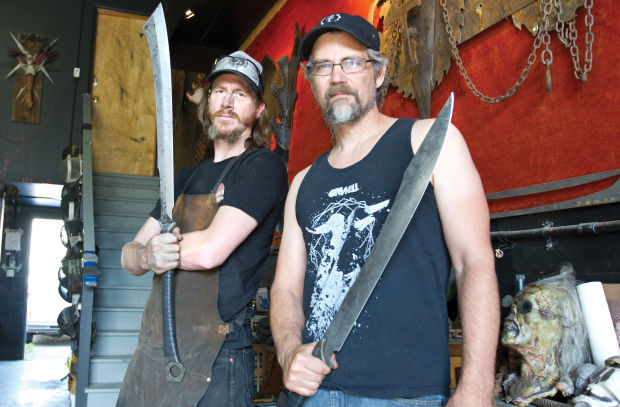 Max McCarter and Chris Lombardi, two of the the three owners at Zombie Tools, show off their apocalypse ready weapons. 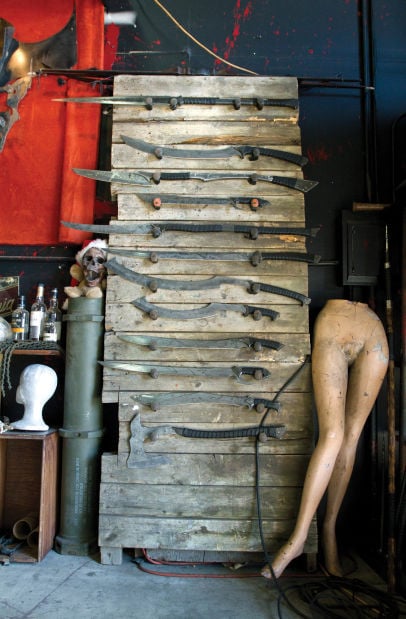 A few of the Zombie Tools including the d'Capitan, the Hellion and the Bone Machette.

By DILLON KATO of the Missoulian

A big-name director is bringing his vampire apocalypse thriller to television, and has outfitted his heroes with some Missoula-made armaments.

Earlier this year, the swordsmiths at Zombie Tools, a local company known for their brutal-looking bladed weapons, shipped some of their wares to the production team of director and producer Guillermo del Toro, which will be used in his upcoming television series, “The Strain.”

The show is based off a series of vampire horror books written by show creators del Toro and Chuck Hogan.

In all, Zombie Tools made 12 blades of varying lengths and styles to send to the team at the show. Two of them have a special added touch, the blades were given a mirror finish coating, and are meant for two of the main heroes.

“They’re supposed to be silver. Apparently that’s good for killing vampires,” said Chris Lombardi, one of the Zombie Tools founders.

It will be the second large-scale production Zombie Tools weapons have been involved in. The crew had previously worked with the same prop master from del Toro’s show in 2013’s “The Mortal Instruments: City of Bones” a fantasy movie based off a young adult book series.

The swords being used in “The Strain” are also a little different from the ones Zombie Tools normally sells. Instead of being made of steel, they are aluminum prop versions, lighter and less durable than the genuine article, and made more for the look than the function of a sword.

Zombie Tools actually made four of the mirrored blades, selling the other pair to a local business owner who told Zombie Tools co-founder Max McCarter he’s a major fan of the book series.

Zombie Tools’ business has been growing consistently from when the company first started six years ago. Now making their weapons with 10 employees out of four bays in a workshop space in the Westside neighborhood, McCarter said thousands of handmade swords have been shipped out so far.

Increasingly, they are being sold overseas. Of the last run of 130 blades the company made, about a quarter went outside the county. McCarter said they sell quite a few in Norway and Hong Kong, but Russia also has a big customer base, and even U.S. soldiers in Afghanistan have ordered Zombie Tools’ work.

“But, we had to do this a long time before we quit our dayjobs,” said Joey Arbour, the third of the three founders.

“I think the measure of how we are doing is that we have a whole area where no work gets done,” said McCarter, gesturing around the showroom bay, with finished blades handing in racks and stands on one wall and a flat-screen TV with video-game consoles hooked up to it in front of a couch on the other.

McCarter takes pride in the fact that their weapons not only have the right look, but that they are fully functional as well.

“Some people hang them on the mantle, but some actually use them. They’re clearing trees or out camping. One guy told us he killed two wild boar with his, stabbed them right through the chest,” he said.

From heat treating and tempering to grinding, wrapping the handles and making the sheaths, all of the work Zombie Tools does is done by hand. Each blade also has an acid-etch finish to give it a distinctive worn, stained look.

Lombardi spent the afternoon in office above the workshop bays, editing a video of McCarter slicing through 36 beer cans that had been set up in a row on a table with one swing of the sword the Zombie Tools guys call the Apokatana. He said they put the videos up on social media and YouTube as a form of promotion.

“These do really well for us, the last one had almost a quarter million hits,” he said.

“The Strain” will premiere on the FX channel on July 13. McCarter said he thinks their blades will make their first appearance a few episodes into the show.

“We’ll probably have a bit of a party, get the whole shop together to watch,” he said.

SPOKANE  – A zombie virus gripping the nation has hit Spokane and it’s expected to spread rapidly – to more than 1,000 actors hired to play th…

Celebs dressed to the nines to attend Fashion Awards in London

Celebs dressed to the nines to attend Fashion Awards in London

Max McCarter and Chris Lombardi, two of the the three owners at Zombie Tools, show off their apocalypse ready weapons.

A few of the Zombie Tools including the d'Capitan, the Hellion and the Bone Machette.