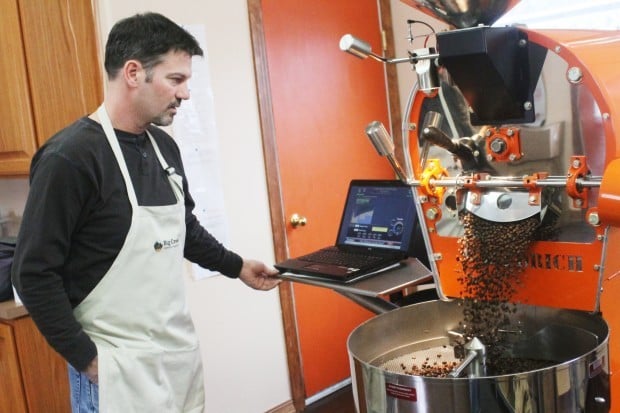 Randy Lint, owner of Big Creek Coffee Roasters, carefully watches his computer monitor as fresh-roasted coffee beans spill out of his roasting machine at his shop in Hamilton. The computer software allows him to control the temperature and air flow to the beans, among other things. 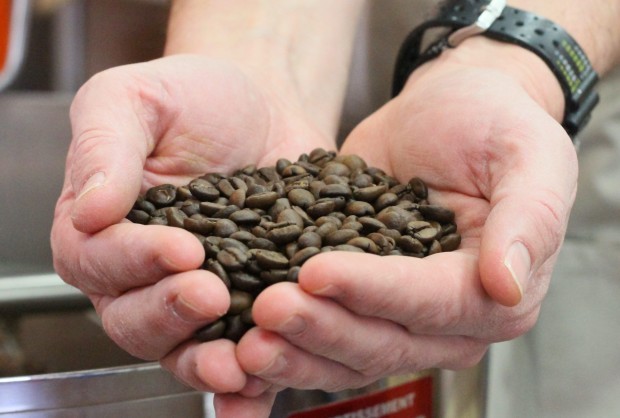 Lint displays some freshly roasted beans on Wednesday afternoon. They are medium roasted for espresso. Lint is hoping to become certified as an organic bean roaster, although he will still carry all types of premium coffee beans.
By DAVID ERICKSON - Ravalli Republic

Although he was a successful lawyer with a wife and two kids, there were two things Randy Lint didn't enjoy about his life: The everyday stresses of practicing law in a small town, and the inability to find a decent cup of coffee.

Last October, he finally took care of both nuisances by opening his own specialty coffee roasting business in Hamilton, Big Creek Coffee Roasters.

"I went from dealing with some pretty serious life-or-death situations to being a bright spot in people's mornings," he said on Wednesday, as he carefully watched the temperature on a fresh batch of roasted coffee beans. "It took courage and finances, but I finally was able to take that leap. Now, I own my own business and it's something I'm interested in and I enjoy. It's the American dream."

Lint has held several high-profile positions over the years, including Ravalli County Justice of the Peace, but he long dreamed of working for himself.

"Now I have the best smelling office in town," he laughed.

Coffee has always been a passion for Lint, going back to his days at law school in Boston. When he moved to Montana 20 years ago, he found that it was expensive and frustrating to get fresh-roasted beans, because he had to have them shipped.

"Fresh-roasted coffee is vastly superior," he said. "It has a lot more aroma and flavor. After a couple of weeks, coffee beans lose those things. People have become conditioned to stale coffee, because the national brands ship their coffee to supermarkets and that's what people are used to."

Rather than order his fresh-roasted coffee over the Internet and pay the expensive shipping costs, Lint decided he would just do it himself.

"I found that roasting coffee at home is not as insanely difficult or expensive as I had thought," he explained. "I started to educate myself about different growing regions and it's really fascinating."

Lint is highly selective when choosing his beans. He buys only premium-quality beans, and he focuses on places where he feels that the growers put the extra effort into their work.

"I focus on single-origin beans (coffee with a single known geographical origin)," Lint said. "I like to know exactly where it came from, right back to the specific farm."

For example, Lint found a type of coffee from Rwanda that is grown by war-widows from the Rwandan genocide.

"They formed a co-op after the genocide to make money because their husbands and sons were killed," he said. "They process this coffee themselves. They charge a higher price, but to me it's worth it because the story behind the coffee makes it more interesting than if it comes off a ship from Mexico or something."

Lint bought a state-of-the art coffee roasting machine from a manufacturer in Sandpoint, Idaho, and installed it in his remodeled shop. He uses a laptop with special software to monitor the controls, such as heat and air flow. He is able to control, with precise measurement, just how light or dark each batch gets roasted. If a customer likes how their coffee was roasted, Lint can save the exact parameters of that batch and roast it exactly the same for their next order.

"It's half art and half science," he explained. "This is the next generation of coffee roasting. It's fairly easy. Anyone can do it, but not everyone can do it well."

Lint says he has seen a very positive word-of-mouth response from his customers.

"I've met a lot of coffee snobs since I've started doing this," he said. "I've talked to people that don't even drink coffee who say that it smells amazing."

Lint said he is currently in the process of getting certified as an organic roasted coffee distributor, and he would eventually like to focus on home delivery.

"I would like to model my business after the old milk man model," he said. "You know how they used to leave a bottle of milk at your door every morning and they would take the old bottles. Eventually, I would like to deliver fresh coffee from Darby to Lolo, at your doorstep, for free."

Every batch of coffee is roasted after the customer places the order, and Lint said he is going to take a big risk by placing a roast date on each of his bags of coffee.

"Putting a date on each bag causes a lot of headaches," he said. "But I think it is important to ensure the highest quality product. I can't compete with national brands on price, but I can blow ‘em out of the water on quality and freshness."

Big Creek Coffee is available at several retail locations all over the valley, and takes orders online and ships to all 50 states. It also delivers coffee anywhere in Ravalli County for free, and gives out samples at the shop, located at 1091 S. First St. in Hamilton.

Reporter David Erickson can be reached at 363-3300 or david.erickson@ravallirepublic.com.

How to have financial flexibility

New job? The right thing to do with your 401k

New job? The right thing to do with your 401k

The business news you need

Get the latest local business news delivered FREE to your inbox weekly.

Randy Lint, owner of Big Creek Coffee Roasters, carefully watches his computer monitor as fresh-roasted coffee beans spill out of his roasting machine at his shop in Hamilton. The computer software allows him to control the temperature and air flow to the beans, among other things.

Lint displays some freshly roasted beans on Wednesday afternoon. They are medium roasted for espresso. Lint is hoping to become certified as an organic bean roaster, although he will still carry all types of premium coffee beans.
© Copyright 2021 Ravalli Republic, 232 Main St. Hamilton, MT | Terms of Use | Privacy Policy
Powered by BLOX Content Management System from TownNews.com.
You don't have any notifications.